Description: The colonies ( Fig. 1 View FIGURE 1 ) are totally incrusted with coarse sand and make balls several centimetres in diameter. The siphons are protruding, slightly flaring, with a light brown lining and white yellow stripes along their edge. The pigment of the stripes disappears after fixation. The individuals are parallel, linked by a large part of their lateral sides and by some bridges made by blood vessels, themselves coated with sand. As in other Plurella species   , large spaces occur between the zooids. These cavities are inhabited by a diversified fauna of polychaetes, small crustaceans, actinians, sponges, bryozoans, etc…

Zooid length may vary from 3 to 4 cm within the same colony. The tunic is thin, colourless, impregnated with sand throughout its thickness, and it is very difficult to extract the zooid bodies without damage. The body wall is thin, yellow to brown­red on the siphons, cream elsewhere.

The siphons are devoid of the sphincter normally found in other ascidian families. Their edge is smooth or slightly undulated but not denticulate; this appearance as seen in pictures of living colonies is due to pigments. The cloacal siphon opens at 1/3 of the body length ( Figs 2A View FIGURE 2 , 3 View FIGURE 3 AB, 4B) from the oral siphon. The oral tentacles are thin, widely spaced along one ring, and in two or three orders of length. Their number is highly variable, about twelve.

The entire lining of the oral siphon is raised in very small, dense papillae.

The circular prepharyngeal band, in two low blades, is dorsally curved in a V and extends posteriorly as a double dorsal lamina. A very small round dorsal tubercle is located in this V. Numerous accessory tubercles in urns are scattered all along the neural gland channel ( Figs 2B View FIGURE 2 , 4C View FIGURE 4 ). The neural gland and neural ganglion are joined at the base of the cloacal siphon.

The body wall is very different on each side. On the right side it is relatively tough and bears numerous, closely spaced, parallel transverse muscles extending from the base of the oral siphon to the posterior extremity of the body ( Fig. 3A View FIGURE 3 ). The right side of the body can be rather easily separated from the tunic except along the dorsal and ventral lines.

On the left side, the body wall is thin and brittle, except above the gut, gonads, and neural ganglion, where it is thickened and embedded in the sandy tunic. A dense network of blood vessels lies on the left side, with ramifications towards the gut and each gonad. A large vessel issuing midway down the ventral line penetrates into the thickened part of the tunic, as do some smaller vessels more posteriorly.

The branchial sac occupies the whole internal cavity of the body. The sac is inserted close to the peripharyngeal band and reaches the posterior end of the body wall. It is linked to the body wall by numerous trabeculae. Its structure is the same as in other Plurella species   , with straight, elongated stigmata ( Fig. 4A View FIGURE 4 ). A single fold, begins near the dorsal lamina against the peripharyngeal groove and extends along the middle of the left side of the branchial sac. The longitudinal vessels are numerous, regularly spaced, with a papilla at each crossing with the transverse vessels ( Fig. 4A View FIGURE 4 ). There are two stigmata in a mesh. The dorsal lamina is prolonged by a retro­pharyngeal crest from the bottom of the branchial sac to the oesophagus entrance.

The gut makes a closed loop, short and thick ( Fig. 2A,C,D View FIGURE 2 ). The oesophagus lies 2/3 of the way down the body length, just posterior to the cloacal siphon. It is extremely short, clearly delimited from the round stomach. The intestine is tubular, curved first into a closed loop followed by a short secondary curve directed forward. The anus opens widely in a large slit whose margin is slightly frilled. Between the stomach and intestine, inside the loop, lies a spherical body of dense, probably glandular tissue ( Figs 2A View FIGURE 2 , 4B View FIGURE 4 ). This structure has not been observed in other Plurella species.   The guts of all zooids were full; their structure was observed after they were emptied.

The male and female gonads of a zooid are far apart. The globular testis, is located against the heart granule and it has about the same size ( Figs 2A View FIGURE 2 , 3B View FIGURE 3 , 4B View FIGURE 4 ). The sperm duct was not observed. The ovaries are scattered along the middle of the body's left side, from the level of the oesophagus entrance to the base of the cloacal siphon ( Figs 2A View FIGURE 2 , 3B View FIGURE 3 , 4B View FIGURE 4 ). The ovaries are deeply included in the body wall and tunic; only the extremity of each oviduct opens into the cloacal cavity. The ovaries have an urn shape and are about 0.5 mm in length ( Fig. 2E View FIGURE 2 ). They form two groups, not well separated: one posterior to the cloacal siphon, the other along an antero­posterior line extending from the gut up to the neural ganglion. There are at least a dozen ovaries in a zooid, and all zooids in the same colony are at the same maturation stage. All ovaries are linked by branches of a large blood sinus, coloured in yellow in living animals. There was no indication of sperm duct ramifications linked to these ovaries.

Almost all zooids contained a shrimp of the family Pontonidae   and several nemerteans in the branchial sac.

Remarks: Plurella colini   n. sp. is the sixth species of the genus that Kott (1973) created and placed in a new family of Phlebobranchia: the Plurellidae   . In this family, all species have a very uniform aspect; with zooids joined in a massive colony deeply impregnated with sand, they form balls out of which protrude the extremities of gaping siphons. The species differ in the shape and location of the gut, and the distribution and number of gonads.

­ Plurella elongata Kott, 1973   . Contrary to the case in other species, the cloacal siphons are directed backwards, and the gut is located very posteriorly in the body and has an arc shape. There is a single testis, and several ovaries in a line. This species occurs in South and Western Australia ( Kott 1985).

­ Plurella testacea Monniot & Monniot, 2000   , collected in the Philippines, has a sclerified tunic without sand on the right side of the body. The gut forms an open arc. This species has a single testis vesicle and a single ovary.

­ Plurella kottae Monniot & Monniot, 1976   is present in the Philippines, Papua New Guinea, and Palau. The rim of the siphon is lobed. The gut loop is a single and closed curve. The testis is unique; the sperm duct has a branch with an enlarged extremity alongside each of the three to five ovaries.

­ Plurella monogyna Monniot & Monniot, 2000   has a large distribution: Philippines, Palau, and Papua New Guinea. The gut loop is closed; there is a single testis and a single ovary. The cloacal siphon opens anteriorly at 1/3 of the way down the body length. This species lacks the sclerified right side of the body found in P. testacea   .

­ Plurella melanesiae Monniot & Monniot, 2000   , from the Loyalty Islands has the cloacal siphon in an anterior position, a testis divided in several lobes, and two to four ovaries.

It is interesting to note that specimens belonging to the same Plurella species   but collected at far distant stations show no variations of their anatomical characters. This is confirmed for P. monogyna   and P. kottae   .

The Plurellidae   have a wide distribution in the tropical Pacific Ocean and Australia. Their habitat is littoral, on sedimentary bottoms, down to 100 m depth. These curious ascidians are probably more common than recent collections of individual colonies made by SCUBA diving might indicate. In addition, their sandy coating makes them cryptic and not easily seen on the field. Another species, different but immature, was also collected in Papua New Guinea, but the specimen is badly damaged and thus cannot be adequately described. Still, this shows that there may be additional species of Plurellidae   in the Pacific. They are presently unknown from other oceans. 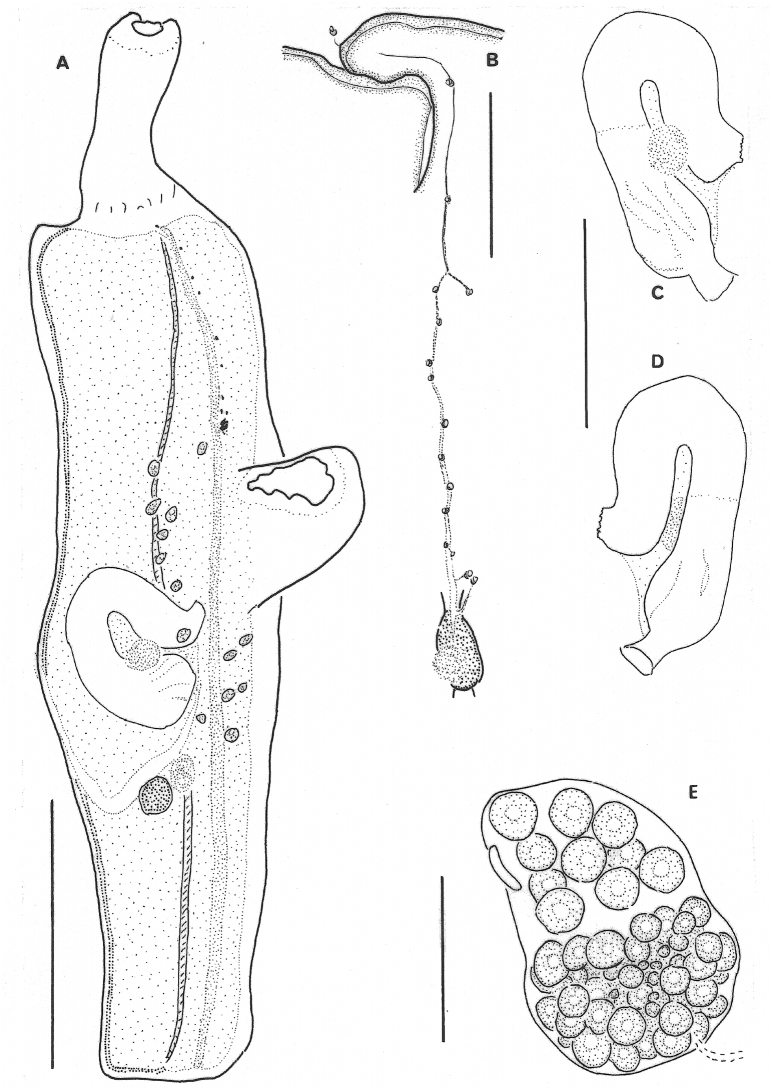 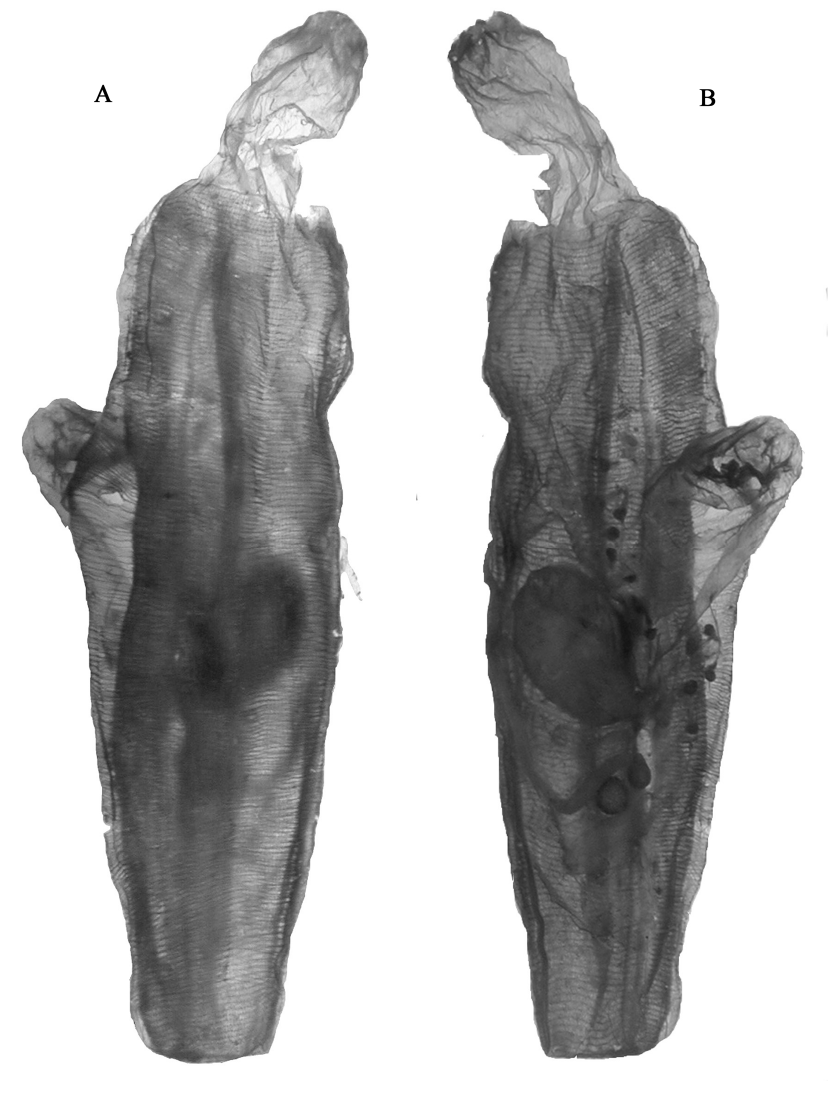 FIGURE 3. Plurella colini n.sp. A, right side of the body without tunic; B, left side. 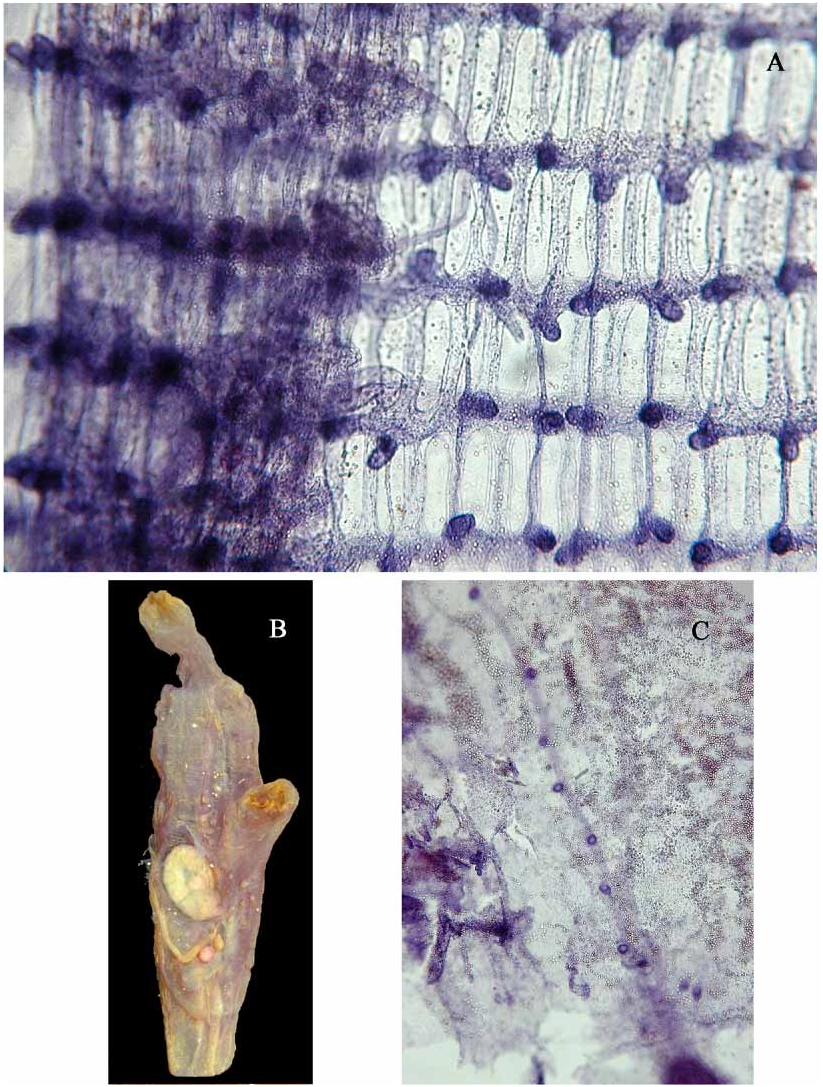