Diagnosis. Schistura musa   seems related to S. thavonei   with which it shares characters that distinguish them from all other species of the genus in Southeast Asia, like the very elongated body, with a marked hump behind the head (depth at dorsal-fin origin 6.2–8.1 times in its length) and the colour pattern including a pale stripe from the upper extremity of the gill opening to the upper half of the base of the caudal fin (not distinct in all specimens). The black pattern at the base of the caudal fin is made of two asymmetrical slanted marks, one on the base of each lobe, and in front of them a contrasted patch without any pigment extending from dorsal to ventral midlines. Other shared characters useful to distinguish them from other species of Schistura   are: male without suborbital flap; 8+7 branched caudal-fin rays; 7½ branched dorsal fin rays; 9–10 pectoral-fin rays; lateral line incomplete, reaching at most to above anal-fin base.

Schistura musa   is distinguished from S. thavonei   by its colour pattern. In S. musa   , the body is usually dull brown; most specimens do not have a clear pattern. Those with a pattern have 13–18 poorly contrasted and very irregularly shaped vertically elongated marks, on lower ½ to 2/3 of flank, from below dorsal fin to caudal-fin base; they become more contrasted posteriorly. In some specimens, a clear barred pattern is present, with 8–9 predorsal bars and 8–10 below and behind dorsal fin. In some specimens, the bars leave a pale stripe between their upper extremity and the darker dorsal midline. In S. thavonei   , the colour pattern is made of two broad dark brown stripes (one middorsal, one midlateral) and between them a pale yellowish-brown stripe from the upper extremity of the gill opening to the upper half of the base of the caudal fin; overimposed to the midlateral stripe, a row of 12–24 short black bars, located increasingly lower on the flank from head to tail, posteriormost ones restricted to the lower half of the body or forming blotches along the ventral midline of the caudal peduncle.

Description. See Figs. 10–11 View Fig View Fig for general appearance and Table 2 for morphometric data of holotype and 6 paratypes. An elongate nemacheilid with body depth increasing up to about midway between occiput and dorsal-fin origin, then decreasing until end of dorsal-fin base, then slightly increasing immediately behind dorsal fin, then tapering to caudal-fin base. Dorsal profile with a concavity between head and body and immediately behind dorsal-fin base. Head slightly depressed; body slightly compressed anteriorly to compressed posteriorly. Interorbital area arched, with a shallow groove above eye. In lateral view, eye flush with dorsal profile of head. Cheeks slightly swollen in holotype. Head and snout pointed in lateral view. Caudal peduncle, slightly tapering posteriorly, depth 1.6–1.8 times in its length. Low dorsal keel on posterior ¼ of post-dorsal area. Low ventral keel on entire length of caudal peduncle. Dorsal keel separated from caudal-fin base by a marked concavity. Largest recorded size 42.3 mm SL.

Body covered by scales except on belly in front of anus or pelvic-fin base. In largest specimens scales in predorsal area sparsely distributed, missing in smaller specimens. Scales deeply embedded. Lateral line incomplete, often interrupted, reaching between pelvic-fin base and middle of caudal peduncle (posterior extent increasing with size), with 40–91 pores (difficult to count with accuracy because of gaps). Cephalic lateral line system with 5–6 supraorbital, 4 + 9–10 infraorbital, 9 preoperculo-mandibular and 3 supratemporal pores.

Sexual dimorphism. None observed, but in holotype (largest specimen), the first branched ray of the pectoral fin is clearly thicker (especially the branches) than the other rays and than in other specimens. Thickened pectoral-fin rays are observed in males of many nemacheilids and are potentially sexually dimorphic in S. musa   too. No specimen with suborbital flap, groove or slit.

Coloration. After 6 weeks in formalin. Head and body background colour pale brown, throat, belly, lower part of caudal peduncle pale yellowish brown; except otherwise stated, markings darker brown. Head without pattern. In most specimens body without clear pattern. A row of 13–18 poorly contrasted and very irregularly shaped vertically elongated marks, on lower ½ to 2/3 of flank, from below dorsal fin to caudal-fin base; becoming more contrasted posteriorly ( Fig. 11 View Fig ). In four largest specimens, a clear barred pattern, with 8–9 predorsal bars and 8–10 below and behind dorsal-fin, wider than interspaces ( Fig. 10 View Fig ). Postdorsal bars wider than predorsal ones, and appearing as resulting from merging of several of the irregular marks of smaller individuals. Predorsal bars increasingly less distinct anteriorly. Postdorsal bars not reaching dorsal and ventral midlines. Anterior bars merged into colour of back. In some specimens, bars leaving a pale stripe between their upper extremity and darker dorsal midline ( Fig. 11 View Fig ). A wide inner axial stripe present on posterior half of body in some specimens.

Black pattern at caudal-fin base: last bar on caudal peduncle separated from caudal-fin base by a narrow yellowish space, leaving a vertical band devoid of any pigment. On upper half of base: a patch of black deep pigments on basal part of upper 4–5 principal rays and on last 2 procurrent rays (on rays only, not on fleshy base of fin). Anterior edge usually more posterior than that of patch on lower half of fin. On lower half: a patch of black deep pigments on basal part of lower 3–4 principal rays. A roundish spot of small black pigments at middle of base of fin, about ¼ of its depth, in two largest specimens merged with or overimposed on last bar of caudal peduncle ( Fig. 10 View Fig ). Posterior part of dorsal keel dark brown, leaving a vertical unpigmented patch running from concavity between keel and caudal fin, in front and/ or behind dark spot and to ventral mid-line.

Notes on biology. A dissected female ( CMK 24319 View Materials , 37.4 mm SL) had ovaries with white oocytes (estimated less than 50) and a few yellow ova about 0.7 mm diameter. A male ( CMK 24319 View Materials , 29.0 mm SL) had ripe testes; its stomach was filled with numerous small insect larvae. The largest sample was obtained at the mouth of a small tributary, 3–5 m wide, 20–50 cm deep, with moderate to fast current, over a pebble to stone bottom in an uninhabited area ( Fig. 14 View Fig ). In the same area, a single specimen was obtained in the Nam Ngiep itself, among stones along the shore. Two specimens were collected in a stretch where the river is wider, shallower and with a weaker current; the bottom was made of pebbles and stones, but was heavily silted with mud and stand, apparently originating from work in the river at construction sites or hydropower dam(s) upriver (Google Earth images dated 23 January 2014 [3 weeks before sampling] show clear-water tributaries entering a very turbid Nam Ngiep).

Distribution. Schistura musa   has been observed only in the middle Nam Ngiep ( Fig. 8 View Fig ); the sections upstream and downstream could not be sampled. It has not been observed in the reasonably well surveyed Nam Ngum drainage to the west and in the insufficiently sampled Nam Xan to the east.

Etymology. Musa is the genus name of the bananas (Musa spp.). A reference to the shape of the preserved specimens. A noun in apposition.

Conservation status. Schistura musa   was observed at three localities in 2014. It was observed in two tributaries of the Nam Ngiep in the area that will be flooded by the Nam Ngiep 1 reservoir; it is expected to be present further up in these tributaries, in stretches with low gradient, as well as in unsurveyed parts of the Nam Ngiep drainage. These streams could not be sampled further upstream because of access difficulties and serious security issues. Because of its apparent preference for stretches with relatively moderate current, S. musa   is not expected to reach very far upstream along these tributaries. It was also collected in the Nam Ngiep itself, above the maximum level of the reservoir (320 masl), but there the bottom of the river is covered by sediments apparently originating from construction work at the sites of Nam Ngiep 2 hydropower scheme and road construction. As a result, all known sites are or will be inundated or covered by sediments at least part of the year and the survival of the species at these sites is unlikely. It may still be able to survive in some still unsampled tributaries of the drainage but its presence first has to be demonstrated. However, these are small water bodies with limited flow and they are not expected to be able to support large populations of large adults. The sharp decrease in range, habitat quality and population size probably qualifies S. musa   to the Endangered or Critically Endangered categories under IUCN criteria (IUCN, 2001). 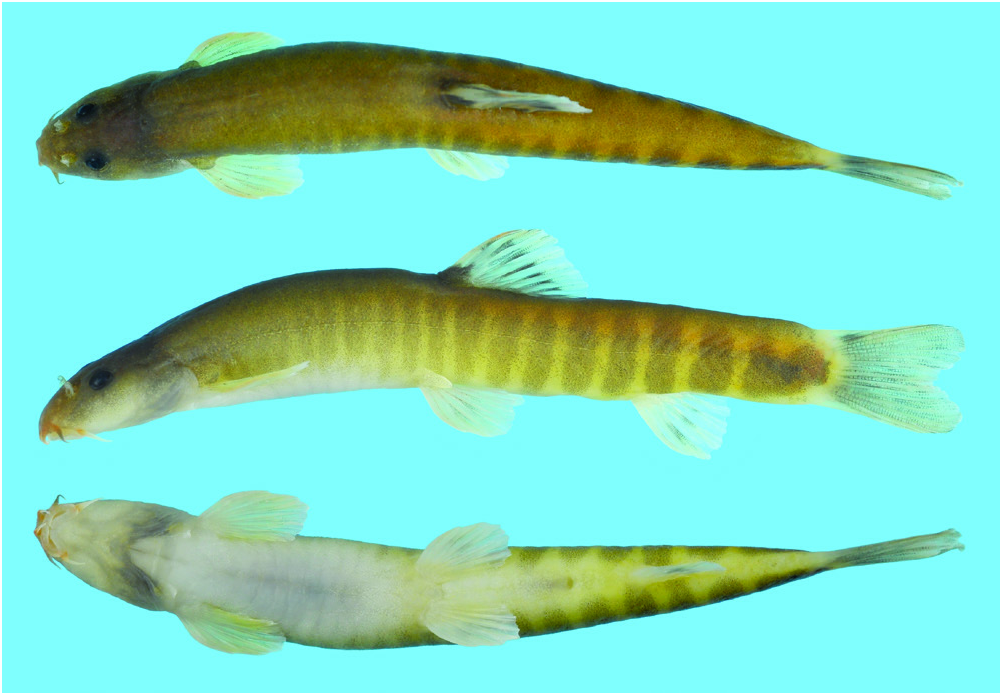 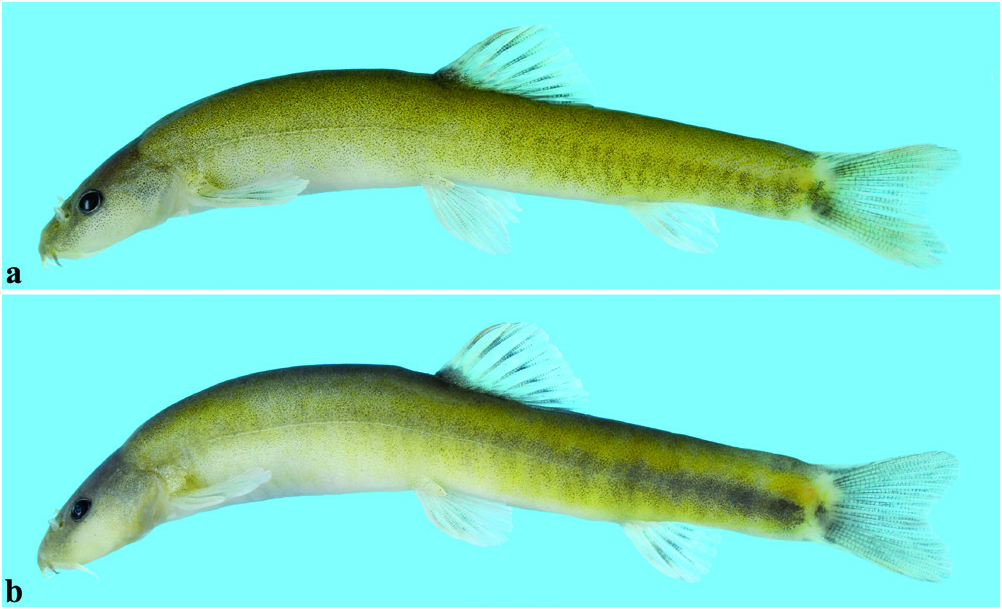 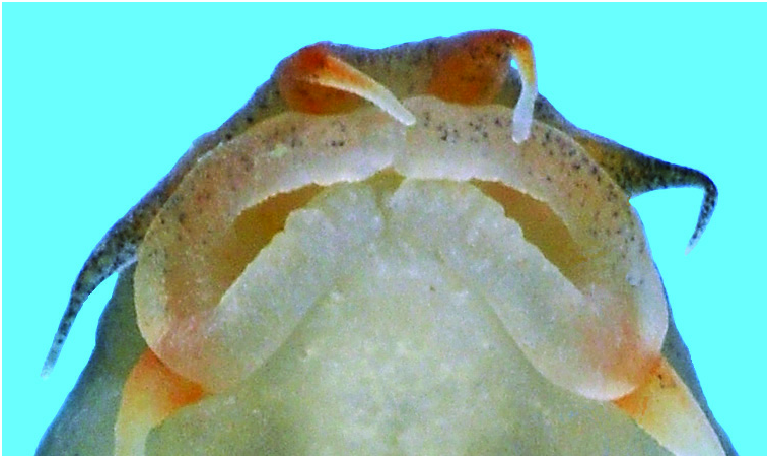