Calyptrochilum aurantiacum occurs between 240 to 600 m elevation in mature dense lowland forest (sometimes degraded), in plantations and in Gilbertiodendron dewevrei monodominant forest. It was initially collected growing as an epiphyte 35 m above the ground on the lower branches of a primary forest tree ( van der Laan and Cribb 1986). In 2017, we collected the species near the type locality on Desbordesia glaucescens ( Irvingiaceae ) and Scottellia sp. ( Achariaceae ) that had recently been felled to establish a new cocoa and banana plantation (Figure 2 View Figure 2 ). In the same locality, the species was also collected on kola and cocoa trees in a 7-year old cocoa plantation. Within and around the Banyang-Mbo Wildlife Sanctuary, it was collected in the canopy of large trees (i.e. Duguetia staudtii (Engl. & Diels) Chatrou ( Annonaceae ) and Klainedoxa gabonensis (Pierre ex Engl.) ( Irvingiaceae )).

Calyptrochilum aurantiacum is a heliophile epiphyte growing on branches of 5 to 20 cm in diameter under the canopy of large trees (from 50 to more than 100 cm diameter at breast high). In most observed trees (ten observations), Calyptrochilum aurantiacum was found growing together with the angraecoid orchid Diaphananthe plehniana (Schltr.) Schltr. and with the fern Microgramma owariensis (Desv.) Alston ( Polypodiaceae ) (Figure 3 View Figure 3 ). On Duguetia staudtii and Desbordesia glaucescens , we observed more than 100 individuals per tree. The flowering and fruiting of C. aurantiacum occur during the large rainy season, from May to November. 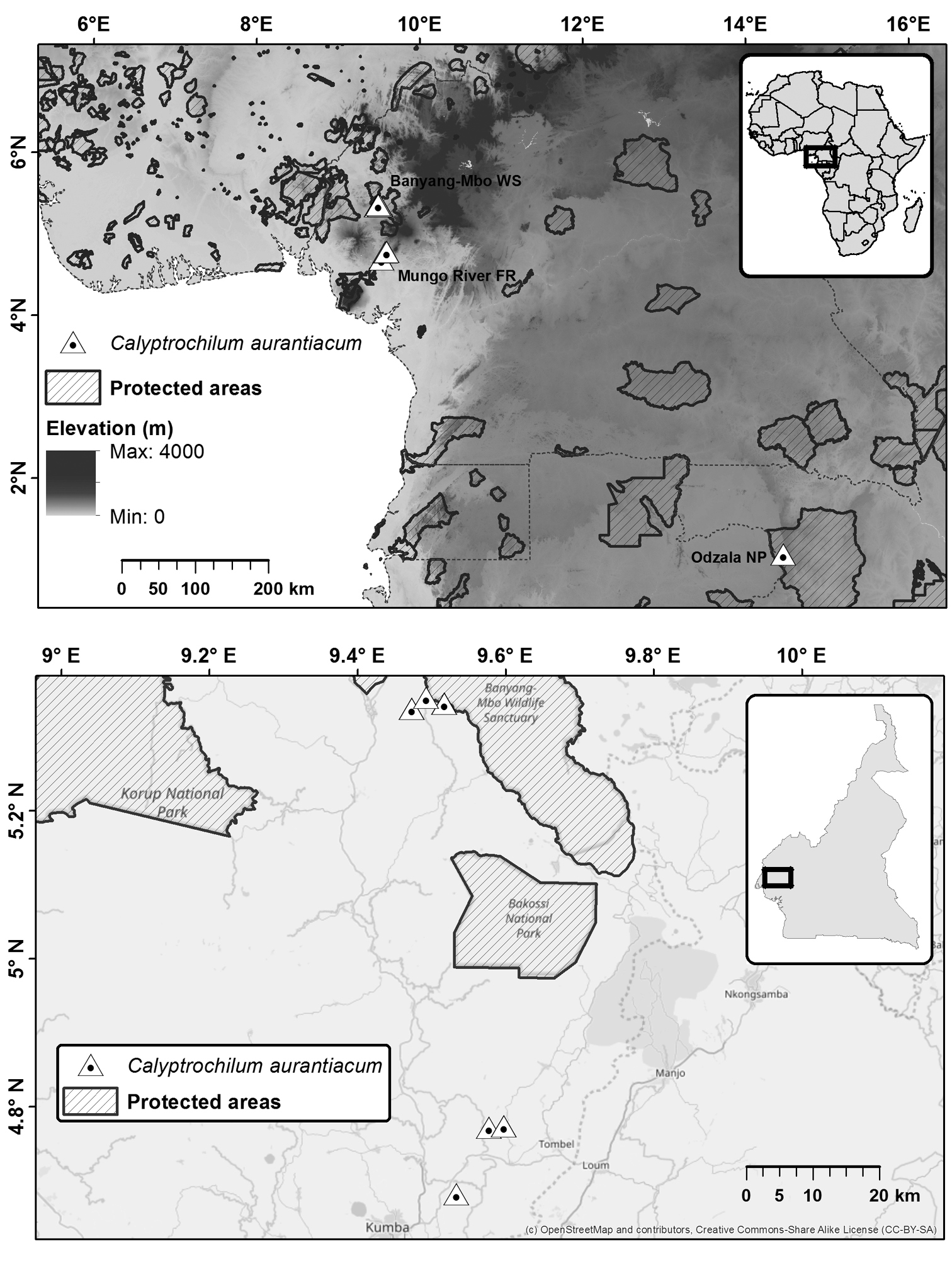 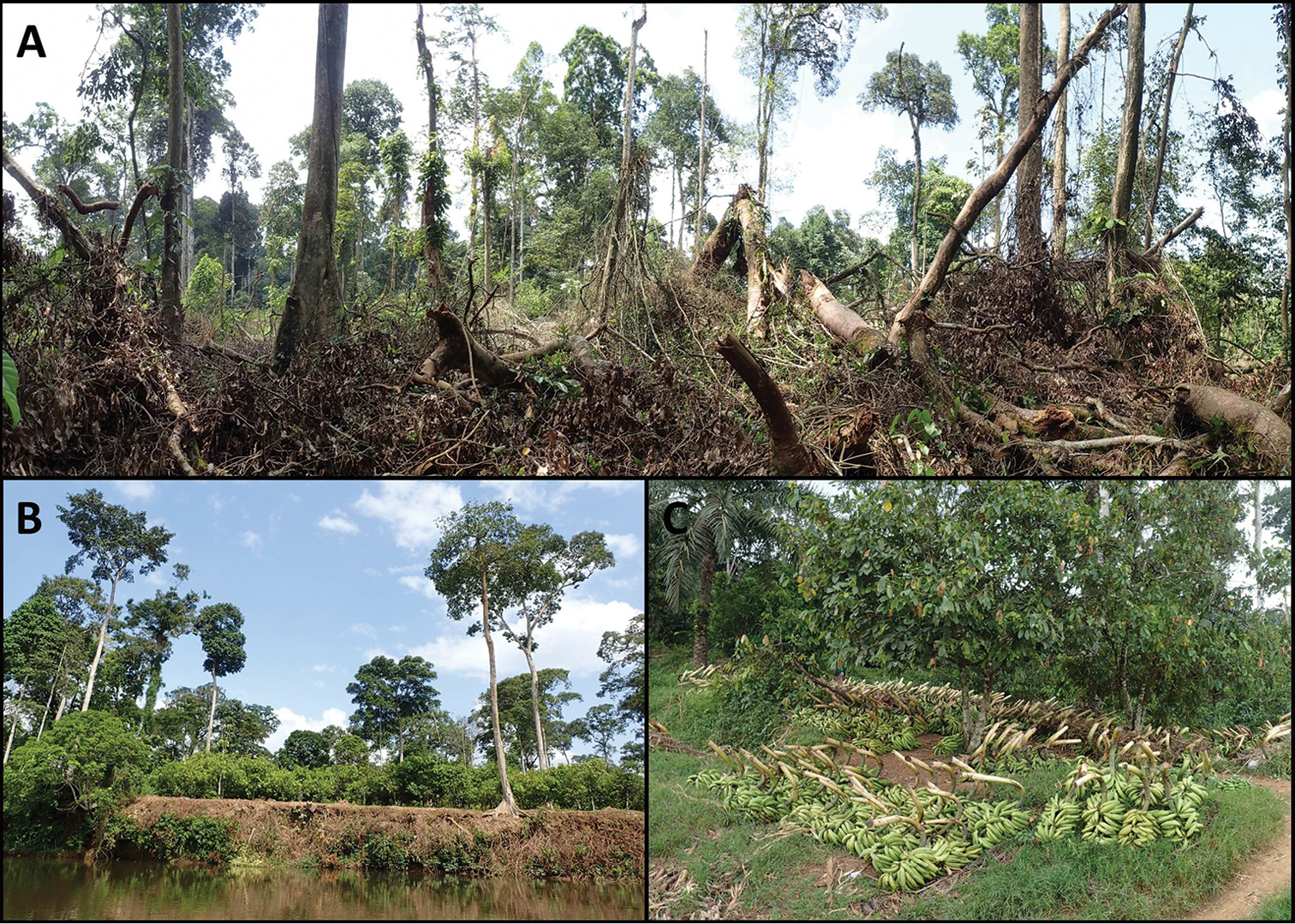 Figure 2. Habitat degradation and forest clearance at the type locality of Calyptrochilum aurantiacum (Mungo River Forest Reserve). In less than 10 years, hundreds of hectares of mature lowland rainforest have been converted to cocoa plantations along the Mungo River (pers. comm. by local communities). A Freshly cleared forest where plantain and bananas will be cultivated during two years prior to being replaced by cocoa trees. B A ten-year old cocoa plantation on the banks of the Mungo River; only a few shade trees remain from the original forest. C Plantain and banana bunches that are harvested every day along the Mungo River. Photographs by V. Droissart (June 2017). 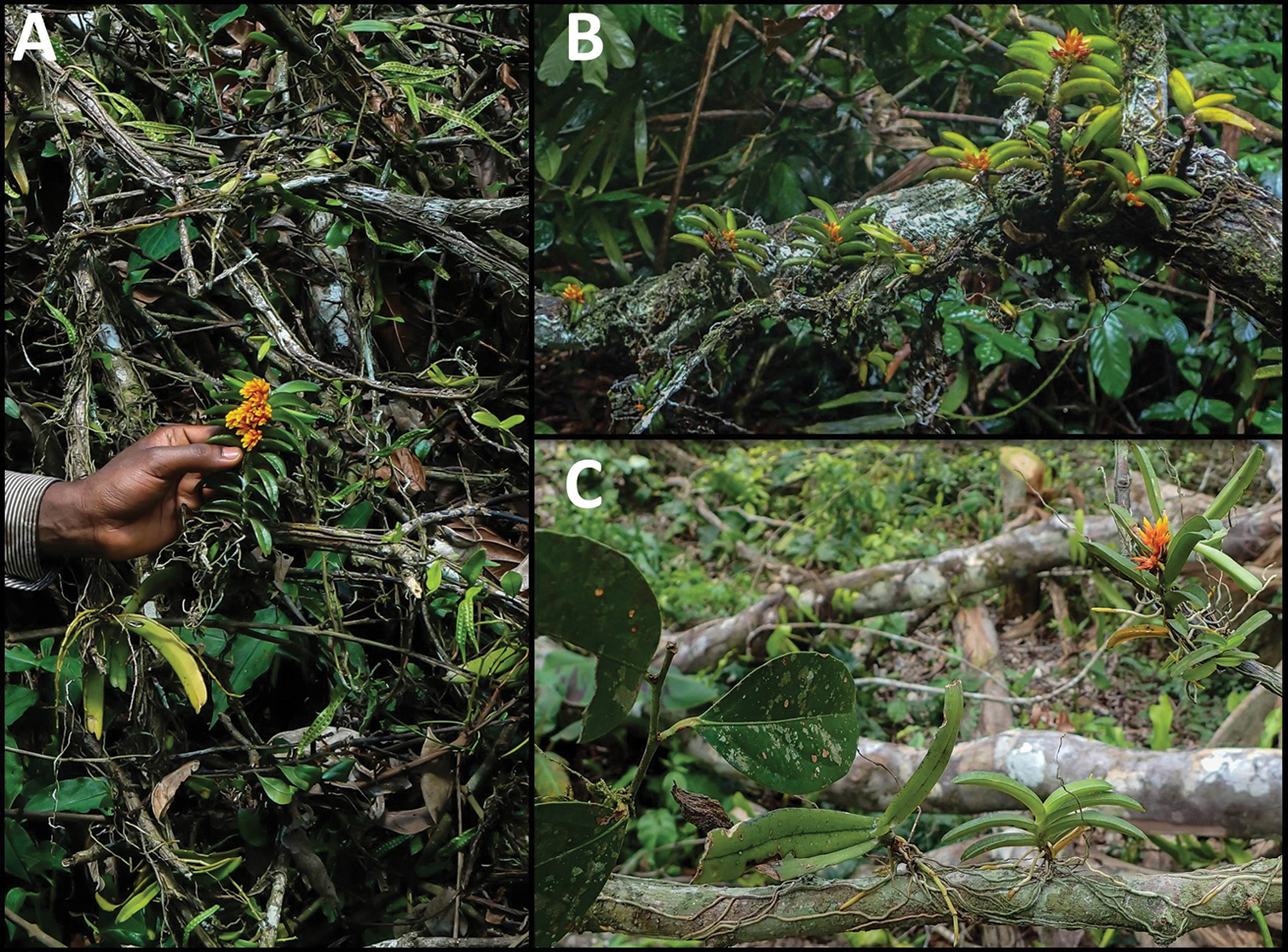 Figure 3. Ecology and habit of natural populations of Calyptrochilum aurantiacum. A Flowering individual growing on upper branches of a felled kola tree, along with the angraecoid orchid Diaphananthe plehniana and the fern Microgramma owariensis. B Dense population growing on 1 metre long branches of Duguetia staudtii. C Calyptrochilum aurantiacum and Diaphananthe plehniana growing side by side on Salacia sp. (Celastraceae). Photographs by V. Droissart (June 2017).