Intraspecific variation and taxonomic discussion. As described and illustrated by Arnaud (2002 a), the holotype of C. terrali  is a male with a tetratuberculate cephalic carina, with the two central tubercles being upright and taller than the laterals ones ( Fig. 11View FIGURES 7 – 11). One of the two males examined by us from Cláudia has an equivalent carina ( Fig. 9View FIGURES 7 – 11). However, the two other males (one from Carlinda and the other from Cláudia) have a pentatuberculate carina with the medial tubercle slightly indicated ( Fig. 7–8View FIGURES 7 – 11) (the lateral tubercles of the Carlinda specimen [ Fig. 8View FIGURES 7 – 11] are much more acute than those of the Cláudia specimen [ Fig. 7View FIGURES 7 – 11]). As the two forms (i.e., the tetra- and pentatuberculate carinae) are sympatric and no other distinction was seen by us, we believe that they are just an intrapopulational variation and are not evidence of the existence of two distinct species.

Edmonds & Zidek (2010) suggested that the holotype of C. terrali  could have been a teratologic form or individual variation within a population of C. dardanus  . Nevertheless, we discard this hypothesis due to the existence of a second male with the same form as the holotype and two other males with similar carinae (despite being pentatuberculate) occurring in the same area (the municipalities of Sinop, Carlinda and Cláudia in northern Mato Grosso), and by the absence of C. dardanus  or any other species of the dardanus  group there. In addition, the two females examined by us (both from Cláudia) have a trituberculate cephalic carina ( Fig. 10View FIGURES 7 – 11), while females of C. dardanus  have it widely bidentate, with apical margin between the teeth widely raised and weakly angulate. The difference in the relative dimensions of the frons and clypeus (length of clypeus about equal to that of frons in C. dardanus  , while greater than that of frons in C. terrali  ) also distinguish these two species.

Another species widely distributed throughout northern South America that closely resembles C. terrali  is C. telamon  . Males of both species are easily distinguished by differences in the cephalic carina: the latter has a very long and usually strongly inclined middle process that little resembles the tuberculate carina of C. terrali  (see fig.

220–222 of Edmonds & Zidek). On the other hand, the females of both species are indistinguishable; it is only possible to separate them in association with males.

We found no difference between C. terrali  , C. dardanus  and C. telamon  in the shape of the genital capsule (as indicated by Arnaud [2002 a]) although we have seen a remarkable variation within C. terrali  : in both Claudia males, the ventral lamella of the left paramere overlaps the right paramere ( Fig. 13View FIGURES 12 – 13), while in the Carlinda male the opposite occurs and the ventral lamella of the right paramere overlaps the left paramere ( Fig. 12View FIGURES 12 – 13). We did not observe this second form in any other specimen of Coprophanaeus  .

The distribution map shows that C. terrali  is not sympatric (i.e., was not collected together) with the two species with which it most resembles, C. dardanus  and C. telamon  ( Fig. 14–15View FIGURE 14View FIGURE 15). All certain collecting localities for C. terrali  (the Carlinda specimen—the northern red dot on the map - was retrieved from a student collection and there are no geographical coordinates on its label) represent regions quite far from big rivers (inner terra firme forests) in the Juruena-Xingu interfluvium, a region characterized by irregular topography and higher altitude in relation to nearby localities for C. telamon  and C. dardanus  , where terrains are flatter, and closer to big rivers (varzea or near varzea forest). In any event, it is likely that these rivers and associated plains are strong barriers that isolate C. terrali  localities from those for both C. telamon  and C. dardanus  , strengthening the validity of C. terrali  . In this context, C. telamon  is limited, in northern Mato Grosso, to west Juruena (maybe present in the eastern plain also) and north of lower Teles Pires River (however passing Juruena much farther south), C. dardanus  east of Xingu River (also in western varzea), and C. terrali  in higher lands between these three rivers ( Fig. 15View FIGURE 15).

Although we have positioned C. terrali  in the dardanus  subgroup, we agree with W. D. Edmonds (personal communication) that this classification into subgroups is still tentative. In fact, Edmonds & Zidek (2010) observed that the dardanus  group is the most tenuous group of Coprophanaeus  s. str., “and it may later benefit from being split into at least two separate species groups ”.

Bionomics. There are no bionomic studies published on C. terrali  . Label data indicate that three specimens from Cláudia were collected on human feces and the forth specimen from the same locality was caught in a mist net. Judging by the feeding habits of the other Coprophanaeus  , we believe that this species certainly should also be attracted by carrion. Months with collection records are February, March, June and October. 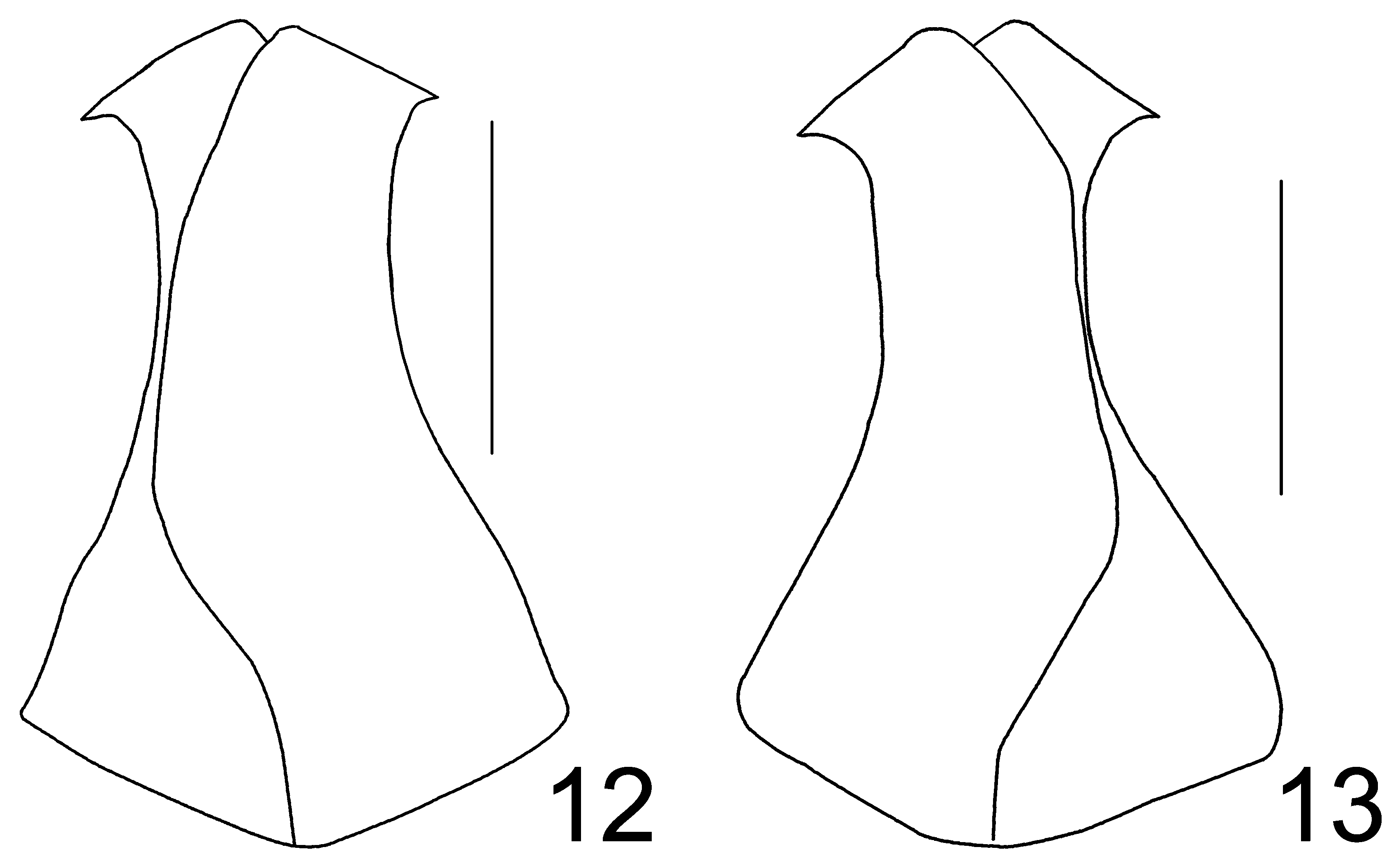