Etymology. The species is named after the type locality – Sardinia Island, Italy.

The drawings were made by tracing the photographs.

Male antenna ( Fig. 1View FIGURES 1 – 9) short, nearly reaching the abdomen. First flagellomere slightly broader than following ones; f 1 1.5–1.8 times longer than f 2 and 2.1–2.7 times longer than pedicel. Flagellomeres decrease in length from the 1 st to the 4 th one and increase in length distally starting from the 5 th one. Verticils three to four times as long as pubescence. First flagellomere has some flattened setulae (better expressed in females) near the base, visible only under high magnifications (e.g. x 40).

Female antenna ( Fig. 2View FIGURES 1 – 9) rather distinct, with f 1 and f 2 fused. The compound formation about 2.4 times as long and 2 times as broad as the third flagellomere. The latter and following segments cylindrical, increasing in length distally, with verticils two to three times as long as pubescence. Female fused element is covered with peg-like and flattened setulae ( Fig. 2View FIGURES 1 – 9), this feature being similar to that reported in T.(S.) antennata Starý  and several other species ( Starý, 1999).

Wing tinged with brownish, veins brown. Sc covered with setae all along its length both dorsally and ventrally. R 2 + 3 + 4 shorter or sub equal to R 2 + 3. Rs with numerous setae both dorsally and ventrally. Discal cell narrow, triangular in shape ( Fig. 3View FIGURES 1 – 9), 2.4–2.6 times as long as wide. Vein bM 1 + 2 almost half of mM 1 + 2. A 2 dorsally covered with macrotrichia up to the bend, and is situated close and parallel to the wing margin.

Remarks. The correspondence of males to females was established by general body coloration, triangular d-cell and similar shape of tarsal claws. Moreover, only specimens of T. (S.) annulata Meigen  , T. (S.) rufescens Edwards  and T. (S.) saltator (Harris)  were present in the studied material from Sardinia and all of these species are clearly distinct from T.(S.) sardiniensis  sp. nov.

The new species resembles T. (S.) antennata  most of all by short peg-like setulae on fused and enlarged female flagellomeres and general shape of the ovipositor. First flagellomere is also quite similar in males of both species by the form and peg-like setulae. On the other hand, T.(S.) sardiniensis  sp. nov. differs from T. (S.) antennata  by the form of female genital fork and by having only two bristles on supragenital plate. It also differs by males having distinct projection at inner base of gonostyles, almost straight IX sternite, different aedeagal complex and comparatively short, less curved tarsal claws. Finally, both males and females of T. (S.) sardiniensis  sp. nov. have no setae on pleurons contrary to the state in T. (S.) antennata  . 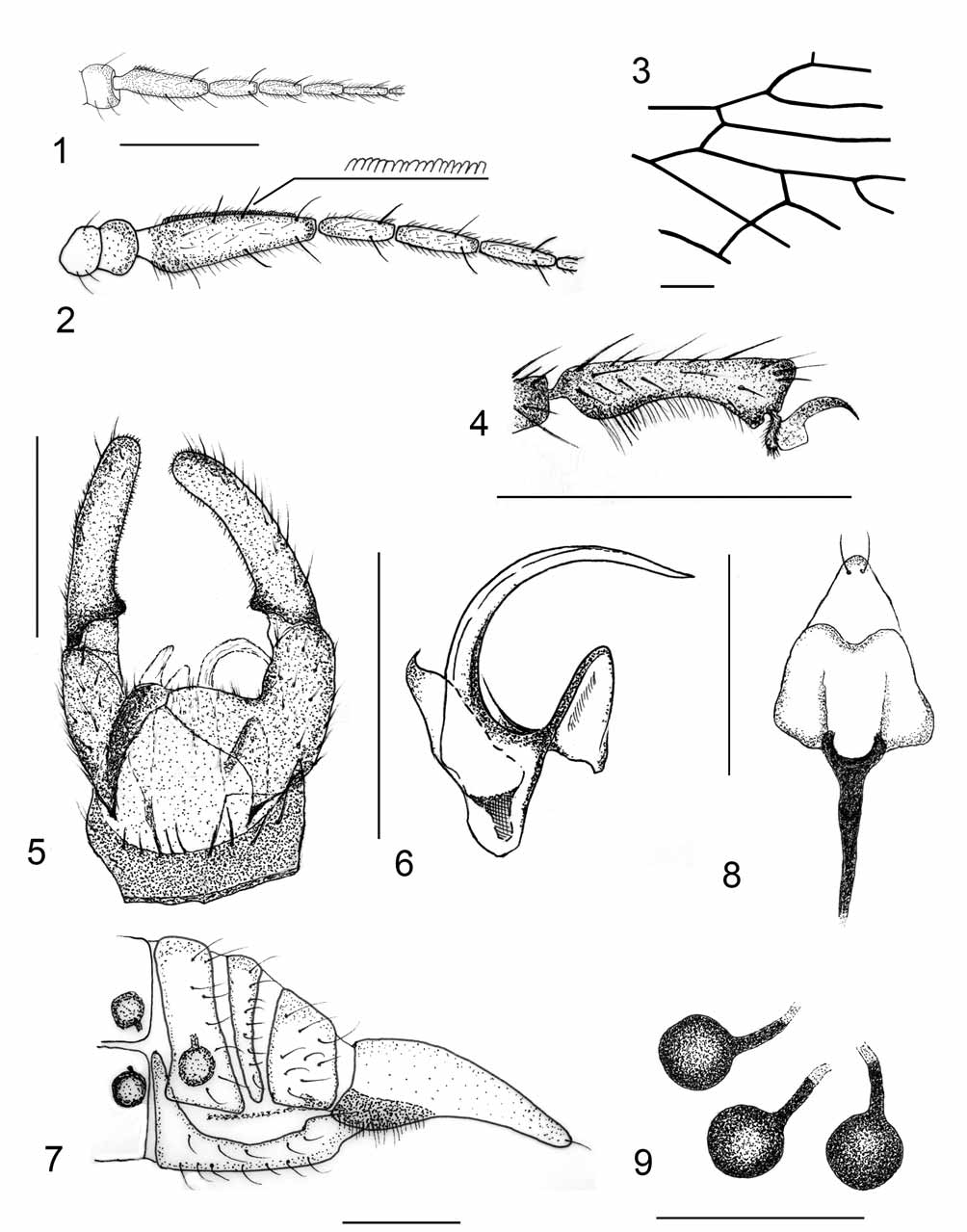