Phylogenetic analysis and comparisons. The topology of ML and Bayesian phylogenetic analyses based on the 2,438 bp of concatenated genetic markers revealed that material from Taiwan are three well recognized species. Gymnothorax mucifer   is sister to G. niphostigmus   while G. kidako   is a sister taxon of the other two species ( Fig. 6 View FIGURE 6 ). The inter- and intra-species K2P genetic distances based on 647 bp COI fragment are 5.7–7.8% and 0.2–0.8%, respectively ( Table 3). The high inter-species genetic distances which far exceed the intraspecific variation of moray eels (1.0–1.6% in average and maximum to 3.7%; Reece et al., 2011; Huang et al., 2018b) also support the recognition of three valid species. In each clade, color patterns of lower jaw and posterior tail are consistent and therefore used as diagnostic characters.

The holotype (USNM 50868) of G. mucifer   is well preserved and its color pattern is in good condition as originally described ( Fig. 2 View FIGURE 2 ). It has dark brown background and pale spots scattered evenly on head, grading into snowflake-like patches on trunk, and more rounded and farther apart on tail. The white margin on the anal fin is interrupted by serial pale blotches on posterior part of tail although the damaged tail may bring uncertainty (Dr. D.G. Smith, pers. comm.). Pale spots are scarcely perceptible on lower jaw and snout. Dentition and vertebral formula were not available in the original description, but recently provided by Böhlke & Smith (2002). Teeth uniserial, six in each side of peripheral intermaxillary, three in median intermaxillary, 15–16 in maxillary, 10 in vomer and 23–24 in dentary. The vertebral formula is 5–53–123+. Although there is no sequence available from Hawaii, the type locality of G. mucifer   , all specimens from Hawaii identified as G. “ kidako   ” and those from Taiwan fit the diagnosis based on the holotype of G. mucifer   and can be well distinguished from G. kidako   .

Gymnothorax mucifer   differs from G. kidako   by having a plain lower jaw (vs. mottled), white margin of the anal fin with serially pale blotches on the posterior part of tail (vs. continuous to the tip of tail), more dentary teeth (17–27 vs. 16–20), and fewer total vertebrae (130–141 vs. 140–143) ( Table 2, Fig. 5 View FIGURE 5 ). Color patterns on lower jaw and posterior part of tail are reliable characters to separate G. mucifer   from G. kidako   even though blotches on body are quite variable in both species ( Figs. 1 View FIGURE 1 , 5 View FIGURE 5 ). The total vertebrae of G. mucifer   and G. kidako   are discrete in Taiwanese specimens (130–138 vs. 140–143) but slightly overlapped after including the Hawaiian specimens ( Table 2). The Hawaiian G. mucifer   tend to have slightly more vertebrae than the Taiwanese material. Böhlke & Randall (2000) noted that some Hawaiian muraenids had more vertebrae than usual depending on habitat difference or genetic isolation. Similar to the vertebral formula, the number of dentary teeth is discrete and can be used to separate the Taiwanese specimens into two species (21–27 in G. mucifer   vs. 16–20 in G. kidako   ) ( Table 2).

Among our examined material, a specimen identified as G. “ kidako   ” from Society Island (BPBM 31625, 900 mm TL) was not able to be identified to either species of Gymnothorax   . This specimen is similar to G. kidako   in having pale spots on body and continuously white margin of anal fin extended to tip of tail, but its dentition and plain lower jaw and snout are similar to G. mucifer   . Furthermore, this specimen differs from both species by longer snout (4.2 in HL), the beginning of dorsal fin slightly anterior to gill opening, and significantly more vertebrae (VF 6–58–149) ( Table 2). In addition to morphological characters, this specimen was collected from 350 m depth, a deepest record of G. “ kidako   ”. However, G. kidako   is a common species abundant in shallow water according to local Japanese records and its reproduction behavior has also been reported at a shallow depth of 12 m in Sagami Bay, Japan ( Moyer & Zaiser, 1982). It is not common for a muraenid to have such a wide vertical distribution. Further study is needed to confirm the identity of this specimen.

Sexual dimorphism in dentition. Sexual dimorphism in the dentition has been reported in several muraenids ( Hatooka, 1986; Smith et al., 2008). Females and juveniles have more maxillary and dentary teeth than adult males and long inner maxillary teeth are lost in adult males. In our examined G. mucifer   , all specimens less than 431 mm TL have inner maxillary teeth. But in specimens longer than or equal to 431 mm TL, only females have inner maxillary teeth except that one male (576 mm TL) has one on left side. There are two mid-sized male specimens (332 and 402 mm TL) with embedded inner maxillary teeth, implying a transformational stage of dentition. In addition, only immatures shorter than 339 mm and females have an additional peripheral row of small teeth outside the 3 rd –5 th anterior dentary teeth ( Fig. 4 View FIGURE 4 ). The dentition of G. mucifer   is roughly consistent with previous studies on other sexually dimorphic morays. Adult male does lose some rows of teeth, but numbers of teeth of the remaining rows in adult males are not lower than those of females and immatures. FIGURE 6. Topology of maximum likelihood and Bayesian phylogenetic analyses based on GTR + Γ + I model of the concatenated genetic marker (2,438 bp) with Uropterygius macrocephalus as outgroup. Numbers above nodes are support values of bootstrap of 1,000 replications (left) and Bayesian probability (right). Only support values of main nodes for interspecies are showed. 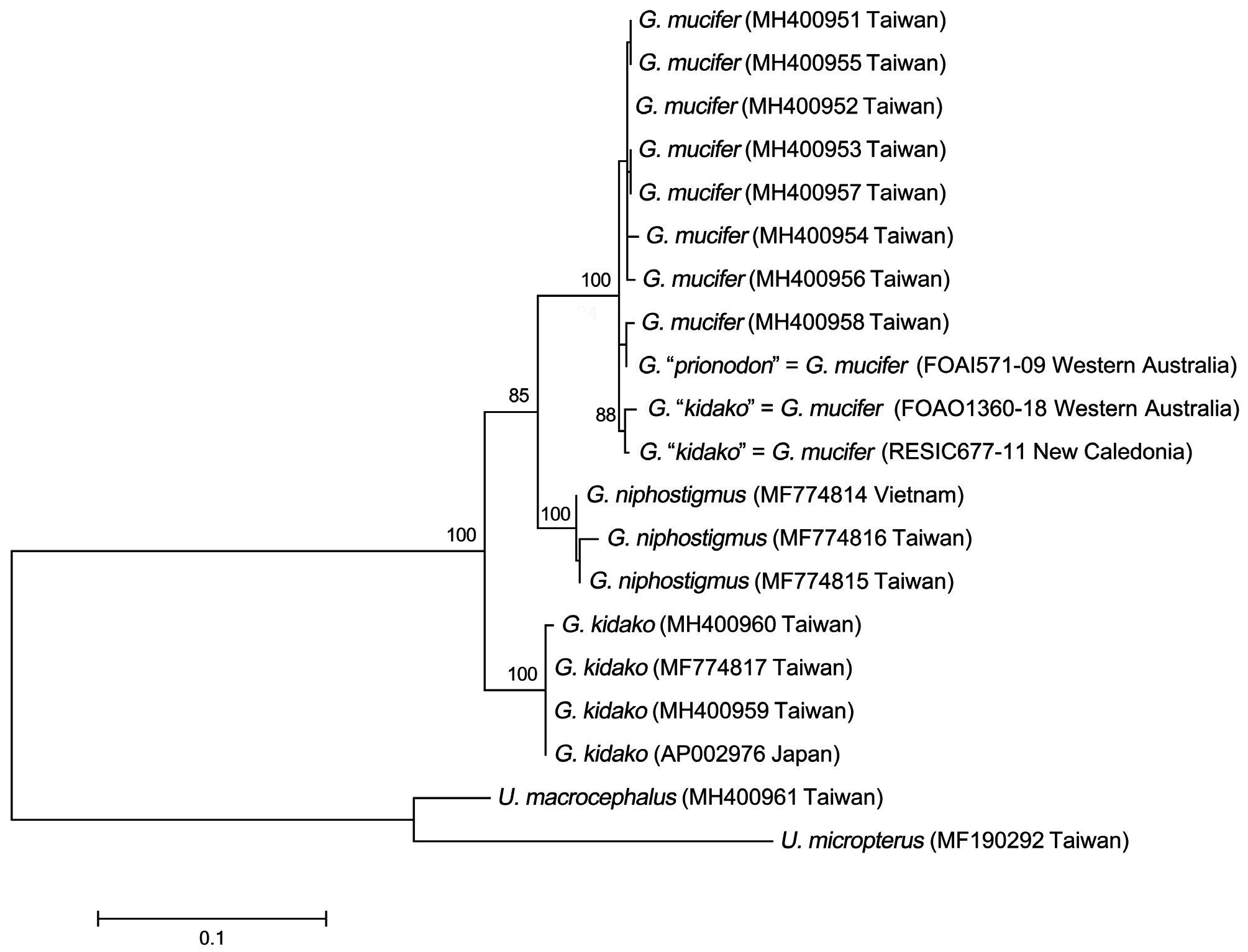 FIGURE 7. The maximum likelihood tree based on HKY + I model of the partial COI gene sequence (647 bp) with Uropterygius macrocephalus and U. micropterus as outgroups. Numerals beside the internal branches are bootstrap values. Bootstrap values below 80 are not shown.