Etymology: A noun in apposition, in reference to the type locality, Parque Nacional do Catimbau   .

Anterior dorsal scales cycloid, smooth and imbricate, wider than long or irregular in size, becoming longer than wide and rounded posteriorly at the level of fifth row and then progressively changing to hexagonal, slightly keeled and mucronate until the level of leg insertion; 40 regularly transverse rows between interparietal and posterior level of leg insertion; 19 scales around midbody. Lateral neck scales smooth, cycloid, imbricate; the uppermost rows being larger and higher than long; other lateral neck scales smaller, irregular in size and shape and disposed in two irregularly longitudinal rows. Flanks with a ventrolateral row of smooth, imbricate and elongate scales with approximately the same size as dorsals. Above it, two irregularly longitudinal rows of subrectangular enlarged scales.

Preanal region with four scales ( Fig. 2 View FIGURE 2 ), the two lateral ones larger than and separated on the midline by centrals, which are longitudinally in contact. Four preanal pores. Dorsal part of tail with slightly smaller scales than posterior dorsals but keeled and strongly imbricate. Other parts of tail identical to their corresponding parts of the body. Differences between dorsal, lateral, and ventral scales of tail disappear gradually towards tip of tail.

Forelimbs absent. Hindlimbs reduced to a needle-shape vestigial leg bud covered by five scales from the base to the tip; nail absent.

Dorsal surface of body and tail light brown with a regular series of transverse darker dots corresponding to the posterior part of dorsal scales. A wide lateral dark brown stripe, formed by a highly irregular reticulate pattern and decreasing ventrally in conspicuity, extends along head, body, and tail from nasal to tip of tail. Ventral parts of head and gular region cream with an irregular dark brown reticulum. Ventral parts of body cream with a transverse series of dark brown dots, larger than dorsal ones. Tail color identical to body except ventrally where occasionally there are some dark spots, all the rest immaculate. Limb buds light brown dorsally with a reticulate pattern identical to that of lateral stripe; ventrally immaculate.

Variation: Males are slightly smaller and have slightly longer tails than females: maximum SVL for males and females were 48 mm and 53 mm, respectively. SVL varied respectively in males and females from 1.04 to 1.15 and 1.06 to 1.36 times tail length (r 2 males 0.99, n = 4; r 2 females 0.84, n = 4). No sexual differences were found in squamation. Variation in meristic characters (n = 19) was the following (mean and standard deviation, respectively, in parenthesis): dorsal rows, 39–41 (40.1 ± 0.65); ventrals 32–34 (33 ± 0.66); scales around midbody 15–19 (17.7 ± 1.04). Like the holotype, all specimens have two supraciliaries and one subocular, except for MZUSP 98074, with two suboculars. Likewise all the specimens have five supralabials, four infralabials, and seven gular rows, except for MZUSP 98075 which has eight. Four preanal pores are present in all males examined; they are absent in females. The styliform hindlimb is covered by five scales in all specimens. The color pattern of males and females is very similar except in adult males where ventral surfaces are characteristically reticulated with dark brown whereas in adult females and juveniles ventral surfaces are immaculate.

Distribution and natural history: The Parque Nacional do Catimbau   ( Fig. 4 View FIGURE 4 ) was recently created to protect the habitats included in or surrounding the highly eroded plateau of Silurian-Devonian sedimentary deposits of Tacaratu formation ( Projeto RADAMBRASIL 1983; CPRM 2005) in the Caatingas of State of Pernambuco. The area, with about 62,000 hectares, consists of extensive arenitic and conglomerate outcrops of the plateau and areas of accumulation of sandy soils resulting from its erosion ( RADAMBRASIL 1983). Sandstones are irregularly capped with conglomerates which gives some protection from erosion. The plateau, with elevations varying between 700 and about 1000 m, is highly dissected at the borders ( Fig. 5 View FIGURE 5 A) and predominantly covered by a xeromorphic Caatinga vegetation. Plant families dominant in the area are the Euphorbiaceae   , Caesalpiniaceae   , Myrtaceae   , Mymosaceae, Fabaceae   and Cactaceae ( Gomes et al. 2006)   . Although less abundant, the Bromeliaceae   are also characteristic either in the outcrops or in the sandy soils; in the latter habitat the caroá ( Neoglaziovia   sp.) is particularly frequent ( Fig. 5 View FIGURE 5 B). On sandy areas vegetation cover consists basically of scattered thickets of variable size with a dry, and thin leaf litter generally concentrated at the basis of trees and bushes and separated by spaces of bare sand ( Fig. 5 View FIGURE 5 B). At some places near the lower slopes of the highly eroded plateau where water is more abundant vegetation is higher and evergreen, and a denser and humid leaf litter is present. Annual mean temperatures and precipitation in the area are 26 o C and 600 mm, respectively; most of the rain falls between April and June ( Nimer 1979; Gomes et al. 2006).

All specimens of Scriptosaura catimbau   were found on the slopes of the northern border of the plateau, while searching among the leaf litter around vegetation thickets in the sandy areas. They were always found buried in the sand a few centimeters below surface. When exposed they always tried to escape with fast sand swimming movements below sand. Although we obtained only 19 specimens, several escaped; the characteristic tracks left in the sand ( Fig. 5 View FIGURE 5 C) suggest that the species is very abundant in the area. The presence of recent tracks during the day in areas previously searched for specimens and where tracks had been absent suggest diurnality. The presence of several small juveniles in our sample indicates their recent eclosion. Other lizards obtained in the area were the tropidurids Tropidurus cocorobensis   , Tropidurus hispidus   , and Tropidurus semitaeniatus   , the iguanid Iguana iguana, the gymnophthalmids Acratosaura mentalis   , Anotosaura vanzolinia   , Micrablepharus maximiliani   , and Vanzosaura rubricauda   , the teiids Ameiva ameiva, Cnemidophorus ocellifer   and Tupinambis merianae   , the gekkonids Hemidactylus brasilianus   , Phyllopezus pollicaris   , and Phyllopezus periosus   , and the scincid Mabuya agmosticha   . 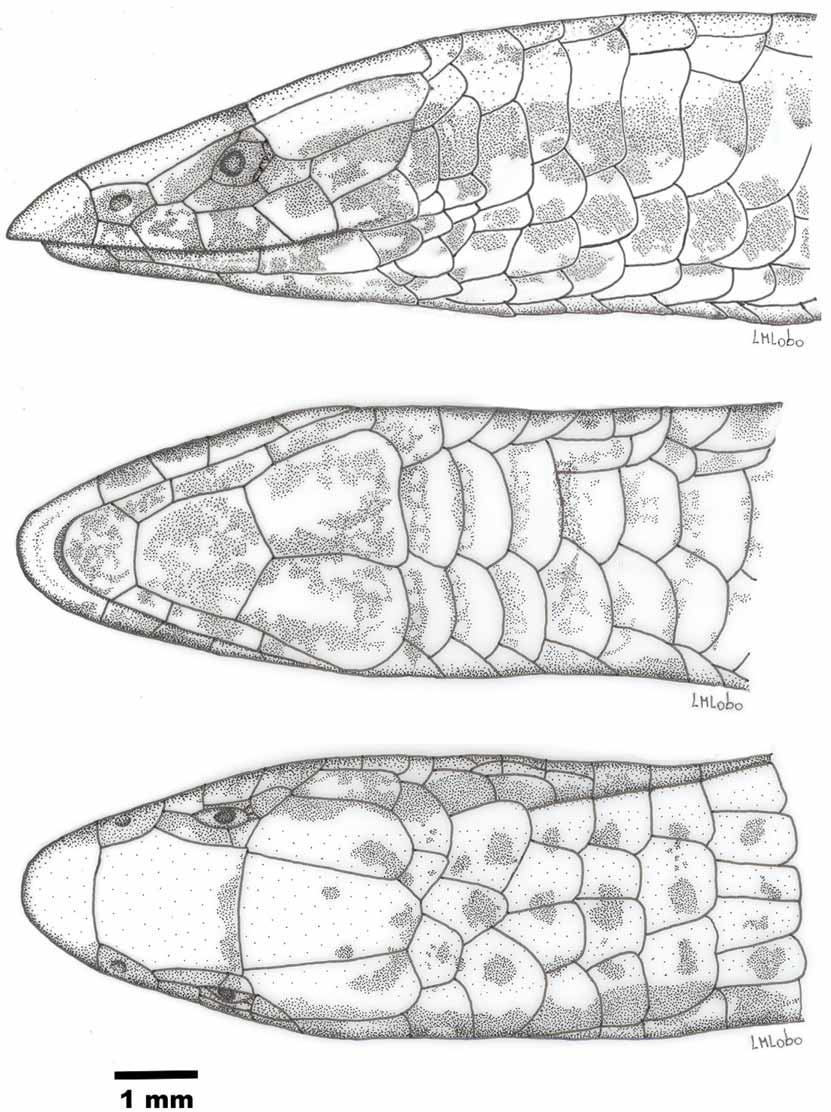 FIGURE 1. Lateral, ventral, and dorsal views of the head of the holotype of Scriptosaura catimbau (MZUSP 98059).

FIGURE 1. Lateral, ventral, and dorsal views of the head of the holotype of Scriptosaura catimbau (MZUSP 98059).

FIGURE 2. Ventral view of the hindlimbs and preanal region, and a schematic view of the midbody scalation of the holotype of Scriptosaura catimbau (MZUSP 98059). 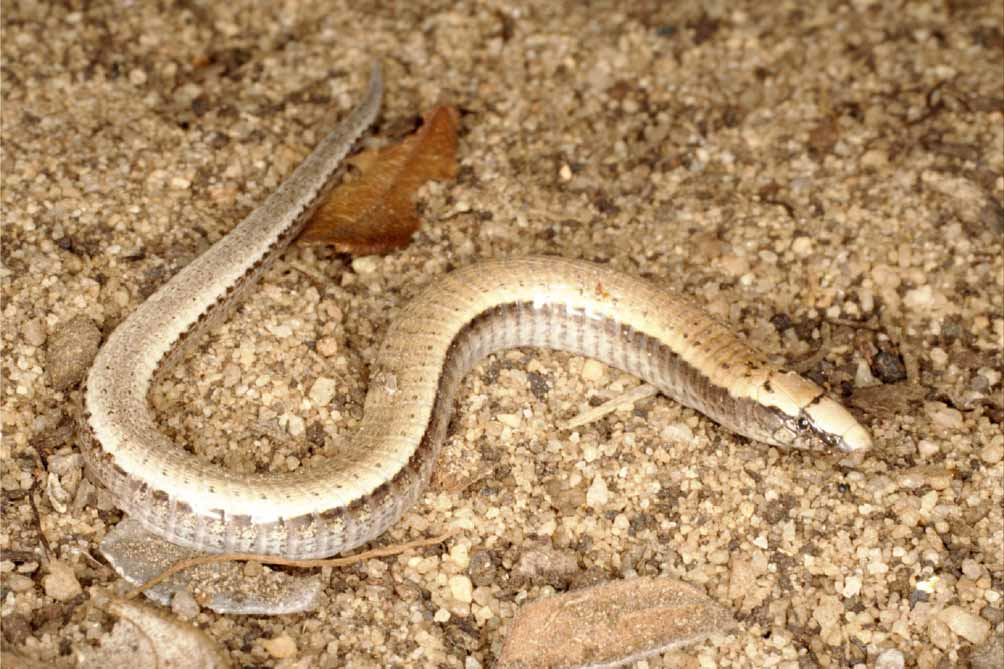 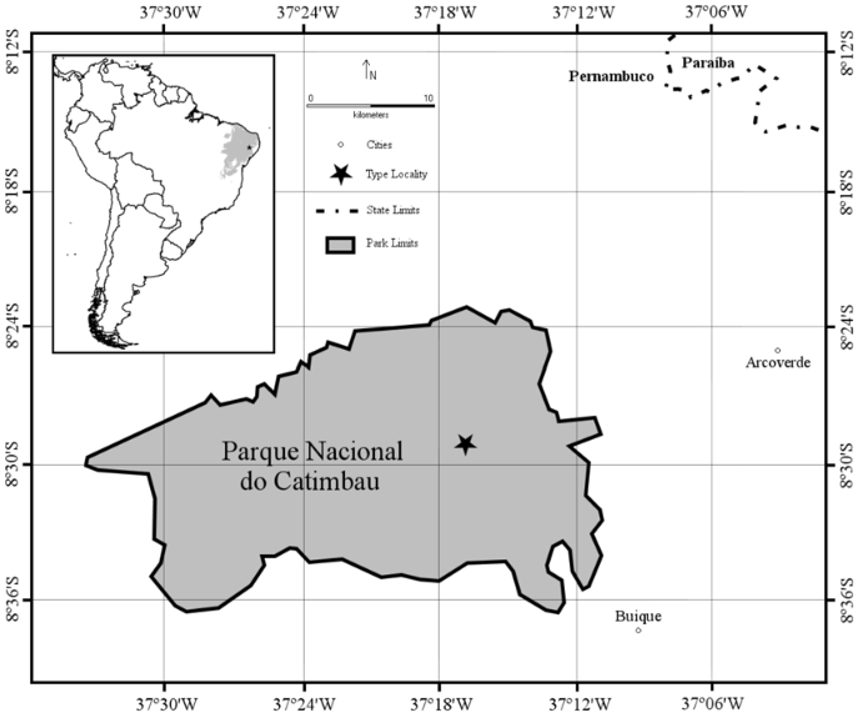 FIGURE 4. Type locality of Scriptosaura catimbau in the context of the Caatingas of northeastern Brazil (gray) and that of Parque Nacional do Catimbau. 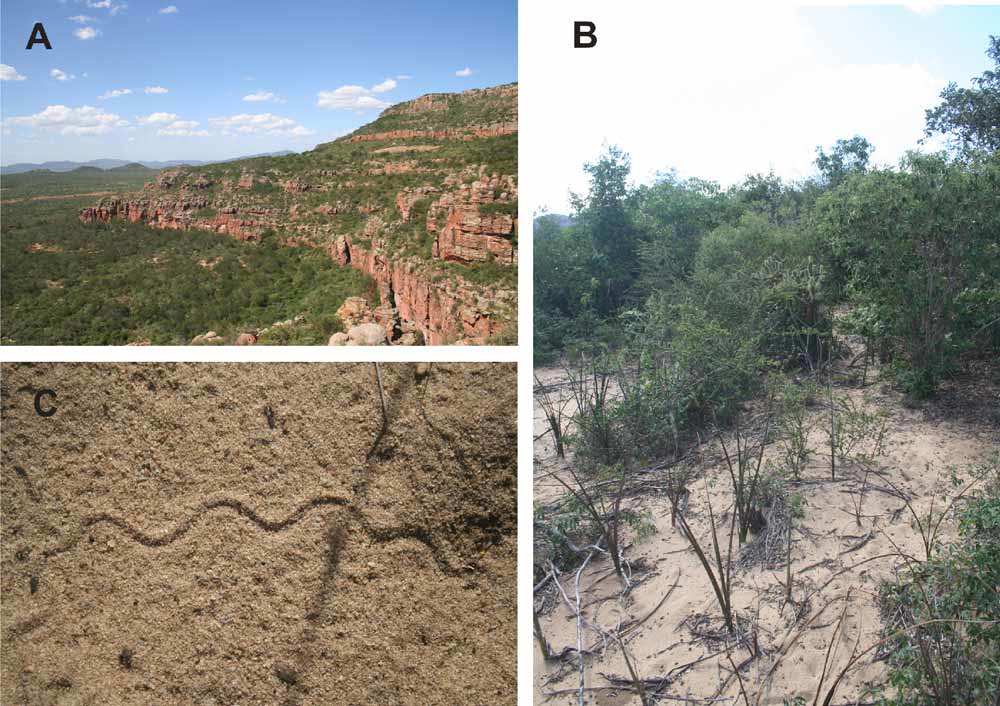