Diagnosis:—The new species differs from G. kraussii ( Hilliard 1977)   in its upper leaf surface being pilose rather than velvety pubescent, in its leaf base never contracting into a winged petiole, and in its pappus that is whitish rather than violet-purple. It differs from G. ambigua ( Hilliard 1977)   in presenting strongly raised veins below, in lacking underground stolons, and in holding the blades of its much larger leaves more or less horizontal rather than angled.

Biology:— Gerbera sylvicola   flowers throughout the year, mainly between September and January.

Diagnostic characters and relationships:— Gerbera sylvicola   shows a unique combination of characters within the genus ( Table 1). It is one of only two South African species adapted to low light conditions on forest floors, the other being G. cordata ( Thunberg 1800: 154) Lessing (1830: 297)   which is not only geographically well separated, occurring in the forests of the Eastern and Western Cape Provinces, but is placed in the separate section G. sect. Piloselloides Lessing (1830: 296)   based on the scape form and   cypsela characters. Although at first sight G. sylvicola   appears closely related to G. cordata   , it differs in possessing cypselae with shorter beaks ( Table 1), annuli lacking clubshaped hairs, and the cypsela lacking inflated, apiculate hairs ( Hansen 1990). The scapes do not widen below the head, and its leaves are pilose above and not scabrid, without rufous hairs below. Gerbera sylvicola   differs from G. kraussii   in its leaf base never contracting into a winged petiole, in its pappus that is whitish rather than violet-purple, and in its upper leaf surface being pilose rather than velvety pubescent. It differs from both G. ambigua   and G. kraussii   in its forested niche preferences: G. ambigua   tolerates at most open woodland situations and G. kraussii   only open grassland. Presentation by the new species of strongly raised veins below distinguishes it from Gerbera ambigua ( Hilliard 1977)   . It further differs in holding the blades of its much larger leaves more or less horizontal rather than angled ( Fig. 2 View FIGURE 2 ), and in lacking underground stolons. Significantly, none of the synonyms included in G. kraussii   or G. ambigua   by Hilliard (1977) or Hansen (1985a) shows the combination of characters present in G. sylvicola   . Particular mention is here made of G. ambigua var. cardiobasis Thellung (1923: 452)   , synonymised by Hansen (1985a) with G. ambigua   , an altogether smaller plant of damp coastal grasslands in Pondoland. Its leaves are more leathery, with cordate bases that are never imbricate. Further, the cypselae of G. ambigua var. cardiobasis   bear a purple-violet rather than whitish pappus. These and further distinctions may be found in Table 1.

Etymology:— Sylvicola = inhabitant of the woods. 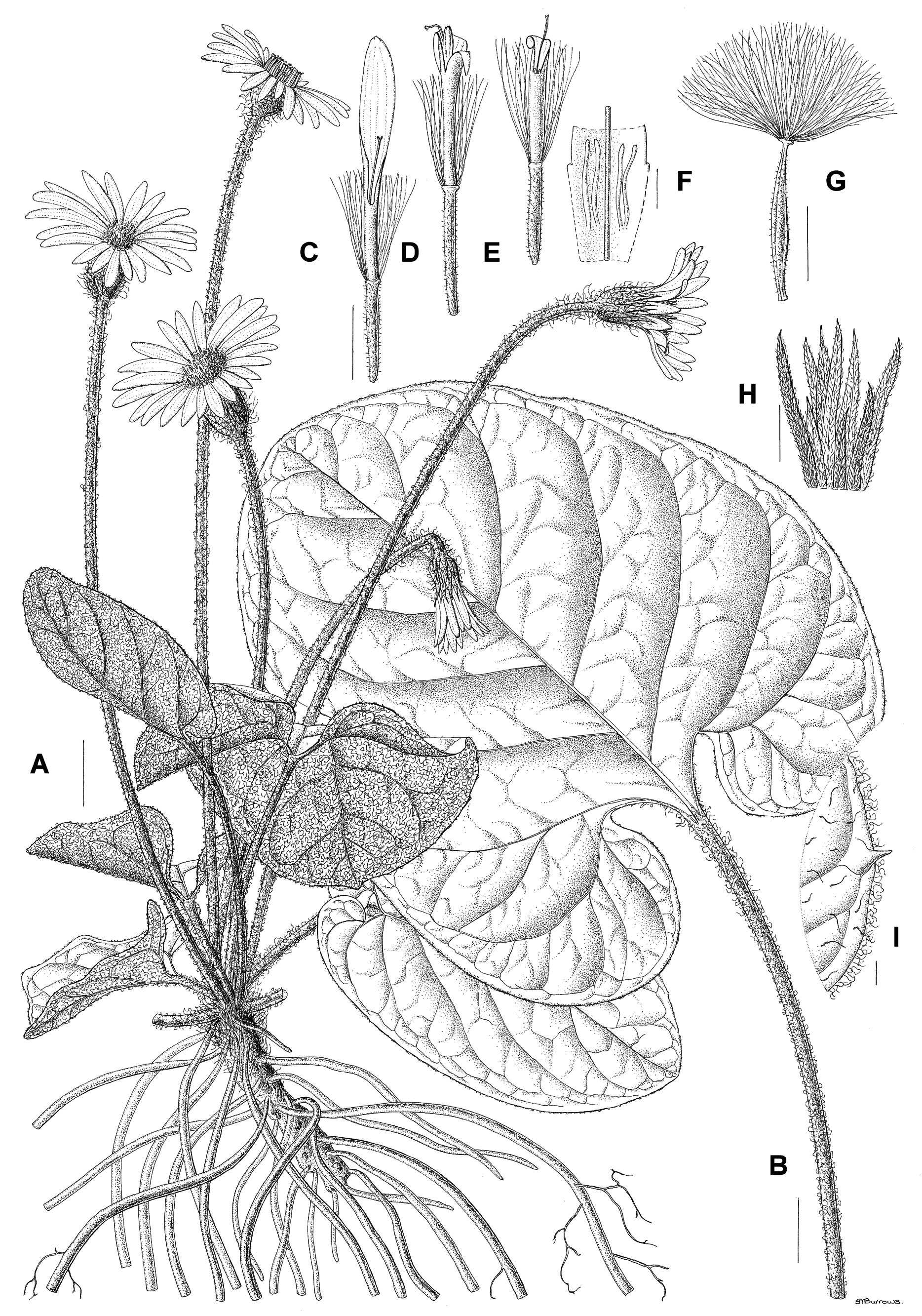