Etymology: The specific epithet is derived from the Latin word recavus (=arched inward, concave) in reference to the posterior edge of skull bones, which are arched inward.

Color: Dorsal color pattern variable, background color light brown to beige, with brown chevrons anteriorly oriented; a thin, concave, interorbital brown bar is present; a canthal dark brown line follows the canthal groove from nostril to orbit, extending to the side of the head and over the tympanum, contiguous with a lateral reddish brown stripe which fades posteriorly and is replaced by darker vermiculations; a whitish line ventrally to this lateral dark stripe extends from the supralabial region to the groin; superior surfaces of hind and forelimbs with dark brown transverse bars, hidden surfaces of thighs with darker vermiculations; sub-cloacal region dark brown with whitish spots, posterior surfaces of tarsus dark brown. Throat dark; belly with faded vermiculations. In preservative, same pattern but faded.

Variation: We found great variation on the ventral pattern of the adults, ranging from homogeneously cream to fully variegated cream and dark brown. All newborns nonetheless showed a variegated belly. The number of dark chevrons was also variable, often green in females. The size of the lateral dark stripe and whitish line was also variable, usually extending from the post-tympanic region almost all the way to the groin, occasionally fading by the middle of the flank. A few males and most females had a greenish upper loreal region. In females, transverse bars on limbs had green details. Despite the great variation on coloration they were very similar morphometricaly, with the exception of one individual that has a small tympanum (about 64% of eye diameter), while most of the individuals lies within the rage 69–95% of eye diameter. Measurements are presented in Table 2.

Advertisement call: Seventeen calls from seven males were analyzed. Calls are given sporadically in a rate of 9 call/min. Each call consists of a single pulsed note, averaging 106 ms in length (102–115 ms); slightly different from reported by Moura et al. (2012), maybe due distinct environmental factors affecting the vocalization, such as temperature and humidity ( Duellman & Trueb 1994). Dominant frequency is about 1391 Hz (1102–1630 Hz). Each note has 3.17 pulses (2–4). Each pulse is slightly frequency-modulated and no harmonic structure is visible ( Fig. 11 View FIGURE 11 ).

Comparison with other species (data from congeners are presented in parenthesis): G. recava   sp. nov. can be distinguished from all other Gastrotheca species   from the Atlantic Forest, except G. fissipes   , G. megacephala   and G. prasina   sp. nov., by a large vertically elliptical tympanum with diameter about 69–95% of eye diameter (tympanum small to medium sized, circular, 50–65% of eye diameter; combination of G. ernestoi   , G. albolineata   , G. fulvorufa   and G. microdiscus   ), toes vestigially webbed (toes distinctively webbed), dorsal skin shagreened (smooth in all others and weakly granulate in G. flamma   ). G. recava   sp. nov. can also be distinguished from G. pulchra   and G. flamma   by the absence of a tubercle on the upper eyelid and no appendage on calcars (present). From G. albolineata   , G. microdiscus   , and G. pulchra   , it can be distinguished by its skull skin extensively coossified (not co-ossified). It can be distinguished from G. megacephala   , G. fissipes   and G. prasina   sp. nov. by the absence of an infraorbital brown bar, by an infraorbital brown coloration extending posteriorly along the temporal region and over the tympanum, reaching a lateral brown stripe (infraorbital brown bar present), by having skull bones with an extensively arched inwards posterior edge (posterior edge of skull bones roughly straight, in G. megacephala   and G. prasina   sp. nov. [ Figs. 5A, B View FIGURE 5 ], and arched outwards [ Fig. 5D View FIGURE 5 ], in G. fissipes   ). The extensively arched inwards posterior edge of G. recava   sp. nov. skull bones produces a narrow contact between frontoparietal and squamosal bones ( Fig. 5C View FIGURE 5 ), while in G. fissipes   there is a broad contact between frontoparietal and squamosal bones ( Fig. 5D View FIGURE 5 ).

Natural history and distribution: Individuals commonly called at night after sunny days, and also (although less often) at daytime on cloudy days. On a sunny day, males started to call around 19h and continued throughout the night. The species appears to be a habitat generalist, as it was commonly found in secondary growth forests in early stages of regeneration, as well as in denser or more pristine forests. Irrespective of habitat used, individuals were found from 10 cm above the ground to more than 5 m high, perching on branches of small shrubs and trees. Only one ovigerous female was found, two others showed signs of recent use of the pouch, and small juveniles of a few days of age were commonly found on the vegetation ( Fig. 12 View FIGURE 12 ). The ovigerous female was kept in captivity in a small terrarium with water and food supply ad libidum. After one month in captivity, she gave birth to 20 fully developed juveniles weighting 0.8g on average. Hundreds of males were heard calling from the vegetation, being the most common forest tree frog at the site. Two other Gastrotheca species   were also recorded at EEEWG, G. pulchra   and G. megacephala   , both sharing the forest with G. recava   sp. nov. However, only one individual of G. pulchra   was collected and a few individuals of G. megacephala   were heard calling from the trees along the forest, but none was observed. An analysis of stomach content of G. recava   sp. nov. showed a generalist diet consisting of arachnids (Araneae), insects (Blattaria, Hemiptera and Orthoptera) and mollusks ( Gastropoda  ). Plant materials (seeds) were also found. Orthopterans were the most common prey category, found in five of the ten stomachs analyzed. Two stomachs were empty.

Gastrotheca recava   sp. nov. is currently known from the Atlantic Forest of southeastern Bahia, south from the “Recôncavo Baiano” ( Fig. 7)

Remarks: Recently, the advertisement call of a Gastrotheca   identified as G. fissipes   was described from southern Bahia ( Mendes et al. 2012). Mendes et al. (2012) comment that individuals from the population addressed in their work show some differences and recognize that “ they do not have a light blotch under the eye as described for individuals from the type locality in Pernambuco ” ( Mendes et al. 2012: 62). Given the absence of this white blotch and dark bar under the eye (present in G. fissipes   , absent in G. recava   sp. nov.), the locality ( G. recava   sp. nov. is currently known from southern Bahia and G. fissipes   restricted to Pernambuco and Alagoas), the picture and the advertisement call described by Mendes et al. (2012), we recognized the population addressed in their work as belonging to G. recava   sp. nov. Although Mendes et al. (2012) provided an accurate description of the advertisement call; we here re-describe it based on individuals that we collected at the type locality (see Advertisement call section). 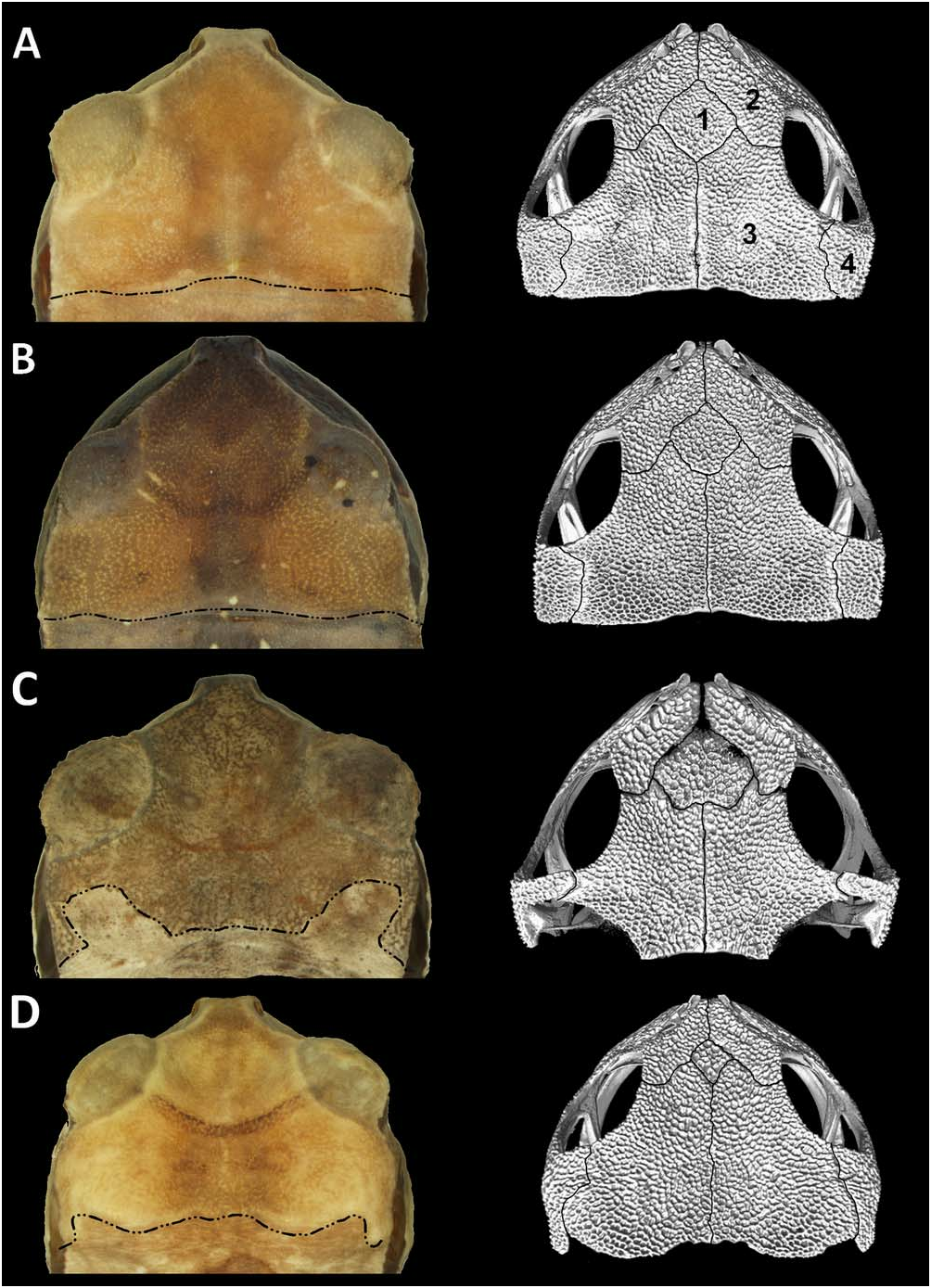 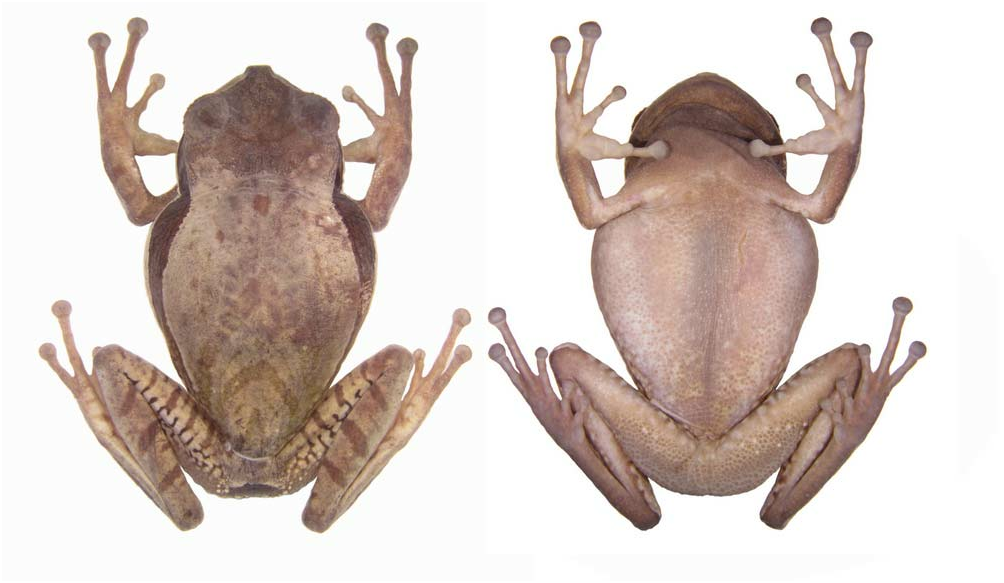 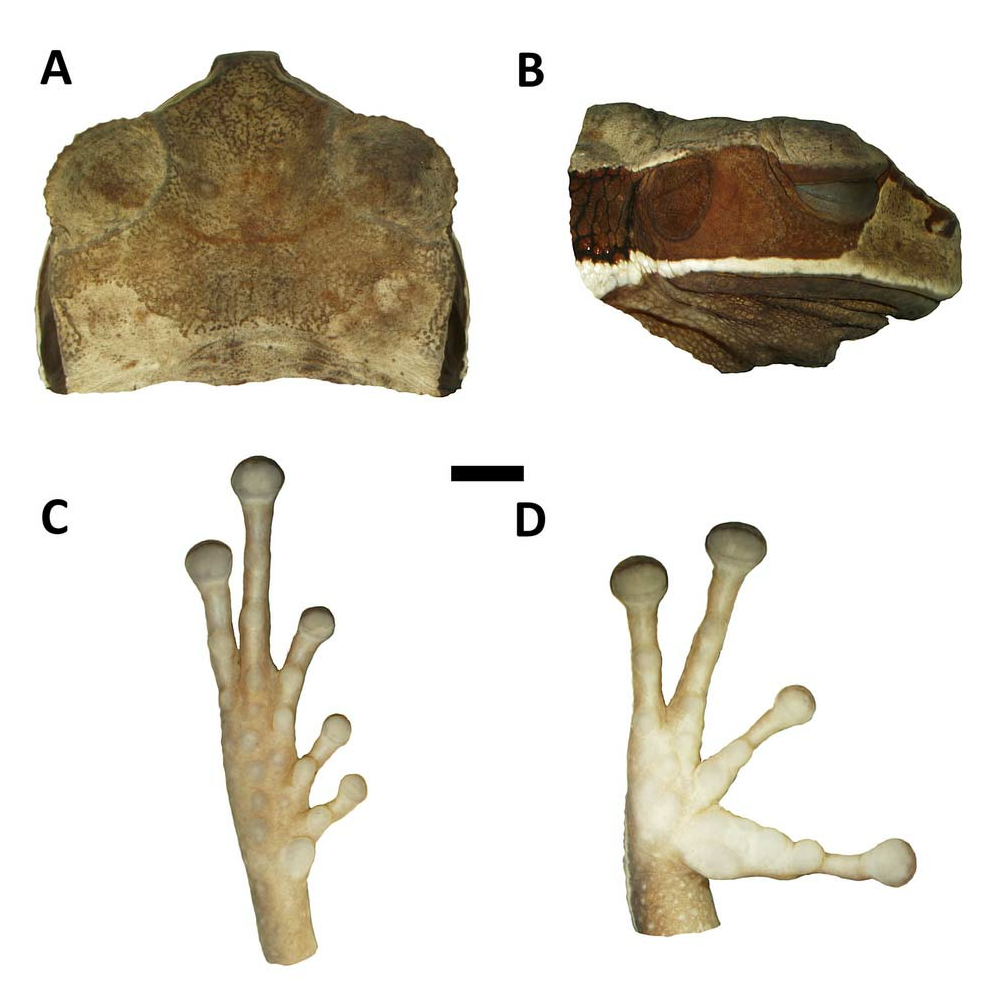 FIGURE 10. Living specimen of Gastrotheca recava sp. nov. (A), perching over a fern, where they were commonly find (B), a juvenile (C), an ovigerous female (D) and a male calling with extended vocal sac (E). 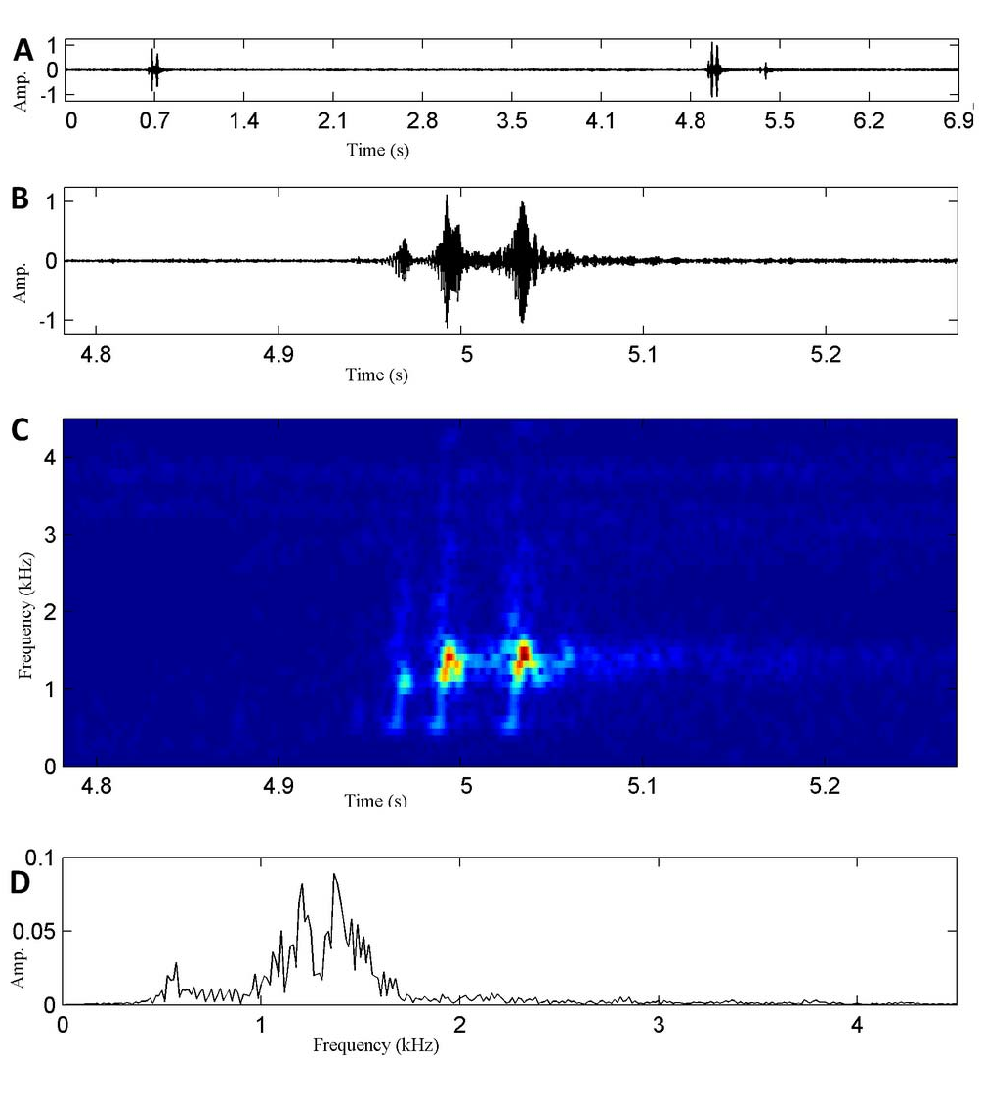 FIGURE 11. Advertisement call of Gastrotheca recava sp. nov.: (A) Oscillogram containing two calls and; (B) An oscillogram of a section comprising a single call; (C) Spectrogram of the same call; (D) Amplitude spectrum of the same call. Calls were recorded about 20:00h on 8th December 2011, air temperature was about 22ºC. FIGURE 12. Habitats occupied by Gastrotheca recava sp. nov. at EEEWG. (A) view of the interior of the forest; (B) external view of a hill covered with forest; and (C) an anthropized area in regeneration.