Etymology: The specific epithet is a Latin word derived from prasinus (=green), which refers to the greenish general body color of this new species.

Variation: Small color variation was observed among individuals, mostly affecting the visibility of the dorsal chevrons. Some specimens possessed homogeneous green dorsal surfaces, others had a distinctive chevron-shaped spot, while a few showed an intermediate color pattern. Variation in measurements is presented in Table 2.

Comparison with other species (data from congeners are presented in parenthesis): G. prasina   sp. nov. can be distinguished from all other Gastrotheca   from the Atlantic Forest with the exception of G. fissipes   , G. megacephala   and G. recava   sp. nov. by its large size, 97mm in females, 79.3–89.6mm in males (combined SVL of the other species 32.6–77.2mm in females, 27.7–70.0mm in males), tympanum large, vertically elliptical, with diameter about 80–95% of eye diameter (tympanum small to medium sized, circular, 50–71% of eye diameter), toes vestigially webbed (toes distinctively webbed), dorsal skin shagreened (smooth, weakly granulate in G. flamma   ). G. prasina   sp. nov. can be further distinguished from G. pulchra   and G. flamma   by the absence of a tubercle on the upper eyelid and by lacking an appendage on calcars (present). From G. albolineata   , G. microdiscus   , and G. pulchra   , it can be distinguished by its skull skin extensively co-ossified (not co-ossified). It can be distinguished from G. megacephala   by its narrower head 37–39% of SVL (40–43% of SVL), larger body size 79.3–89.6mm in males (71.9–78.7mm in males), tympanum diameter in males 5.54–6.83mm (6.9–8.1mm in males), and several advertisement call features, including the duration of first note 432–543ms (350ms), the duration of the second note 149–187ms (60ms), the number of pulses in the first note 14–17 (9) and in the second note 6–8 (5), the occurrence of notes and pulses slightly frequency-modulated (notes end pulses not frequency modulated), and the fact that the first note is the most intense one (second note is the most intense). From G. fissipes   , G. recava   sp nov., and G. megacephala   , it can be distinguished by its greenish background dorsal coloration (brownish background coloration). From G. recava   sp nov. and G. fissipes   , it can be distinguished by having the posterior edged of parietal bones roughly straight ( Fig. 5A View FIGURE 5 ) (posterior edge of skull bones extensively arched inwards, and arched outwards, respectively; Figs. 5C, D View FIGURE 5 ). Additionally from G. recava   sp. nov. it can be distinguished by the presence of a dark brown infraorbital bar (absent, replaced by a dark brown temporal coloration contiguous with a dark brown stripe that extends through the lateral surfaces of the body) and an advertisement call consisting of pulsed notes with 6 to 17 pulses (24 pulses).

Natural history and distribution: Males were commonly found calling from the vegetation at nighttime after rainy days. Calls were heard soon after the sunset. Males were heard and seen while calling from inside ground bromeliads between 18h–19h; it is possible that they hide in the axils of these plants during the day. From 20h–21h, they were heard and seen at lower branches of small trees emerging from large clusters of bromeliads. At ca. 22h, males were calling from higher branches (2–3 m high) in small trees, close to bromeliad clusters. One female was found inside a bromeliad tank, carrying more than 16 eggs. Although ground bromeliads were also present inside the forest, every individual was either found or heard in isolated patches of open vegetation with bare ground and sandy soil ( Fig. 6 View FIGURE 6 ). The species was mainly found in this kind of habitat, a transitional formation between forest and high-altitude grassland that resembles the coastal restingas, but that is found in the region only above 900 m a.s.l. of elevation.

The currently known geographical range of this species is thus restricted to these patches, and the bromeliads occupied by individuals were also used by other frog species such as Phyllodytes luteolus   and Bokermanohyla sp. This is the second record of Gastrotheca   in the state of Minas Gerais ( Moura et al. 2012) and the inland-most report at this latitude; most Atlantic Forest Gastrotheca species   have coastal distributions ( Fig. 7). 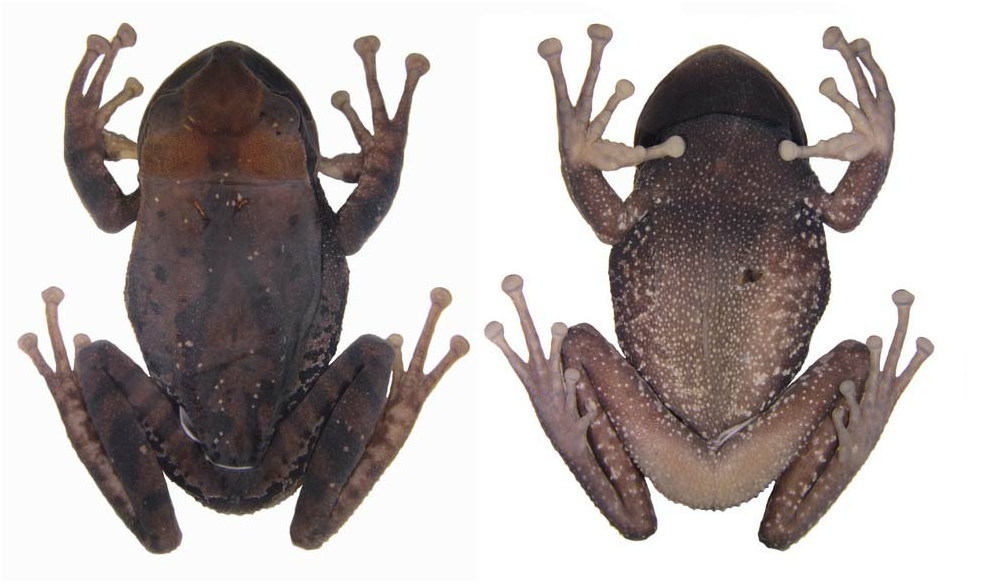 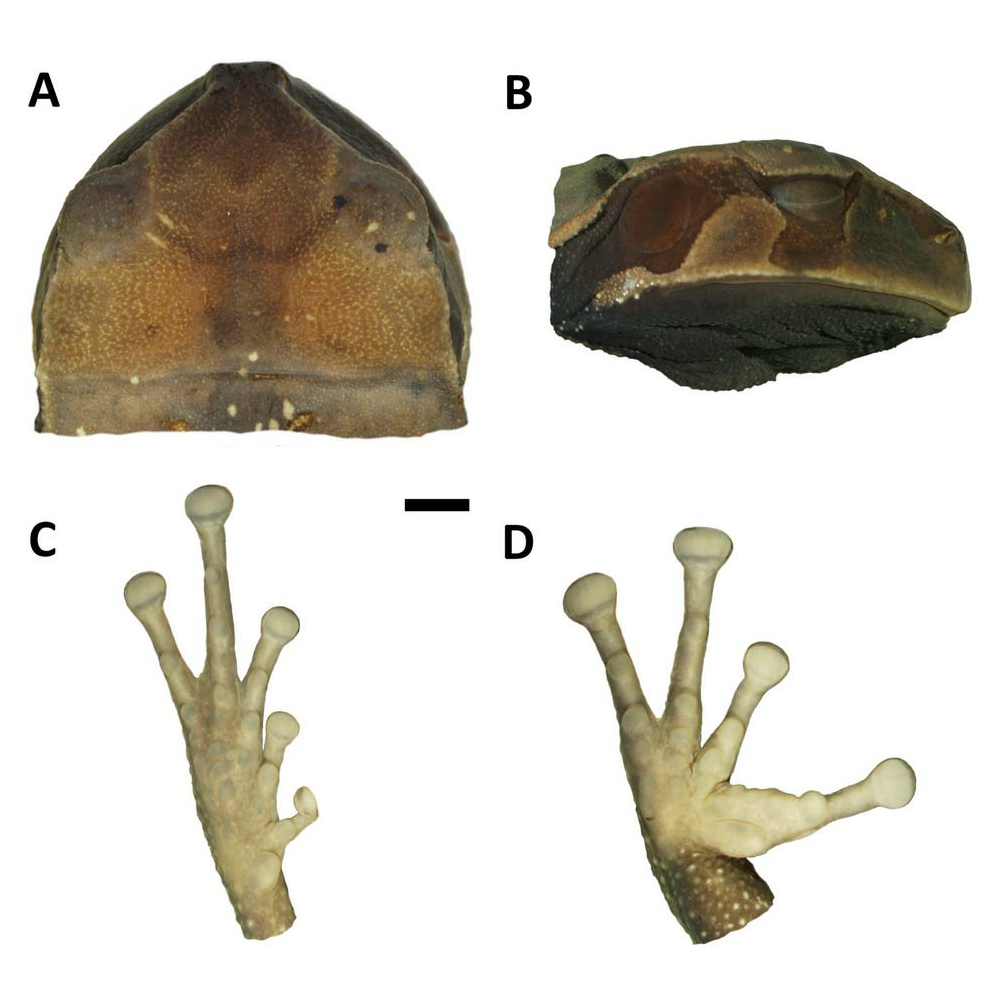 FIGURE 3. Living holotype (MZUSP 147059) of Gastrotheca prasina sp. nov. (A), living paratopotypes hiding inside a bromeliad (B), calling with extended vocal sac (C), and a female carrying eggs on its pouch (D).

FIGURE 3. Living holotype (MZUSP 147059) of Gastrotheca prasina sp. nov. (A), living paratopotypes hiding inside a bromeliad (B), calling with extended vocal sac (C), and a female carrying eggs on its pouch (D). 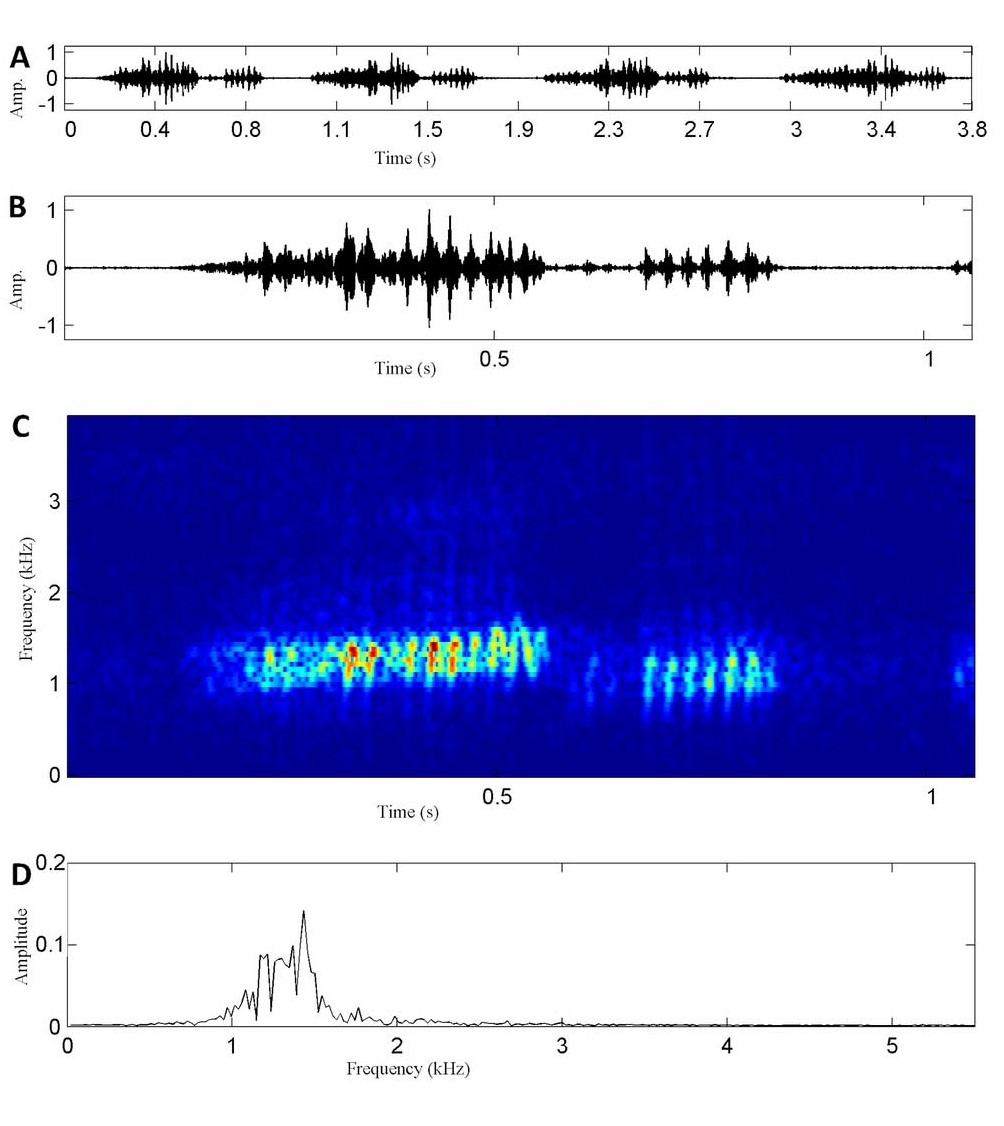 FIGURE 4. Advertisement call of Gastrotheca prasina sp. nov.: (A) Oscillogram containing four calls and; (B) An oscillogram of a section comprising a single call; (C) Spectrogram of the same call; (D) Amplitude spectrum of the same call. Calls were recorded about 20:00 h on 6th December 2009, air temperature was about 21ºC. FIGURE 6. Habitats occupied by Gastrotheca prasina sp. nov.: (A) A general view of the landscape at RBME; note hills slopes covered with forests and patches of open sparse vegetation on their top; (B) a detail of the open vegetation that dominate the summit, showing the sandy soil with bare ground, and dense clusters of bromeliads; (C) and the bromeliad in which individuals of Gastrotheca prasina sp. nov. were found.