This species can be distinguished from others in East Asia by the size (usually 1.70-2.0 mm), by the weakly aciculate frons without apparent sexual dimorphism, by the antennae with nearly straight sutures, by the pronotal disc occupying one third of the pronotal length, with entirely hair like setae, and by the interstrial ground vestiture of the female at the apex of the declivity, which is dense and elongate forming a brush.

Female. Length 1.70-2.05 mm. Proportions 2.23 × as long as wide. Frons simple, convex, in the lower portion with aciculations converging at epistoma, and with indistinct longitudinal median keel, in the upper portion with sparsely set punctures, faintly shining, covered by golden hairs, longer above epistoma. Antennal club with three nearly straight sutures marked by setae (fourth suture only indistinctly feebly marked) at outer surface and three strongly procurved sutures at inner surface. Antennal funiculus with four funicular segments, the pedicel is shorter than the other segments combined. Pronotal colour brown, similar to head and elytra (may be most beetles are incompletely coloured since the original description ( Berger 1917) gives mature beetles colour as black). Pronotal profile 0.82 as long as wide, slightly triangular, widest in posterior third, distinctly narrowing towards the base, rather strongly narrowing anteriorly, posterior angles strongly rounded. Pronotal margin rounded, armed with six serrations at the anterior margin, central denticles larger than lateral. Pronotal declivity with approximately 50 asperities. Pronotal disc approximately one third of the pronotal length, sloping rather strongly from the summit. Pronotal vestiture long, golden and hair-like on disc, with dense, long hairs on the postero-lateral margin. Suture between pronotum and elytra weakly sinuate, base of the pronotum is marked with fine carina. Scutellum V-shaped. Elytra 1.47 × as long as wide, 1.9 × as long as pronotum, 1.05 × wider than pronotum, parallel-sided for more than 3/4 of length, then broadly rounded toward apex. Striae impressed, interstriae convex, minutely punctured; punctures in striae round, with flat bottom, densely set, but not fusing with neighbouring punctures. Interstrial bristles erect, hair-like with pointed apices. Interstrial ground vestiture scale-like, formed by elongated pointed scales 2.0 × as long as wide arranged in four rows at each interstria. Apex of elytra obtuse, slightly projecting, with dense brush of short hair-like brown setae. Protibiae and protarsi with only straight, hair-like setae. Mesocoxae moderately separated, a little more than distance between metacoxae. Proventriculus (according to Berger 1917, sex of specimen dissected not indicated) typical of the genus. Proventriculus sutural teeth in a narrow band, rather numerous, blunt and rounded tubercles arranged in two irregular rows along each side of the suture. Apical teeth arranged in four rows, central teeth long, faintly curved, lateral teeth much smaller in size and disappear beyond the centre of each half of apical plate, not extending up to its lateral margins. Closing teeth usually in number of ten deeply palmate, longer than masticatory brushes. Masticatory brush as long as apical plate.

Male. Similar to female except: Length 1.70-1.95 mm (lectotype 1.75 mm). Elytra slightly stouter than in the female, about 1.39-1.43 as long as wide. Apex of elytra with hair-like setae similar to rest of declivity. Aedeagus (according to Berger 1917) long, penis body with developed end plates. Penis apodemes 1.5 × as long as penis body. Tegmen with short paired tegminal apodemes.

Cryphalus scopiger  is a very common species that builds galleries in thin bark of stems and drying limbs of Manchurian walnut in river valleys. Wu et al. 1991 reported Cryphalus viburni  as a pest of Juglans mandshurica  in northern China, with detailed descriptions of the phenology and excavation of non-reproductive galleries. We found specimens deposited in IOZ with the corresponding collection information (i.e., implicit vouchers) labelled as C. viburni  , which were determined to be C. scopiger  . This is corroborated with the host plant information. The descriptions provided were very similar in wording and content to those by Yin et al. (1984), and did not match the specimens vouchered, presumably not based on directly examined material. Song et al. (1998) also reports the same species on Prunus  , though specimens were not verified. 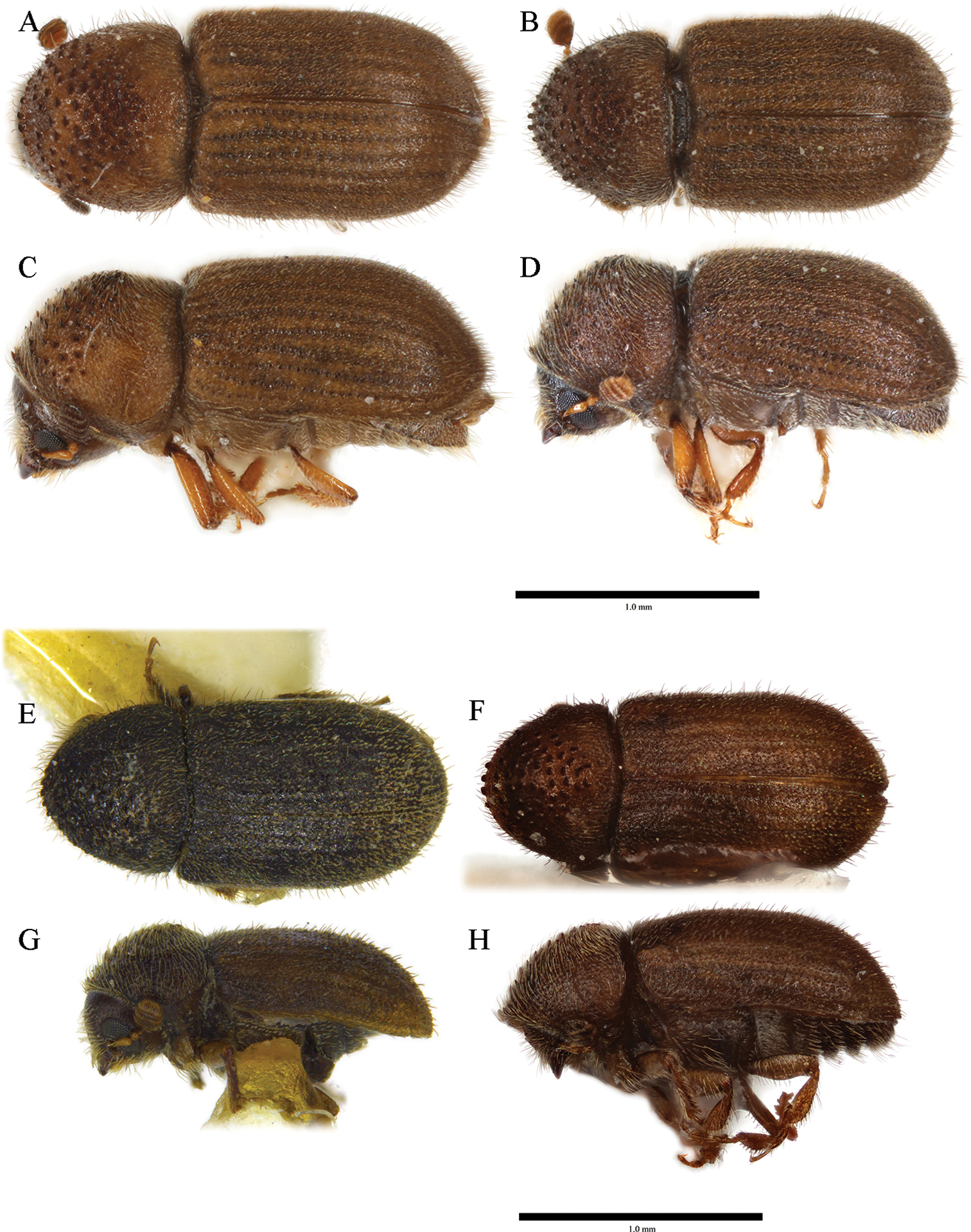