In full-face view anteriormost points of frontal lobes are slightly posterior to the level of the midpoint of the shallowly convex anterior clypeal margin. With head tilted slightly back from full-face view the clypeal margin in front of each antennal socket is shallowly rounded to weakly angulate, but lacks blunt triangular prominences that project farther forward than the midpoint of the anterior clypeal margin. Frontal carinae relatively short; in full-face view terminating well in front of the level of the anterior margins of the eyes. Eyes located behind the cephalic midlength (EP 1.17–1.40). Leading edge of scape with conspicuous projecting setae. In full-face view entire side of head with setae that are curved anteriorly. In profile entire dorsum of head, and ventral surface, with curved standing setae. Cephalic dorsum between eyes with sparse foveolate punctures on a glossy surface. Anterior and dorsal surfaces of pronotum separated by an angle or weak margination, but without a strongly defined carina. Propodeal dorsum meets declivity through a blunt angle, without a transverse carina. Propodeal declivity usually with fine longitudinal striolae that radiate upwards from the foramen in which AII (petiole) is inserted; striolae easily visible in most specimens but sometimes faint, invisible in a very few. Promesonotal suture weakly impressed and distinguished by a series of minute ribs or aligned punctures; metanotal groove very faint to absent but median pit conspicuous. Mesosoma in dorsal view broadest across pronotum, narrower across mesonotum and propodeum (in holotype PW 1.35, width across mesonotum at its midlength 1.24, maximum width across propodeum 1.26). Dorsum of mesosoma with scattered punctures. Entire mesosoma dorsally with numerous standing setae. Dorsal (outer) surfaces of mesotibiae and metatibiae with standing setae present that are curved or inclined toward the apex. Dorsal surface of AII (petiole) meets anterior surface at an angle, without a transverse carina. Posteriorly the dorsum of AII lacks a carina but a weak transverse impression is usually present above the foramen. In dorsal view the posterior corners of AII are rounded to bluntly angular, but are not extended into projecting sharp angles or stout triangular teeth that project posterolaterally. Lateral surface of AII, below the dorsolateral margin and above the level of the spiracle, with a conspicuous longitudinal ridge or carina that extends the length of the sclerite. In dorsal view AII, AIII and AIV all distinctly broader than long. Abdominal tergites AII to AIV with numerous setae that are directed posteriorly and are mostly suberect to subdecumbent. Curved setae numerous and distinct on sternites of AIII and AIV. Abdominal tergites AII to AVI sculptured only with sparse punctures. Full adult colour black, appendages blackish brown to black; clypeus usually dull reddish; sides of pronotum and sides of abdominal tergites AIII and AIV sometimes with a dull reddish spot, but this is variably developed within the series and may be inconspicuous or absent on any sclerite.

This species is closely related to rex   , sharing its relatively short frontal carinae and unarmed posterior corners of AII. However, the two have a consistently different shape to the anterior clypeal margin in front of the antennal sockets, and the vast majority of silens   specimens have very fine striolate sculpture on the propodeal declivity. The male of this species is known, see under Malagasy males, below. 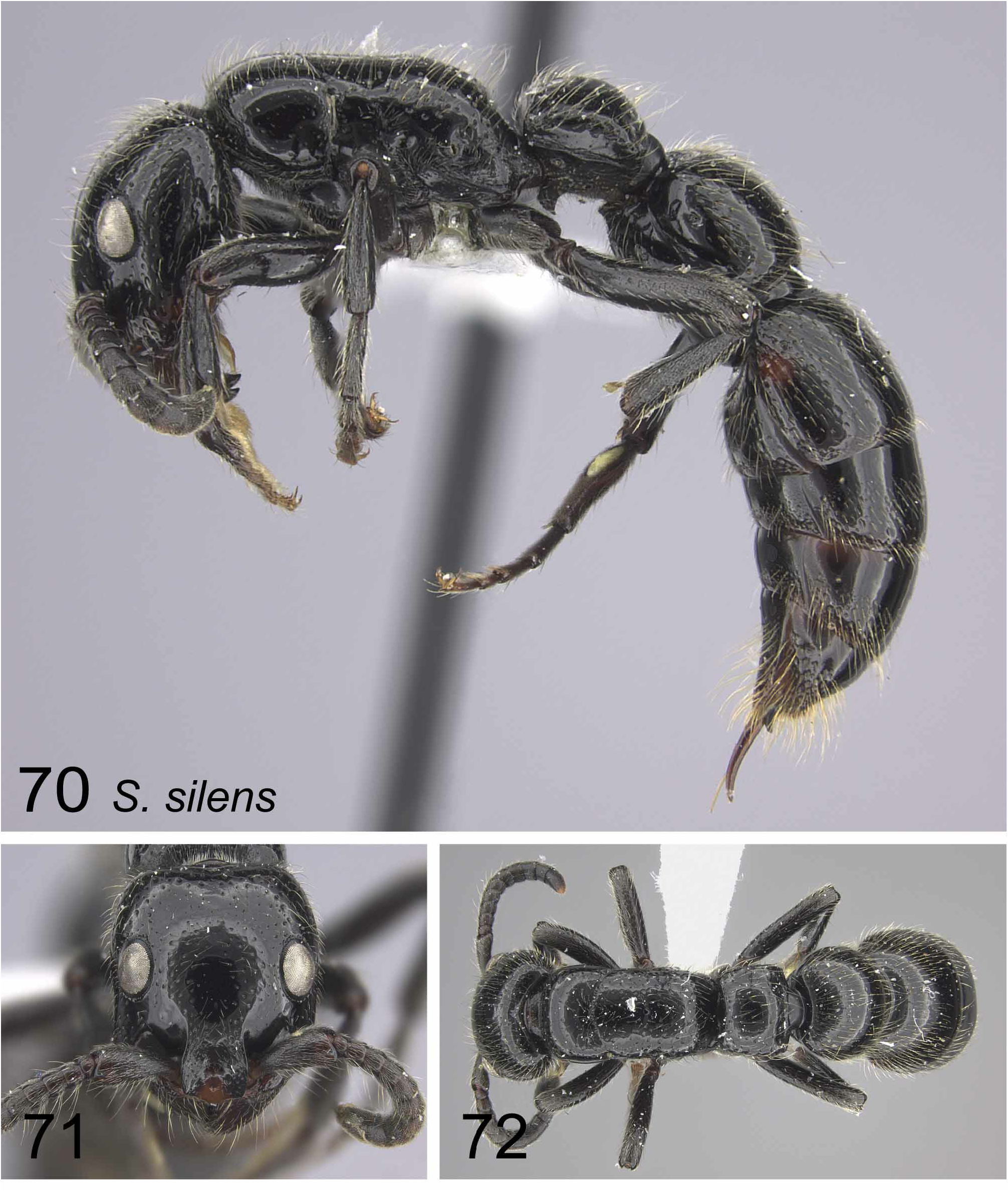