The new species differs from Dyckia brachyphylla in having larger asymmetric rosettes (vs. symmetric), strongly succulent leaf blades that are flat to slightly canaliculated and strongly ribbed (vs. slightly so), with patent to slightly retrorse spines (vs. antrorse), floral bracts long-acuminate (vs. acute), flowers slightly reflexed or rarely patent (vs. patent), anthers elliptic (vs. linear). It differs from D. saxatilis by having an asymmetric rosette (vs. symmetric), leaf blades strongly succulent (vs. succulent), strongly ribbed on the abaxial surface (vs. slightly ribbed), with shorter spines (0.7–1.4 mm vs. 1.5–2.3 mm), except for the entire apical third, upper peduncle bracts ovate (vs. elliptic to oblong), filaments free above the common tube with the petals (vs. connate), and having a shorter style (0.6–0.7 vs. 1–2 mm).

Distribution and habitat:––This new species has been observed only in the Espinhaço Mountain Range, in the municipality of Serro, Minas Gerais State, in southeastern Brazil. It was found as a terrestrial plant, growing on quartzitic rocky outcrops, in sandy soil.

Phenology:––The flowering period of Dyckia sulcata is between February and June.

Conservation status: — Dyckia sulcata is considered to be critically endangered (CR) because its area of occurrence is estimated to be less than 100 Km² and it has been reported from only a single location (along Federal Highway BR-259 that connects Serro to Diamantina in Minas Gerais State).

Etymology: —The specific epithet refers to the deep grooves present on the abaxial leaf surface, which differentiate this species from its closest relatives ( Fig. 3A View FIGURE 3 ).

The main features of D. sulcata are the asymmetrical rosette with leaves arising more on one side, the leaf blades strongly succulent, flat to slightly canaliculate, and strongly ribbed abaxially.

Leaf anatomy:— The leaf anatomy of D. sulcata follows patterns common to the genus ( Tomlinson 1969; Santos- Silva et al. 2013). Other features observed (such as a thick cuticular layer, well-developed aquiferous parenchyma, and high densities of trichomes) can be viewed as adaptations to a xeric life style, as observed in other Dyckia species ( Lobo 2007; Santos-Silva et al. 2013).

Filaments above the common tube with the Petals free free connate

Cross-sections of the leaf blades of D. sulcata show an approximately flat adaxial surface and a homogeneous epidermis above the upper third. The abaxial surface in contrast, is distinctly ribbed, with protruding costal zones. There are only ordinary epidermal cells in the costal zones, while stomata and trichomes are observed in the intercostal zones ( Fig. 3A View FIGURE 3 ).

D. sulcata has a uniseriate epidermis on both surfaces. The epidermal cells tend to be rounded, with reduced lumens, and their walls are anticlinal and inner periclinal thickened but not lignified, while the outer periclinal is thin and covered with a thick cuticular membrane ( Fig. 3B View FIGURE 3 ). Silica bodies can often be seen in the epidermal cells of the leaf blades.

The peltate trichomes are attached to the epidermis by a pedicle composed of two cells. These trichomes cover both surfaces, although only on the proximal half of the adaxial surface. The peripheral shield of the scale is short (not exceeding the costal zone) and cup-shaped ( Fig. 3C View FIGURE 3 ). Due to the high density of scales in the abaxial zone, they cover the stomata.

The leaves are hypostomatic, with the stomata raised above the epidermal surface ( Fig. 3D View FIGURE 3 ). The guard cells have thickened walls, forming crests.

Under the epidermis, on both sides of the leaf blade, there is a sclerophyllous hypoderm composed of fibers. The cells of this hypoderm have strongly thickened walls with evident pits. The fibers make up about three to four continuous layers on the adaxial surface, while fibers are restricted to costal zones on the abaxial surface, in five to six layers. These fibers are characterized by elongated cells, with tapering edges and transverse septa.

The next layer on both sides of the leaf is composed of aquiferous parenchyma (hydrenchyma). This parenchyma is continuous on the adaxial surface, with small, rounded peripheral cells. The cells gradually become more elongated in an anticlinal direction, becoming chlorophyll-free, with thin and siphoned walls and wide lumens. The parenchyma is interrupted in the intercostal zone on the abaxial surface by the aerenchyma. These cells are rounded to slightly anticlinally elongated, with or without chlorophyll.

The transition between the aquiferous parenchyma and the chlorophyllous parenchyma (chlorenchyma) is continuous and gradual. The chlorenchyma is more concentrated near the vascular bundles (in some points adaxially entered in the direction of the hydrenchyma) and is characterized by juxtaposed cells, approximately isodiametric, and densely chlorophyllous.

Interspersed with the vascular bundles towards the intercostal areas, there are longitudinal columns of cellfree spaces in the aerenchyma, which is composed of braciform cells with short arms, but with low intercellular lacunosity.

The vascular tissues are arranged in lateral bundles, in a single series. Larger diameter bundles alternate with smaller diameter bundles ( Fig. 3E View FIGURE 3 ). Fibers surround these bundles and can be observed between the xylem and phloem. The larger bundles have fiber caps only at their ends. The smaller vascular bundles often have short extensions of fibers near the abaxial surface.

Idioblasts containing raphides were observed in the bottom third of both faces of the leaf blade, and only on the adaxial surface beyond this point.

Considering the features of the leaf anatomy of Dyckia reported in the literature, especially by Santos-Silva et al. (2013), it is clear that the leaves of D. sulcata have characteristics common to other species of Dyckia . However, detailed descriptions of specific structural elements (such as presence of peltate scales in the initial third of the adaxial epidermis, three to four layers or five to six layers of cells in the adaxial and abaxial sclerenchymatous hypodermal layers respectively, sclerenchymatous hypodermal cells with very thick cell walls, and sheath sclerenchyma fibers in the larger vascular bundles forming caps) contribute decisively to the identification of this species ( Tab. 2). 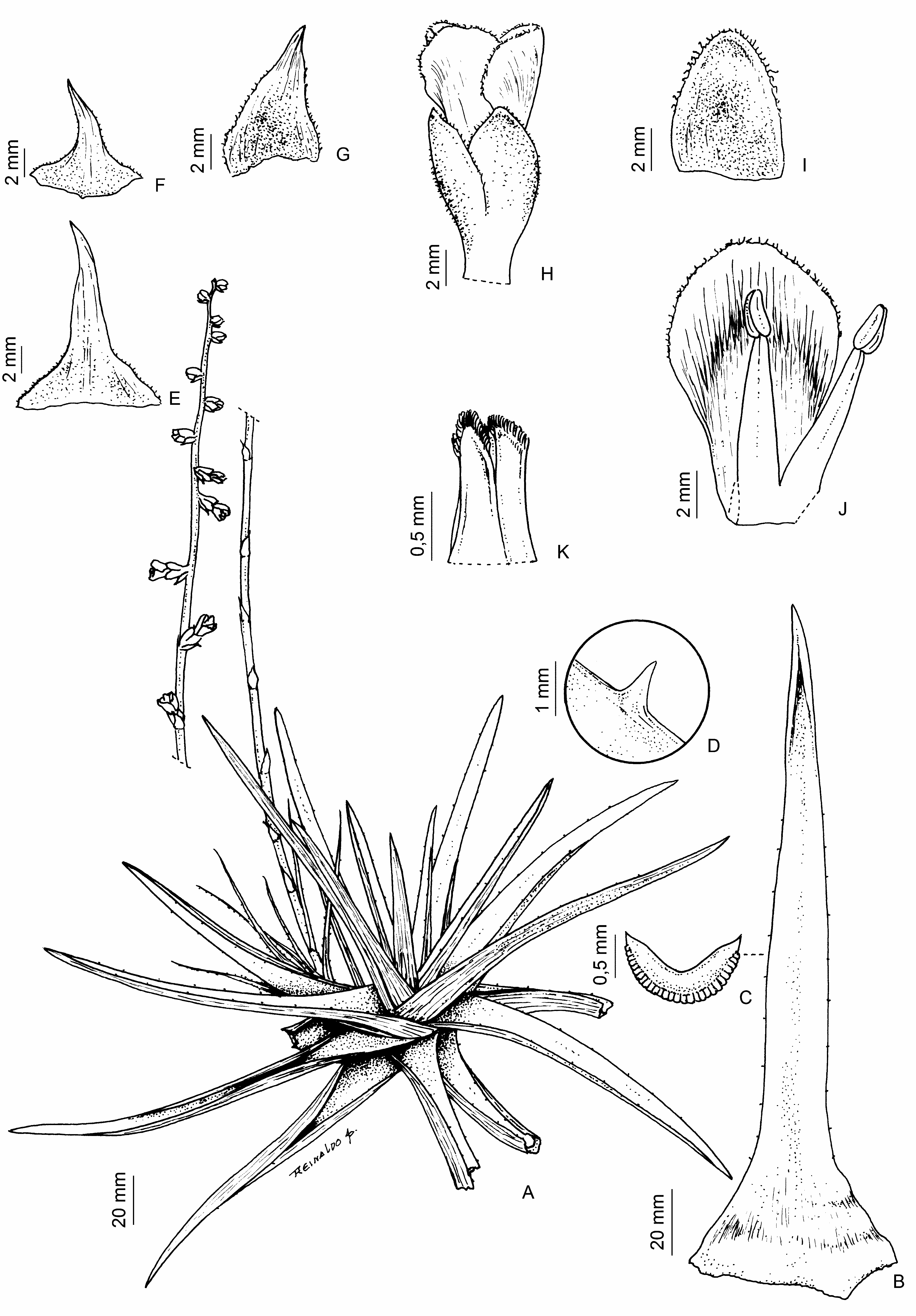 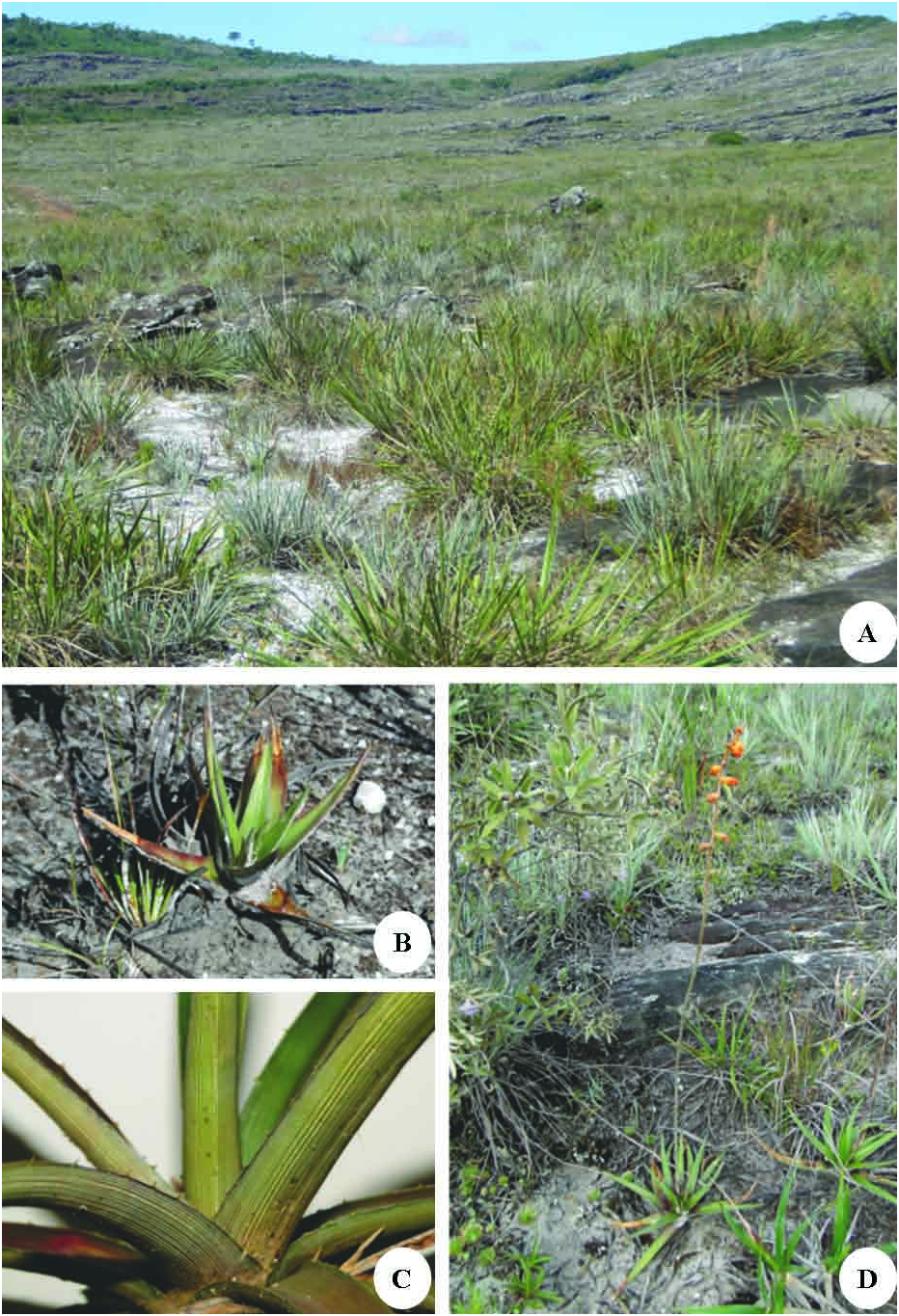 FIGURE 2. Dyckia sulcata. A. General view of the species habitat. B. Asymmetrical rosette. C. Detail of the strongly pronounced nerves on the abaxial side of the leaf blades. D. Habit. (Photos: E.A.E. Guarçoni). 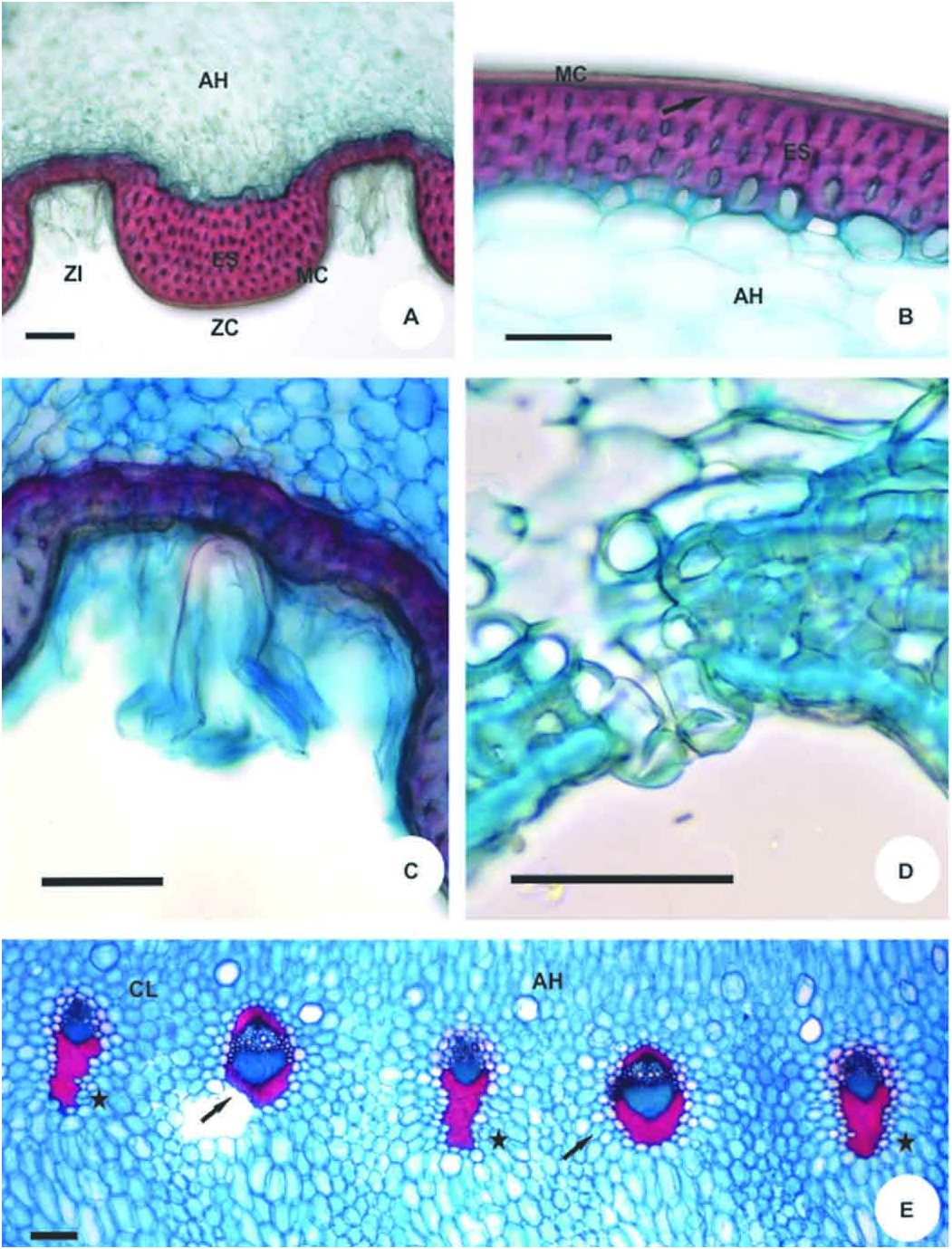