Some observations on the small predatory katydid Phlugis ocraceovittata Piza 1960  from southern Brazil are presented. A male was calling both day and night, producing long uniformly structured sequences with maximum energy between 40 and 60 kHz. According to anecdotal and indirect evidence the species is not exclusively predacious and can live partly also on vegetable food.

The neotropical genus Phlugis  comprises almost forty species distributed from southern Mexico and the Caribbean to Brazil, Paraguay and northeastern Argentina. They are small and slender light green katydids with spiny forelegs. In particular the ventral margins of the fore tibiae are equipped with usually five pairs of long opposing spines, enabling the legs to be used as a catching basket to grab small arthropods. So far of only three unidentified Phlugis  species the male’s calling song is known (see discussion). Here we describe the song of Phlugis ocraceovittata  , along with some observations on activity and predation. Individuals of this species were found at night on understory vegetation near the Base de Estudos do Pantanal, a field station of the Universidade Federal de Mato Grosso do Sul located in the Pantanal region of southwest Brazil (municipality Corumbá), between 11 and 13 December 2015.

One of two collected males was accommodated for about a month in a cubic mesh screen cage with 30 cm edge length (BioQuip Products), furnished with a linden twig standing in a small container with water. The cage was situated close to a window and half of it received sunlight in the afternoon. The katydid was provided daily with fresh cucumber or apple pieces and sometimes small live insects. Its calling activity was monitored occasionally with a heterodyne ultrasound detector D 200 (Pettersson Elektronik). Sound recordings were made (from December 19 to 25) with an ultrasound detector D 1000 X (Pettersson Elektronik), using sample frequencies of 100, 200 and 300 kHz. Temperature was measured with a small digital multi-function instrument Highgear AltiTech 3. Sound analysis was done with Avisoft-SASLab Pro (Avisoft Bioacoustics). The stridulatory file was photographed with a Micrometrix digital camera mounted on a Nikon SMZ 1000 stereomicroscope, using the focus stacking software Combine Z 5. Recordings and larger photographs are available on Orthoptera  Species File Online (Eades et al.), in the following abbreviated as OSF.

Identification: The specimen is identical to the four male syntypes of Phlugis ocraceovittata Piza 1960  (photos in OSF). They are from Piracicaba in the State of São Paulo, about 1000 km ESE from the new locality (map in OSF). The specimen has an eponymous ochre median stripe on the pronotum, darkly annulated antennae, and a conspicuous subgenital plate with a dorsal tooth on each apical lobe ( Fig. 2View FIGURE 2 A,B,C,E). Measurements coincide well with the original description, only the tegmina seem to be slightly shorter (15 mm vs. 16–18 mm).

Stridulatory apparatus: The functional stridulatory file on the base of the left tegmen is exceedingly short, considerably less than 1 / 2 mm ( Fig. 2View FIGURE 2 D). No more than 30 toothlets are discernible on various photographs taken through the stereomicroscope. The mirror on the base of the right tegmen is oval and measures approximately 0.5 x 0.8 mm. The harp’s dimensions are 0.4–0.5 mm x 1.5 mm.

Song: The male called very continuously, sometimes up to three or four minutes without interruption. Mostly the uninterrupted calling sequences were shorter, from a few seconds up to about one minute. During activity periods they were repeated with pauses of some seconds up to several minutes. This continuous calling is composed of calls with a constant repetition rate (9 calls per second at 25 °C), each call consisting of three syllables (tegmina moving cycles), and a syllable being a short crescendo of distinct and rapidly decaying impulses, most probably corresponding to individual tooth-scraper impacts ( Fig. 3View FIGURE 3 A,B). The calling song of this species is entirely in the ultrasound, with a fairly broad carrier frequency spectrum between 40 and 60 kHz ( Fig. 3View FIGURE 3 C). The male was calling about equally frequently at day and night, intermittently from 8:00 a.m. to 1:00 a.m. (no monitoring occurred between 1: 30 a.m. and 6:00 a.m.).

Observations: Most of the time the katydid remained quietly on one spot. A few times it was observed moving slowly around, sometimes with horizontal movement of the anterior portion of the body. Also at night it changed the spot between calling bouts. When disturbed (e.g. renewing provisions) it was able to move very swiftly, half jumping, half flying. Once it was found with a leafhopper held in its forelegs, later this insect was found on the cage floor with the sternum eaten away and hollow thorax. A second leafhopper was found in the same condition.

Both insects were 11 mm long (including wings). Small grasshopper nymphs, beetles, flies and moths were not attacked. When a stalk with part of an aphid colony was brought into the cage, the insects dispersed and walked through the entire cage for 1–2 days, without the Phlugis  seeming interested. Once the katydid was seen standing on an apple piece.

Bioacoustics: The continuous song with high carrier frequency of Phlugis ocraceovittata  is somewhat similar to the ones of two unidentified Phlugis  species from Trinidad ( Suga 1966). One species produces series of 700–800 ms long call sequences, in the other length of sequences varies between 400 ms and 3 seconds, in both cases consisting of regularly repeated ungrouped syllables. Frequency spectra are 44–50 kHz and 40–70 kHz respectively. The first species was calling from late morning to sunset, and the second seems to be diurnal as well. The carrier frequency of another unidentified species of Phlugis  from Colombia peaks at 48 kHz (Montealegre-Z. et al. 2006). Very few other songs of Phlugidini  are reported. The male of Asiophlugis thai  from Thailand produces a courtship song in the presence of females, which seems to be fairly continuous, with a frequency spectrum of 30–50 kHz ( Helfert & Sänger 1998). Among three Australian species, Austrophlugis malidupa  could be heard calling with an ultrasound detector at day and night ( Rentz 2001), Indiamba malkini  only during the day ( Rentz 2001) and Lucienola pitti  as well ( Rentz 2001, Rentz 2010). Males of Phlugidia usambarica  from East Africa produced uninterrupted call sequences of more than one minute up to 8 minutes, with a carrier frequency peak between 40 and 50 kHz, calling only during the day (K.-G. Heller & C. Hemp unpubl.). Other Phlugis  species have slightly longer stridulatory files than Ph. ocraceovittata  , ranging in twelve species (mostly from Peru) from 0.49 to 1.23 mm, with tooth numbers between 37 and 82 ( Nickle 2003, 2005). The high carrier frequency is certainly related to the overall small dimensions of the stridulatory apparatus and the small number of teeth on the file (Montealgre-Z. 2009).

Alimentation and behaviour: Apparently Phlugis ocraceovittata  is not exclusively predacious. It seems impossible that the katydid could have lived for more than five weeks feeding on only two small leafhoppers. On a photograph taken at night in the wild it looks like the katydid is feeding on grass seeds ( Fig. 1View FIGURE 1). When moving inside the cage during the day, the male sometimes showed a conspicuous left to right movement of the anterior portion of the body, which is also reported for the Phlugis  species from Trinidad, there prior to jumping 20–30 cm from one leaf to another ( Suga 1966). So the katydids seem to use triangulation to estimate the distance to something, perhaps also to potential prey items. However, Phlugis teres  from Suriname is reported to be a sit-andwait predator, lurking on the underside of leaves in the sun, where the shadow of landing insects tells the katydid their size and suitability as a meal, in which case it will launch itself swiftly from under the leaf onto the victim ( Naskrecki 2013). The big eyes ( Figs. 1View FIGURE 1, 2View FIGURE 2 C) indicate excellent vision. 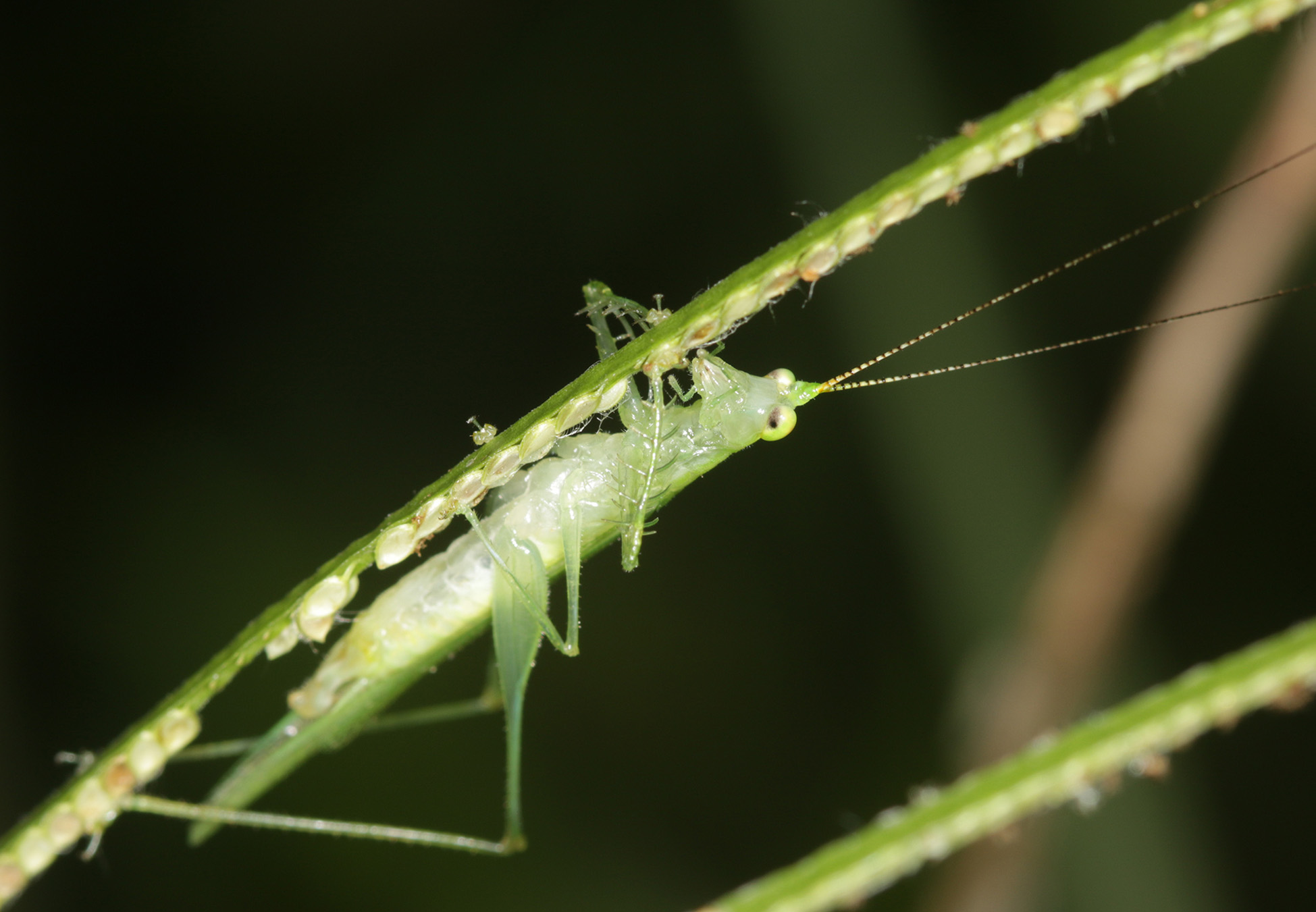 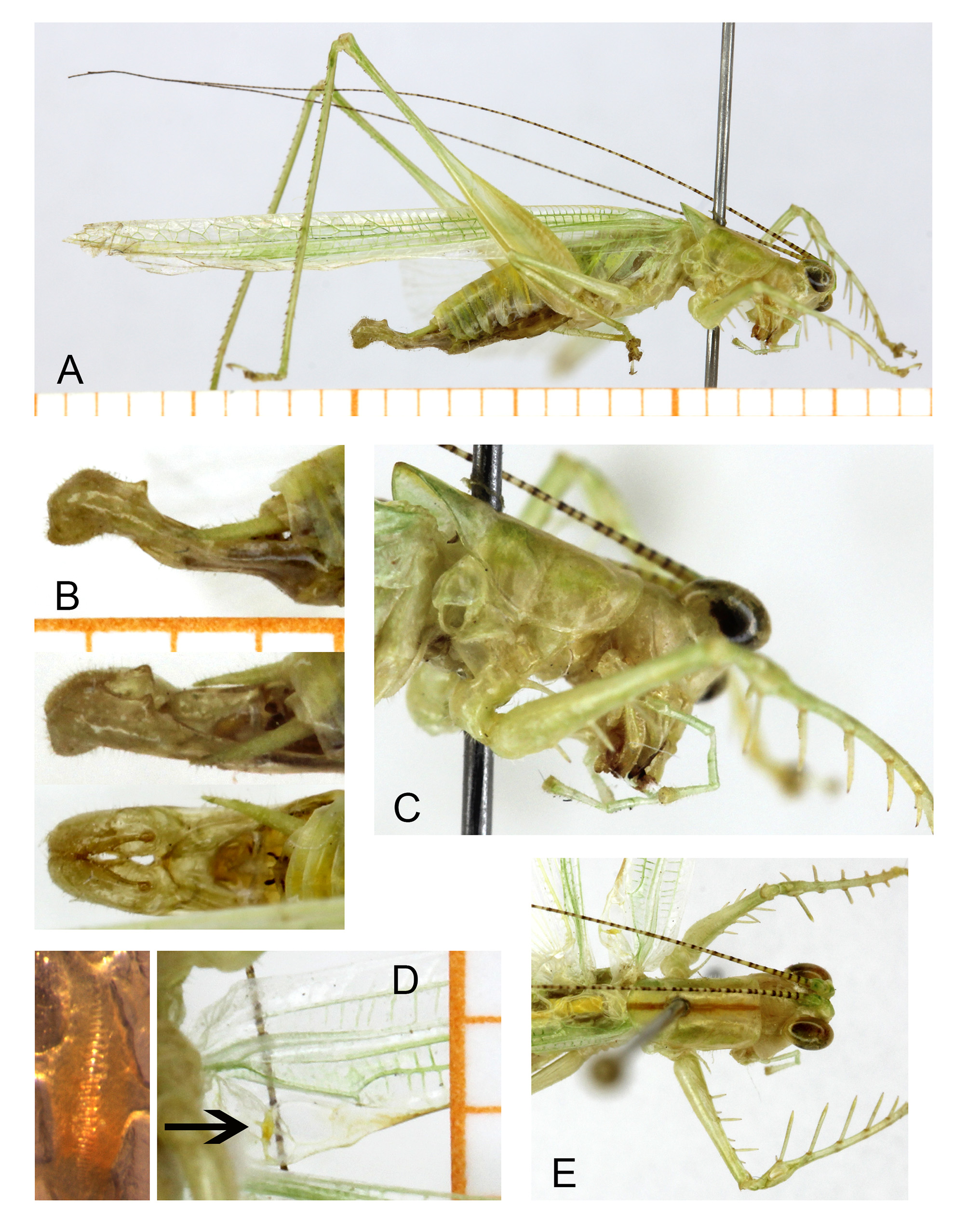 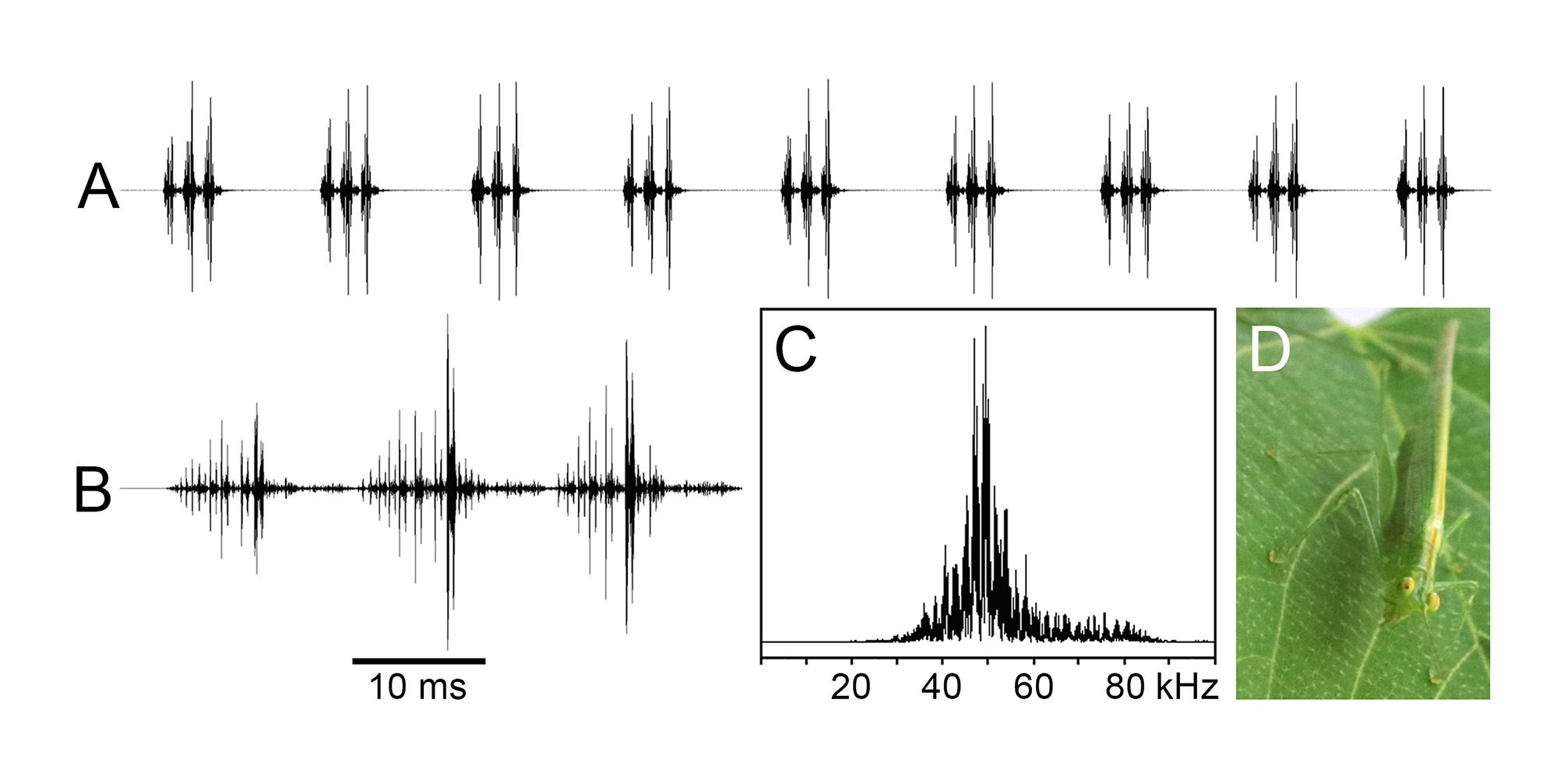