Diagnosis. A rather large cophyline with expanded finger disks that does not closely resemble any other microhylid from Madagascar. Plethodontohyla fonetana   differs from almost all other cophylines with expanded terminal finger disks (of the genera Plethodontohyla   , Stumpffia   , Anodonthyla   , Cophyla   and Platypelis   ) by larger size (54–65 mm versus 14–42 mm SVL). Only two remaining cophyline species with enlarged fingertips are larger: Platypelis grandis   (43–105 mm SVL) and Plethodontohyla inguinalis   (SVL 55–100 mm). Platypelis grandis   differs by much wider finger disks and granular dorsal skin; for a distinction from Plethodontohyla inguinalis   , see below. Plethodontohyla fonetana   is also immediately recognizable among all other Madagascan microhylids by its characteristic dorsal coloration (ground color light brown with well delimited blackish reticulation). Plethodontohyla fonetana   appears to be most closely related to other congeneric species with expanded terminal finger disks ( P. inguinalis   , P. mihanika   , P. notosticta   and P. guentheri   ). It differs from these four species by the lack of a distinct dorsolateral border in coloration posterior to the forelimbs, and by two continuous, elevated and sinuous dorsal ridges running from ca. 5 mm behind the eyes to ca. 10 mm in front of the cloaca. Moreover, it differs from P. mihanika   , P. notosticta   and P. guentheri   by much larger size (54–65 mm versus 26–42 mm SVL).

Coloration. In preservative, dorsum brown with a reticulated pattern of distinct black spots of irregular shape and few small white dots. The dark spots are fused to a large, faintly symmetrical, black spot behind the eyes. Towards the flanks the brown ground color changes to light brown, the dark pattern fades to brown, and the whitish dotting becomes more dense. The two dorsal ridges are white and a similar narrow white line is running along the supratympanic fold. Sides of head and tympanic region blackish, sharply bordered by the supratympanic fold. Forelimbs and hindlimbs brown with narrow dark crossbands and white spotting. Highest density of white spots on the posterolateral and anterolateral parts of the shanks. Ventrally, throat dark brown with fine light dots, chest brown with larger white dots and spots, the light color becoming predominant towards the belly. The color in life was similar ( Figs. 1–2 View FIGURE 1 View FIGURE 2 ), perhaps somewhat lighter than in preservative. The iris was greyish with a slightly greenish shade.

Natural history, distribution and threat status. Very little information is available. The two type specimens are gravid females. The holotype contained more than 100 (more than 50 on each side) yellowish eggs with a black pole, ca. 2.0– 2.4 mm in diameter, indicating that the specimen was ready for reproduction at the end of the rainy season. The stomach of the holotype contained a large number of medium-sized insect remains (ants, beetles) and pieces of dead leaves from the forest floor. The holotype was found in a night without rainfall on Tsingy rocks within a moderately moist dry forest. In March 2006, our pitfalls at three other sites in the Tsingy de Bemaraha National Park failed to capture any additional Plethodontohyla   specimen. The paratype was captured by a pitfall trap next to Tsingy rocks with dead leaves (soil composition: sand and clay complex). Both type specimens were found in the same forest (Bendrao). Accordingly, the known range of the species is extremely small ( Fig. 4 View FIGURE 4 ). Although the actual range is very likely to comprise a larger area, we assume that the new species is endemic to the Tsingy de Bemaraha massif due to the absence of sufficient humidity outside the karstic habitats. Using the same rationale and IUCN criteria as applied during the Global Amphibian Assessment for Madagascan amphibians (see Andreone et al. 2005a) we classify Plethodontohyla fonetana   as "Data Deficient".

Etymology. The specific name "fonetana" is the Malagasy word for "stubby" and refers to the general body shape of the new species. It is used as a noun in apposition. 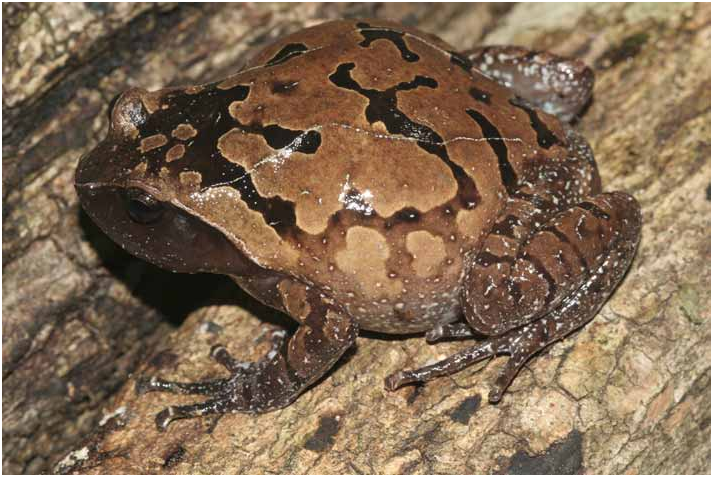