Rhinolophus simulator is in the capensis species group and seems to be close to R rhodesiae , R gorongosae , and a Liberian specimen of R landeri based on recent genetic findings. Rhinolophus alticolus is usually included as a subspecies of R simulator but is considered a distinct species here based on its morphological distinction and distributional discontinuity. Monotypic.

Descriptive notes. Head-body c. 44-56 mm, tail 19-29 mm, ear 18-23 mm, hindfoot 7—10 mm, forearm 42—49 mm; weight 5-1—11- 2 g. Dorsal pelage is highly variable, with records of dark sepia-brown, medium brown, grayish fawn, brownish gray, and gray, sometimes with yellowish hue (hairs are paler at bases). Ventral pelage is distinctly paler and sometimes whitish. No orange morph is known, although there is an apparent report from East Africa that needs to be confirmed. Males lack axillary tufts. Ears are medium in length (40-50% of forearm length). Noseleaf has subtriangular, strongly hastate lancet (distinctly different from that of the Cameroon Horseshoe Bat, R alticolus )', connecting process is rounded and subequal to height of sella (thinner than in the Cameroon Horseshoe Bat); sella is naked, with sides nearly parallel or slightly concave; narial lobes at base of sella are comparatively well developed; horseshoe is narrow at 6-7- 9 mm, with very indistinct lateral leaflets and deep notch on anterior emargination. Lower lip has three grooves, and lateral grooves are indistinct in some specimens. Wings are dark brown or dark grayish brown, and uropatagium is nearly black. Skull is delicately built, with thin zygomatic arches and zygomatic width less than or equal to mastoid width; nasal swellings are relatively high and rounded; frontal depression is moderately deep; sagittal crest is very underdeveloped, being very low; and palatal bridge is 29-34% oflength of upper tooth row. Dental formula has 30 or 32 teeth when P3 is absent; P2 is small to medium-sized and in tooth row, separating C1 and P4; j is smaller basally than C1; and P3 is tiny and completely displaced labially or absent in some individuals, allowing contact between P2 and P4. Chromosomal complement has 2 n = 58 and FNa = 60 ( South Africa).

Habitat. Primarily wet woodland savannas and associated water sources. In East Africa, Bushveld Horseshoe Bats have been recorded in Brachystegia ( Fabaceae ) dominated woodland savannas and some montane and coastal mosaic habitats. In South Africa (KwaZulu-Natal), they are found associated with valley bushveld near major rivers. They are probably found near roosting caves, which are presumably the largest indicator of distributional patterns.

Food and Feeding. Bushveld Horseshoe Bats forage by slow hawking and possibly gleaning. They are known to forage near lights at night. Stomach samples of 34 individuals in wet season in Zambia contained moths (73% by volume), beetles (13%), termites (8%), crickets (5%), and various other insects. During dry season, stomach samples of 18 individuals contained moths (87%) and midges (13%).

Breeding. The Bushveld Horseshoe Bat is seasonally monoestrous. In Zimbabwe, spermatogenesis occurs approximately in May, and sperm is stored in epididymis for three months at least through dry season. Copulation occurs in late June to July, and implantation occurs in July. In Zimbabwe, births have been reported in mid-November in wet season after gestations of 90-130 days. Variable lengths of gestations depend on whether delayed implantation in the female occurred or not. Juveniles were volant at less than three weeks old in Zimbabwe. In Malawi and Zambia, births were also reported in wet season in November. Increase in scrotal size was reported from April toJuly in South Africa, indicating that copulation most likely occurs in winter. In South Africa, pregnant females were captured in September, and lactating females were captured inJanuary.

Activity patterns. Bushveld Horseshoe Bats are nocturnal, spending the day in their roosts and foraging at night. They become torpid during the day in dry seasons in Zimbabwe but not in wet seasons. Roosts have been recorded in wet and dry caves and abandoned mines. Call shape is FM /CF/FM, with F component of 78 kHz in Zimbabwe (although this is low for the Bushveld Horseshoe Bat, indicating that the individual might have been misidentified), 84-86 kHz in Malawi, 83-2-84-4 kHz in Swaziland, and 80-6—83 kHz in South Africa. Call durations have been recorded at 7—19 milliseconds in South Africa and Swaziland and 24—34 milliseconds in Malawi. Differences in call frequencies across the distribution of the Bushveld Horseshoe Bat vary based on latitude, geography, and climatic differences.

Movements, Home range and Social organization. Colonies of Bushveld Horseshoe Bats consist of several dozen individuals, although colonies with c.150 individuals and C.300 individuals have been reported in South Africa. Individuals hang in their roosts in clusters but do not touch each other. Females form maternity colonies in spring. The Bushveld Horseshoe Bat has been recorded roosting with species of Nycteris , Hipposideros (in one cave, each species was found roosting in separate chambers), Miniopterus , and other Rhinolophus .

Status and Conservation. Classified as Least Concern on The IUCNed List. The Bushveld Horseshoe Bat is threatened largely by cave disturbance and general habitat loss from agricultural expansion and mining operations. Populations are declining throughout the distribution. 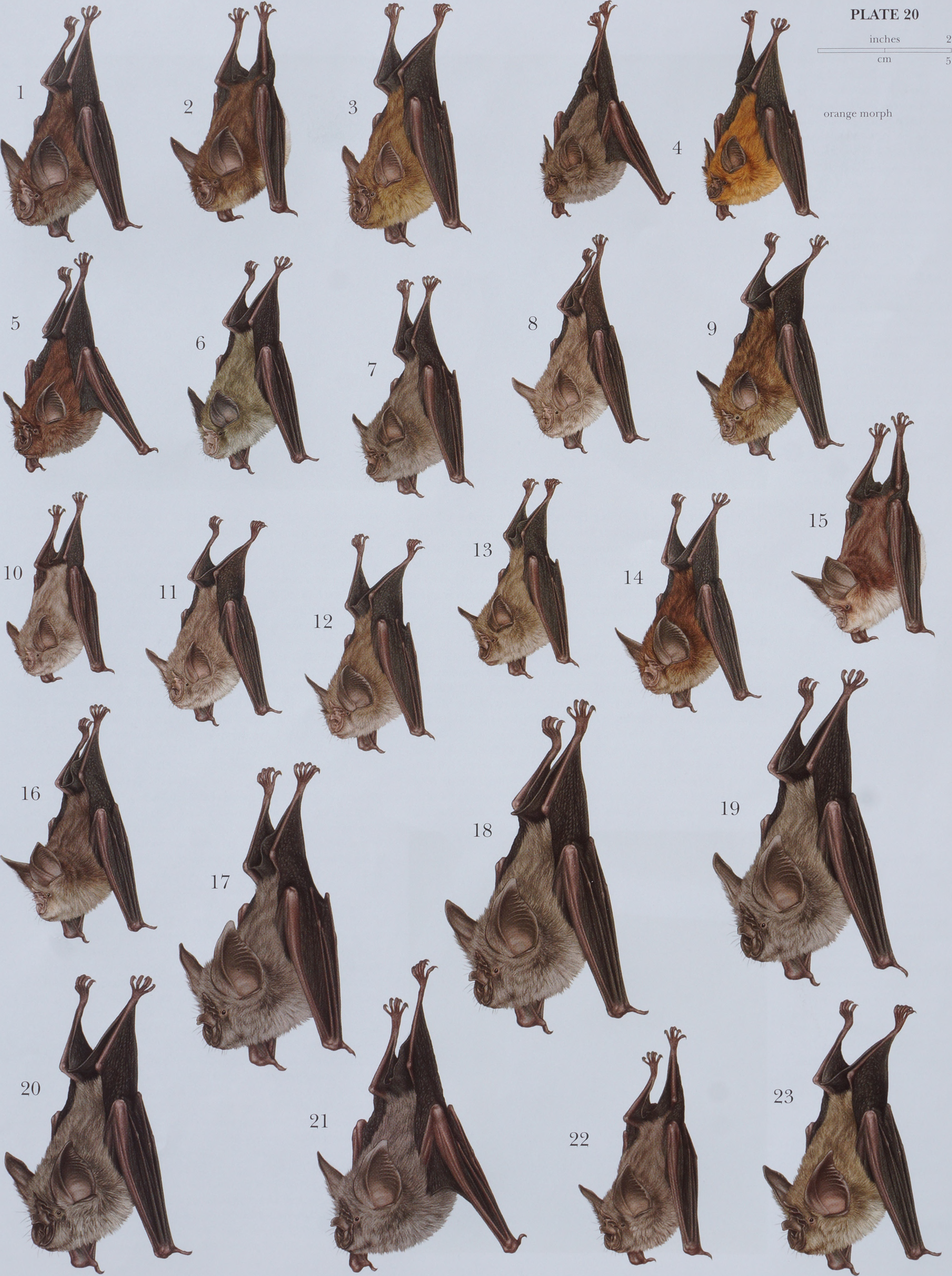 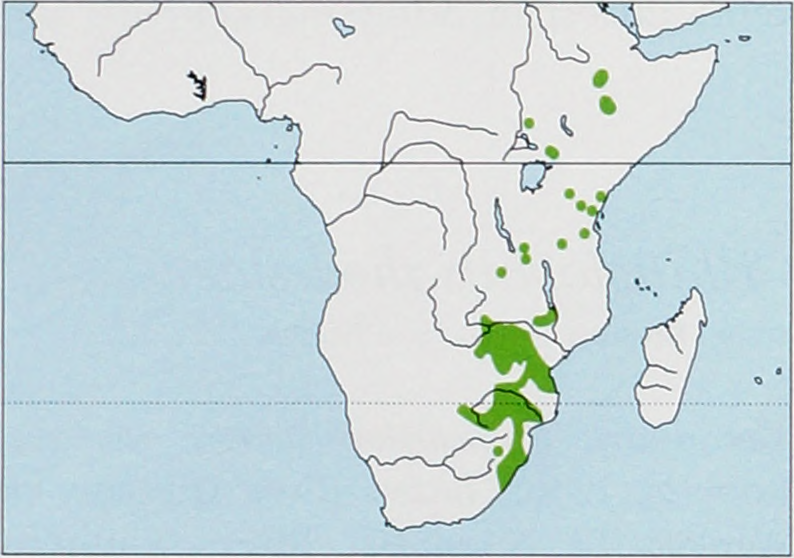