Head about 4.5–5.0× as wide as frontovertex, with smaller specimens generally having a relatively wider frontovertex; eye clothed in setae hardly longer than diameter of facet; frontovertex with fine, very regular, polygonally reticulate sculpture of cell size hardly more than half diameter of eye facet, slightly granular in appearance; ocelli forming an angle of about 50°; antenna ( Figure 2View Figure 2 (a)) with scape varying from 3.1× to 3.5× as long as broad, F1 varying from 1.5× to 1.9× as long as broad and about 0.7× as long as pedicel; apex of clava slightly obliquely truncate; mandible tridentate, palp formula 4–3. Relative measurements: HW 173, FV 37, POL 17, OOL 1.5, OCL 13, SL 86, SW 24.5.

Head about 2.5× as wide as frontovertex; eye clothed in setae hardly longer than diameter of facet; frontovertex with slightly irregular, polygonally reticulate sculpture of cell size hardly less than diameter of eye facet, slightly coarse in appearance; ocelli forming an angle of about 80°; antenna ( Figure 2View Figure 2 (f)) with scape 1.9× as long as broad, F1 about 3.5× as long as broad and about 3.3–3.6× as long as pedicel, smaller specimens having a relatively shorter F1; flagellum clothed in dense short setae, dorsal setae apically slightly curved, ventral setae straight, the longest about 0.8× as long as diameter of segment.

Hosts. Reared from adult females of Phenacoccus aceris  ( Hemiptera  : Pseudococcidae  ) on Sorbus aucuparia  , Tilia sp.  , Malus sp.  and Ulex sp.  The males are solitary or gregarious with up to 3 males emerging from a single host; the females are almost always solitary. Recorded from the same host by Ferrière (1955), Schmutterer (1955) and Sentenac and Kuntzmann (2003). The record of Phenacoccus piceae (Löw)  as a host ( Noyes and Hayat 1994) is erroneous as it is based on the above record from Ferrière (1955). Also recorded as an egg predator of Kermes quercus Linnaeus  , K. roboris Fourcroy  and K. corticalis Nassonov  (see Trjapitzin 1989).

Distribution. Recorded here for the first time from the Isle of Man, but previously recorded from many European countries, from Sweden, the United Kingdom and Spain to Ukraine and the Transcaucasus (see Trjapitzin 1989; Noyes 2019).

The adults emerged from the mummified mealybugs about 2–4 weeks after collection.

Comments. Among the known species of Microterys  recorded as parasitoids of mealybugs, M. chalcostomus  appears to be most similar to M. subcupratus ( Dalman, 1820)  , the only other Palaearctic species known to parasitise this group of hosts where the female has the scape 3–4× as long as broad and a single hyaline band on the fore wing. The two can be readily separated by the colour of the head and F4. In M. chalcostomus  the head is largely orange and F4 is pale orange, whilst in M. subcupratus  the head is completely black with violet and metallic green reflections and F4 is dark brown. The colour of female antennae seems to be reliable for separating the species of this genus. In northern Europe, females of M. chalcostomus  are also somewhat similar to those of M. cyanocephalus (Dalman)  , but differ in having the frontovertex, F5 and F6 pale orange, whereas in M. cyanocephalus  the head is dark brown and only F6 is pale orange. 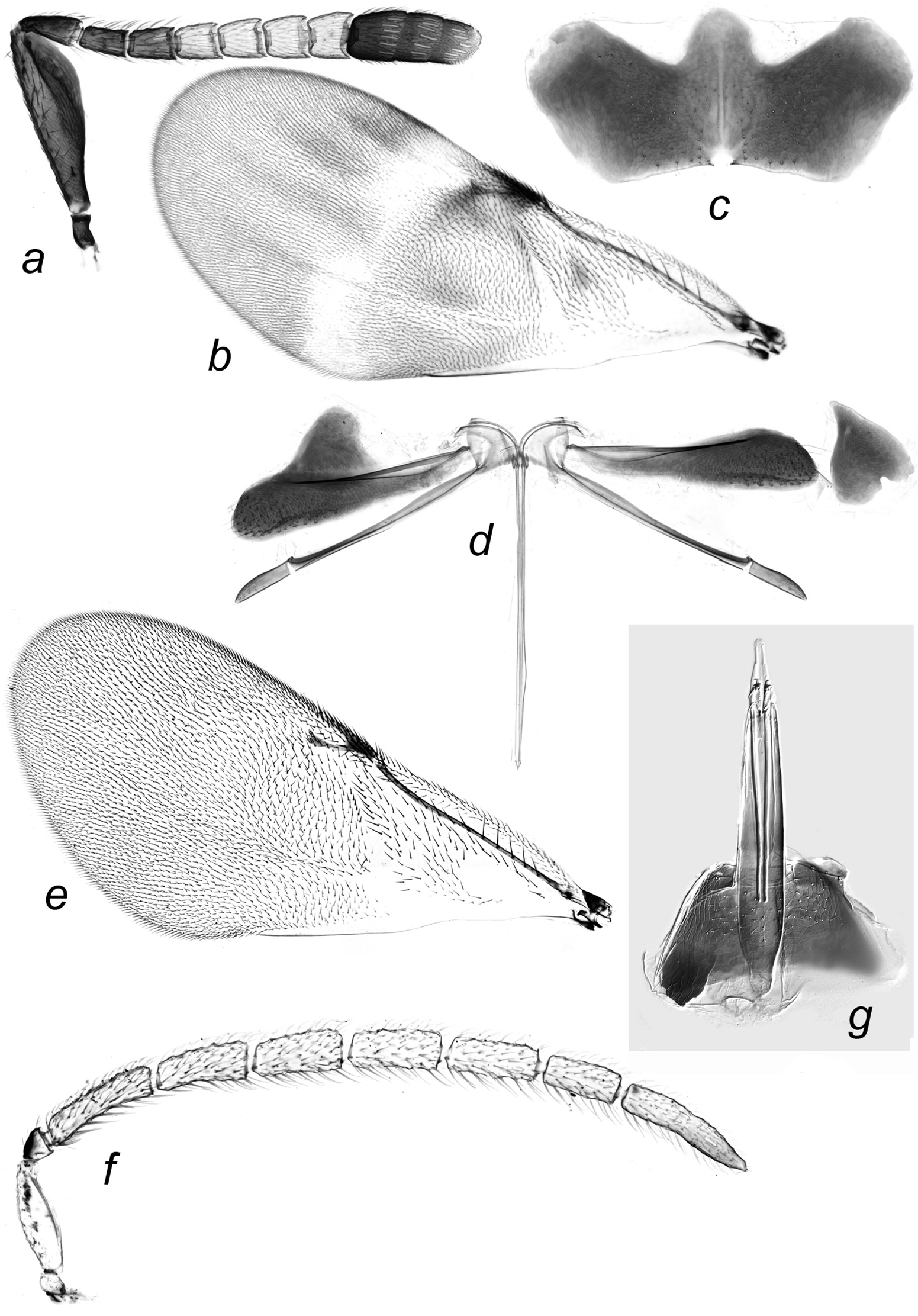