Remarks. The recently described Axianassa darrylfelderi   was previously only known from the type material from Bahía Málaga, Colombia ( Anker & Lazarus 2015). The two specimens collected on the eastern coastline of Panama’s Azuero   Peninsula represent only the second record of A. darrylfelderi   and also the first record of the species for Panama. They match the type material from Colombia in all diagnostic characters.

A thorough examination of the Panamanian specimens of A. darrylfelderi   revealed the presence of five (male) and one to three (female) teeth and a small movable spinule or spiniform seta (in both male and female), the latter obscured by the adjacent plumose setae, on the distolateral margin of the uropodal exopod. This observation prompted a re-examination of the male paratype from Colombia ( MZUSP 33014), which was confirmed to have only one tooth and one spiniform seta, the latter having been either overlooked (being concealed by the adjacent thick plumose setae) or illustrated as a fixed tooth in Anker & Lazarus (2015: fig. 1 K). Four Brazilian specimens of A. australis   , viz. the male holotype from Bahia ( MZUSP 10584), the male paratype from São Paulo ( MZUSP 11105), a male from Ceará ( MZUSP 32611), and an ovigerous female from Bahia ( MZUSP 32131), were also examined. Each of them was found to have one to three fixed teeth and one spiniform seta on the uropodal exopod, which suggests that the description “rami without spines” and the illustration of the uropod of A. australis in Rodrigues & Shimizu (1992: p. 319, fig. 20)   are incorrect. Thus, both species have at least one fixed tooth and a small spiniform seta on the distolateral margin of the uropodal exopod.

The antennal acicle was illustrated as relatively short, not reaching 0.25 length of the fourth article, in the original description of A. australis   by Rodrigues & Shimizu (1992: fig. 3). Our examination of the holotype and two other Brazilian specimens of A. australis   shows that the acicle tip indeed reaches at most to about 0.25 length of the fourth article, thus being somewhat shorter than the acicle of A. darrylfelderi   , which is closer to 0.35 length of the fourth article ( Anker & Lazarus 2015). In contrast, the armature on the cutting edge of the pollex of the male minor cheliped does not seem to be a reliable character to separate A. darrylfelderi   from A. australis   , because two strong double teeth are present at least in one Brazilian specimen of the latter species ( MZUSP 32611).

During our search for other morphological characters distinguishing A. darrylfelderi   from A. australis   , we noted that the former species is variable in the number of teeth on the dorsomesial surface of the third maxilliped coxa. Three specimens, viz. the ovigerous female from Panama ( MZUSP 34489), as well as the holotype (cf. Anker & Lazarus 2015: fig. 1 H, I) and paratype ( MZUSP 33014) from Colombia have two small adjacent teeth, whereas one male from Panama ( MZUSP 34081) has only one larger tooth, as in A. australis   (cf. Rodrigues & Shimizu 1992: fig. 9). In males of A. darrylfelderi   , the lateral surface of the third to fifth pleura is covered by a fine pubescence composed of numerous long setae ( Anker & Lazarus 2015: fig. 4 A). In males of A. australis   , this pubescence appears to be much denser, especially on the fourth and fifth pleura ( Rodrigues & Shimizu 1992: fig. 1), sometimes obscuring the pleural margins. The palm-finger height-length ratio of the male major cheliped appears to be higher in A. darrylfelderi   than in A. australis   , but this may only be true for very large males (cf. Anker & Lazarus 2015: fig. 2 A, B; Rodrigues & Shimizu 1992: fig. 12). In summary, the extent of variation of the aforementioned characters cannot be evaluated based on the currently available material. Nevertheless three of them are tentatively included in the key below as morphological differences between these two geographically separated cryptic taxa. Molecular analyses, e.g., of the barcoding segment of COI, are highly desirable to confirm the validity of A. darrylfelderi   . 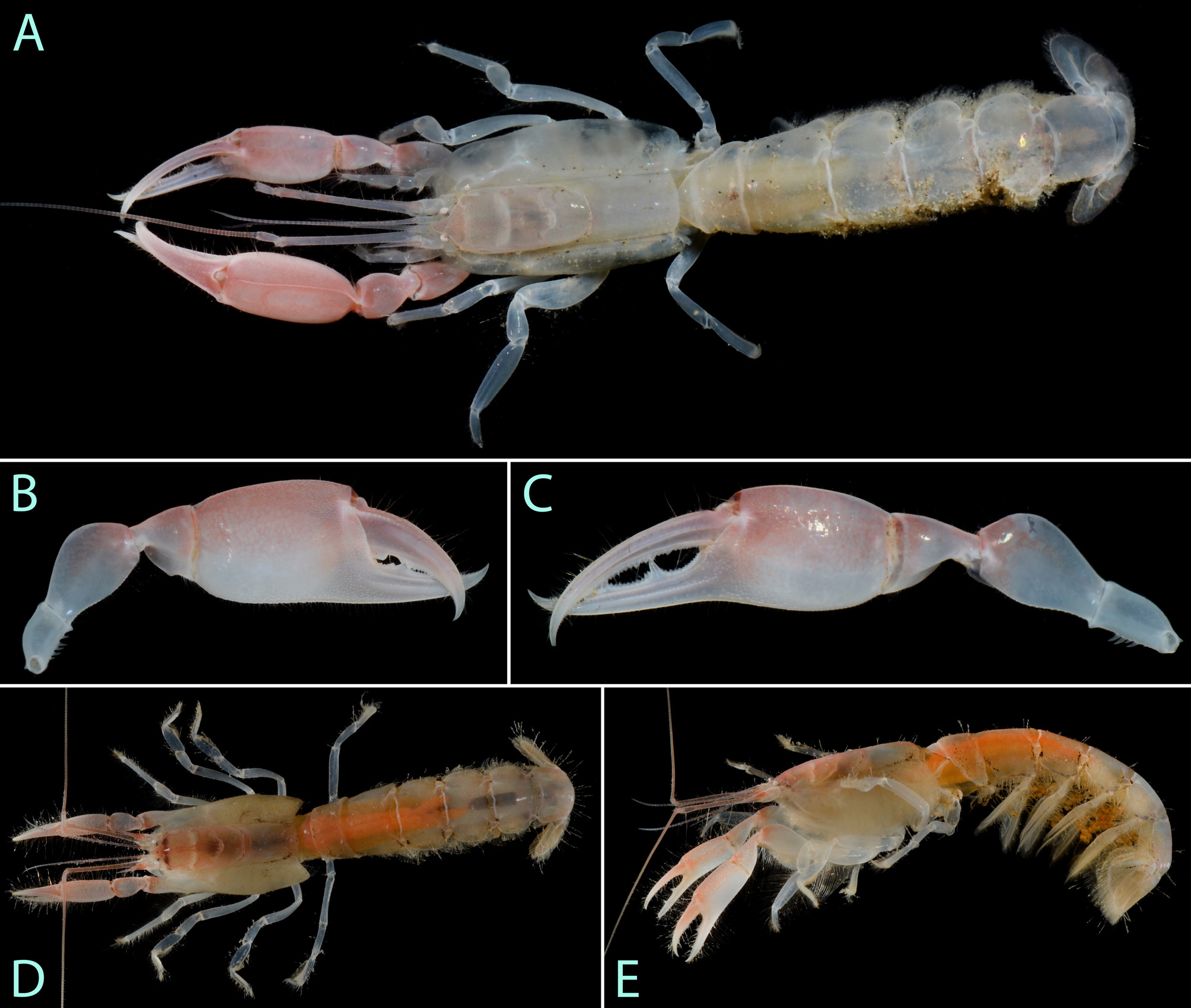