This new species, as distinguished from Alcantarea duarteana   , the closest relative, is characterized by the ovate leaf sheaths, which are distinct and contrasting with the leaf blades (vs. narrowly subtriangular-ovate, gradually merging into the blades), having flat leaf blades toward the apex (vs. distinctly canaliculate throughout), which are arcuate-recurved to reflexed (vs. erect to arcuate but never recurved or reflexed) and inconspicuously lepidote toward the base and abaxially (vs. distinctly and densely white lepidote), peduncle bracts that are flat toward the apex (vs. canaliculate throughout), being recurved or reflexed (vs. straight or nearly so), the basal to median primary bracts distinctly exceeding the branches (vs. only the basal ones exceeding the branches or all equaling to shorter than the branches) and the smaller petal appendages (10–14 × 1.5 mm vs. 20–21 × 2–2.2 mm), which are distinctly bidentate to acute (vs. inconspicuously dentate).

Plants rupicolous, stemless, flowering 100–180 cm high. Leaves 20–22 in number, rosulate, forming a narrow funnelform rosette; sheaths ovate, 11–18 × 7–12.5 cm, distinctly contrasting in shape with the blades, subdensely and inconspicuously brown lepidote, pale green toward the apex, coriaceous; blades narrowly subtriangular, not narrowed at the base, 34–55 × 2.5–5.5 cm, green, inconspicuously and sparsely white lepidote at the base adaxially, glabrous elsewhere, nerved, canaliculate near the base and flat toward the apex, arcuate-recurved to reflexed, apex acuminatecaudate, apical margins sometimes slightly revolute. Peduncle 58–75 cm long, 0.8–2 cm in diameter, erect, glabrous, green; peduncle bracts foliaceous and much exceeding the internodes, almost completely covering the peduncle, recurved or reflexed, red near the base and green toward the apex, flat toward the apex or revolute along the apical margins. Inflorescence shortly paniculate, subdensely once branched, 30–80 cm long (including the terminal branch), 12–15 cm in diameter, erect; main axis straight, green to reddish, glabrous, 0.8–1.5 cm in diameter at the base and to median portion of the inflorescence, highlighting the comparatively short primary bracts. F. Habit.

0.6–0.7 cm in diameter at the apex, internodes 1.5–4 cm long; primary bracts the basal to median ones subfoliaceous and similar to the upper peduncle bracts, distinctly exceeding the branches, without water-holding capacity; the upper ones ovate-lanceolate to broadly ovate, apex long caudate to acuminate-caudate, 5–9 × 3–4 cm, subspreading, recurved toward the apex, glabrous, reddish or red toward the base and green near the apex, equaling to slightly shorter than the branches; branches 11–22 in number (including the terminal one), 1.5–4 cm apart, the lateral branches 7–16 cm long, erect or nearly so except for the subspreading apex, subdensely flowered at anthesis, with 3–8 flowers, usually bearing sterile bracts at the apex; rachis nearly straight at the base to geniculate near the apex, slightly angulose, 5–20 x 3–4 mm, glabrous, green; stipe 15–60 × 6–7 mm, slightly complanate, green, glabrous, ebracteate or bearing a single bract at the distal end in robust specimens; the terminal branch erect, similar to the lateral branches, subsessile, with 5–9 flowers; floral bracts ovate-elliptic, 27–40 × 20–22 mm, equaling 1/2 to 3/4 sepal length, carinate (the upper ones obtusely so), thin in texture, apex acute, incurved, greenish or the basal ones reddish toward the base and greenish near the apex, glabrous or nearly so. Flowers distichous, divergent, not secund, slightly fragrant, 85–90 mm long (with extended petal); pedicels 9–10 × 6–7 mm, subcylindrical, green, glabrous; sepals symmetric, narrowly obovate-elliptic, (27–) 30–35 × 14–15 mm, cymbiform, glabrous, free, ecarinate, green at the base and greenish-yellow toward the apex, thin coriaceous, apex rounded; petals sublinear, apex obtuse-emarginate, 74–85 × 8–9 mm, yellow, strongly helicoid recurved at anthesis, completely exposing the stamens, becoming pendent-flaccidescent afterwards, bearing 2 linear, acute to distinctly bidentate, 10–14 × 1.5 mm appendages at the base, that are adnate to the petals for 7–11 mm; stamens straight; filaments terete, white, the antesepalous ones free, the antepetalous ones subfree; anthers linear, 8–9 mm long, filiform at anthesis, dorsifixed near the base, distinctly shorter than the petal length; pollen ellipsoid, ca. 70 µm, sulcate, sulcus with distinct margins but not sharply cut, sparsely bearing low exine elements, exine broadly reticulate, lumina subrounded, muri narrowed; style slightly shorter than the petal length, white; stigma conduplicate-spreading, blades slightly contorted with recurved apices, densely papillose, white, ca. 3 mm long. Capsules unknown.

Distribution and habitat:–– Alcantarea recurvifolia   has a similar habit like its closest relative, A. duarteana ( Smith, 1968: 80) Grant (1995: 13)   . It was found as a typical rupicolous species of the Campos Rupestres of the Diamantina Plateau, in the county of Gouveia, Minas Gerais, where it has a scattered occurrence of isolated or fewaggregated individuals under intense sunlight on bare quartzitic outcrops. In contrast, the known populations of A. duarteana   are concentrated northward in the neighboring county of Diamantina.

According to the “B1a” and “B2a” criteria adopted by IUCN (2010), A. recurvifolia   must be considered a critically endangered species.

Etymology:––The name of this new species is an explicit reference to the recurved leaf blades which allows its identification even when sterile.

Observations:––This new species is closely related to A. duarteana   , differing by the ovate leaf sheaths, which are distinct and contrast with the leaf blades (vs. narrowly subtriangular-ovate leaf sheaths, gradually merging into the blades); leaf blades flat toward the apex (vs. distinctly canaliculate throughout), arcuate-recurved to reflexed (vs. erect to arcuate but never recurved or reflexed), inconspicuously lepidote toward the base and abaxially (vs. distinctly and densely white lepidote); peduncle bracts flat toward the apex (vs. canaliculate throughout), recurved or reflexed (vs. straight or nearly so); basal to median primary bracts distinctly exceeding the branches (vs. only the basal ones exceeding the branches or all equaling to shorter than the branches); shorter petal appendages (10–14 × 1.5 mm vs. 20–21 × 2–2.2 mm), which are distinctly bidentate to acute (vs. inconspicuously dentate). An additional difference between A. recurvifolia   and A. duarteana   are the pollen grains: A. recurvifolia   has a sulcus with distinct margins, but not sharply cut margins as in A. duarteana   and has sparsely low exine elements, which are absent in A. duarteana   .

The protologue of A. duarteana   does not provide most of the morphological data used here to distinguish it from the A. recurvifolia   . However, the analysis of the holotype (HB!) and the isotypes (RB!) of A. duarteana   , as well as intensive field observation at the type locality in the county of Diamantina, allow the establishment of the differences highlighted here, mainly the distinctive features related to leaf rosette which is easily seen even in sterile specimens. 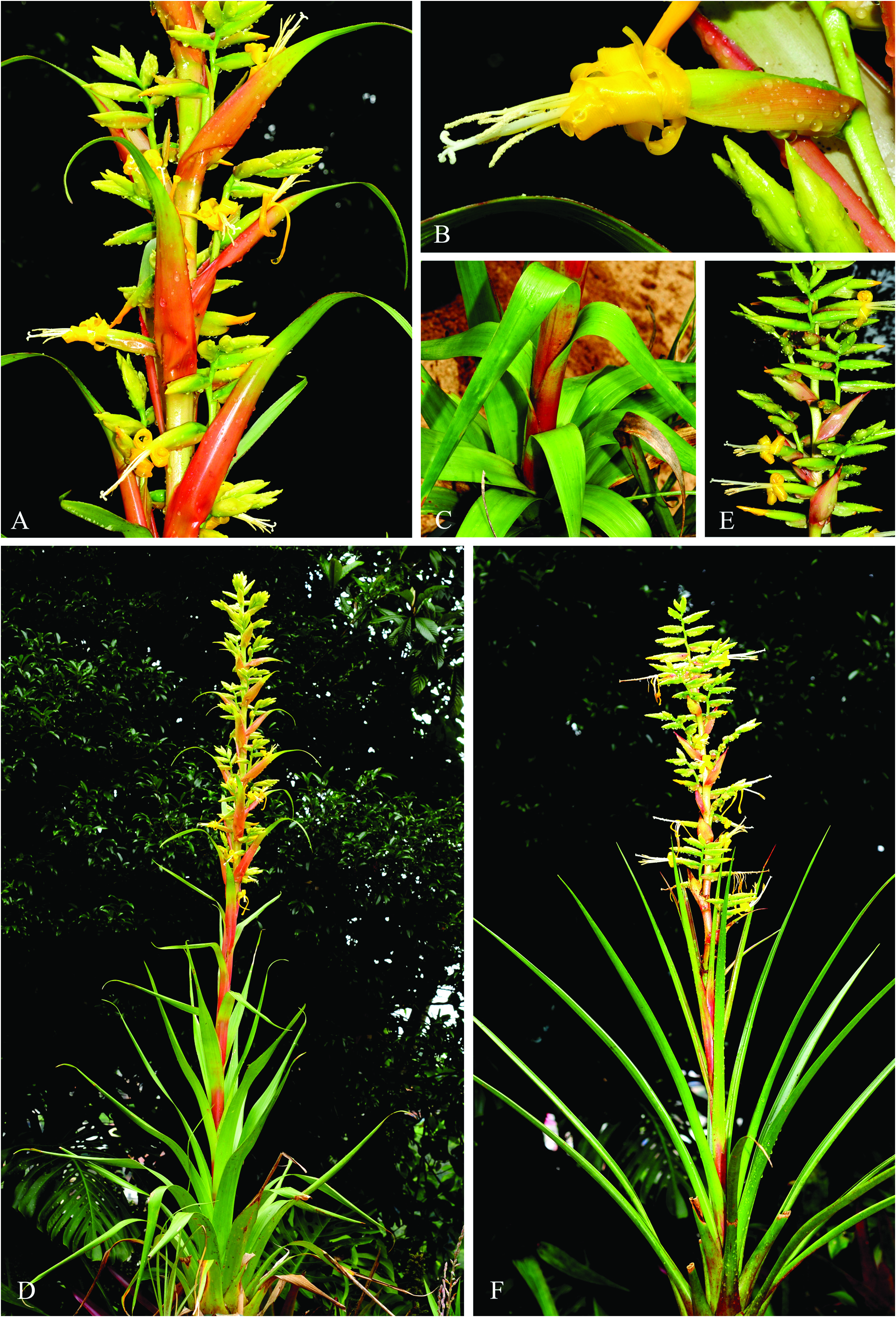