Differs from S. sublentum Hiern in its indumentum of strictly stellate eglandular trichomes and in its accrescent, but not inflated, cupuliform fruiting calyx; also differs from S. hexandrum Vell. in its more delicate habit, smaller flowers with white shallowly stellate corollas and in having accrescent, but not inflated, fruiting calyces that partially cover the mature fruits.

Shrubs 1-1.5 m tall, erect, armed. Branches directed upwards and spreading. Young stems moderately pubescent to tomentose and sparsely to moderately prickly; pubescence of ochraceo-ferruginous to purple-tinged porrect short- to long-stalked stellate trichomes, with multiseriate 0.5-1.5 mm long stalks, the rays 4-8, 0.5-1 mm long, the midpoints 1- to 2-celled, always shorter than the rays; prickles 4-6 mm long, 2-6 mm wide at the base, broad-based and recurved. Bark of older stems glabrescent, drying olivaceous to brown. Sympodial units plurifoliate, the leaves not geminate. Leaves simple, nearly entire to shallowly lobed, the blades 2.8-12.1(21.8) cm long, 2.2-7.5(10.1) cm wide, elliptic to ovate, membranous, slightly discolorous when dry; adaxial surface brown to dark green when dry, densely to moderately stellate-pubescent and prickly, the trichomes like those of the stem but with (1-)4-6 rays, the prickles along the midrib and major veins, to 5.5 mm long and 1 mm wide at the base, straight and laterally compressed; abaxial surface whitish-green when dry, more densely stellate-pubescent than the adaxial surface, the trichomes like those of the adaxial surface, the prickles like those of the adaxial surface but to 6.5 mm long and 2 mm wide at the base; base attenuate to truncate or rounded, less often with 1 or 2 basiscopic lobes, decurrent onto the petiole, sometimes asymmetrical; margins shallowly lobed, the lobes (0)3-5 on each side, 1-12(14.8) mm long, 3.2-11(23) mm wide at base with usually acute, sometimes rounded or obtuse apices, the sinuses 3.2-8.5 mm deep; apex acute to acuminate; primary veins 4-6 pairs, more prominent beneath, prickly on both surfaces; petioles 0.6-3.3 cm long, densely to moderately pubescent with porrect-stellate trichomes like those of the leaves, usually armed with 1-5 prickles. Inflorescence a monochasial cyme (drepanium) to 6 cm long, internodal, unbranched, with 4-10 flowers, up to 2 flowers open at a time, the axes glabrescent to densely tomentose, with trichomes like those of the stem but sometimes with the midpoint as long as the rays, usually unarmed; peduncles 0.4-2.3 (-3.8) cm long pedicels 3-17 mm long, 0.5-0.8 mm in diameter at base and up to 1.5 mm at the apex, straight to slightly curved, articulated at base, unarmed, with trichomes like those of the inflorescence axes; pedicel scars evenly spaced 1-7 mm apart. Buds ovoid to ellipsoid, with the corolla enclosed by the calyx until just before anthesis. Flowers 5-merous, heterostylous with long-styled flowers (hermaphroditic) at the base of inflorescence, short-styled (functionally male) flowers more distally and the plants andromonoecious. Calyx tube 2.6-4.3(6) mm long, 6.5-8 mm in diameter at anthesis, widely obconic to cupuliform, the lobes 3-7 mm long, 3-5.5 mm wide, triangular to deltate, with acute apices, glabrous adaxially, densely pubescent to hirsute abaxially with bristly purple-tinged, hyaline or ochraceo-ferruginous porrect to multiangulate long-stalked stellate trichomes, the stalks of the fully developed trichomes multiseriate, 1.1-3.8 mm long, rays 4-8 to 1.5 mm, the midpoints 1-2 celled, shorter than or the same length as the rays, associated with minute, nearly sessile, uniseriate, simple glandular trichomes along the epidermis and sometimes at the basal portion of the stellate trichomes stalks, armed or unarmed, the prickles acicular, 2.8-4 mm long, ca. 0.5 mm wide in flower to 1.1 mm in fruit. Corolla 2.4-3 cm in diameter, 7.1-12.2 mm long, white, shallowly stellate, interpetalar tissue nearly absent, lobed ca. halfway to the base, the fused part (tube) 7.1-12.2 mm long, the lobes 5.9-8.8 mm long, 9.9-12.2 mm wide, acute to apiculate apices, pubescent abaxially on the petal midvein and/or apices with sparse delicate short-stalked porrect-stellate trichomes with stalks to 0.9 mm long. Stamens equal; filament tube to 1 mm long; free portion of the filaments 0.7-1 mm long, glabrous; anthers 6.5-8 mm long, 2.5-3 mm wide, lanceolate, yellow, glabrous, connivent or divergent at the apices, sagittate and slighty gibbous at the base, swollen and papillose abaxially, the pores directed upwards or slightly extrorse, not lengthening to slits. Ovary somewhat conical, glabrous; style 8-10 mm long in long-styled flowers, ca. 3 mm long in short-styled flowers, straight, glabrous; stigma clavate to bilobed, the surface papillose and irregular, the style poorly developed in short-styled flowers. Fruit a globose berry, 0.9-1.8 cm in diameter, green to whitish-green at maturity, drying dark brown, glabrous, matte; fruiting pedicels 1-1.5 cm long, usually unarmed; fruiting calyx partially accrescent, the tube enclosing ½-¾ of the fruit at maturity, the lobes 5.8-8 mm long, 7-9.6 mm wide, with trichomes often with the base of the stalks markedly expanded and bristly, the stalks to 4.8 mm long. Seeds ca. 250 per berry, 2.2-2.6 mm long, 1.6-2 mm wide, pyriform to reniform, not markedly flattened, the surface irregularly pitted, the testal cells pentagonal in outline. Chromosome number not known.

Solanum hydroides inhabits the edge of seasonal semi-deciduous tropical rainforests associated with granitic or gneissic rock outcrops (inselbergs) and somewhat disturbed sites at their base, like roadsides and clearings; from 300 to 600 m elevation. It also occasionally grows in epilithic vegetation patches lying on the flatter parts of inselbergs.

Flowering specimens were collected in January, April, May, August, September and December, suggesting that S. hydroides blooms year-round. Fruiting specimens have been found only in January.

Solanum hydroides is named for the resemblance of the long-stalked stellate trichomes of its calyces to the marine serpulid worm Hydroides Gunnerus, 1768 (illustrative images can be found at the Encyclopedia of Life; e.g. https://eol.org/search?utf8=%E2%9C%93&q=Hydroides).

Vulnerable (VU). EOO = 7,766 km2 (VU - vulnerable); AOO = 28 km2 (EN - endangered). Solanum hydroides is known from only three disjunct localities and is represented by only one collection in one of them (i.e. Serra do Toma Vento, Mun. Santa Teresa, Espírito Santo State). All other specimens were found in vegetation remnants associated with two inselbergs, located in the municipality of Nova Venécia, Espírito Santo state and in Minas Gerais State’s municipality of Teófilo Otoni. Both, however, are in the central Brazilian Atlantic Forest, where botanical knowledge gaps are known to exist ( Stehmann et al. 2009; Oliveira et al. 2016), suggesting the actual range of S. hydroides might be broader than currently known. Further sampling efforts in environmentally similar areas are therefore recommended, for a more accurate conservation status assessment. Nonetheless, the deforestation history of the area and the available geographic distribution data indicate that S. hydroides is of conservation concern.

The comparatively smaller leaves and thinner stems, petioles and inflorescence axis give a more delicate overall aspect of S. hydroides , differentiating it from all other species of the group, but S. sublentum . Solanum hydroides can, however, be readily distinguished from S. sublentum by the indumentum of stellate eglandular trichomes (Figs 1G-I View Figure 1 ) and by the widely obconic to cupuliform shape of the calyx at anthesis (Fig. 1C View Figure 1 ). In S. sublentum , the indumentum is of both conspicuous simple glandular trichomes and stellate eglandular trichomes (Fig. 3H View Figure 3 ), with the stellate trichomes usually much less numerous than the simple ones and often early deciduous (i.e. present only in new growth). Calyces of S. sublentum are somewhat urceolate, inflated and prominently plicate at the base of the calyx tube (Fig. 3D View Figure 3 ).

Although being a markedly less robust species (compare Figs 1A and B View Figure 1 with 3A), S. hydroides can be very similar to some specimens of S. hexandrum (a quite variable species), with which it shares the indumentum of four-rayed stellate eglandular trichomes (Figs 1H, I View Figure 1 and 3G View Figure 3 ) on the stems, leaves, inflorescence axis and calyces. Solanum hydroides differs from S. hexandrum in its white and smaller corollas (13-21.5 mm total length), shorter corolla lobes (5.9-8.8 mm long; Fig. 1D View Figure 1 ), and accrescent, but not inflated, fruiting calyces that only partially cover the mature fruit (Fig. 1E View Figure 1 ). Solanum hexandrum has corollas in various shades of lilac to purple and are larger (24.3-40 mm long), with longer corolla lobes (12.6-25 mm long; Fig. 3C View Figure 3 ) and the fruiting calyces are accrescent and inflated, completely enclosing the mature fruit (Fig. 3E View Figure 3 ). The corollas of S. hydroides are thin and membranous and easily tear apart between the lobes during the drying process, which can make the lobes on herbarium specimens seem longer than they really are. Hence, one should carefully check before measuring to ensure a correct measurement is taken from herbarium sheets.

Leaf measurements are also useful for distinguishing S. hydroides from S. hexandrum . The leaves of S. hydroides are generally smaller (7.5-13.6 cm long and 5-8.7 cm wide) than those of S. hexandrum (17-45 cm long and 10.5-32 cm wide). Nevertheless, like many species belonging to the Leptostemonum clade (sensu Bohs 2005; Stern et al. 2011), the leaves of S. hydroides are larger in plants growing in shade and in young individuals (see Roe 1966) and we have seen plants with leaves to 22 cm long and 11 cm wide. Specimens of S. hydroides , growing in shade, have a less dense indumentum, with less robust (i.e. stalks with fewer series of cells) and slightly shorter trichomes on stems, leaves and calyx. Corollas of these shade plants are usually larger in relation to the other flower parts (e.g. stamens and calyx).

The trichome morphology in S. hydroides is not particularly variable within individual plants and amongst plants of the same population; however, there is a significant variation in the number of trichome rays between some populations. Trichomes of specimens from the southernmost known population (in Santa Teresa municipality, Espirito Santo State) are mostly six- to eight-rayed and usually more densely distributed throughout the plant, while those of plants from the other populations ( Teófilo Otoni and Nova Venécia municipalities of Minas Gerais State) are mostly four-rayed (Figs 1H and I View Figure 1 ). Within individual plants, the variation in trichome morphology is limited to a reduction in the number of rays and is especially evident in plants with four-rayed trichomes. In these plants, the trichomes may lack one to almost all rays (Fig. 1G View Figure 1 ), sometimes with only the midpoint or a lateral ray remaining and the trichome appearing to be unbranched, but with a basal multiseriate stalk. This kind of variation has been reported in other Solanum groups, such as the Brevantherum clade or members of section Acanthophora Dunal ( Nee 1991; Levin et al. 2005; Stern et al. 2013).

The exploitation of natural resources in Brazil is far from being sustainable ( Ferreira et al. 2014) and this fact, combined with the rapid fragmentation of the Atlantic Forest ( Tabarelli et al. 2004), raises the risks for the vegetation refugia associated with inselbergs found in the domain. Particularly in some regions in south-eastern Brazil, these rock outcrops harbour the last remnants of forest fragments ( Martinelli 2007). Therefore, we argue that every remnant of native vegetation of rocky outcrops, no matter the size, is worth preserving and should be inspected. Remnants can harbour new species and endemics, like S. hydroides , despite the massive fragmentation and loss of the surrounding vegetation. 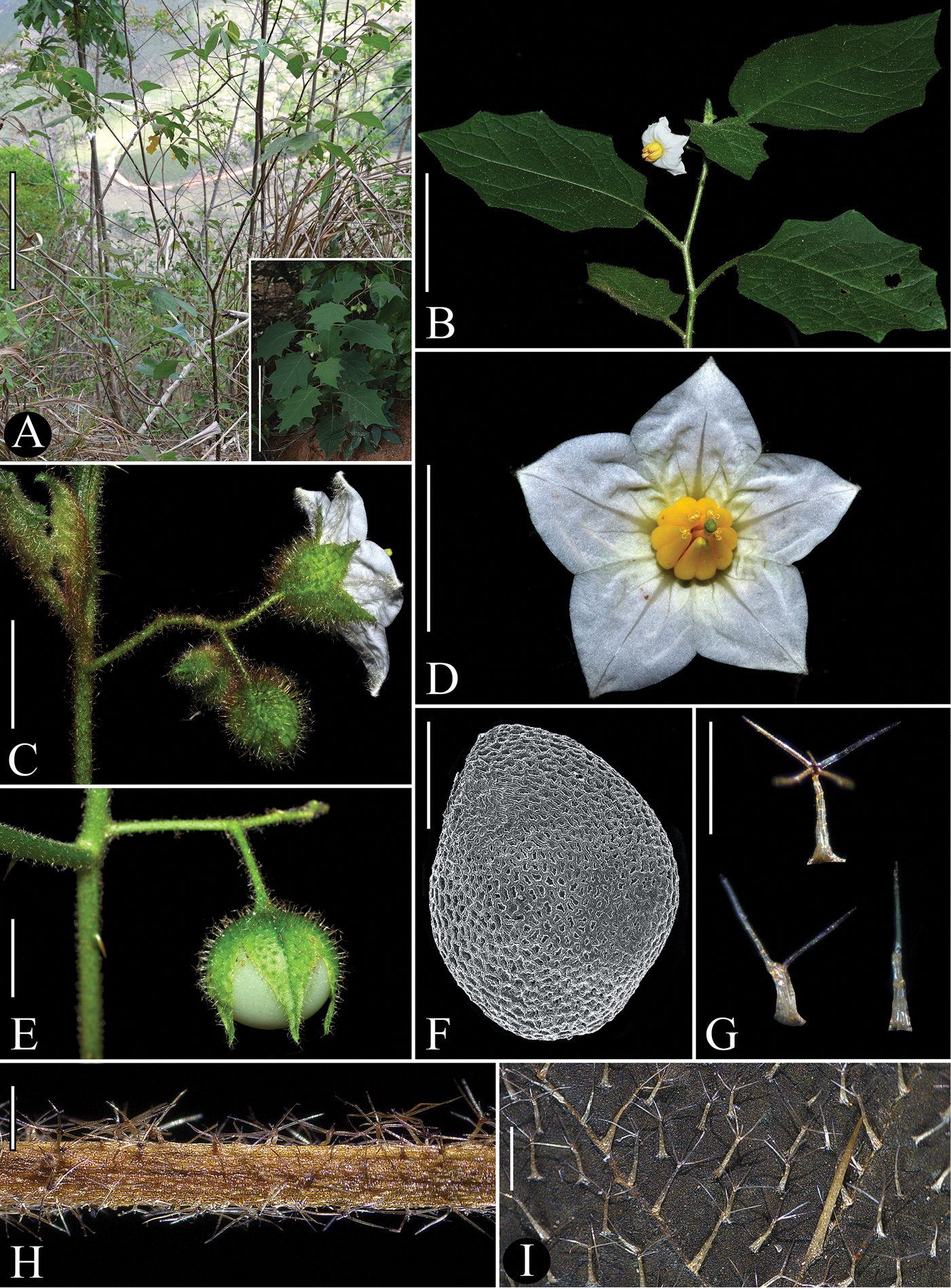 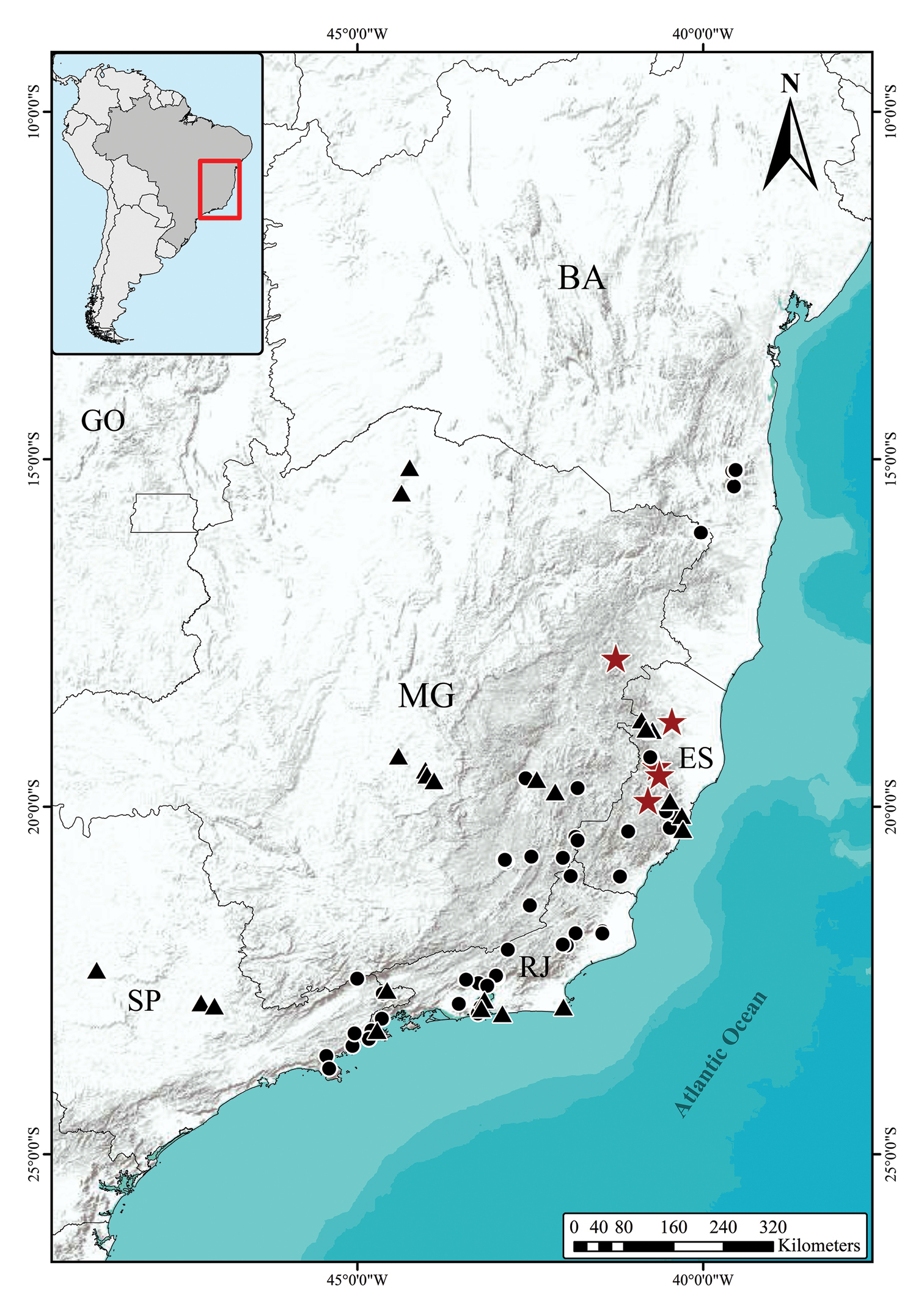 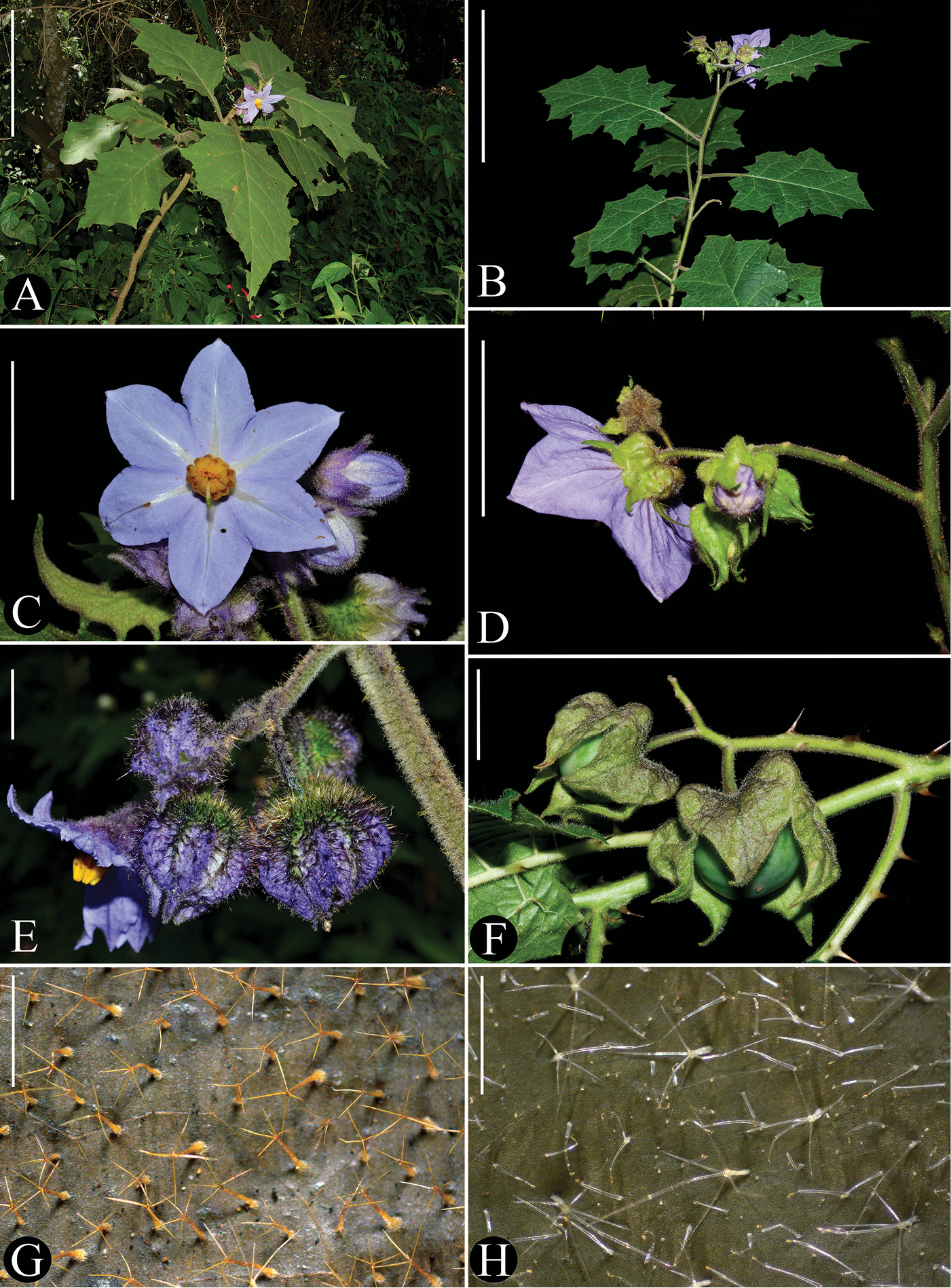