Remarks. Seven species of Ophiocoma   were found at Lifou ( Table 2). Of these, O. macroplaca ( H.L. Clark, 1915)   , O. doederleini   de Loriol, 1899 and O. schoenleinii Müller & Troschel, 1842   are new records for New Caledonia. Benavides-Serrato & O'Hara (2008) showed that O. schoenleinii   is a distinct species, separate from O. erinaceus   , with which it had been synonymized before ( Devaney 1970). Therefore, previous records of O. erinaceus   from New Caledonia may include specimens of O. schoenleinii   and the distribution of both species cannot be assessed. These dark brown to black coloured species are distinguished by O. erinaceus   having two tentacle scales and red tube feet (white in alcohol), whereas O. schoenleinii   has a single tentacle scale and grey tube feet (alive as well as in alcohol).

The differences in the dental plates shown by Benavides-Serrato & O'Hara (2008) are confirmed here at a smaller size of 15–16 mm dd. The internal surface of the dental plate in O. erinaceus   lacks the dorsalmost perforations at this size, which are already present in O. schoenleinii   . As additional character to separate these and a third dark species, O. cynthiae Benavides-Serrato & O'Hara, 2008   , the authors suggested the extent of granules covering the ventral disk. In O. erinaceus   , the granules are supposed to persist from the disk edge almost to the oral shields, in O. schoenleinii   only as a wedge near the disk margin and in O. cynthiae   they are absent (Benavides-Serrato & O’Hara 2008). In the Lifou material one specimen that clearly belongs to O. schoenleinii   , according to all other characters, has a fully granulated disk, another shows a wedge extending to the oral shield. Some specimens of O. erinaceus   on the other hand show a short wedge and specimens of 7 mm dd lack granules altogether, but in O. erinaceus   disk granules first appear at a size of 7.5 mm dd ( Devaney 1970). One of the syntypes of O. erinaceus   ( ZMB Ech 921) that I have examined in the Museum für Naturkunde in Berlin lacks granules on the ventral interradius. This character may therefore be less reliable and size-dependent. However, it cannot be ruled out that the syntype series includes both species, which would require selection of a lectotype to stabilize the concept of O. erinaceus   .

Several O. erinaceus   were preserved in what must be their night colour pattern; light brown to beige, radiating lines on a dark brown dorsal disk, similar to that shown for O. erinaceus   by O'Hara et al. (2004). Unfortunately, the collection notes do not record the time of preservation, but since collecting and preserving in the field went on until midnight it is highly likely that these animals were preserved at night. Hendler (1984) demonstrated colourchanges related to time of day in four species of Ophiocoma   , in some of which the presence of photoreceptors was shown later ( Aizenberg et al. 2001). Nothing is known about the presence of calcitic microlenses in O. erinaceus   .

Ophiocoma macroplaca   is distinguished from other species in the scolopendrina   -group of Ophiocoma   and most importantly from O. scolopendrina ( Lamarck, 1816)   by the presence of four spines on the third arm joint. In the Lifou specimens this character is rarely present on all arms in the same individual. As reviewed by Devaney (1970), this species has caused some taxonomic confusion, because the tiny holotype had few elongated granules or spinelets on the disk. In the Lifou specimens, the disk granules vary somewhat in size and shape. A specimen with 11 mm disk diameter has a dense covering of small round granules measuring about 100: 130 µm (width:height) intermingled with larger conical granules of 130: 170 µm, while a specimen of 6 mm disk diameter has mostly low round granules and few, scattered, about twice as large, conical granules. Other specimens have mostly low round granules, with larger conical ones restricted to the disk margin. The Lifou specimens of O. scolopendrina   have only low, round granules, about as high as wide, widely spaced. In addition, O. scolopendrina   is restricted to the littoral zone ( Devaney 1970) and has at Lifou only once been collected deeper than 5 m, whereas O. macroplaca   was not found shallower than 4 m and as deep as 150– 200m. One of the specimens of O. macroplaca   is almost white, presumably night colouration.

Ophiocoma pusilla   differs from other species of Ophiocoma   by its small size and hollow arm spines, a character also found in Ophiacanthidae   and in Ophiomastix ornata   . 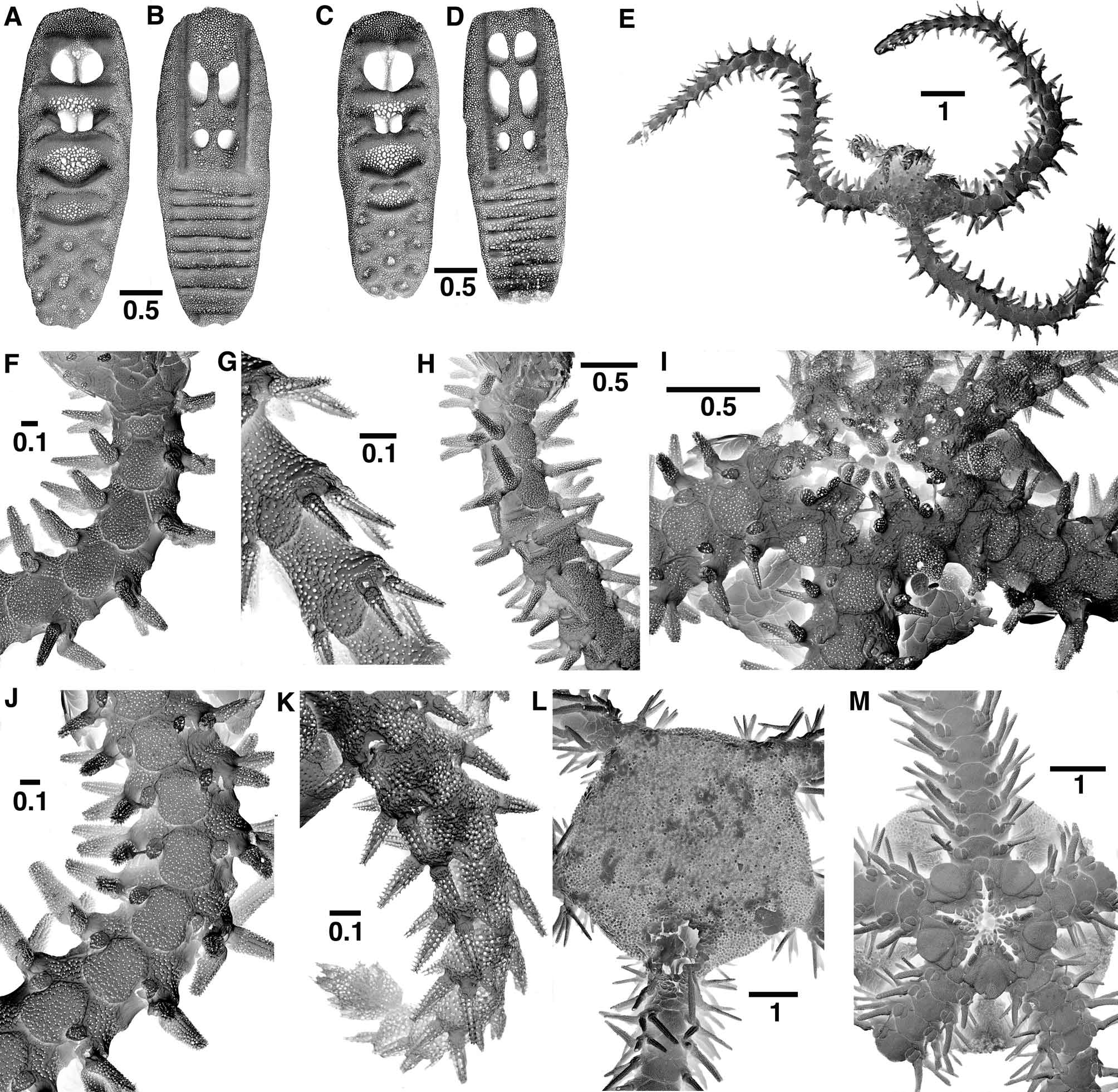