Etymology. The specific name is derived from the Latin words for different and spine, alluding to the different sizes of arm spines in the new species.

Holotype description. Disk rounded pentagonal, slightly indented interradially, 2.2 mm dd. Dorsal disk densely covered by granules, embedded in a thick layer of integument concealing all plates except the distal ends of the radial shields. Radial shields bar-like, separated for their entire length, about 1 / 3 of dd long. Arms noded, curled under disk. Dorsal arm plates fan-shaped, twice as wide as long, with convex distal edge, consecutive plates widely separated by lateral plates. On the second free arm joint the dorsalmost spines greatly enlarged, thicker and most likely considerably longer. Only one of these spines is still attached, pointing across the disk, its tip broken, and the remains of the base of another on another arm, but the large spine articulations on all arms indicate that this spine is not an aberration and that similar ones must have been present on all arms. Six spines proximally, including the enlarged dorsal spine, fewer spines distalwards. All other spines about same size, shorter than an arm segment, conically tapered, ventralmost spines minutely thorny, others smooth, perforated by vertical columns of holes. Spine articulation consisting of two ribs, one of them longer and slightly curved at one end, with nerve and muscle opening between them.

Remarks. Ophiochondrus   resembles Ophiolebes   in most characters and among the species currently included in Ophiolebes   , some may rather belong in Ophiochondrus   . The type species Ophiolebes scorteus Lyman, 1878   differs from Ophiochondrus   in the thick skin that covers dorsal and ventral disk, arms and spines, obscuring all plates ( Lyman 1878). Later, species lacking a thick skin (e.g. O. pachyphylax H.L. Clark 1915   , O. comatulinae McKnight, 2003   ) were included in Ophiolebes   , resulting in two badly delimited genera. The thick skin may not be a diagnostic character on generic level and both genera may need to be combined. Pending a revision of both genera, the new species is placed in Ophiochondrus   , because the thick skin is restricted to the dorsal disk. Among the species assigned to Ophiolebes   , the new species is most similar to O. sagamiensis Irimura, 1982   , which has elongated dorsal spines on the first two arm segments, but these are not enlarged in width. That species has spinelets on the skin-covered radial shields and a large madreporite, wheras O. variospinus   sp. nov. has only granules and an indistinguishable madreporite.

The familial placement of Ophiochondrus   has long been debated and Martynov (2010 b) proposed to place it in Ophiacanthidae   instead of Hemieuryalidae   on the basis of similarities in the shape of the arm spine articulation. All other characters also suggest ophiacanthid relationships and the granulated disk, bar-like radial shields, exposed only distally, and the long dorsal spine all point to Paterson's (1985) subfamily Ophiacanthinae  , although a subfamilial division may no longer be justifiable as Martynov (2010 b) showed. Ophiochondrus   is distinguished from Ophiomoeris   , also previously included in Hemieuryalidae   (see below), by its disk being covered with thick granulated skin, the shape of its radial shields and only weak interradial incisions ( Fell 1960). In addition to O. variospinus   sp. nov. the genus Ophiochondrus   comprises six species ( Stöhr & O’Hara 2007). The type species O. convolutus Lyman, 1869   has similar adoral and oral shields and mouth papillae, but it lacks a tentacle scale, although Lyman (1869) described a tooth-like scale that is actually one of the spines. Its up to seven arm spines (six in the original description) are half as long as an arm joint, about equal in length. Its disk is also covered by granulated skin and the arms are noded. In the syntypes of O. falklandicus   the dorsalmost of the four spines on the second and sometimes first arm joint is twice as long as all other spines, but it is more lateral in position and not as large as in the new species. The arms are not as strongly noded in this species.

According to Fell (1960), Ophiochondrus   lacks true tentacle scales, but that must be a misunderstanding since the syntypes of O. falklandicus   all possess a single small, oval tentacle scale on all pores along the arms. This scale appears to have been missed by Koehler (1923), who described the small ventral arm spine as tentacle scale, giving the number of spines as only three. The oral papillae are squarish and larger in O. falklandicus   (= O. stelliger   ) than in O. variospinus   sp. nov., but in all three examined species the number of oral papillae varies between three and four between different jaws in the same specimen. Ophiochondrus armatus ( Koehler, 1907)   has only few small, scattered granules on the dorsal disk, which do not obscure the disk scales; it has five arm spines of which the dorsalmost is elongated on proximal joints. Paterson (1985) questioned its placement in Ophiochondrus   due to similarities with Ophiolebes retecta ( Koehler, 1896)   , but the latter differs in the thick skin on jaws and ventral arms. Ophiochondrus granulatus Koehler, 1914   is with 7 mm dd a much larger species than O. variospinus   sp. nov., its disk bears large thorny granules in a thin skin that does not obscure the disk scales, and the up to five slender arm spines are longer than in the new species. Also in this species the dorsal spine is much longer than the other spines, but as in the above species with enlarged dorsal spines, previous authors missed the fact that the spine is elongated only on the most proximal joints. Ophiochondrus crassispinus Lyman, 1883   is distinguished by up to eight short arm spines, apparently none elongated, lack of a tentacle scale and exposed radial shields. Ophiochondrus gracilis Verrill, 1899   was described from a specimen that lacked the dorsal disk. It differs from the new species in the shape of its dorsal and ventral arm plates. Verrill (1899 b) noted up to eight short stout arm spines along most of the arm and slightly longer dorsal spines near the base of the arm. However, Clark (1941) reported a small specimen with intact disk, which is strongly lobed, interradially deeply incised, with large triangular radial shields separated by narrow plates, each of which bears a large thorny granule. He compared the specimen to Ophiocamax hystrix Lyman, 1878   and his description differs so markedly from the characteristics of Ophiochondrus   , particularly by the absence of granules, that its position in this genus is doubtful and should be investigated further.

O. variospinus   sp. nov. differs from all other species by its extremely large dorsal arm spines on the second free arm joint. The tendency to enlarge the dorsalmost spine on a few proximal joints appears to be a common trait in most species of Ophiochondrus   and may deserve further study. Enlarged dorsal spines on proximal segments are known also from other genera, for example in Ophiacantha dallasii Duncan, 1879   .

Distribution. Four of the previously known species of Ophiochondrus   are restricted to the Atlantic Ocean and one ( O. stelliger Lyman, 1879   ) is found in the Southern Ocean. The type locality of O. granulatus   is unknown and it appears not to have been reported since its description. The new species is thus the first record of the genus in the Pacific Ocean, but taking into account the confusion with Ophiolebes   , this may not hold true. 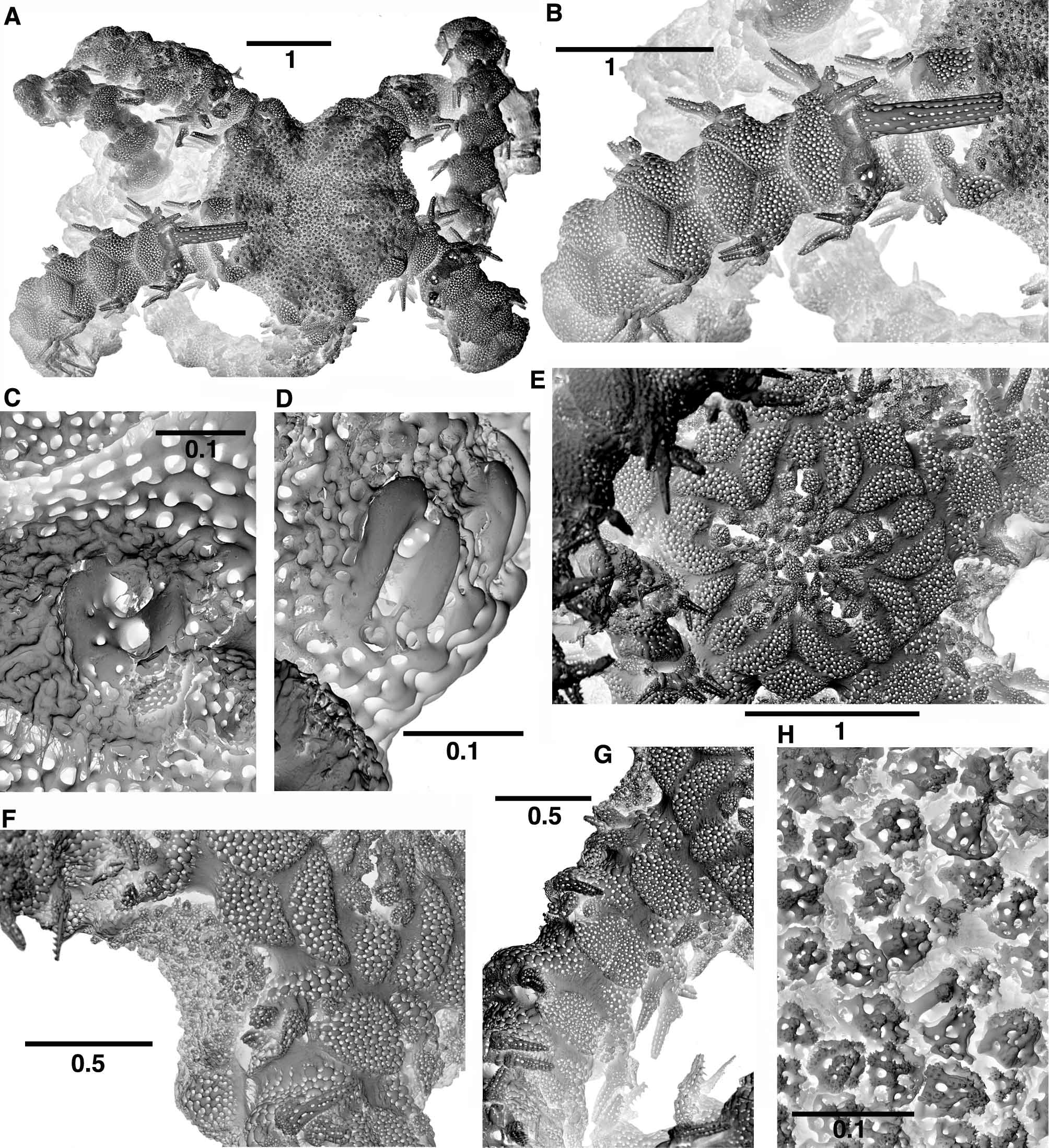