This species is named after Prof. Shouzhong Chen (= Shoutsung Chen; Institute of Hydrobiology, Chinese Academy of Sciences), who was the first among the Chinese ostracod workers to describe soft parts of non-marine ostracods from China ( Chen 1957).

The genus Pseudocandona Kaufmann, 1900, with 72 species described to date, is the third most diverse genus of the non-marine ostracods after Candona Baird, 1845 and Strandesia Stuhlmann, 1888 (see Meisch et al. 2019). [ Karanovic (2005, 2012) proposed an alternative taxonomic scheme where Typhlocypris Pseudocandona is treated as a subgenus under the genus Typhlocypris Vejdovský, 1882 and it only contains the six species of the Pseudocandona compressa group, but we follow Namiotko et al. (2014) who redefined the genus Typhlocypris .] The genus, as accepted at the moment, consists of five species groups (caribbeana, Pseudocandona compressa , prespica, rostrata, and zschokkei) and some species with uncertain positions ( Namiotko and Danielopol 2004; Meisch et al. 2019). This division is mostly based on the number of posterior setae on the second segment of Md palp. Species with 5+1+ β setae, as well as with the h1 -seta on the L7 being more than twice the length of terminal segment, are classified in the Pseudocandona compressa group ( Meisch 1996, 2000; Namiotko and Danielopol 2004), to which the present new species also belongs. Other species of this group are P. albicans (Brady, 1864), P. compressa (Koch, 1838), P. insculpta (G. W. Müller, 1900), P. pratensis (Hartwig, 1901), P. regisnikolai Karanovic & Petkovski, 1999, and P. sucki (Hartwig, 1901) ( Karanovic and Petkovski 1999; Meisch 2000; Karanovic 2012). Pseudocandona albicans can be distinguished from the present species by a shorter seta that accompanies the group of the five setae on the Md palp (sub-equally long to the grouped setae in the present species), a much slenderer first endopodal segment of the L6, as well as a slenderer carapace in dorsal view ( Meisch 2000). Male bristles on the A2 are absent in P. insculpta ( Meisch 2000), which easily distinguishes it from the present species. No other species of the Pseudocandona compressa group has the morphology of the male L5 and the Hp similar to P. cheni . In P. compressa , P. insculpta , and P. pratensis , the lob h is not distally inflated (albeit slightly curved in P. pratensis ), their right L5 have slenderer trunks. The lobe h in P. sucki is very wide, while the lobe b is small ( Meisch 2000). Pseudocandona regisnikolai is much larger (females range between 1.33 and 1.4 mm and males are up to 1.53 mm) ( Karanovic and Petkovski 1999). In addition, P. regisnikolai possesses only one dorsal seta on the basal segment of the A1, setae t2 and t3 on the male A2 are not transformed into bristles, the left prehensile palp of male is much slenderer than the right one, and the Hp bears a conspicuous lobe g ( Karanovic and Petkovski 1999). 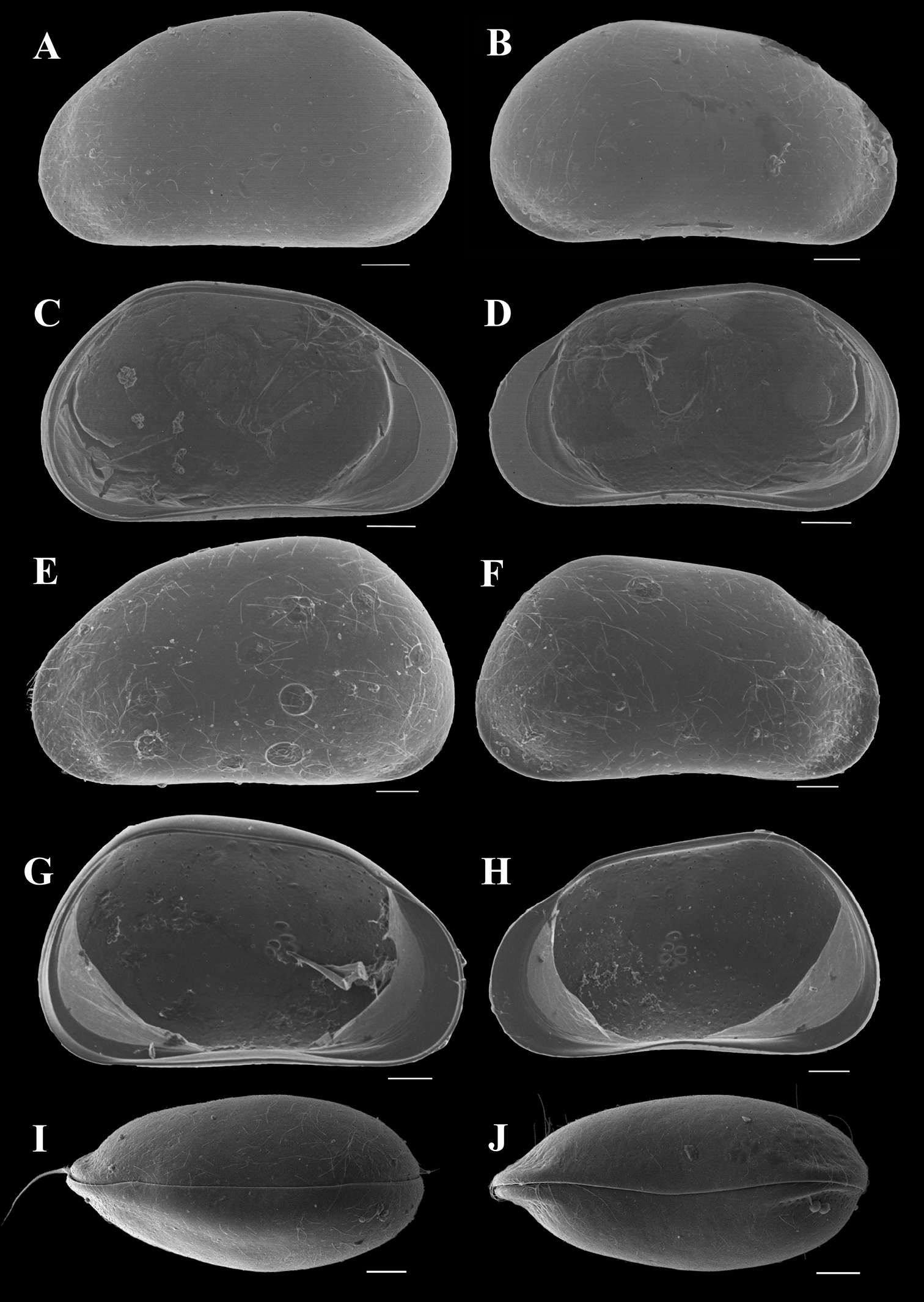 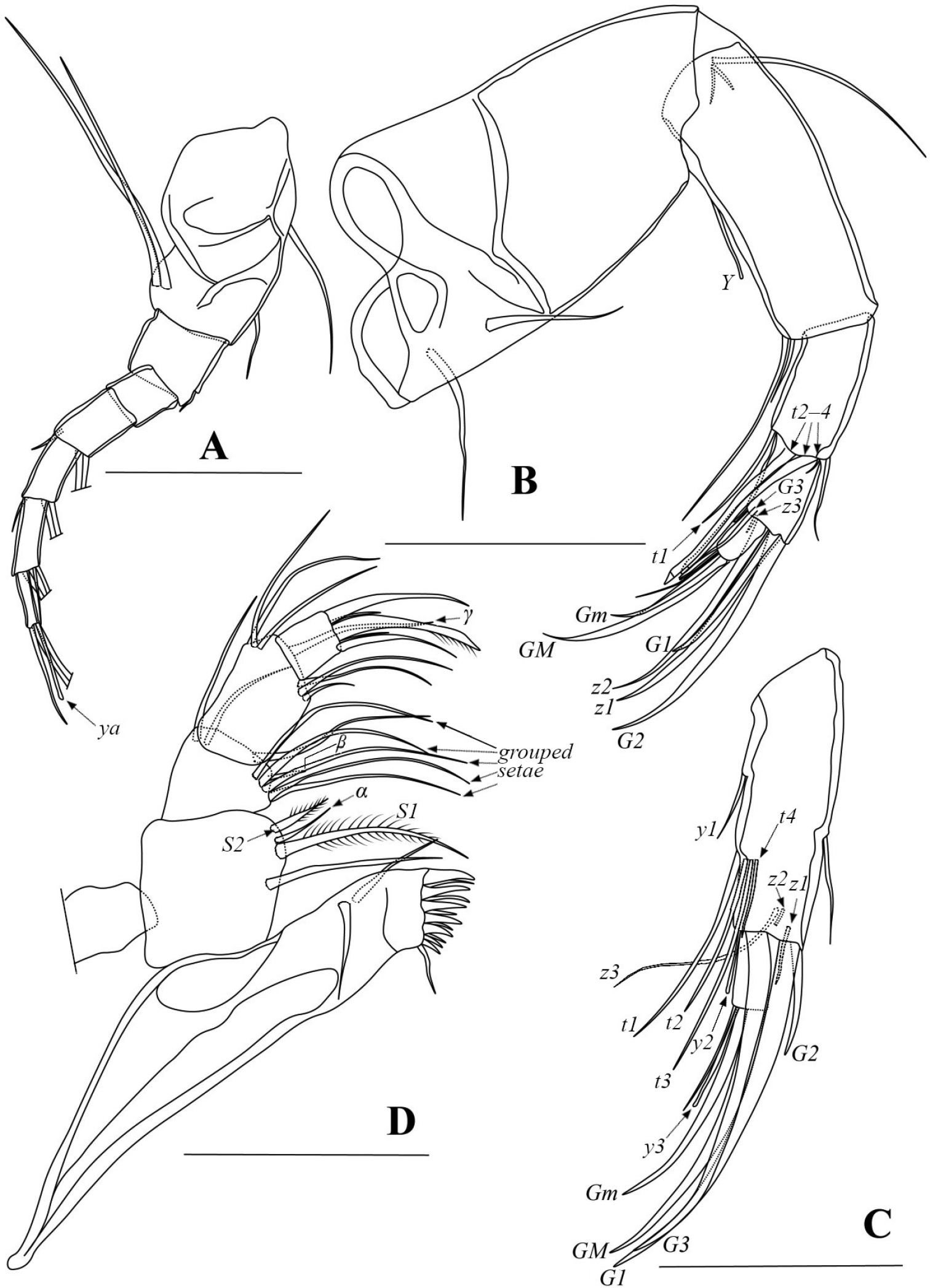 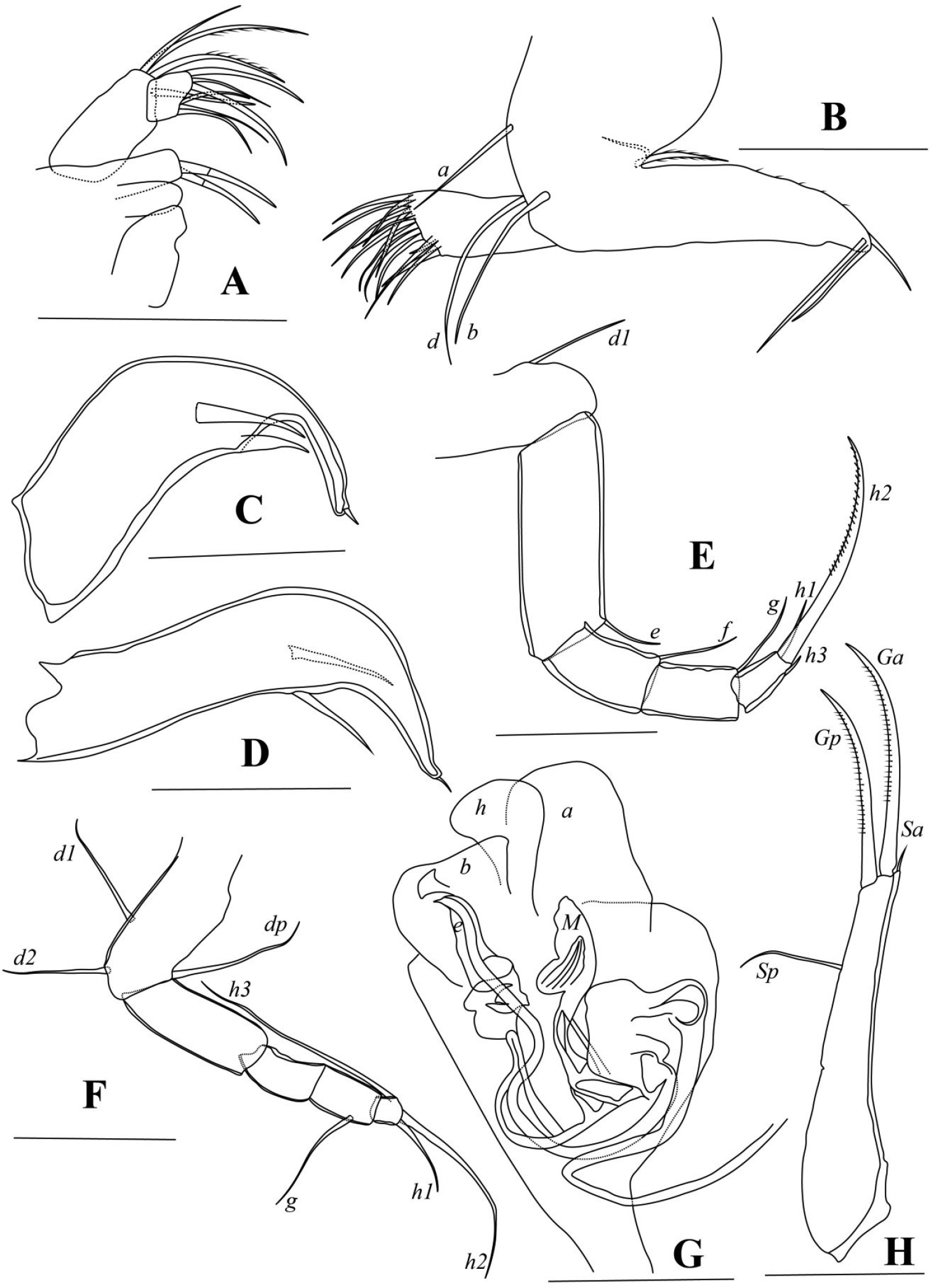