Diagnosis. Polyphylla starkae   is a member of the pubescens species group and unique with males having elytral setae clustered into groups, some in vague stripes ( Fig. 2, 4 View Figure 1-5 , 22 View Figure 22-29 ). This species is the largest member of the pubescens group and is strongly sexually dimorphic. Females are more robust than the males ( Fig. 3, 5 View Figure 1-5 , 23 View Figure 22-29 ) with legs modified for burrowing (compare Fig. 10, 14) and elytral setae nearly absent. Although flight wings appear fully developed, female elytra are tightly connected at the base along the suture, suggesting females are flightless.

Pronotal width = 1.7 x length; lateral margin rounded; surface glossy between widely scattered coarse punctures, punctures size 1.0-1.5 x those on clypeus, separated by less than 0.5 x their diameter near anterior and posterior angles, less dense on disc where variably separated by 1.0-4.0 x their diameter; each puncture bearing a seta, which vary from somewhat appressed to erect, lateral setae shorter than those on disc. Pronotal hypomeron with scattered coarse punctures bearing long erect setae, except for completely glabrous apical-lateral third near pronotal angle. Scutellum with laterally with coarse punctures and setae as on disc, smaller punctures nearly coalescing along midline.

Variation. Male. Length 21-25 mm; width 10-12 mm. Anterior clypeal margin on most is weakly sinuate in anterior view, is somewhat raised in the middle on a few. Lateral pronotal margin, evenly arcuate on most, is slightly angulate on a few. Patches of elytral setae vary in size in the specimens available. On some, their somewhat linear arrangement is clearer, but never prominent, on others it is imperceptible. The elytral pattern of radiating lines in reflected light is not visible in most specimens. Two specimens studied had patterning identical to the other members of this group. Body color also varied from light brown to dark brown, almost black.

Type Locality. Auburndale, Florida, USA ( Fig. 1 View Figure 1-5 ), which is geographically part of the Winter Haven Ridge. For conservation purposes, and until more populations are discovered, the exact coordinates are not provided here.

Etymology. Named for Donna Stark, who first collected this beetle, attempted to identify it, and brought it to our attention (see Palmer 2009). Survey efforts such as hers are greatly needed to discover and document our indigenous invertebrate fauna.

Common Names. Woodruff and Deyrup (1994) called “ P. pubescens   ” the “panhandle beach scarab.” Unfortunately, this name refers to the species later recognized and named P. woodruffi Skelley (2004)   . True P. pubescens   is not known to occur on beaches and is here named the “Eglin uplands scarab”. Given the immediate interest P. starkae   has raised among naturalists, conservation groups and other political entities in Florida, it is fitting to propose a common name for this new species. Thus, I am proposing P. starkae   be known as the “Auburndale scrub scarab.” 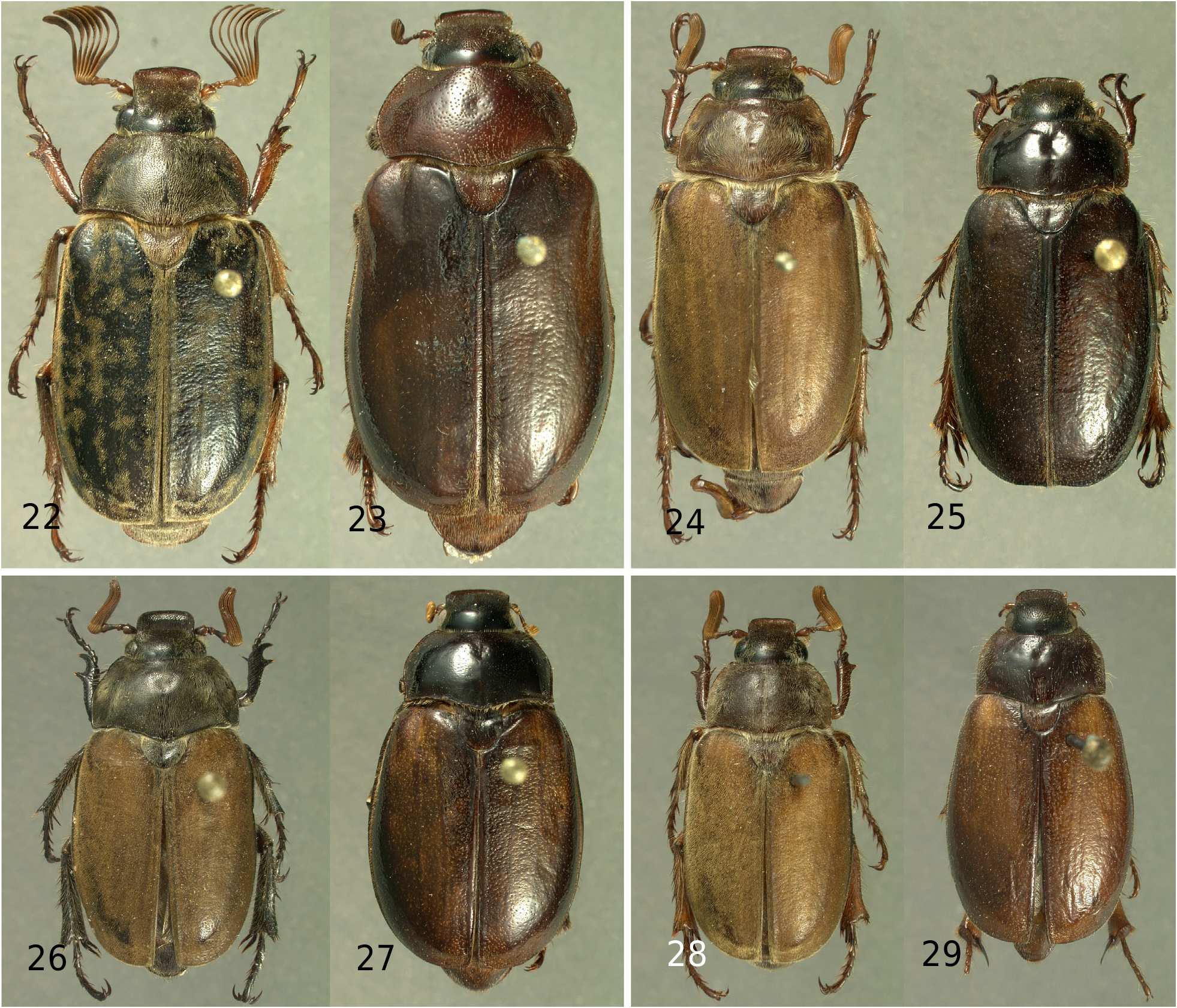