Etymology. Named for the continent from which the species was first collected.

Description. Colonies are roughly uniplanar to somewhat bushy, the latter condition amplified by the association with a commensal polychaete, which causes the coral to form an elongate, perforated tube up to 5 x 2 mm in diameter along its main stem. Colonies are relatively small, the largest (the holotype) only 4.8 cm in height and 3.5 cm wide, with a basal branch diameter of 4.1 mm. Branch tips are slender (about 1 mm in diameter) and pointed. The coenosteal texture is linear-imbricate, at least in the basal part of the colony and its thin basal encrustation. Higher on the colony this texture degenerates into a reticulate pattern, and the imbricate texture is covered with a smooth, dense, porcellaneous material ( Fig. 5 View FIGURE 5 C), which largely obscures the slits between the coenosteal strips. The corallum is uniformly white.

Gastropores are equally distributed on all branch surfaces, circular in shape, and 0.24–0.38 mm in diameter; there is no bordering lip. The gastrostyle is elongate (L:D up to 6), the illustrated gastrostyle ( Fig. 5 View FIGURE 5 I) 1 mm in length and 0.15 mm in diameter, the proximal portions stabilized by one or more horizontal tabulae ( Figs. 5 View FIGURE 5 I, L). The style bears longitudinal ridges that in turn bear a series of blunt spines up to 40 µm in length. A diffuse ring palisade of short (about 35 µm) mushroom-shaped elements occurs in the upper third of the gastropore tube, often visible from an apical view of the gastropore ( Fig. 5 View FIGURE 5 H) as is the gastrostyle tip, which sometimes extends even slightly above the coenosteal surface. The abcauline dactylopore spines are relative tall (up to 1 mm in height and 0.27–0.31 mm in width), the taller spines tubular proximally ( Fig. 5 View FIGURE 5 E), the shorter spines having a slender dactylotome for their entire length. The dactylopore spines are perpendicular to the branch when positioned low in the colony, but slanted distally in the upper part of the colony, their exterior surface bearing longitudinal granular ridges, and their distal edges are finely serrate ( Fig. 5 View FIGURE 5 D). Although many dactylopore spines occur individually, they also form crescents of 3–6 laterally placed spines below gastropores on distal branches. On the inner surfaces of the dactylopore spines, below the level of the coenosteal surface, are three rows of rudimentary dactylostyle elements (a central and two lateral dactylostyles, Fig. 5 View FIGURE 5 G), these elements up to 60 µm in height in the central row, and only about 30 µm in the lateral rows. These elements are difficult to see in an intact dactylopore spine, and must be viewed with high magnification (or SEM) in a broken structure.

Comparisons. Inferiolabiata africana   is similar to I. lowei   in many aspects, especially coenosteal texture, dactylopore spine shape, ring palisade structure, and rudimentary dactylostyle structure, but differs consistently in several characters. It has a more delicate and finer colony shape (e.g., more slender branches), and consistently has a polychaete commensal; its gastropore tubes are slightly smaller, its gastrostyles slightly larger, and it does bear a ring palisade, which does not achieve the commodious aspect seen within the gastropore tubes of I. lowei   ; it often has its dactylopore spines arranged in abcauline crescents, and the spines are often cylindrical proximally, whereas those of I. lowei   are rarely arranged in crescents and are rarely cylindrical. Finally, it has smaller female ampullae. 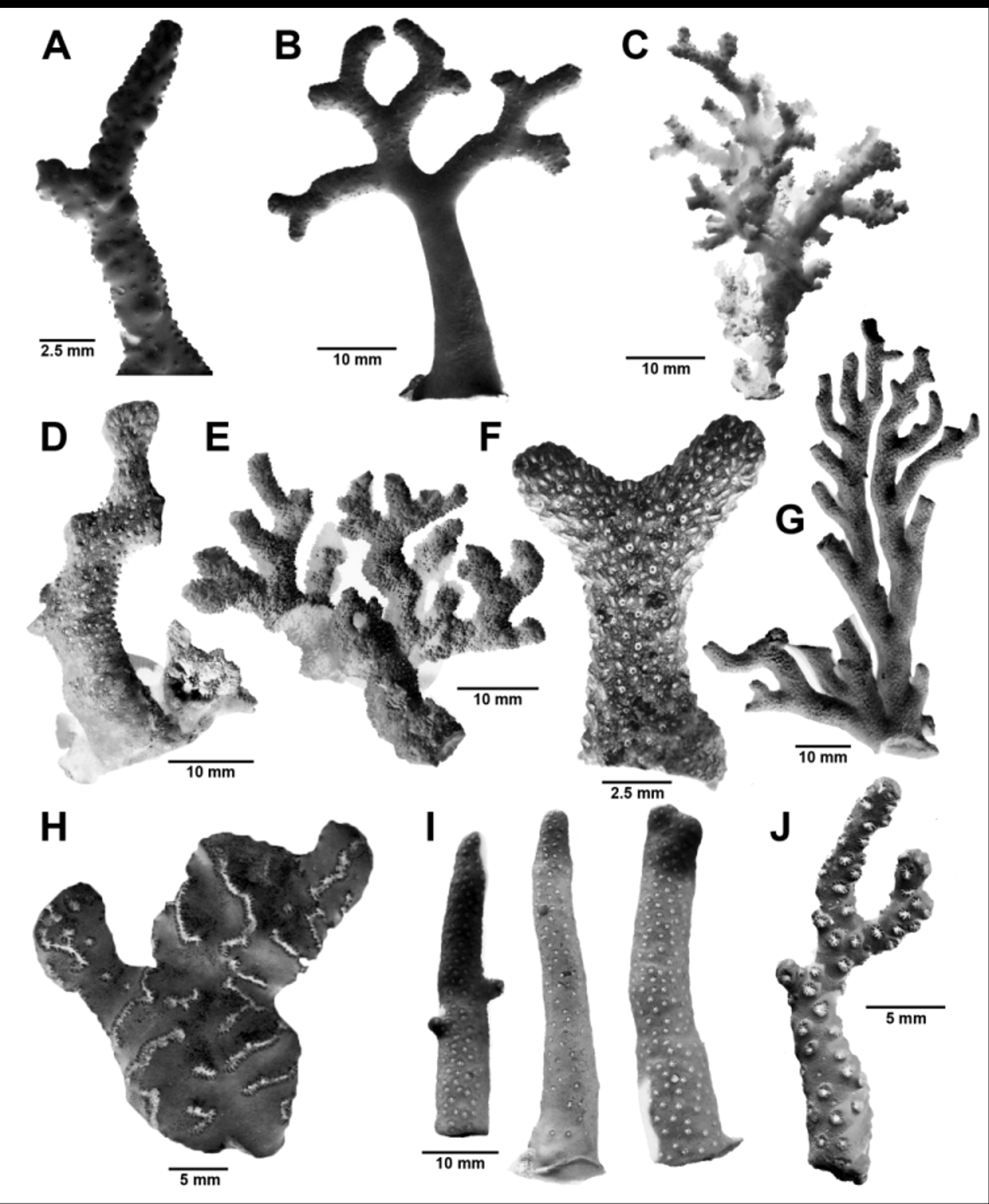 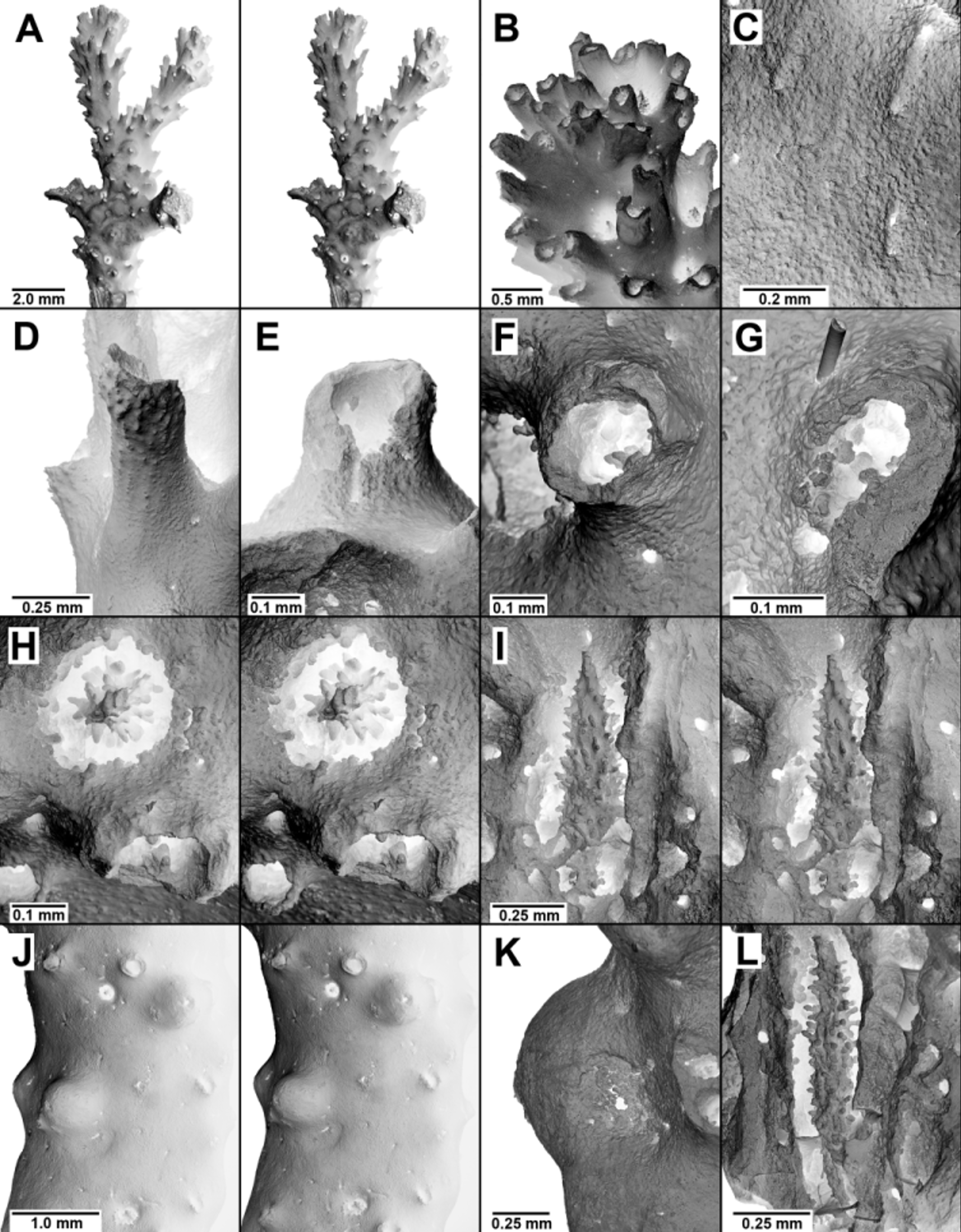