The song patterns of the species of P. inflatus   group differ significantly and group specific characters are not obvious. However, the species can be separated into four groups ( Figure 14 View FIGURE 14 ). The amplitude modulations of P. inflatus   and P. isopterus   (song type A) as well as that of P. cretensis   and P. martinae   (song type B) are each quite similar, the subspecies of the P. antalyaensis   show the same basic structure (song type C) and P. bilgeri   (song type D) differs from all other members of the group. According to our observations the species are acoustically active at least from morning to the (late) evening.

Amplitude modulation. The calling song of P. inflatus   (song type A; Figure 15A, B View FIGURE 15 ) was described by Heller (2004). The recordings from many additional specimens and localities analysed here confirm these data. “ The male calling song consists of long syllable sequences of indefinite duration, lasting many seconds or minutes. Within the sequence, two types of isolated syllables change more or less regularly. One type is represented by longer, two-part syllables (l-syllables), the other by shorter, undivided syllables (s-syllables) ” ( Figure 15A, B View FIGURE 15 ). Often long series of l-syllables are followed by a few s-syllables, then another series of l-syllables follows and so on. However, there are also recordings which are less regular. The intervals between the syllables range typically from 0.6–3 s. The basis for the different syllable structure can be found in the stridulatory movements ( Figure 15A, B View FIGURE 15 ). “ The ssyllables (duration about 12–25 ms) are produced by a more or less continuous closing movement of the tegmina. In the l-syllables (duration about 30 ms) the amplitude of the movement is smaller. More important is, however, that the speed of the movement changes during closing. It becomes much slower after the first half, resulting in a short silent interval before the loud final part. Since the stridulatory file consists of regularly spaced teeth, the differences in movement speed must be based on neuromuscular activity “ ( Heller 2004). Interestingly, when producing s-syllables the male shakes distinctly as a consequence of the abrupt movement. There are no obvious differences between P. isopterus   and P. inflatus   in the calling song.

The male calling song of P. martinae   (song type B) consists, similarly in P. inflatus   , of long syllable sequences of indefinite duration (detailed description in Heller 2004). Within the sequence, also two types of sound elements change more or less regularly. One type is represented by longer, multi-part syllables or possibly syllable groups (see below P. cretensis   ; called l-syllables) and the other by shorter, two to three-part syllables (s-syllables). Rarely also undivided syllables are observed. As in P. inflatus   , a long series of l- is followed by a few s-syllables. However, in contrast to P. inflatus   , the l-syllables are produced quite rapidly at a syllable repetition rate of 6–8 Hz (at 25–26°C; Figure 16A View FIGURE 16 ). The intervals between the s-syllables are with 3 to 8 s larger than in P. inflatus   . In the basic time pattern the calling song of P. cretensis   is quite similar to that of P. martinae   . In P. cretensis   single syllables ( Figure 16B View FIGURE 16 ) or single echemes, containing one macro- and typically two microsyllables, alternate with fast echeme sequences ( Figure 14D View FIGURE 14 , 16D View FIGURE 16 ). Within the microsyllables opening and closing hemisyllables are clearly visible, quite unusual for Poecilimon   species. The alternation of the sound elements can be regular, but often long series of one element type (single echemes or series) can also be observed.

The amplitude modulation of the male calling song of P. antalyaensis   (song type C; Figure 14E–G View FIGURE 14 ) showed the same basic pattern in all three subspecies of P. anatalyaensis   . One loud syllable is followed by one to six softer ones ( Figure 14E–G View FIGURE 14 ). This unit is repeated at variable intervals, from a few to many seconds (see below). However, analysing the songs in detail, clear differences between the three forms can be recognised ( Figures 17 View FIGURE 17 , 18 View FIGURE 18 ). The duration of the first loud syllable was quite constant in P. a. antalyaensis   , but varied by about a factor of 10 between this subspecies and P. a. myrae   with P. a. anemurium   situated in between ( Figure 18 View FIGURE 18 ). The variation in P. a. anemurium   is not based on genetics; one animal with short syllables is offspring of that with long ones. Also effects of temperature are unlikely to have a strong effect; range 22.8–25°C for short and 21–22.5°C for long syllables. The interval between first and second syllable was quite variable in the species, ranging from 300 to 700 ms in P. a. antalyaensis   , and it is similar in the other subspecies concluded from the limited data ( Figure 18 View FIGURE 18 ). Another difference between the subspecies may be found in the number of soft syllables. In P. a. anatalyensis 3.9 soft syllables per song unit (range 2.0–5.0; n= 14 males; n measurements see Methods) were observed, in P. a. anemurium   2.3 (range 1.5–3.5; n= 4 males) and in P. a. myrae   always only one (n= 1 male). In two long laboratory recordings (42 min, 62 min) of P. a. anemurium   it could be recognized that this animal produced spontaneously several times series (duration 1–2 min) of song units with short intervals (ca. 4 s) between while during the remaining time the intervals were mostly much larger (often> 1 min).

In contrast to the other species of the group, P. bilgeri   produces songs consisting mainly of only one syllable type, but these syllables have different amplitude and are combined to echemes (song type D; Figure 19 View FIGURE 19 ). The core element of the echeme starts with 4–5 syllables increasing in amplitude, followed by an interval of about 60 ms, and is finished by a single syllable. This unit is often followed by soft syllables which are produced by irregular stridulatory movements. The last syllable of the short series has a duration of 8.6 ms, is presented with a syllable repetition rate of 47 Hz, and the central interval lasts 64 ms (n=10; 2 males; T>25°C).

Duets and female latency times. In all species of the group (except P. isopterus   ; not tested) the females responded to the male song with own acoustical signals. However, for most species only limited data are available which allow only a preliminary description of this behaviour. In P. inflatus   the single female recorded responded to s- and l-syllables. As found in other Poecilimon   species ( Heller & Helversen 1986), the response delay was very short, in the range of 25–30 ms at 24.5°C ( Figure 20 View FIGURE 20 ; Heller 2004). A careful analysis showed that the female produced mostly a single click-like sound about 483 ms (range 237–767 ms; n=10) before it responded to the male syllable. Its acoustical response consisted of a series of impulses, about 187 ms (range 113–289 ms; n=12) long.

In P. martinae   the two females recorded responded preferentially to s-syllables. They replied to isolated ssyllables as well as to the s-syllables at the beginning of the l-syllable series. In addition they also responded sometimes during an l-syllable series, but rarely. The response delay of 50–90 ms ( Figure 20B View FIGURE 20 ; 62 ± 9 ms, n = 39; T = 25 °C) was short, but nearly a factor twice larger than in P. inflatus   . The response was shorter than in P. inflatus   (ca. 20–50 ms). The P. cretensis   female was recorded responding to three different males. It answered after isolated syllables, after the first syllable of isolated echemes ( Figure 20C View FIGURE 20 ) and sometimes also at the beginning of (or during) an echeme sequence ( Figure 20D View FIGURE 20 ; latency 43.2 ms, response duration 30.4 ms; n=10; T=20°C). Mostly the first (1–2) impulses were quite loud, the others soft to very soft. Rarely spontaneous responses were observed without relation to the male song pattern.

In P. a. antalyaensis   the responses of two females were recorded. Both answered very regularly after the soft syllables in the male song ( Figure 17D–F View FIGURE 17 ). In detail, however, the two specimens differed; latency of the female response 24.8 ms at T>22°C vs. 42.9 ms at T=19°C (n=10 each); duration of the female response 63 ms (consisting of two parts with large gap between, first part louder than second) at T>22°C vs. 14 ms (one part) at T=19°C (n=10 each). The response was produced mainly during the initial opening of the tegmina (and soft impulses during closing) ( Figure 20E View FIGURE 20 ). Sometimes spontaneous responses were observed, but they occurred always at about that time the male produced its soft syllables. They were found before the male had started its series as well as after it ( Figure 17E, F View FIGURE 17 ).

Spectral composition. The carrier frequencies of the male songs have their maximum in the high audio and low ultrasonic range ( Figure 21 View FIGURE 21 ). Comparing the species there is a clear negative correlation with body size; the smaller the species, the higher the peak frequency ( Figure 22 View FIGURE 22 ). Only Poecilimon inflatus   does not fit the trend very well. Its peak frequency is unusually low, as already noted by Heller (2004) and now confirmed by additional recordings ( Figure 21 View FIGURE 21 , spectra from three males from three different populations not studied in 2004; one P. i. inflatus   , two P. i. lyciae   ). In 2004 five males were analysed up to at least 40 kHz (for an example see Figure 34 in Heller 2004). P. isopterus   has an unusually short pronotum and legs so its peak frequency is unexpectedly high for its overall relatively large body size. 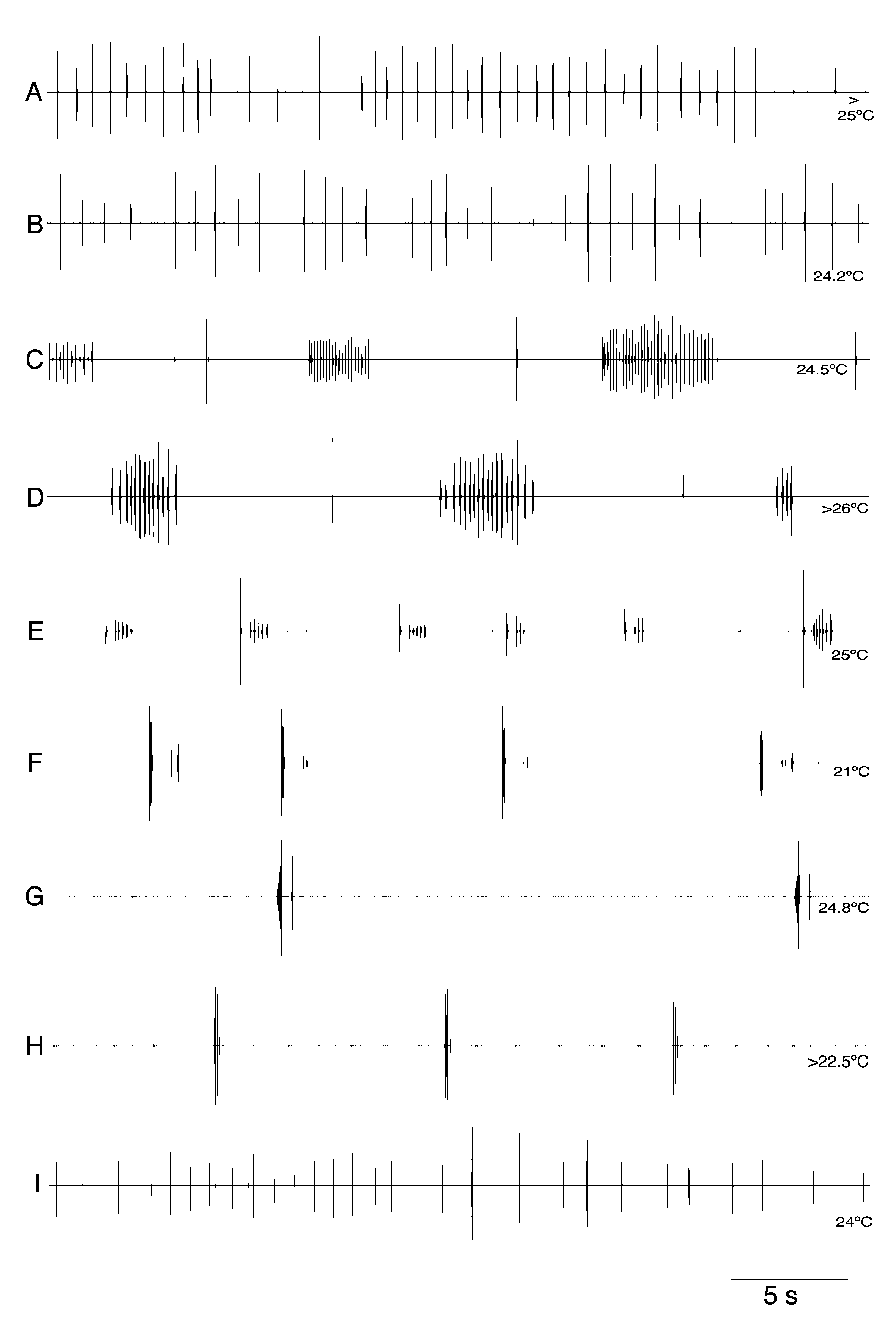 FIGURE 21. Power spectra of the calling songs of the species and subspecies of the Poecilimon inflatus group.

FIGURE 22. Relationship of body size and middle peak frequency (given as mean of carrier frequencies at -10 dB below and above peak frequency) in the P. inflatus group. A- Peak frequency versus pronotum length, B- Peak frequency versus length of hind femur. Filled symbols mark data from identified individuals, for open symbols means of sizes were used. The black dots indicate the combinations known from other Poecilimon species (from Heller et al. 2006). X marks P. tschorochensis with huge inflated tegmina.