Mocyta scopula   can be distinguished from bicolored Canadian species and paler specimens of M. fungi   by its finely punctate pronotum that is almost as wide as the elytra and ca. as long, and the distinctly transverse antennomeres 6-10 (Fig. 30A View Figure 30 ). The barcode sequences of M. scopula   forms a sister cluster with M. luteola   (BOLD:ABW2813), with a sequence divergence of ~ 7.5%. These species can be easily separated using the above diagnosis.

The Canadian specimen was collected from forest litter with a Berlese funnel but nothing specific is known about this species’ microhabitat preferences.

Mocyta scopula   is a native Nearctic species distributed in eastern North America. Here we newly report it from Canada based on one male specimen collected in southern Ontario. Its distribution in the United States is based on type material, including its putative synonyms, which should be verified.

Mocyta scopula   is the type species of Dolosota   Casey, which has been treated as a subgenus of Acrotona   since Seevers (1978). However, using the generic concepts of Klimaszewski et al. (2015), this species best fits in genus Mocyta   based on the following character states: dorsal surface without fine white pubescence; broad tergite VIII with basal line not touching base of tergite; spermatheca with pear-shaped capsule and distinct but small invagination, and thin and irregularly shaped stem ending in a tightly deflexed apex (Fig. 30F View Figure 30 ) (based on images taken of female syntypes ( NMNH). Further evidence comes from barcode sequences of this species, which cluster with the other species of Mocyta   . Therefore, we synonymize Dolosota   Casey syn. nov. with Mocyta   Mulsant and Rey. The other species included in Dolosota   by Seevers (1978) were treated as synonyms of M. scopula   by Majka and Sikes (2009), in addition to two other Casey names (see above synonymy), following the unpublished results of a type revision by V. Gusarov ( Gusarov 2003b). These synonyms and M. scopula   are here comb. nov. in Mocyta   .

The aedeagus, coloration and punctation of the Canadian specimen are consistent with type material of M. scopula   , previously examined and imaged by JK. The two other members of the BIN BOLD:ACH8720 originate from a study by Elven et al. (2010), and were mined into BOLD from GenBank. They were collected in the USA and identified verbatim as Mocyta scopula   by V. Gusarov. 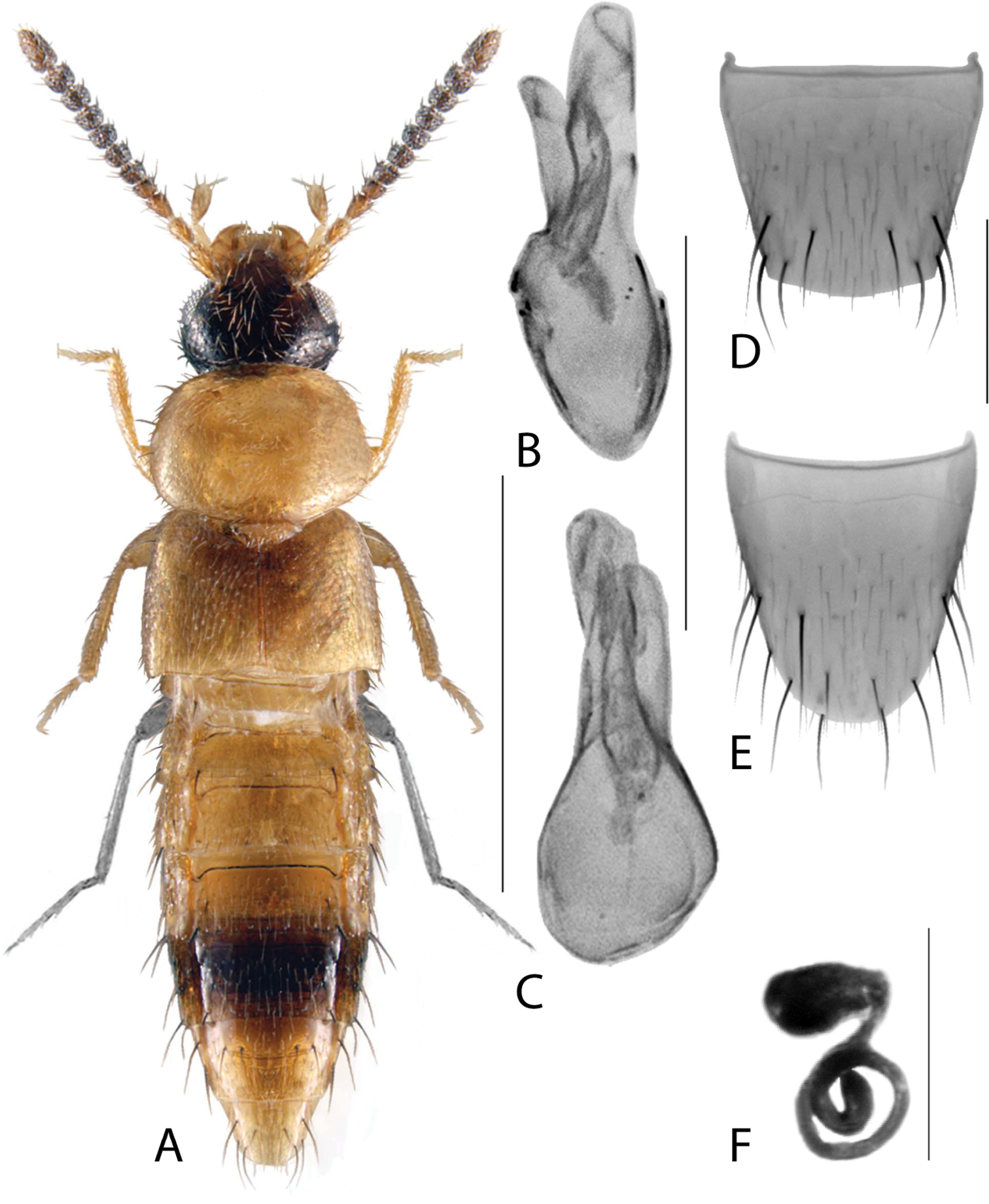