Remarks. Hydroids of the genus Clytia Lamouroux, 1812  , as currently defined, are distinctive in overall colony form. However, identification of the various species is frequently a challenge. Given a preponderance of perfunctory original descriptions, a limited number of taxonomically useful morphological characters, and the likelihood of considerable intraspecific morphological variability, uncertainty and confusion exist about the identity and scope of several species. In view of the difficulties encountered by traditional taxonomists in dealing with this group, more molecular analyses are required to resolve the diversity, identities and relationships of clytiid species. Indeed, Clytia  as presently constituted appears to be polyphyletic given the ambiguous placement of C. hummelincki (Leloup, 1935)  and C. paulensis ( Vanhöffen, 1910)  in phylograms of Proboscoida Broch, 1909 [1910] ( Cunha et al. 2017). Significant contributions to knowledge of C. hemisphaerica ( Linnaeus, 1767)  , C. gracilis (M. Sars, 1850)  , C. noliformis ( McCrady, 1859)  , and C. elsaeoswaldae Stechow, 1914  , all of which occur along the east coast of the United States, have recently been made in papers such as those of Lindner and Migotto (2001, 2002), Lindner et al. (2011), and Cunha et al. (2017).

Hydroids of C. elsaeoswaldae  are much like those of the boreal C. gracilis  in morphology, and the two were considered conspecific for much of the 20 th century. In some works (e.g., Cornelius 1982), both were included in the synonymy of C. hemisphaerica  , but recent molecular studies reveal that the three are distinct genetically ( Lindner et al. 2011; Cunha et al. 2017). According to Lindner et al., characters distinguishing C. elsaeoswaldae  from C. gracilis  include: (1) colonies are stolonal or mostly so rather than being branched, and (2) gonothecae arise from the hydrorhiza rather than from the branches. Morphological differences said to exist between C. elsaeoswaldae  and C. hemisphaerica  are summarized under the latter species below. Meanwhile, phylogenetic analyses by Lindner et al. and Cunha et al. indicate that the C. gracilis  morphotype comprises several cryptic species.

Establishing the identities of several morphologically similar species of Clytia  reported in 19 th and 20 th century literature of the Americas remains nearly unfathomable. Particular difficulties were encountered during this study in sorting out records that apply to C. elsaeoswaldae  and C. hemisphaerica  , both of which are reported here, and those that were based on specimens of the cool-temperate C. gracilis  . Records in the Reported Distribution section below have been based for the most part on current ideas concerning synonymies of species, with consideration given also to probable biogeographic affinities of the species. Reports most likely to be sound are those in which gonothecae of specimens were described and illustrated. While most accounts of the cool-temperate C. gracilis  (also reported as C. cylindrica  and Gonothyraea gracilis  ) from the tropical and warm-temperate western North Atlantic are likely based on the warm water C. elsaeoswaldae  , those from pelagic Sargassum  are here included under C. hemisphaerica  unless gonothecae with smooth walls were described. The latter species is frequent on gulfweed in the western North Atlantic ( Rackley 1974; Calder 1995) while C. elsaeoswaldae  is much less so. Records of C. gracilis  to the north of Cape Hatteras are taken to have been correctly assigned to that species (or that species complex), and have been excluded from the list below on C. elsaeoswaldae  . A few records of C. coronata Clark, 1879  from the warm western Atlantic have been included under C. hemisphaerica  , following synonymy adopted in earlier work (Calder 1990 [1991a]: 60). However, Fraser’s (1912b, 1944, 1946 [ 1947 a]) concept of C. coronata  more closely corresponds with that of C. elsaeoswaldae  , especially in having gonothecae with smooth walls. His records of C. coronata  , and those of several North American authors (e.g., Deevey 1950; Fincher 1955; Defenbaugh & Hopkins 1973) following him, remain highly uncertain. As records are interpreted here, C. elsaeoswaldae  is believed to have a range in coastal waters from North Carolina to the southern Caribbean Sea, including Bermuda and the Gulf of Mexico, and southwards to Brazil in the western South Atlantic ( Lindner et al. 2011).

The name of this species was originally founded by Stechow (1914) as Clytia elsae-oswaldae  . Following the code (ICZN Art. 32.5.2.3), the specific name has been corrected in earlier work ( Vervoort 1968: 15) to elsaeoswaldae  . As noted below under C. hemisphaerica  , Thaumantias elsaeoswaldae Stechow, 1914  was described as a different species, although it too is now assigned to Clytia  . Of the two homonymous names, C. elsaeoswaldae Stechow, 1914  and C. elsaeoswaldae ( Stechow, 1914)  , precedence was assigned to the former under the Principle of the First Reviser (ICZN Art. 24.2) because gonothecae were present in its type material, and the species has been recognized as valid a number of times (Calder 1990 [1991a]).

The medusa stage of C. elsaeoswaldae  has been described in life cycle studies by Lindner & Migotto (2011). 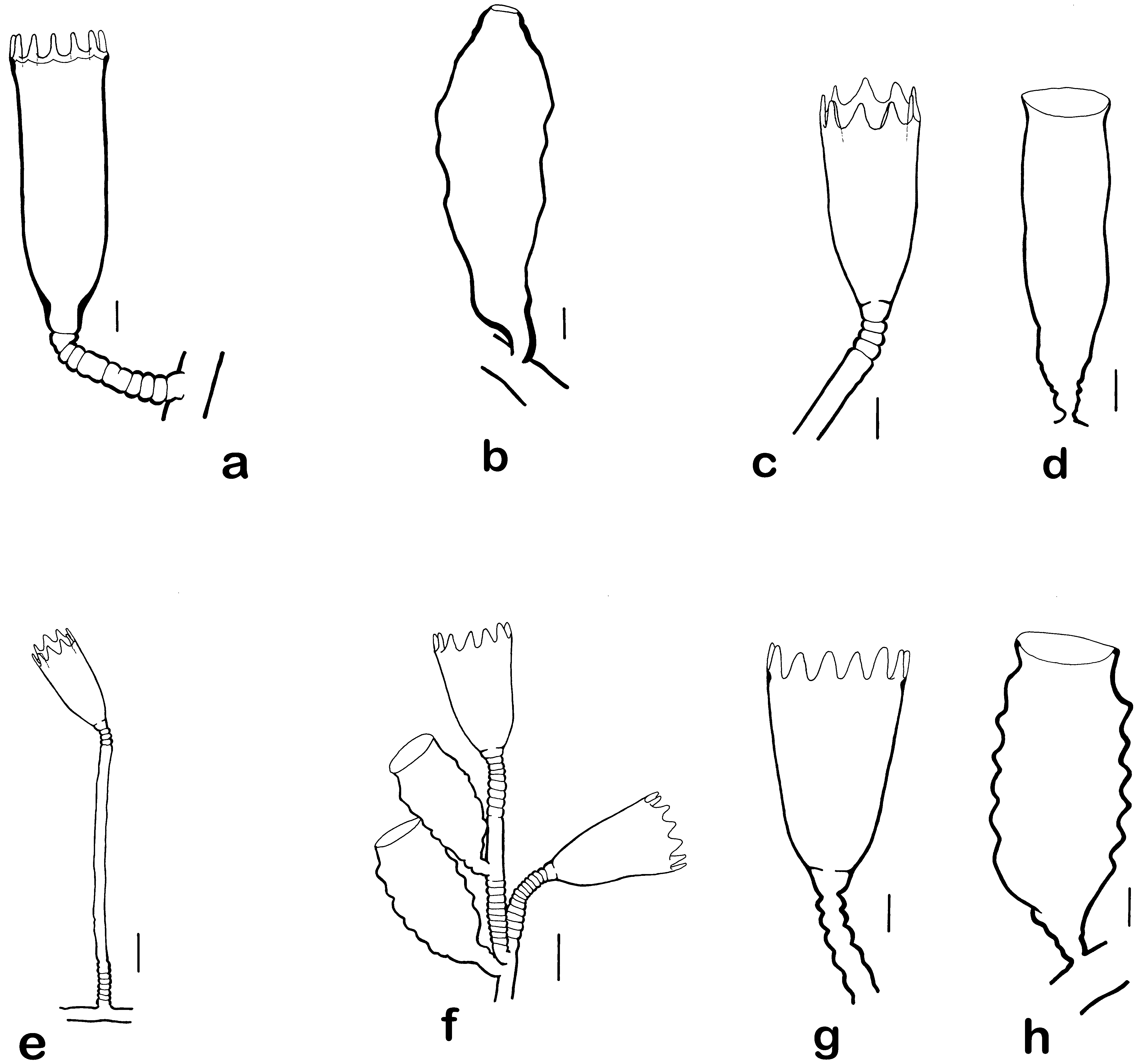