Description of holotype. Hydroid colonies minute, stolonal, arising from a reptant hydrorhiza adhering to blades of the seagrass Thalassia testudinum  . Stolons of hydrorhiza smooth, tubular, 70–100 μm in diameter, mostly simple, little branched, not anastomosing, with moderately slender perisarc; internal septa absent. Hydranth pedicels erect, mostly straight, unbranched, arising at relatively close intervals, short to moderately short in length, 0.2–2.7 mm high, 58–90 μm in diameter, each supporting a hydrotheca at distal end, annulated proximally, smooth medi- ally, then annulated again distally below base of hydrotheca, occasionally with one or more nodes or with a few annulations medially as well, infrequently annulated throughout; annulations somewhat compressed, their numbers at both proximal and distal ends varied; subhydrothecal spherule absent; pedicel perisarc of moderate thickness. Hydrothecae deep, slender, circular in cross-section, 630–880 μm high, 215–295 μm in diameter at rim, 80–115 μm in diameter at diaphragm, tapering only slightly from distal to proximal end and appearing nearly cylindrical, becoming constricted at base; hydrothecal walls smooth, perisarc fairly thin, out-turned a little and appearing thickened somewhat at base of marginal cusps; basal chamber usually large to quite large, cup-shaped, set apart by a true diaphragm with a small hydropore, diaphragm thin, horizontal to slightly oblique; hydrothecal rim with about 8–11 cusps separated by deep U-shaped embayments reaching 55–95 μm into rim of hydrotheca, each cusp linguiform, with blunt, rounded tip; viewed in cross-section, abaxial side of cusp strongly concave and U-shaped, adaxial side convex; base of each embayment expanded outwards, contributing to undulated appearance of hydrothecal rim in cross-section; in lateral view, resulting folds may appear as faint longitudinal lines extending a short distance down hydrothecal wall. Hydranths highly contractile, fully retractable into hydrothecal cavity, each with a distal whorl of filiform tentacles; tentacle number appearing to be about 16–20 from preserved material; hypostome globose to dome-shaped.

Among other described species of Clytia Lamouroux, 1812  , C. Joycei resembles C. gigantea ( Hincks, 1866)  , originally described from Lamlash Bay, Scotland. Unlike the boreal C. gigantea  , hydroids of the apparently warmtemperate/tropical C. Joycei are stolonal rather than erect and branched in colony form, and their hydrothecae are much smaller (<1 mm vs. 1–3 mm in hydrothecal height) and cylindrical rather than gradually tapered. Also similar is the hydroid of C. fascicularis Fraser 1938a  from the Pacific coast of the Americas (southern California to Peru). In C. fascicularis  , however, cusps at the margin of the hydrotheca are not as deeply cut, colonies are sometimes erect rather than stolonal, and stems may be slightly polysiphonic.

Although gonophores and gonothecae were lacking in the present material, there is little doubt that this species is referable to Clytia  . The following combination of characters accord with current diagnoses of the genus (Calder 1990 [1991a]; Cornelius 1995; Bouillon et al. 2006): (1) colonies were minute and stolonal; (2) hydrothecae were deeply campanulate and radially symmetrical, with marginal cusps, unthickened perisarc, a true diaphragm, and no operculum; (3) a subhydrothecal spherule was absent. From existing diagnoses of Clytia  , it is likely that gonothecae of the species will prove to be conical to clavate in shape, and that a free medusa stage will be liberated.

Following the nematocyst classification and nomenclature of Östman (1979a, 1999), two types of nematocysts were observed in polyp stages of C. Joycei, A-type b-rhabdoids (also known as microbasic b-mastigophores) and much larger but less common B-type b-rhabdoids ( Fig. 13View FIGURE 13). Capsules of the larger nematocysts somewhat resemble merotrichous isorhizas, as described by Lindner & Migotto (2001) in Clytia noliformis  , although they were smaller than in that morphologically distinct species. For information on the cnidomes of certain species of Clytia  , and on the utility of nematocyst categories and sizes as useful taxonomic characters in the genus, see works such as those by Östman (1979a, b, 1999), Lindner & Migotto (2001, 2002), and Lindner et al. (2011).

In addition to its occurrence in southwest Florida, C. Joycei has been collected from the Caribbean coast of Panama. Hydroids from the Bocas del Toro area (ROMIZ B4375), re-examined and illustrated here ( Fig. 14eView FIGURE 14), were reported as Clytia  sp. C by Calder & Kirkendale (2005). They too were sterile. Specimens from Panama are smaller but otherwise morphologically indistinguishable from those collected in Florida.

Etymology. The specific name honours Edwin Anthony Joyce, Jr. (1937–2014), who studied hydroids of the Florida Gulf Coast while a graduate student at the University of Florida, Gainesville. His M.S. thesis ( Joyce 1961) has been cited frequently in this report. 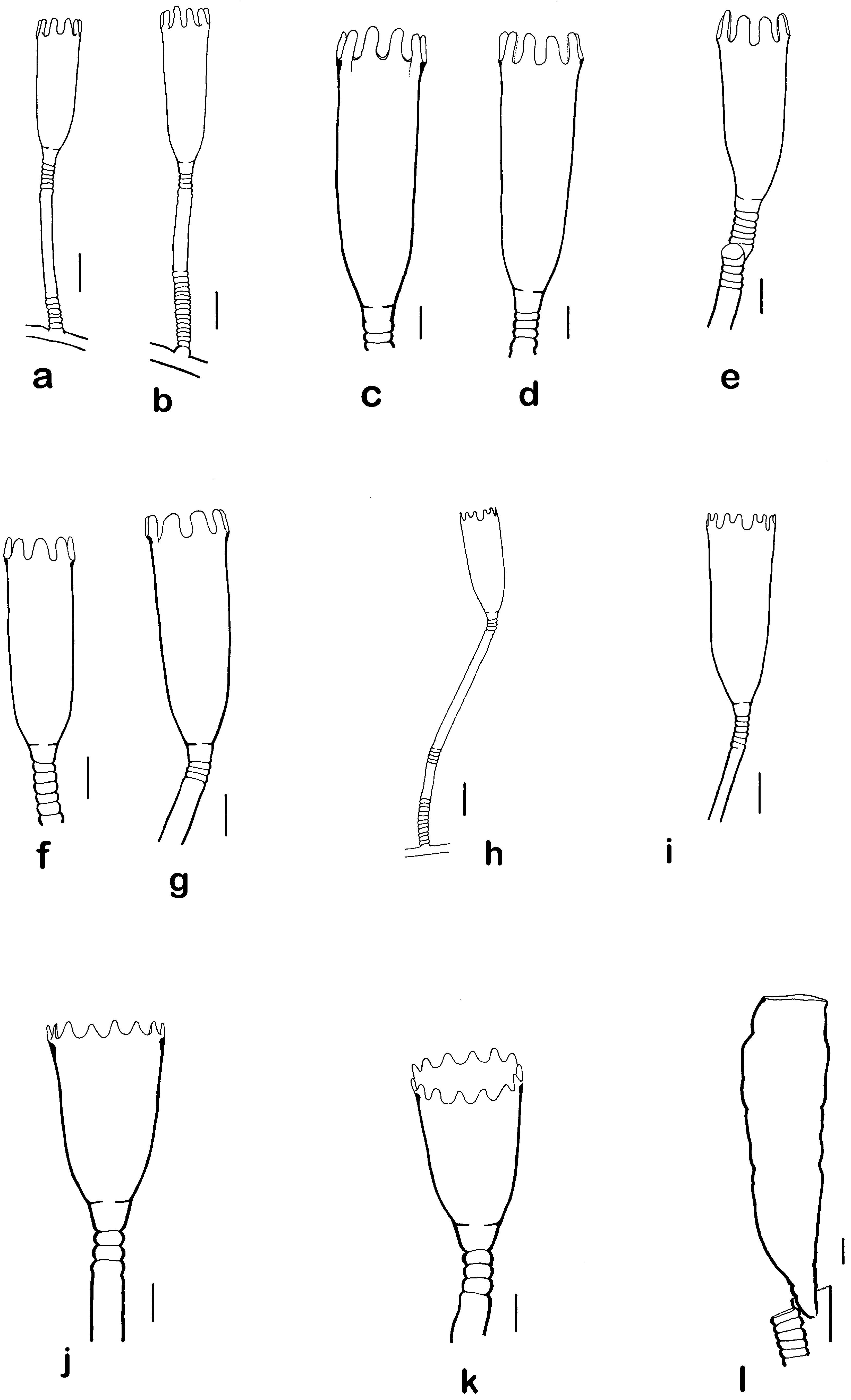