Cyclosystems placed sympodially on thin branches and aligned laterally on thicker ones. Cyclosystems round to slightly oval shaped at their opening, 1.0– 1.3 mm wide (average 1.2 mm, n=15, σ=0.1) based on the measurement of terminal cyclosystems. Each newly formed cyclosystem is raised on a markedly conical structure that narrows towards its base ( Fig. 5a View FIGURE 5 ). The sympodial arrangement of cones is visible in thinner branches, whereas cyclosystems are more flush in thicker ones.Terminal cyclosystems bear 12–16 dactylotomes (mode 13, n=15). Basal cyclosystems often bear less dactylotomes in their adcauline margin, which is more sunken in coenosteum. Dactylotomes 77–122 µm wide and occupy about one third of the total gastropore tube length.

Gastropores round, 0.6–0.7 mm wide at base of pseudosepta. Gastropore tube short and double-chambered, widening towards opening and bears constriction at about 1/3 distance from base ( Fig. 5b View FIGURE 5 ).

Ampullae may be present as a bulge adjacent to cyclosystem, around 0.6 mm wide ( Fig. 5c View FIGURE 5 ), or as numerous bulges partially or completely sunken in branch and polychaete tube coenosteum. Spherical cavities on surface of polychaete tube wall correspond with ampullae ( Fig. 4d View FIGURE 4 ). Internal diameter of five ampullae from a cross section of two branches is 0.5–0.6 mm.

Discussion. Conopora laevis   was originally described by Studer (1878) as Stylaster laevis   based on a specimen from New Zealand. Zibrowius (1981) stated that Studer´s (1878) original descriptions of Stylaster laevis   and Stylaster obliquus   based on holotypes from New Zealand belong to the same specimen. He also mentioned that those holotypes, together with syntypes of Conopora tenuis   from station 170 of the Challenger expedition to Kermadec islands, described by Moseley (1879), are very similar in cyclosystem structure and branch texture and he suggested that they all belong to the same species. Zibrowius (1981) examined specimens from station 171 of the Challenger expedition, identified doubtfully (with an interrogation mark) by Moseley (1881) as Stylaster laevis   , and stated that they are Conopora verrucosa   . Cairns (1991) examined specimens from New Zealand, providing new records of Conopora laevis   and Cairns (2015) described new specimens of C. laevis   from New Caledonia.

Specimens from study area are similar to Conopora verrucosa   and Conopora laevis   in growth pattern and delicacy, presence of a polychaete tube and sympodial arrangement of cyclosystems. Presence of numerous conical nematopores on surface of branches and cyclosystems, similar to those described by Cairns (2015) for C. verrucosa   , suggests specimens could belong to this species, since C. laevis   often lacks or bears very few and/or inconspicuous nematopores ( Cairns 2015). Presence of diastemas also supports this hypoteses. However, the presence of numerous internal and partially internal ampullae in branches and in polychaete tube coenosteum of specimens suggests they could belong to C. laevis   , since C. verrucosa   only bears ampullae around cyclosystems and efferent pores on pseudosepta ( Cairns 2015). Regarding pores on ampullae from polychaete tube of studied specimens, these could be apical efferent pores instead of nematopores, which may suggest they belong to male specimens of C. laevis   , although further examination of more specimens is necessary to confirm this. The ampulla adjacent to cyclosystem seen in Fig. 5c View FIGURE 5 has the characteristics of a female ampulla of C. laevis   although it lacks the lateral efferent pore described by Cairns (2015) (it might not have developed yet). Regarding pores present on pseudosepta, it is improbable they are efferent pores since they do not differ in size with the nematopores at surface of branches, no ampullae have been found surrounding cyclosystems and there is more than one pore on each pseudoseptum, in contrast with C. verrucosa   where there is only one large efferent pore per pseudoseptum and its size is considerably larger than that of pores in pseudosepta of specimens from study area. These are therefore most probably C. laevis   , although it is necessary to study the type material of this species to confirm this. Should they belong to C. laevis   , this record is a novelty for the SWA. 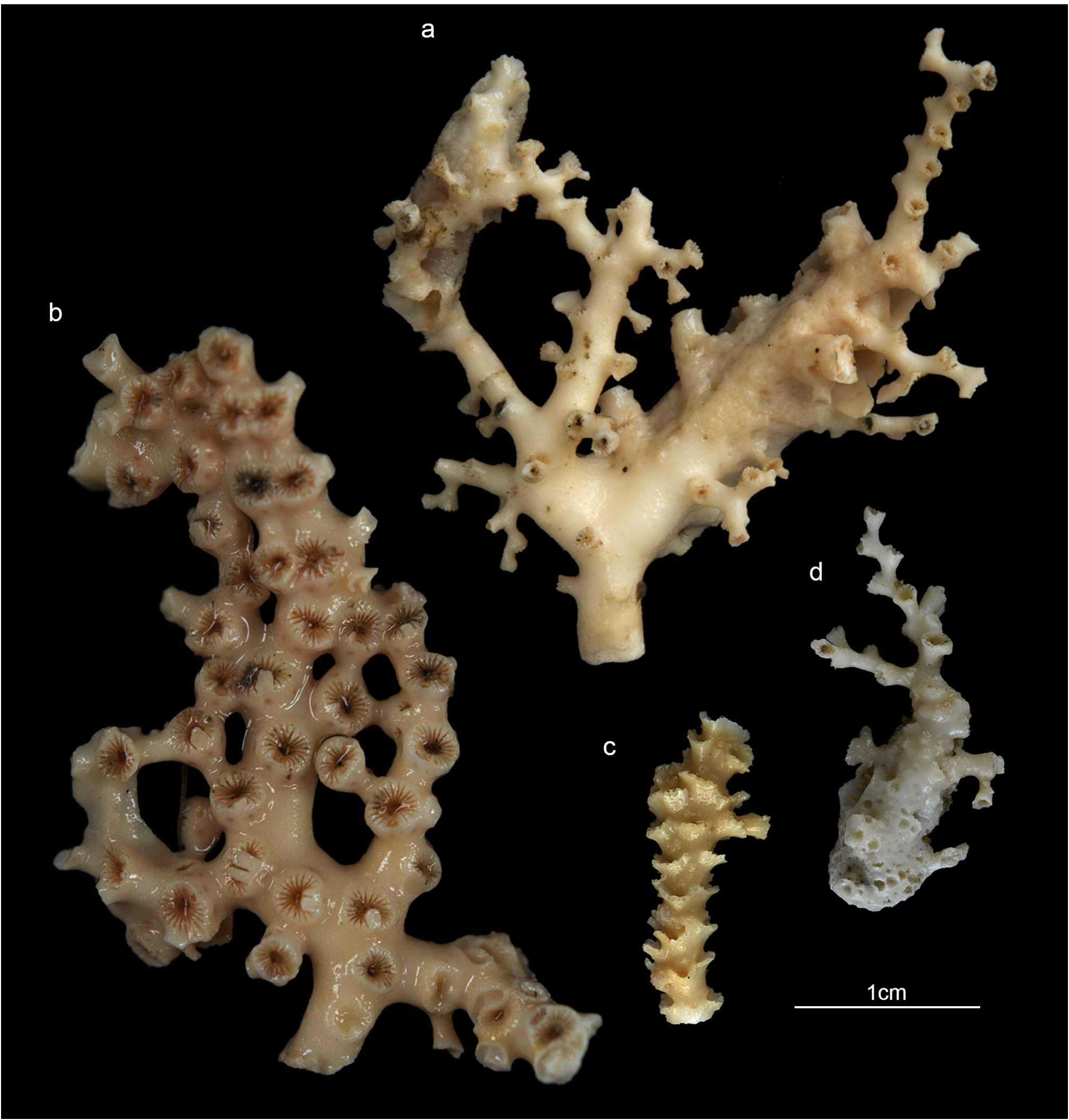 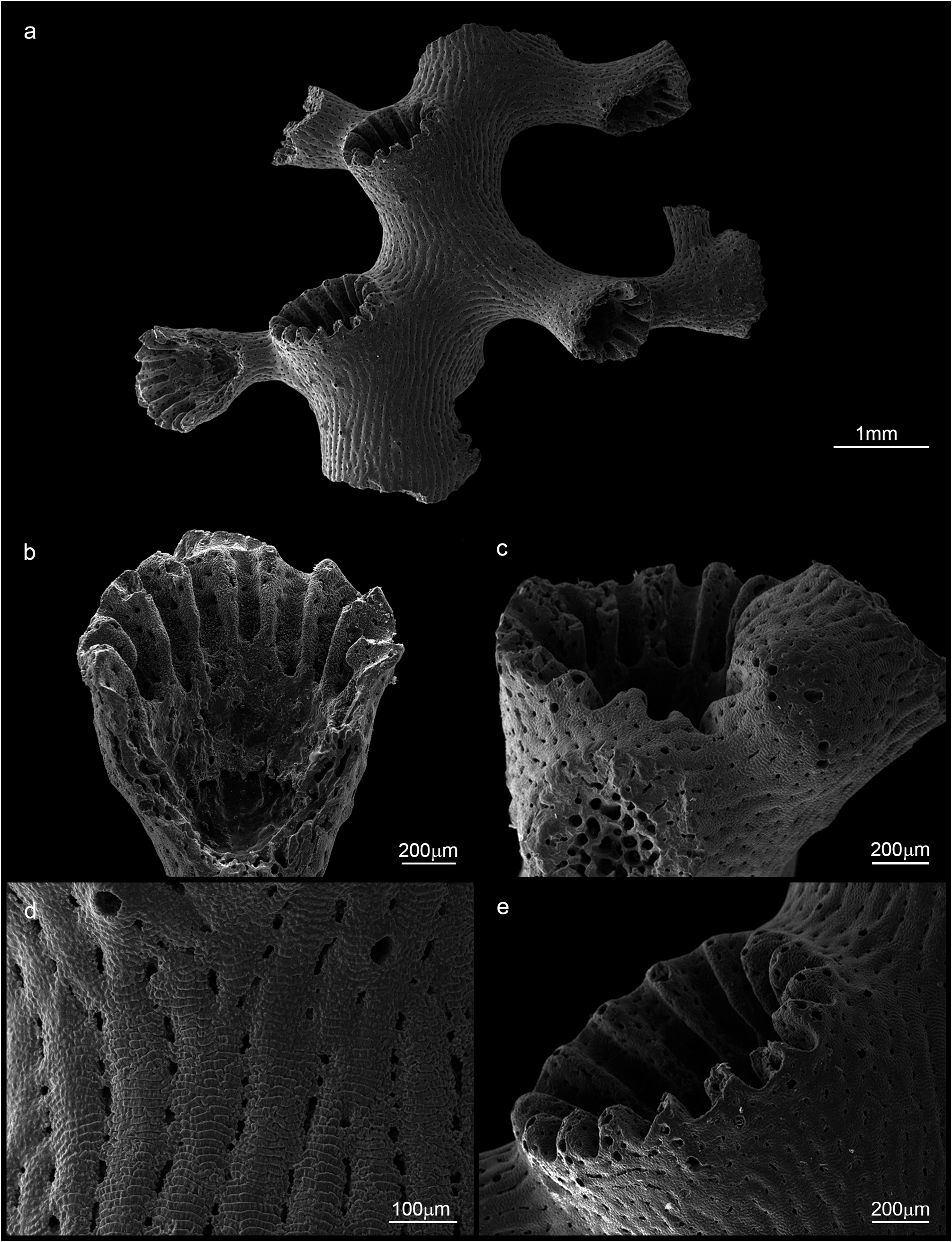