Description. Uniplanar growth with non-expansive base. Dead specimens of the scleractinian Bathelia candida   or octocorals frequently used as substrate for attachment ( Fig. 2 View FIGURE 2 ); several points of attachment with substrate, so primary basal branch is not recognizable. Dichotomous branching ( Fig. 3a View FIGURE 3 ) with frequent anastomosis. Largest specimen examined (MACN-In 42493) 9.1 cm wide and 7.5 cm tall. Thickest basal branches 6.8 x 6.6 mm and 5.2 x 5.6 mm in diameter. Thinnest branches down to 1.0 x 2.0 mm in diameter. Anterior and posterior face well defined. Branches rectangular to elliptical in cross section, with larger axis perpendicular to plane of fan. Thickest branches usually smooth on posterior side whereas thinner ones frequently bear a thin ridge, which can be discontinuous, with its elements placed in postero-lateral position ( Fig. 3d View FIGURE 3 ). Ridge may also be present on anterior side of branches, being coarser and less defined in thickest ones. Intermediate-diameter branches often bear vestigial ridges on posterior face, which are present as low, short longitudinal or diagonal coenosteum rims. Incipient branchlets have a more rounded tip and more dactylopores than elements of a discontinuous ridge, which are more sharply edged and bear one or no dactylopores ( Fig. 3c, d View FIGURE 3 ). Polychaete tubes rectangular/ovoid in cross section, with larger axis parallel to plane of fan, present on anterior or posterior face, along or transverse to branches. Those on anterior face have a coarse texture, with granules and longitudinal coenosteum rims, whereas those in posterior face are usually smoother. Both anterior and posterior tubes may bear a few rounded perforations on top. Sides of tubes partially sealed, allowing worm to be seen through ovoid openings.

Gastropores round, arranged in a row on lateral or antero-lateral sides of branches. Diameter 0.16–0.33 mm (average 0.24 mm, n=32, σ=0.05). Abcauline margin of gastropores often bears a bulbous prominence that corresponds to a developing branchlet ( Fig. 3b, c View FIGURE 3 ). Gastropore tube short and peripheral. Basal section of tube spherical, following gastrostyle shape closely. At about 2/3 of gastrostyle total heigth, gastropore tube constricts taking on a conical shape which widens towards the surface. Illustrated gastrostyle ( Fig. 3g View FIGURE 3 ) robust and short (Height: Width ratio=2.1). Base cylindrical, without spines and occupies about 1/3 of total gastrostyle length. Central third of gastrostyle widened in a crown of short, thick spines that fuse together and are arranged uniformly. At tube constriction gastrostyle narrows abruptly into a thin tip that almost reaches coenosteal surface and bears a few spines arranged in diagonal rows.

Dactylopores round, with an elevated perimeter ( Fig. 3e View FIGURE 3 ) and scattered uniformly on all surfaces, although less abundant on posterior face. External and internal diameter 71–113 µm and 37–65 µm respectively. Dactylostyles absent. Ampullae ovoid, placed just below surface with larger axis parallel to it, up to 0.68 mm in larger internal diameter. Sex unidentified.

Discussion. Cheiloporidion pulvinatum   was originally described by Cairns (1983a) based on specimens collected off Bahía Blanca and Cape Horn. That same year Cairns (1983b) redescribed the genus based on the same specimens and including more details. Bax and Cairns (2014) mentioned the occurrence of Cheiloporidion pulvinatum   at two more locations, Burdwood Bank and Shag Rocks in the Scotia Arc, but specific information about the geographic location and depth of these stations, as well as number of specimens, has hitherto not been published. Río Iglesias et al. (2012) identified C. pulvinatum   among stylasterids collected in Patagonia from 42° S to 48° S within a depth range of 200–1500 m (specific depth and position not given).

Specimens collected in the study area agree with Cairns’ (1983a, 1983b) description of Cheiloporidion pulvinatum   in all characters described. Regarding coenosteal texture, Cairns (1983a, 1983b) described it as reticulate and smooth, without granules. Some of the specimens here described have coenosteal strips with a granular texture, so it is possible that the texture of C. pulvinatum   is initially granulate and subsequently wears down. The bathymetric range and location of the collected specimens coincides with those previously reported by Cairns (1983a, 1983b). 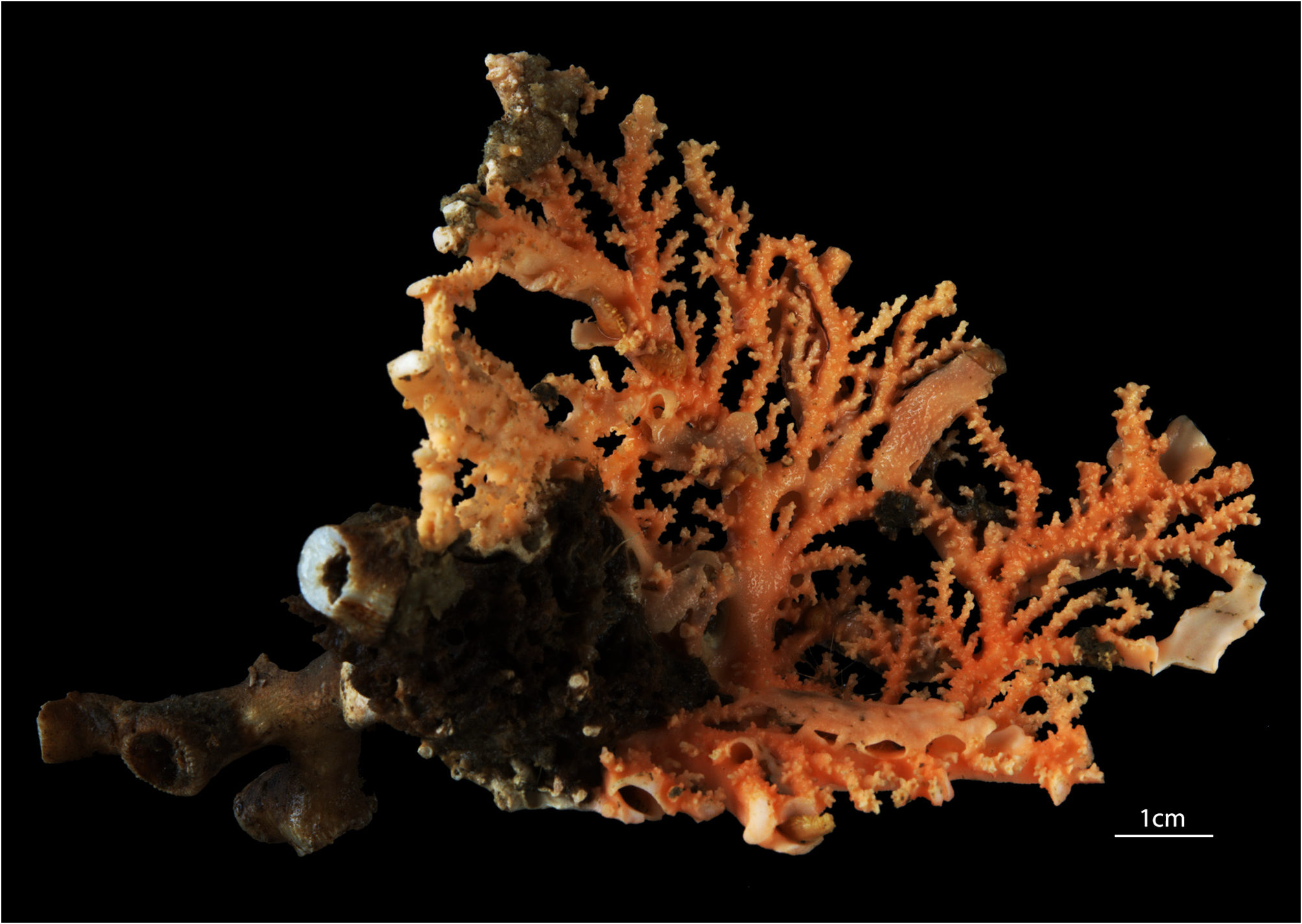 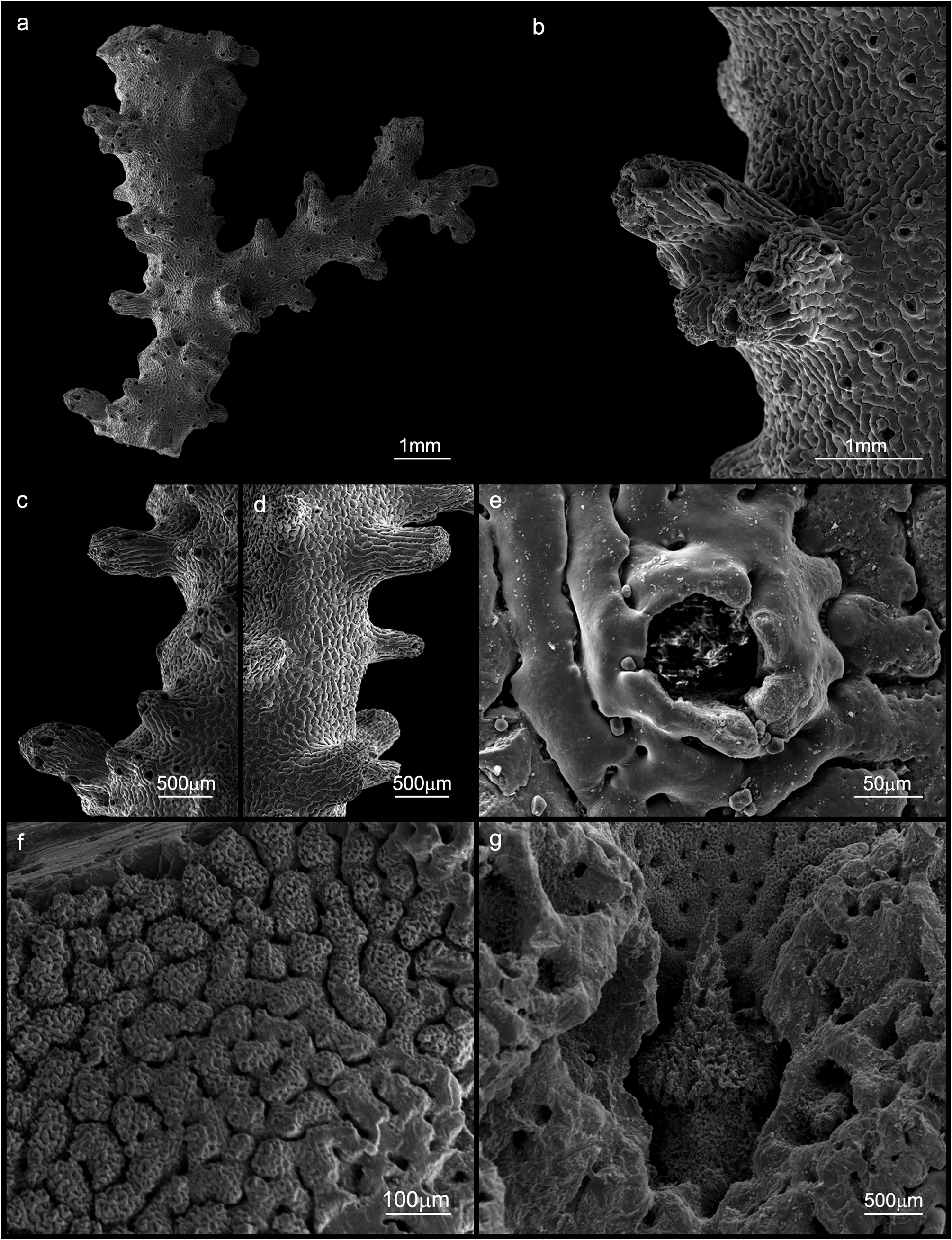