Habitat and distribution. Limnadopsis paradoxa   lives in freshwater intermittent ponds and lakes, that are somewhat turbid or humic. More is known about the habitat of this new species than the others, because the author is personally familiar with the area. The ponds and lakes fill every few years and may take two or more years to dry (e.g., Lake Bryde, Cale et al., 2004) or dry within months (e.g., pools on Sieda Farm, A. Longbottom, pers. comm.). In all sites it was found only in the early period of inundation. It is known mainly from the southeastern wheatbelt of Western Australia, specifically south of Newdegate and north of Esperance. Two outlier populations were found much further east, in central South Australia and in southwestern NSW.

In Lake Bryde, it was collected in March, 2006, six weeks after a major filling, and at the time the lake was fresh ( EC 549 µS/cm), alkaline (pH 7.8), warm (21.8°C), well oxygenated (88% saturation), and only slightly coloured (D. Cale, pers. comm.) This lake fills to overflowing only occasionally (every few years in the 1990s to 2000s, S. Halse, pers. comm.); normally the episodic fillings result in a shallow, fresh to slightly saline lake that takes 12–24 months to dry. At such times it holds the clam shrimps Caenestheria sp.   and Caenestheriella sp.   , but apparently not Limnadopsis paradoxa ( Cale et al., 2004)   .

Etymology. The species name derives from the paradox presented upon first examination: it has a carapace resembling L. birchii   and a body-form superficially resembling L. tatei   , but it differs from these two species on detailed examination.

Head ( Fig. 13B View Fig ) with a pear-shaped pyriform frontal organ posteriorly, preceded by rounded prominence containing eye, then by large rostrum at right angles to head. Length of rostrum similar to length of anterior surface of head and about twice its own basal width. Rostrum curved downwards apically and containing triangular naupliar eye dipping at angle to rostrum axis and occupying much of its basal area.

First antenna with 11 subequal lobes, slightly longer than peduncle of second antenna. Two flagella each bearing 15–18 beaded flagellomeres, each of latter with up to 6–7 spines evenly spaced along dorsal surface.

Trunk segments 26. Dorsally, posteriormost segment with spineless protuberance, preceding 7–8 segments each with 3–5 spines on protuberance, then further anteriorly another 7 segments with 5–9 long setae each. Hand of claspers with blunt narrow outgrowth near inner basal corner. Third thoracopod ( Fig. 4D View Fig ) similar in structure to that of L. birchii   . Proportions of endites, endopod, exopod and epipodite slightly different, and significantly palp of fifth endite slightly shorter than fifth endite and epipodite proportionally smaller. Other thoracopods of same basic structure, but without palp and with larger epipodite.

Telson ( Fig. 13C View Fig ) with two rows of 13 to 14 strong, subequal spines, although the first spine slightly larger than next few spines and curving slightly posteriorly, middle spines slightly smaller and posterior spines more widely spaced, and sharper last spine near apex of claw. Two telsonic setae inserted on protuberance about one quarter of way along dorsal side of telson. Caudal claws well developed, at least twice as large as telsonic claws, curved concavely dorsally, with basal two-thirds bearing about 20 setae mesodorsally and terminating in a spine. Apical third of claw with many fine denticles dorsally.

Female. Carapace ( Fig. 13E View Fig ) 13.5 mm by 9.7 mm. Similar to that of male, but anterior concavity less pronounced and highest point of carapace at about midlength. Carinae of growthlines prominent, but blunt compared with those of male.

Head ( Fig. 13F View Fig ) similar to that of male, but rostrum short, about as long as deep, and blunt. Naupliar eye of about same size and position as in male, thus occupying much of rostrum. First antenna shorter than in male, with about 8 lobes. Second antenna as in male.

Number of body segments, and details of telson ( Fig. 13G View Fig ) similar to those in male.

Variability. The carapace size varies from c. 13 to16 mm, growth lines from 10 to 14, first antennal lobes 9 to 11, telsonic spines 15 to 18, and caudal claw setae from 16 to 21. There is no significant variation in the characteristic carapace shape, and all specimens have just one spine on the caudal claws.

Comments. Limnadopsis paradoxa   resembles small specimens of L. birchii   , on account of its size, general shape, development of the carinae, and perhaps colouration. However, the body inside bears absolutely no resemblance to that of L. birchii   . For instance there are 26 body segments, not 32, and there are only c. 14 telsonic spines on a almost straight edge compared to c. 50 spines on a doubly curved edge. The new species is most like L. tatei   but has more growth lines, more lobes on the first antenna, more telsonic spines and more setae on the caudal claws. Perhaps it could be regarded as a bigger form of L. tatei   , but the shape of the carapace is distinctive, particularly the concave dorsal surface and the lateral development of the umbo. The smaller first:second telsonic spine size ratio in L. paradoxa   , and more numerous caudal claw setae are also distinctive. Limnadopsis pilbarensis   n.sp. (see below) differs by having a convex edge in the umbo area, much less pronounced development of the dorsal outgrowths of the growth lines, and fewer telsonic denticles and setae on the caudal claws.

The eggs of L. paradoxa   and the three other abovementioned species are distinctive among themselves. At 40× magnification, eggs of L. birchii   and L. tatei   are smoothly round with groups of parallel grooves, more of the latter in L. birchii   than in L. tatei   . Eggs of L. paradoxa   and L. pilbarensis   both have rough surfaces, but those of L. pilbarensis   have many (> 20) spines and those of L. paradoxa   have just a few (<8) rounded prominences. These distinctions are even more pronounced as observed by SEM ( Fig. 4 View Fig ). 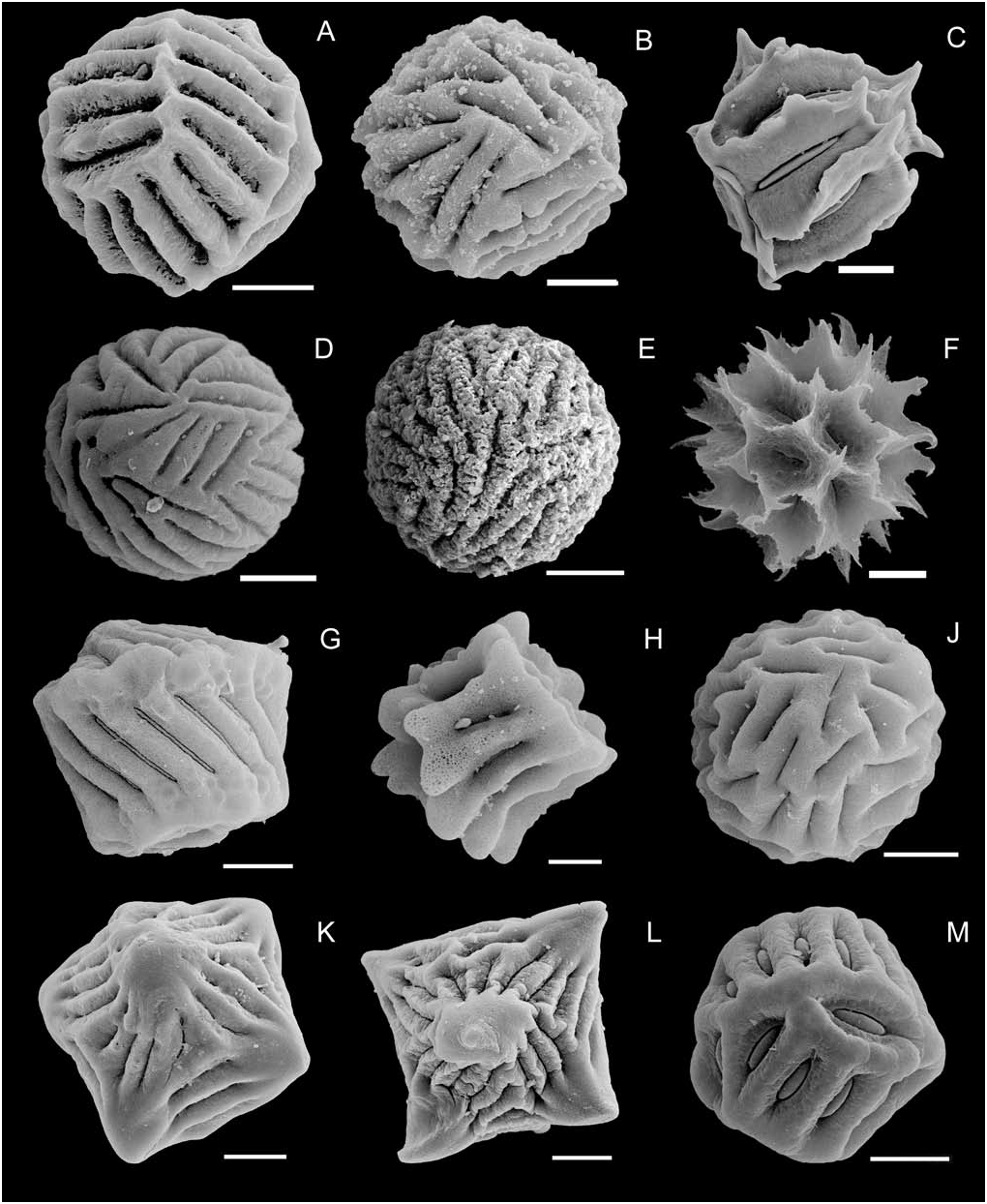 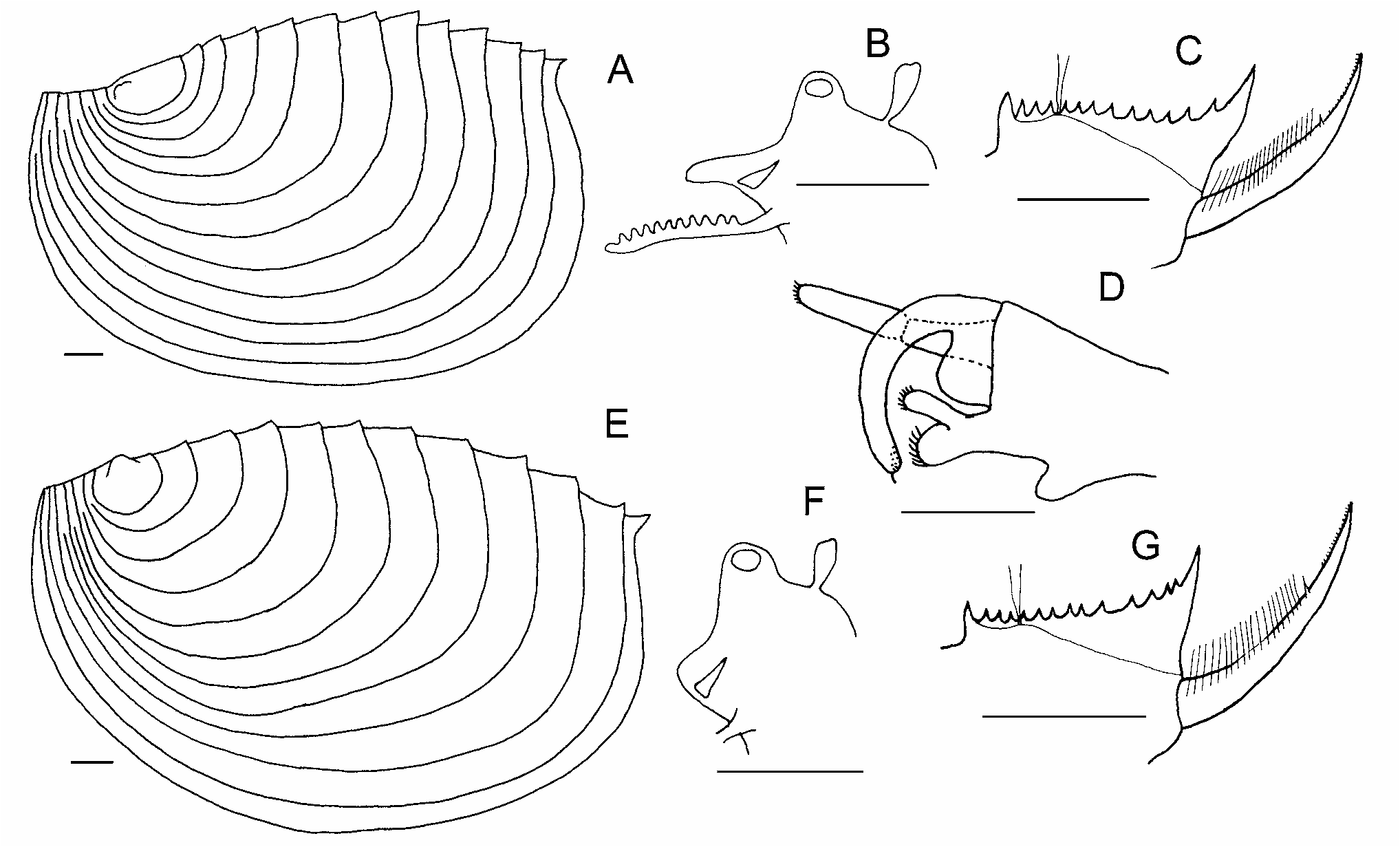