Remarks. A single male of P. viridulus   n. sp. was found in the collection of the BMNH coming from the Mazumbai forest reserve. It is smaller than the Lutindi specimens and also has a stouter subgenital plate. The tegmina do not reach the posterior margin of the second abdominal segment as in the Lutindi specimens. Molecular and acoustical analyses could clarify the species status.

Chromosomes. The standard karyotype of Philoscirtus viridulus   n. sp. consisted of 29 chromosomes in the male, with the X0 sex chromosome system (FN= 38; FN is the number of chromosome arms, including the X chromosome). Autosomes can be divided into three size groups: three large submetacentric (L 1, L 2, L 4) and one large acrocentric (L 3), six medium acrocentric pairs (M 5 -7, 9- 11) and one medium metacentric (M 8) as well as three acrocentric short pairs gradually decreasing in size. The metacentric X chromosome is the largest in the set ( Fig. 7 View FIGURE 7 A). The morphology of the chromosomes is clearly seen in metaphase II ( Fig. 7 View FIGURE 7 B). C-banding of spermatogonial mitotic metaphase and meiotic cells revealed constitutive heterochromatin in the paracentromeric region of most of the chromosomal elements and occupied the region next to the centromere (thick C-bands). Interstitial C-bands were located in one medium pair (M 3), additionally telomeric C-bands occurred in most of the large and medium sized autosomes and in both arms of the X chromosome ( Fig. 7 View FIGURE 7 A, C). Silver staining revealed the presence of one large active NOR in the paracentromeric region of the large sized bivalent (L 2). It corresponds to a thick heterochromatin block and five “secondary” small NORs (not always visible) on three medium and two small bivalents ( Fig. 7 View FIGURE 7 D). A B chromosome (B), which is supernumerary to the standard complement, being of metacentric type and similar to small sized pairs of autosomes was mitotically and meiotically unstable. From diplotene to metaphase II, this element occurred as univalent or bivalent ( Fig. 7 View FIGURE 7 A, B, C, E).

Biology. P. v i r i du l u s n. sp. individuals were captured at night from small trees and bushes along paths creating some canopy gaps through the closed submontane forest in February 2014. Males and females rested on broad leaves in about 2–3 m height and were very sensitive to disturbance. Therefore only two males could be caught. In October 2014 no individuals could be obtained at the same localities.

Habitat. Submontane and montane forests in the West Usambara Mountains.

Ethyology. From latin: - viridis = green, ending - ulus from latin: small, because it is predominantly green and smaller than P. cordipennnis   . 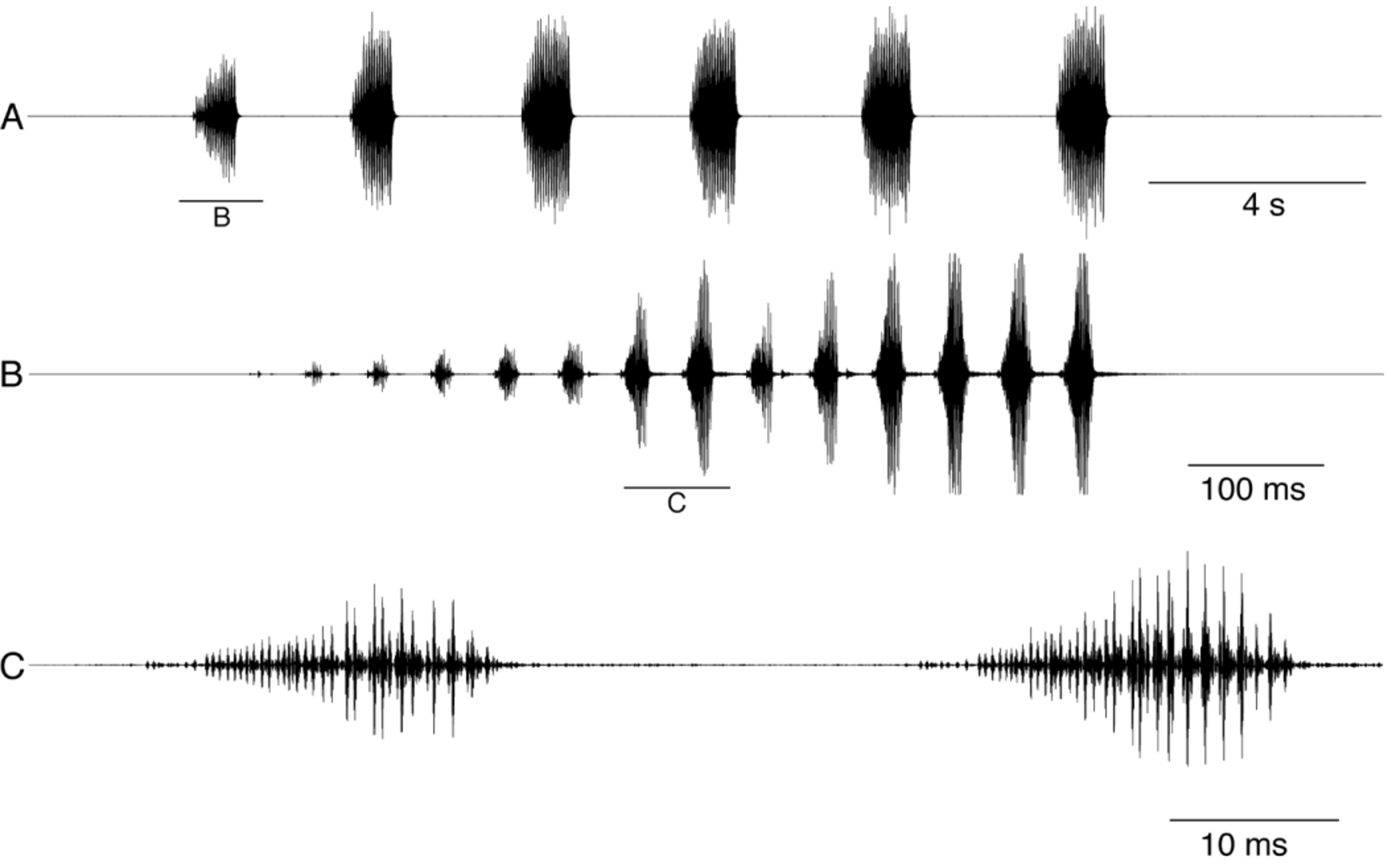