Etymology. The species is dedicated to Gisella Castilla, whom I affectionately call “Gise”, a name in apposition. Thanks for all these years of supporting and trusting me.

Diagnosis. Phrynus giseae   sp. nov. presents one conspicuous tooth in the ectal row of the base of chelicerae, with an acuminated apex ( Fig. 10F View FIGURE 10 ). Without an inconspicuous spine in the dorsomedial area of the tarsus, Pd2 half of the size of Pd4, Fv3 smaller than Fv5, Td1 is small, similar in size to Td4 ( Fig. 11 View FIGURE 11 ). Female genitalia with gonopod bases elliptical and a little elongated; sclerites of gonopods are triangular, with light coloration, and placed in a convergent way ( Fig. 17D View FIGURE 17 ). In the male genitalia, the projections over LoL1 and 2 are conical, short, and thick. The LoD is thin and a few pronounced ( Fig. 12 View FIGURE 12 , Table 6).

Species comparisons: Phrynus giseae   sp. nov., is similar to P. operculatus   , P. jalisco   , and P. aliciae   sp. nov., however, the female sclerites of the gonopods in all these species are bigger, more robust, and stick out from gonopod base ( Fig. 17 View FIGURE 17 ). Also, in these three species, the Pd2 has a similar size to Pd4, in P. giseae   sp. nov. the Pd2 is evidently smaller ( Fig. 11D View FIGURE 11 ). The ornamentations over the LoL 1and 2 in the male genitalia are different from other species as well as the size of LoD ( Fig. 12B, C View FIGURE 12 ).

Abdomen. Oblong, color dark brown. Presents lines of light coloration on each tergite. The carapace is as wide as the abdomen ( Fig. 10C View FIGURE 10 ).

Chelicera. The mesal row of the basal segment of chelicerae with three teeth, the first is bilobed, placed in the proximal portion, lobe 1b bigger than 1a, followed by one tooth shorter in medial portion, and the third, bigger than the others, placed in the distal region ( Fig. 10D View FIGURE 10 ). The ectal row with one conspicuous tooth (tooth 2) with an acuminated apex, placed in the medial region. There is a small keel on the most proximal region (tooth 1) ( Fig. 10F View FIGURE 10 ). The mobile segment of chelicerae with four teeth, the first and third are the biggest.

Female genitalia. Genital operculum pentagonal, it extends to the second segment of the opisthosoma. Gonopod bases elliptical, dorsal surface poorly sclerotized on the medial region, and more sclerotized on the lateral external margins; on the most proximal area, there is a sclerotized line joining both gonopod bases, coloration brown in the most proximal region, and white on the medial area and internal margins, brown coloration on the external margins. Sclerites of the gonopods triangular and placed convergent, the base is more than three times wider than the apical region, apex acuminated, color light brown, darker at the medial region ( Fig. 17D View FIGURE 17 , Table 6).

Variation. Type series measurements and the number of segments in the basitibia IV, Tibia I and tarsus I, are summarized in Table 4. Sternum: Setae over all segments of the sternum are variable in number and position. Pedipalp: Trochanter: The number and size of dorsal tubercles are variable from five to seven. Femur: Ventral face: the presence of the tubercles is variable, in larger specimens the tubercles are more visible and other tubercles can be present, between Fv3 and Fv4 can be present a Fv4a. Dorsal face: the size and presence of tubercles mentioned in the holotype are variable in the paratypes, Fd4 and Fd5a can be present but small. Patella: Ventral   face: Tubercles were more conspicuous in larger individuals; other small tubercles can be present between spines. Dorsal face: in some individuals, there is a tubercle anterior to spine Pd1, spine Pd1a is always present but can be small. In larger individuals, the spine Pd8 is present, smaller than the others. Legs. The number of segments of the tibia and tarsus of leg I, was variable among the individuals, the number of tibial segments varies between 29 and 31, and the tarsal segments between 60 and 65. In observed specimens, the number of segments did not depend on size or sex ( Table 4).

Male. Observed males are similar in size to females ( Table 4) spination pattern as in females, genital operculum has the posterior margin oval and covers part of the third segment of the opisthosoma.

Male genitalia. (CNAN-T01451): LaM longer than Pi. LoL 1 bigger than LoL 2, both densely covered with minute projections, in LoL 1, projections are tubular, and a little thick, placed close together, the insertion base is not visible; in LoL 2 projections are similar to LoL 1, the insertion base is also not visible. In dorsal view, the LoD is short, little pronounced, and shorter than LoL1 ( Fig. 12 View FIGURE 12 , Table 6). 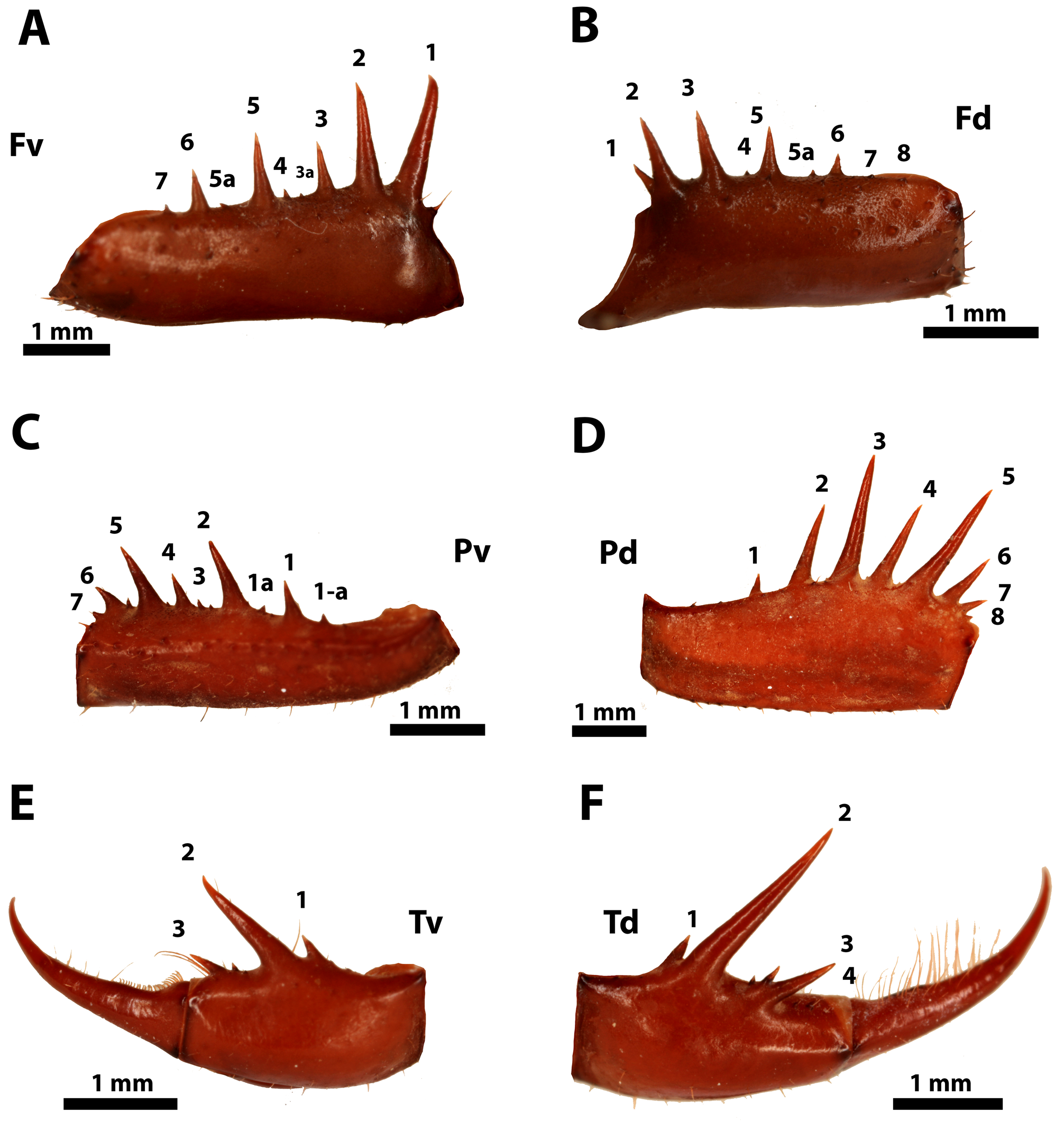 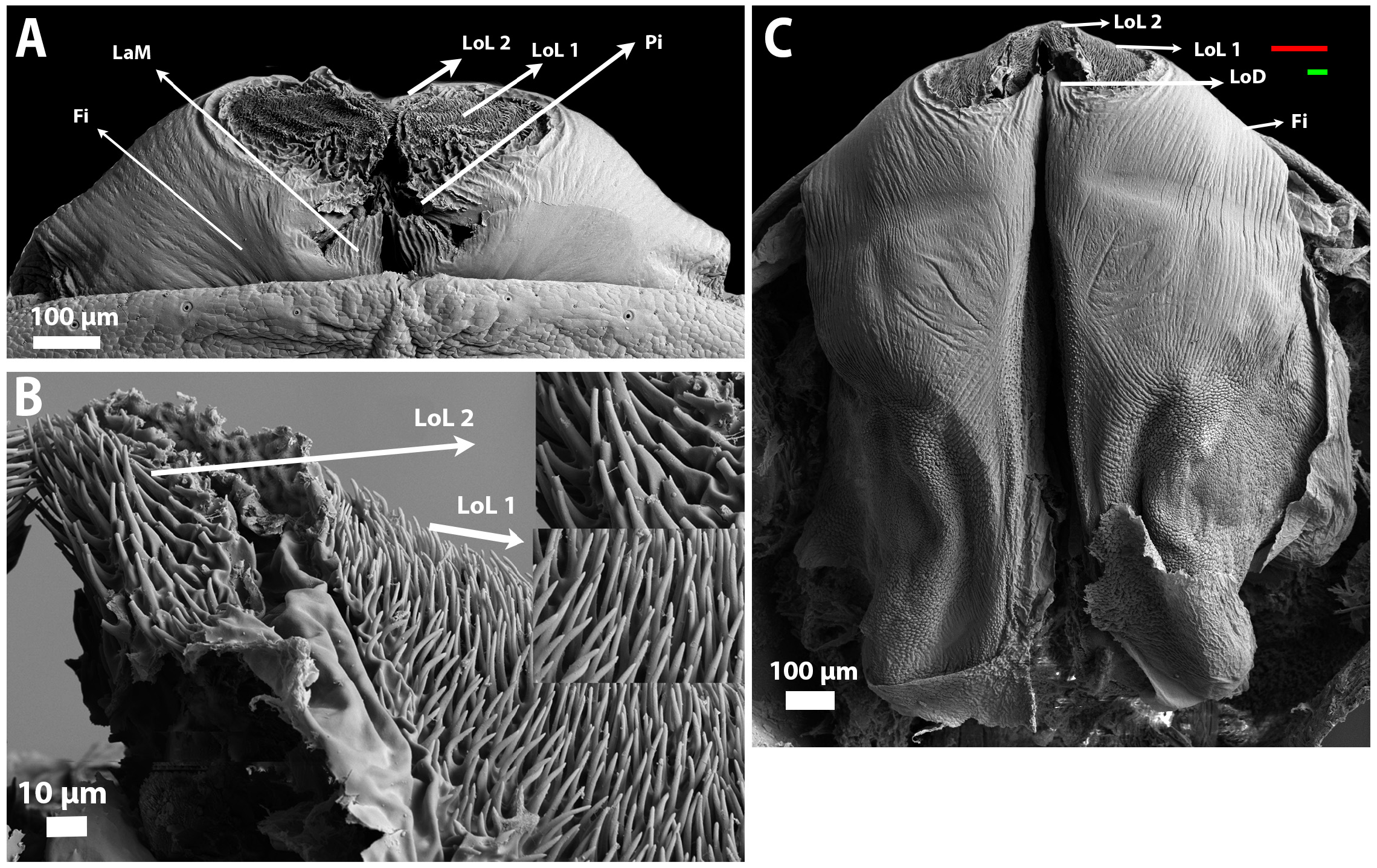