The holotype is in fair condition (left mesotarsomares 4-5, right mesotarsomeres 1-5 and right metarsomeres 1-5 missing). However, it is the only male specimen within the type series which is only slightly teneral and therefore selected to be the holotype.

E t y m o l o g y: The species in named in memory of P.S. Nathan, who collected this and other interesting Stenolophina species in southern India.

Remark: The colour description is based on the holotype and two other darker paratype specimens, most other specimens of the type series are slightly moderately immature. It maybe that fresh completely mature specimens are generally darker (as described here).

Head ( Figs 27-29 View Figs 27-29 ) including eyes rather broad (HW/PW: 0.82-0.86), with eyes markedly prominent (head 1.63-1.76 times as wide as head between eyes). Labrum rectilinear or slightly rounded at apical margin. Mandibles medium sized, not distinctly prolonged and curved, left mandible moderately sharp at apex, not thickened or truncate. Antennae rather long relative to pronotal (AL/PL: 2.41-2.62) and elytral length (AL/EL: 0.87- 0.94). Microsculpture on labrum almost isodiametric, on clypeus isodiametric to weakly transverse, on anterior half of head partly obliterated, or partly with traces of lightly to very lightly impressed isodiametric meshes, and on posterior half posterior to eyes with lightly impressed isodiametric meshes, becoming moderately transverse in front of pronotal anterior margin.

Metepisterna at inner margin about 1.5 times longer than wide at basal margin. Prosternum medially with 4-5, and in front of apical margin with a row of 7-8 longer setae. Prosternal process posteriorly with 2 longer and distinct setae. Abdominal sternites IV- VI with distinct and rather dense pubescence, in sternite IV often with a small smooth area laterally. Last visible sternite faintly ermarginate at apex, at apical margin with 2 longer setae in males and 4 in females.

C o m p a r i s o n s A. nathani   nov.sp. belongs to the Anthracus annamensis   group and represents, together with A. derogatus (WALKER, 1858)   from Sri Lanka and A. indicus JAEGER, 2012   from the Indian state of Maharashtra, the smallest species with immaculate elytra, and the fourth immaculate taxon which become known from India and Sri Lanka. It differs from A. indicus   and A. derogatus   , at a first glance by larger and markedly produced eyes (index HW/HWbE> 1.62 in A. nathani   , and <1.55 in A. derogatus   and A. indicus   ), the different shape of pronotum, the elytra which are markedly longer relative to pronotal length (index EL/PL> 2.68, instead of <2.65 in the other species) and finally by the completely different external shape und internal structure of the median lobe of the aedeagus. From A. schuhi JAEGER, 2012   , the remaining immaculate species known from India, A. nathani   can be separated by smaller size, different colour of upper surface (head and pronotum reddish yellow to reddish brown, instead of blackish brown), other body proportions and different shape and internal structures of the median lobe of the aedeagus.

All other species with immaculate elytra of the A. annamensis   occur father East in continental SE Asia, Indonesia or the Philippines, and differ from A. nathani   by larger size and/or different colour and body proportions, and finally by the different shape and internal structures of the median lobe of the aedeagus (see here and JAEGER 2012). 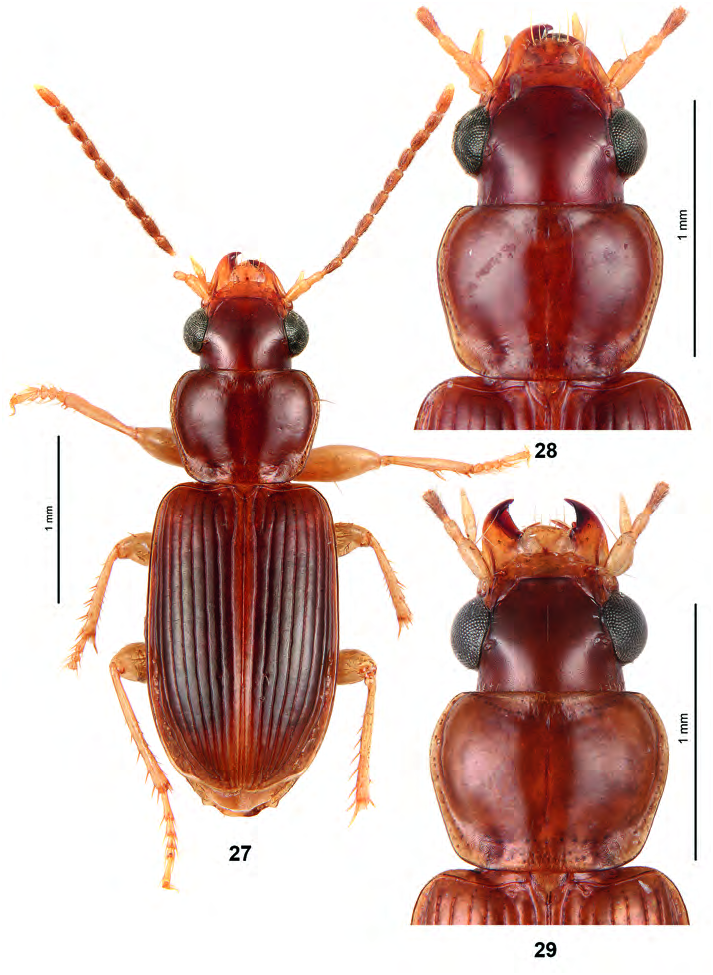 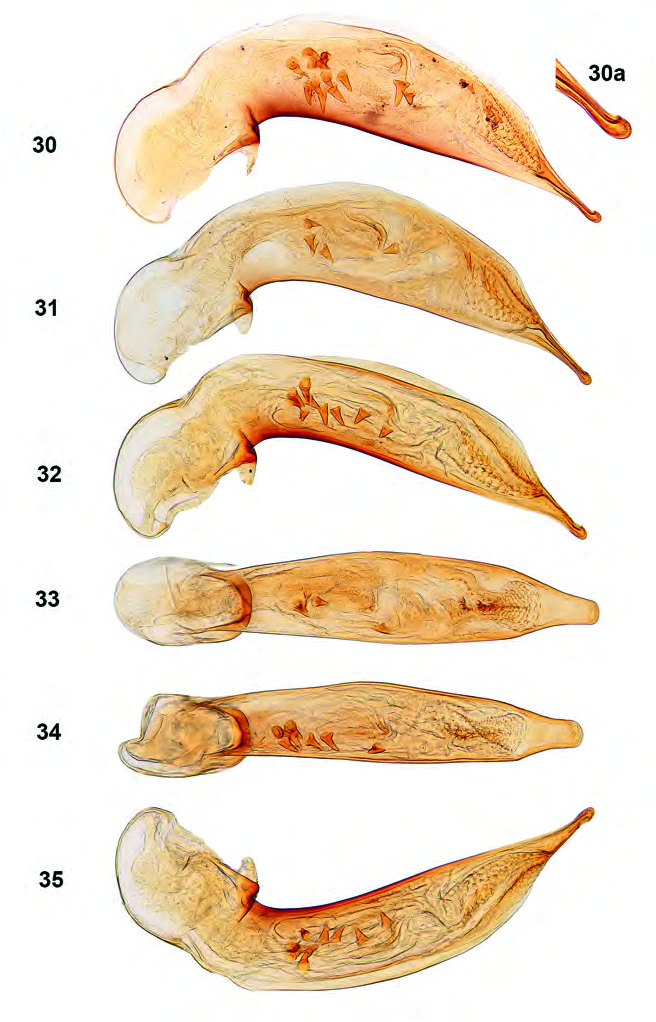