Small species (female 0.7 2 - 1.0 4 mm, male 0.6 5 – 0.7 7 mm); cuticle thin, ca. 1 μm wide and finely annulated, 0.8 μm wide at midbody. Lateral field inconspicuous, about 9% of body width, consisting one ridge that can be traced anteriorly to the level of the median bulb and posteriorly at level of rectum in females and about 1½ spicules length anterior of the cloacal aperture in males. Six lips slightly protruding, each with one apical papilliform labial sensillum and a second circle of four sublateral cephalic sensilla in both sexes; amphids opening on the lateral lips, hardly discernible. Buccal tube long and slender, more than twice the width in lip region, pharyngeal sleeve envelopes nearly half of the stoma, the anterior as well as the posterior end of the tube appear slightly thickened, cheilostom inconspicuous, arcade cells forming the gymnostom sometimes visible; glottoid apparatus completely absent. Pharynx with a prominent median bulb, diameter more than 90% of diameter of terminal bulb; terminal bulb pyriform, with double chambered haustrulum, the anterior chamber smallish; cardia conspicuous, opens funnel-like in intestine. Nerve ring encircles isthmus in its anterior part in living specimens, more to the middle of the isthmus in heat relaxed or preserved specimens; deirids usually conspicuous in the lateral field at level of beginning of terminal bulb, sometimes not visible in heat relaxed animals; pore of excretory-secretory system hard to discern posterior of deirid level. Two gland cells ventral and slightly posterior of terminal bulb conspicuous in live specimens. Lateral canals visible in live specimens extending anteriorly to two stoma length from the anterior end and ending at rectum level in the female. Postdeirids usually very conspicuous dorsally of the lateral field at about 7 5% of body length in both sexes and about half the length between vulva and beginning of rectum (or at level of posterior end of uterus remnant) in females, sometimes not visible in heat relaxed specimens.

Maximum body diameter clearly anterior of the vulva, vulva position 65% body length, a transverse slit, bordered in both ends by cuticular longitudinal flaps, vulva lips moderately protruding, four diagonal vulval muscles conspicuous; one pseudocoelomocyte exists anterior of gonad flexure ventrally. Genital tracts asymmetrical; posterior branch rudimentary, sac like, on the left hand side of intestine, without flexure, almost as long as body diameter at the level of the vulva, containing spermatozoa ( Fig. 2View Fig. 2); anterior branch right of intestine, reflexed dorsally close to the pharynx, flexure more than half the length of the gonad (measured from vulva to flexure); at the flexure oocytes in several rows, downstream in one row, oocytes predominantly growing in the last position, where granules are stored inside; sphincter between oviduct and uterus, only a few sperm cells in oviduct, most of them in uterus and blind sac; oviparous, one egg at a time in uterus (rarely two), segmentation starts in the uterus. Rectum a little S-shaped, rectal gland cells very small, posterior anal lip slightly protuberant. Tail short, panagrolaimid, dorsally convex, with offset tip tapering, smooth to somewhat telescope-like by cuticle forming a sleeve-like structure; tail tip with tiny hooks, mostly one dorsal, but also subventral (compare with Poikilolaimus  ); opening of phasmids located at 60 – 65% of tail length, shortly anterior of tip, phasmid glands not reaching anus level.

Nine pairs of genital papillae (GP) present, two of them anterior of the cloaca, genital papilla 1 (GP1) and GP2 spaced, GP3 to GP6 and GP7 to GP9 clustered, GP5 and GP7 point to the dorsal side of the velum, GP6 slightly bottle shaped, GP8 and GP9 fused at base, GP2 and GP8 not reaching the margin of velum. Phasmids forming small tubercles to the ventral side posterior of the last GP; formula of GPs: v1,v2/(v3,v4,ad,v5) (pd,v6,v7)ph. Precloacal sensillum small, precloacal lip simple (according to type A of W Sudhaus and K Kiontke [ 39]), postcloacal sensilla long filamentous. Spicules short and stout, tawny, separate, slightly curved, with prominent head; shaft with a transverse seam, with a prominent longitudinal ridge, a dorsal lamella, and an oval “ window ”, the tip notched. Gubernaculum dorsally projecting, flexible, in the distal part following the contour of the spicules, spoon shaped in ventral view.

In one female a second set of “ sensilla ” were observed a short distance posterior to postdeirids, possibly a duplication of the postdeirids.

Holotype and paratypes of Caenorhabditis monodelphis  sp. n. were isolated from the tunnels of Cis  castaneus (Herbst, 1793) ( Ciidae  , Coleoptera  ) in the bracket fungus Ganoderma  applanatum ( Polyporales  ) on a stump of the common beech ( Fagus  sylvatica) a few centimetres above the ground in Berlin-Grunewald in April 2 0 0 1. The same sample included individuals of Diploscapter  sp., Plectus  sp., Oscheius  dolichura and one individual dorylaimid and mononchid.

Caenorhabditis monodelphis  sp. n. is a gonochoristic species with both males and females. Females are oviparous and carry only one egg (rarely two eggs). Development from egg to adult took about 5 – 6 days in juice prepared from brown algae at room temperature. Development from dauer larva to adults was completed in less than 3 days at 20 ̊C on NA seeded with OP50. The lifespan of adults is at minimum 1 4 days for males and 1 7 days for females. One pair of adults produced 1 6 7 offspring in 8 days and the daily production of fertile eggs was 6 – 3 1 (mean 1 8; n = 1 4). After the reproductive phase, females lived 9 – 1 4 days (n = 3) with males present.

We sequenced the genome of an inbred strain (JU1677) of C. monodelphis  sp. n. using Illumina sequencing technology to ~110x coverage. The genome was assembled into 6,864 scaffolds, spanning 115.1 Mb with a scaffold N50 of 49.4 kb ( Table 2). CEGMA (Core Eukaryotic Gene Mapping Approach) [ 40] scores suggested the assembly is of high completeness. We predicted 17,180 protein coding gene models using RNA-Seq evidence. These statistics, and the overall gene content and structure of the assembly were largely in keeping with those determined for other Caenorhabditis  species. The genome was larger than that of C. elegans and C. briggsae, which are hermaphroditic species, but smaller than that of C. remanei, a gonochoristic species.

C. monodelphis  sp. n. is sister to other known Caenorhabditis

We clustered a total of 634,56 4 protein sequences from C. monodelphis  sp. n., twenty-two other Caenorhabditis  species, and two rhabditomorph outgroup species ( Oscheius  tipulae; data courtesy of M. A. Félix, and Heterorhabditis  bacteriophora) to define putative orthologues. We identified 34,425 putatively orthologous groups containing at least two members, 303 of which were either single copy or absent across all 25 species. These single copy orthologues were aligned, and the alignments concatenated and used to perform maximum-likelihood and Bayesian inference analysis using RAxML and PhyloBayes, respectively. Both analysis methods resulted in an identical topology, with the placement of C. monodelphis  sp. n. arising basally to all other Caenorhabditis  species ( Fig. 6View Fig. 6). All branches had maximal support except for three nodes within the Elegans super-group. Our analysis included data from several new and currently undescribed putative species of Caenorhabditis  , including C. sp. 21 which is the sister taxon to the Drosophilae plus Elegans super-groups and C. sp. 31 which forms the first branch in the Elegans super-group. C. sp. 38 is placed within the Drosophilae super-group, while C. sp.

26, C. sp. 32 (sister to C. afra) and C. sp. 40 (sister to C. sinica) are all members of the Elegans super-group. From these analyses we conclude that C. monodelphis  sp. n. is sister to all other known Caenorhabditis  .

Our phylogenetic analyses were based on species with whole genome data available, and thus did not include the full known diversity of the genus. The stemspecies pattern was reconstructed based on ingroup and outgroup comparison. Previous molecular phylogenetic analyses of Caenorhabditis  species using a small number of marker genes [ 1 0] placed C. monodelphis  sp. n. and C. sonorae [ 4 1] as sister species, again arising at the base of the genus.

By ingroup comparison we reconstruct the following characters of the stemspecies of Anarhabditis without differentiating them into apo- or plesiomorphies (on apomorphies see the legend of Fig. 7View Fig. 7): 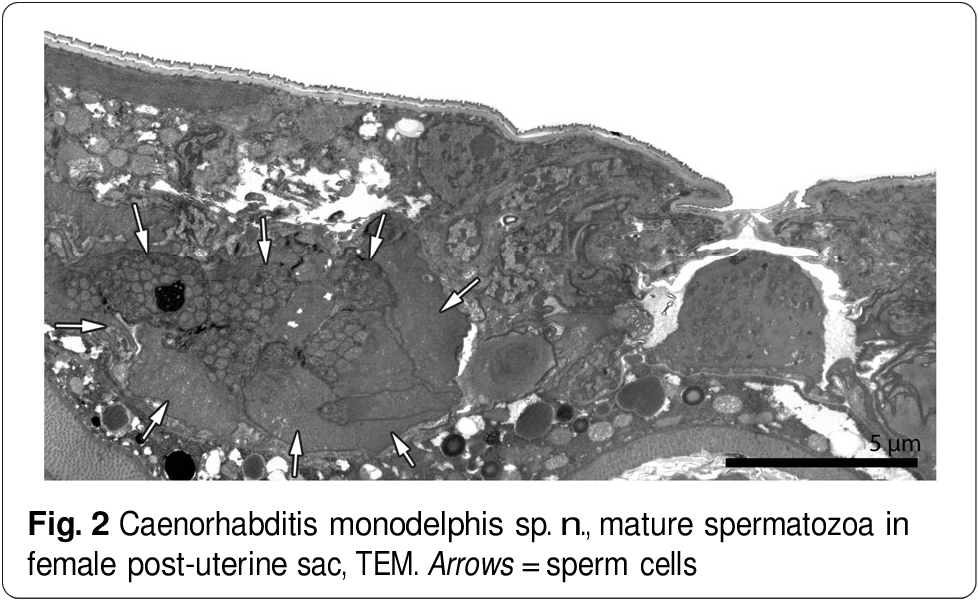 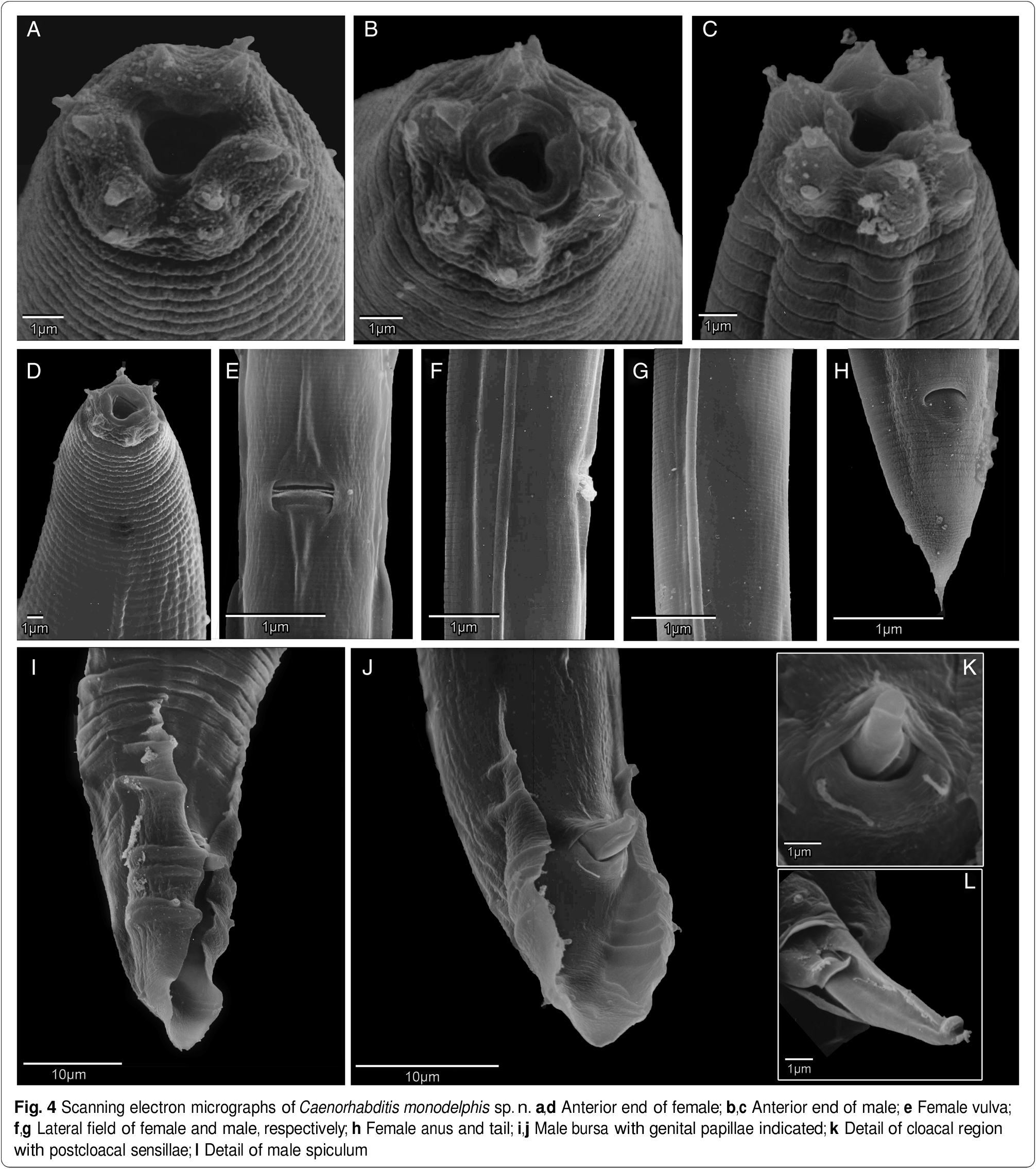 Fig. 6 Phylogenetic relationships of Caenorhabditis species and two outgroup species.Maximum-likelihood based tree from RAxML.Bootstrap support values (1000 replicates) were 100 all branches,unless noted otherwise as numbers on branches.Bayesian Posterior Probabilities were 1 for all branches and are not shown.Coloured boxes indicate supergroups,as defined in [3]. Strain names from which protein sequence were derived are noted