Parasiro coiffaiti   was described based on an unspecified series of specimens collected by M. H. Coiffait in the Pyrénées-Orientales ( France) and Girona Province ( Spain) ( Juberthie, 1956). The species is endemic to the north-east Iberian Peninsula (provinces of Girona and Barcelona) and south-east of France (Pyrénées-Orientales) ( Juberthie, 1957, 1958; Rambla, 1974, 1986), with a relatively broad distribution. Parasiro coiffaiti   is found on the slopes of the Eastern Pyrenees, Montnegre, Montseny (a mountain range west of the coastal hills north of Barcelona), and Collserola (the mountain that delimits the city of Barcelona in the west) ( Rambla, 1974, 1986; Rambla & Fontarnau, 1985). It preferentially inhabits argillaceous soils or slate, and has also been found in two caves in Tavertet (Osona) and Parc Natural de Sant Llorenç del Munt i Serra de l’Obac (Rambla, 1986). The type material (five males and two females), deposited at the Muséum national d’Histoire naturelle, Paris (MNHN), is supposedly from the Girona Province (Catalonia, Spain), but we were unable to locate the labelled locality ‘Porto de Santigoso’ in Girona, and rather than Catalan, the locality name looks Galician or Portuguese. Santigoso is indeed a rural town in the Galician Province of Ourense, in north-western Spain. Interestingly, most of the remaining Iberian diversity of Cyphophthalmi is in Galicia, and we suspect that the type locality of ‘Porto de Santigoso’ may be a labelling error. Juberthie could not have mistaken Parasiro coiffaiti   for any of the Galician or Portuguese species, and therefore we suspect that the labelling error did not affect the specimens contained in the vial. A male from this vial has been designated as the lectotype here, and is illustrated in Figure 2 View Figure 2 ; the remaining four males and two females are designated as paralectotypes. Some of the historical collections that were examined by the authors include the following localities: Olot, Riells, Terrassa, Tavertet (Cova Vora Fosca), and Sant Feliu de Pallerols, all of which are in Catalonia. 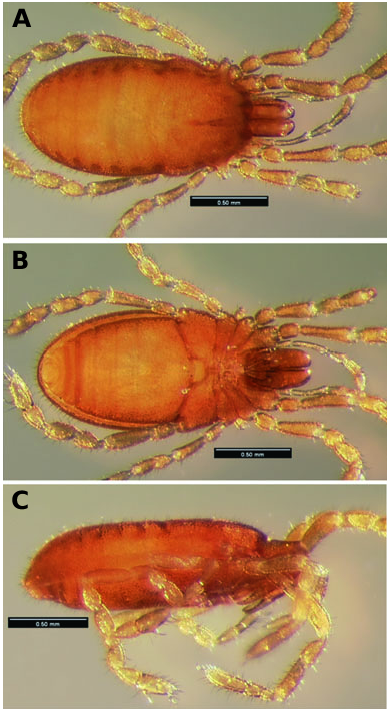