Homalium tenue Wassel & Appleq. differs f rom H. antilahimenae Wassel & Appleq. in having usually narrower leaves with shorter petioles, racemose (to racemiform) inflorescences with rachis not densely pubescent and bracts not pubescent on most of surface, and smaller flowers with sepals adaxially glabrous.

Wood is used for construction (Ludovic 1074).

Distribution, ecology and conservation status. – Homalium tenue is found in low-elevation forests in the southeastern regions of Anosy and Atsimo-Atsinanana; it is reported on sand and laterite. Although the localities in Anosy are variously described, all come from a single small region, so that not more than five distinct subpopulations are known. The Extent of Occurrence and Area of Occupancy are calculated including an unusual collection that may be of hybrid origin (Service Forestier 23622, discussed below) on the grounds that if it is a hybrid, the parental species is likely also to be present in the forest in question. The Extent of Occurrence (EOO) is calculated as c. 908 km ² and the Area of Occupancy as 28 km ². Habitat is largely unprotected and because low-elevation forest is easily accessed, it is very vulnerable to anthropogenic damage from wood harvest and forest clearing. A preliminary assessment of its conservation status is therefore “Endangered” [EN B1ab(iii)+2ab(iii)].

Notes. – Homalium tenue overlaps in distribution with H. nudiflorum , which has sometimes similar leaves. Homalium tenue differs in the denser indument on the petals and calyx cup, usually extending to the basal medial portion of the sepals, and its flowers are smaller; its slender twigs and inflorescences give it a more delicate appearance than H. nudiflorum , though it is reportedly a sometimes large tree. The leaves are usually quite small (the inclusion of Service Forestier 23622, which in most other features is consistent with the species, significantly increases the leaf size range). Collections from AtsimoAtsinanana have more prominently acuminate and often larger leaves than those from Toliara.

Two other species, H. antilahimenae and H. ciliolatum , have dense pubescence on both petals and portions of the calyx; these two and H. tenue are suspected to be a natural group. Those two species have at least some indument on both sepal surfaces, with longer indument on the calyx cup, and their flowers are larger at maturity; they lack the gracile appearance of H. tenue . Homalium ciliolatum , which overlaps in geographic range, has usually larger and broader leaves, flowers usually borne in pairs, and large pubescent bracts and bracteoles; the calyx cup is long-sericeous and the sepals pubescent throughout on both surfaces. Homalium antilahimenae is native to northern Madagascar and has often larger leaves with some marginal glands, often densely pubescent rachises, and bracts and bracteoles often pubescent throughout.

Hybridization between Homalium tenue and H. louvelianum has been observed (see under the latter species above). 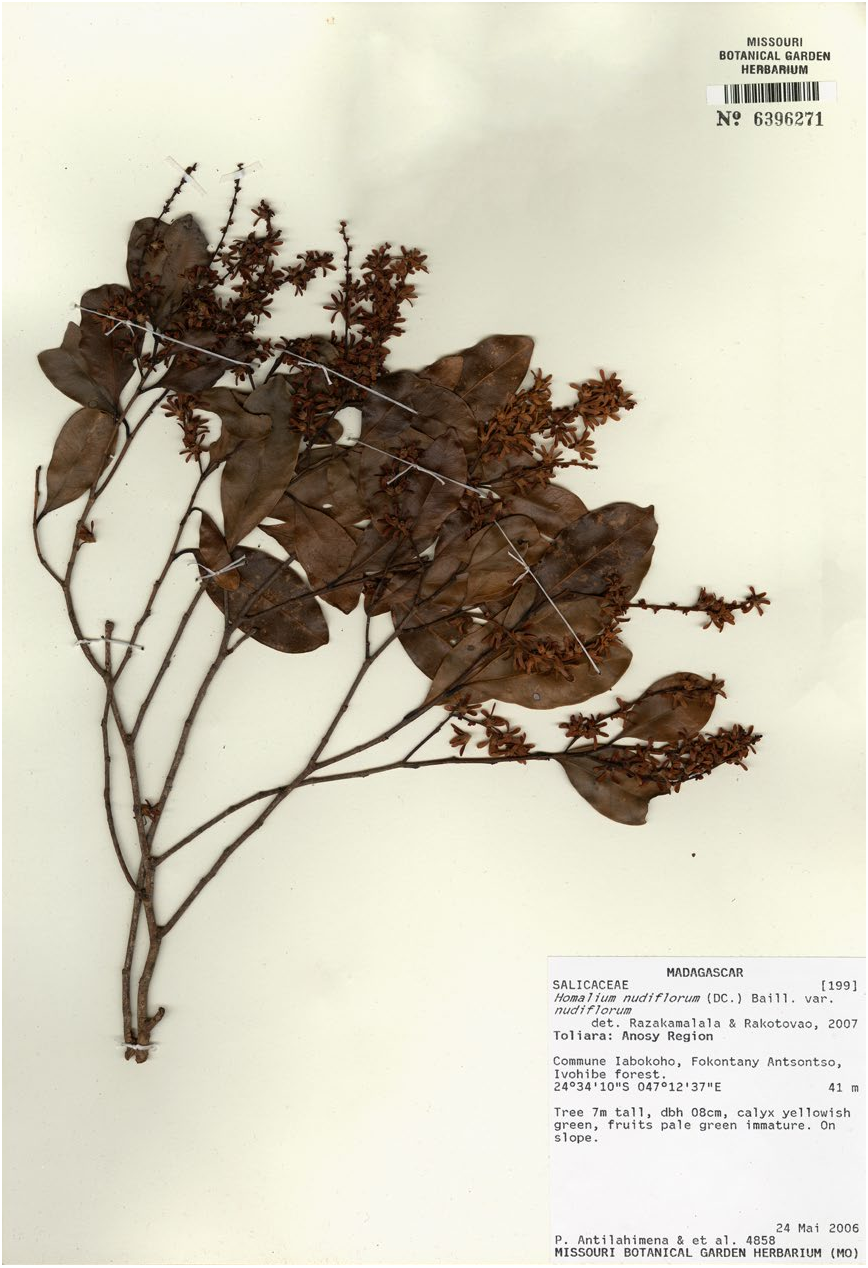