Diagnosis. A black species with dark grey pollinosity and mainly black legs; a pair of longer frontal setae in front of ocellar triangle; antenna yellow in the male and brown in the female; abdomen black with only extreme hind margin of tergites yellow.

Description. Male: Head: frons and gena yellow except for black ocellar triangle and entire occiput; frons longer than broad and narrowing just above antennae where width is about 0.8 that of frons at level of anterior ocellus; gena narrow in front, deeper behind, in profile, below middle of eye, about equal to 0.25 height of eye, with several glistening pale setulae; occiput in profile broadly visible behind eye, with postocular setulae irregularly in one row, black in dorsal 1/3 and pale below; mouth parts all yellow; 2 vibrissal setulae moderately developed; face short, poorly sclerotized and depressed; median carina distinct and yellow; antenna yellow, pedicel paler than postpedicel with distinct short seta dorsally; postpedicel with fine but distinct pubescence along anterior margin longer than diameter of basal segment of arista; 1st segment of arista clear yellow, second brown, with fine pubescence; chaetotaxy: 4 short orbitals, with the anterior one only as long as the short frontal setulae; postverticals short and crossed; 1 medial vertical and 1 lateral vertical; ocellars short, about as long as ocellar triangle, proclinate and parallel; about 14 short setulae across middle of frons with another pair longer than these situated in front of ocellar triangle.

Wing: veins brown; distance on costa between R2+3 and R4+5 about 0.5 that between R4+5 and M; distance between cross veins about 1.3 length of posterior cross vein, which lies slightly oblique and is about 0.4 length of apical section of vein Cu. Haltere pale yellow.

Legs: femora black except for extreme base and apex; fore and mid tibiae yellow with black over a little more than their middle 1/3; hind tibia black except for narrow yellow ring at base and apex; numerous pale setulae scattered on all pairs of legs, in addition longer setulae present on fore femur; apico-ventral seta on mid tibia black; tarsomeres 3 to 5 on fore and mid leg brown, on hind leg all tarsomeres brown; claws black, pulvilli normal; hind trochanter not modified.

Female: as male except for secondary sexual characters of postabdomen; postpedicel dark brown and frons brown over posterior half.

Variation. In this small series there is very little variation other than the extent of brown on the posterior half of the frons in the females and the black forward extension onto the orbits from the occiput, which in some specimens reaches over the two posterior orbital setae.

Etymology. The species epithet refers to the extensive black colouration of the legs.

Similar species. The new species belongs to the A. nigrum Ebejer, 1998   group where they are characterized by 1) the extensive black colouration with dark grey pollinosity (as opposed to another species group that has a lustrous thorax), 2) a pair of setae/setulae in front of the ocellar triangle that are distinctly longer than the other frontal setae, 3) females generally with dark brown antennae, 4) males with long, narrow black postgonites. A. nigripes   is immediately recognized by its extensively dark legs. Two other species have black markings on the legs: A. annulatum Lyneborg, 1973   , known from North Africa and Spain has dark rings on the apical half of the femora and on the middle of the basal 1/3 and the middle of the apical 1/3 of the tibiae; A. brunnipes Ebejer, 1996   , described from Oman, has dark markings as in A. nigripes   but less extensively so; it also has a distinct dark fascia across the middle of the frons; A. brunnipes   and A. nigripes   are more easily separable on examination of the male postabdomen. 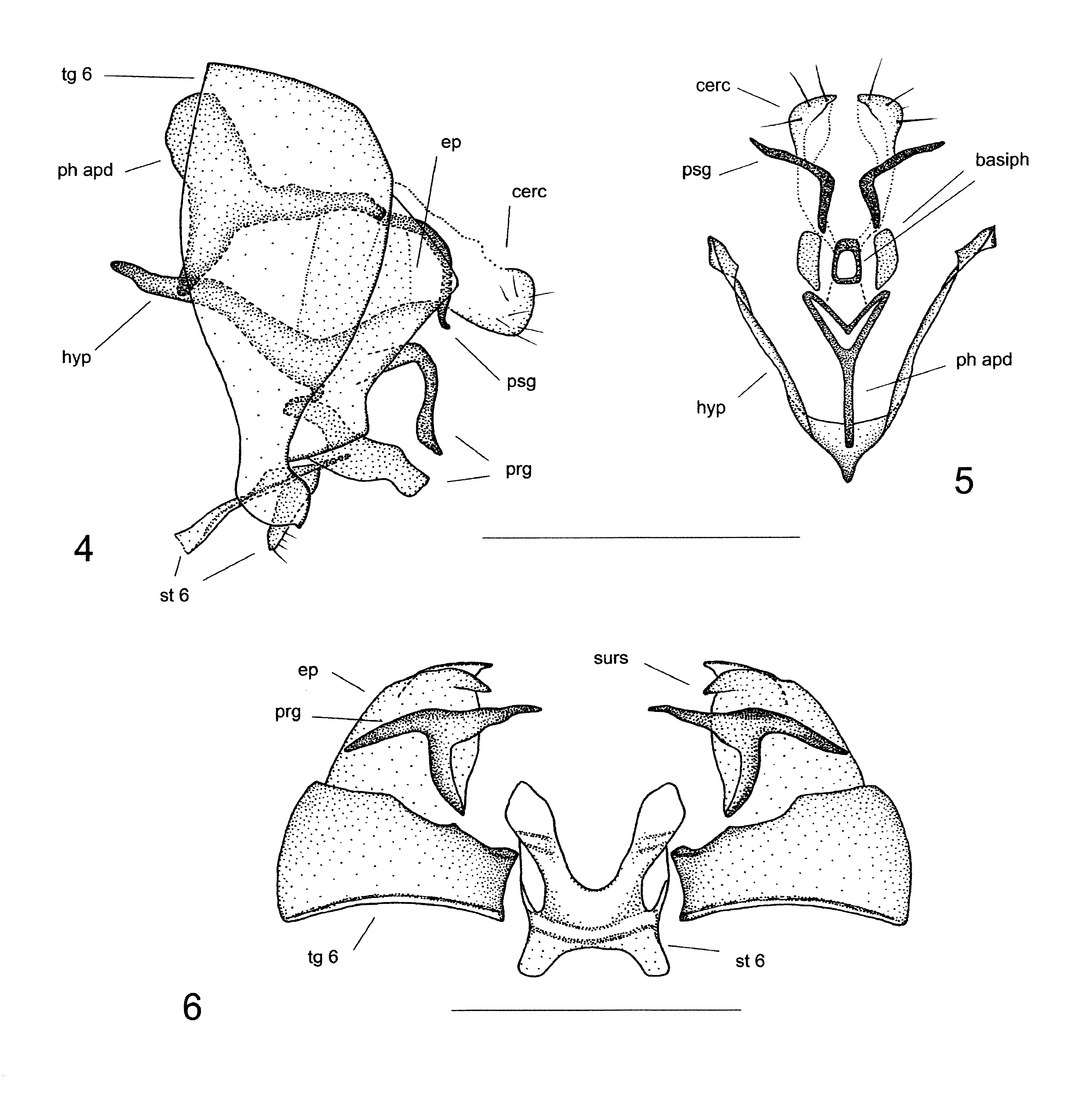