Description. Male: Head: all yellow except for black ocellar triangle and occiput; frons as broad as long, narrowed anteriorly, at level of antennae 0.5 width that at level of anterior ocellus; gena narrow in front, deeper behind, in profile, below middle of eye, about equal to 0.2 height of round eye, with numerous white setulae; occiput in profile barely visible behind eye, with postocular setulae irregularly in one row, black dorsally and yellow ventrally; mouth parts all yellow; 1 short vibrissal setula poorly differentiated from buccal row of setulae; face short and narrow, depressed and poorly sclerotized; median carina very narrow and visible only below lunule between antennal bases; antenna yellow, pedicel with distinct short seta dorsally; postpedicel with fine pubescence along anterior margin shorter than diameter of basal segment of arista; 1st segment of arista yellow only at base, otherwise brown as second segment, with fine pubescence; chaetotaxy: 2 orbitals as long as ocellar triangle and black proclinate ocellars, with 2 short ors setulae in front, postverticals short and crossed; 1 medial vertical and 1 lateral vertical, both strong; about 12 short yellow setulae across middle of frons, all of uniform length.

Wing: veins all pale brown except at extreme wing base where all root veins are pale yellow; distance on costa between R2+3 and R4+5 about 0.6 that between R4+5 and M; distance between cross veins about 1.2 length of posterior cross vein, which lies only slightly oblique and is about 0.25 length of apical section of vein Cu. Haltere creamy white.

Legs: yellow, not modified except for slightly thicker femora; numerous pale setulae scattered on all pairs of legs, in addition longer setulae present on fore femur; apico-ventral seta on mid tibia present; claws black in apical half, short, about half length of tarsomere, pulvilli normal; hind trochanter not modified.

Female: similar to male but antenna all black.

Variation. The dark lateral borders of the scutellum may join across the base of the sclerite, one female has a dark mark across the anterior part of the frons.

Etymology. The species epithet refers to the lustrous thorax

Similar species. A. nitididorsum Ebejer, 2006   , A. nitidum   and an undescribed species from the Middle East form a distinct subgroup within Aphaniosoma   . They are not separable on external characters. The characters they share include the lustrous thorax, pearly white scutellum and propensity for females to have a dark pattern on the frons. They also have a heavily built phallapodeme with large lateral flanges and a large peculiar surstylus. The new species differs from A. nitididorsum   primarily in the very short lobes of the surstylus and the shape of the pregenital sternites. The species from the Middle East requires further study as specimens originate from three countries. These may ultimately show a clinal variation that includes the Moroccan species. 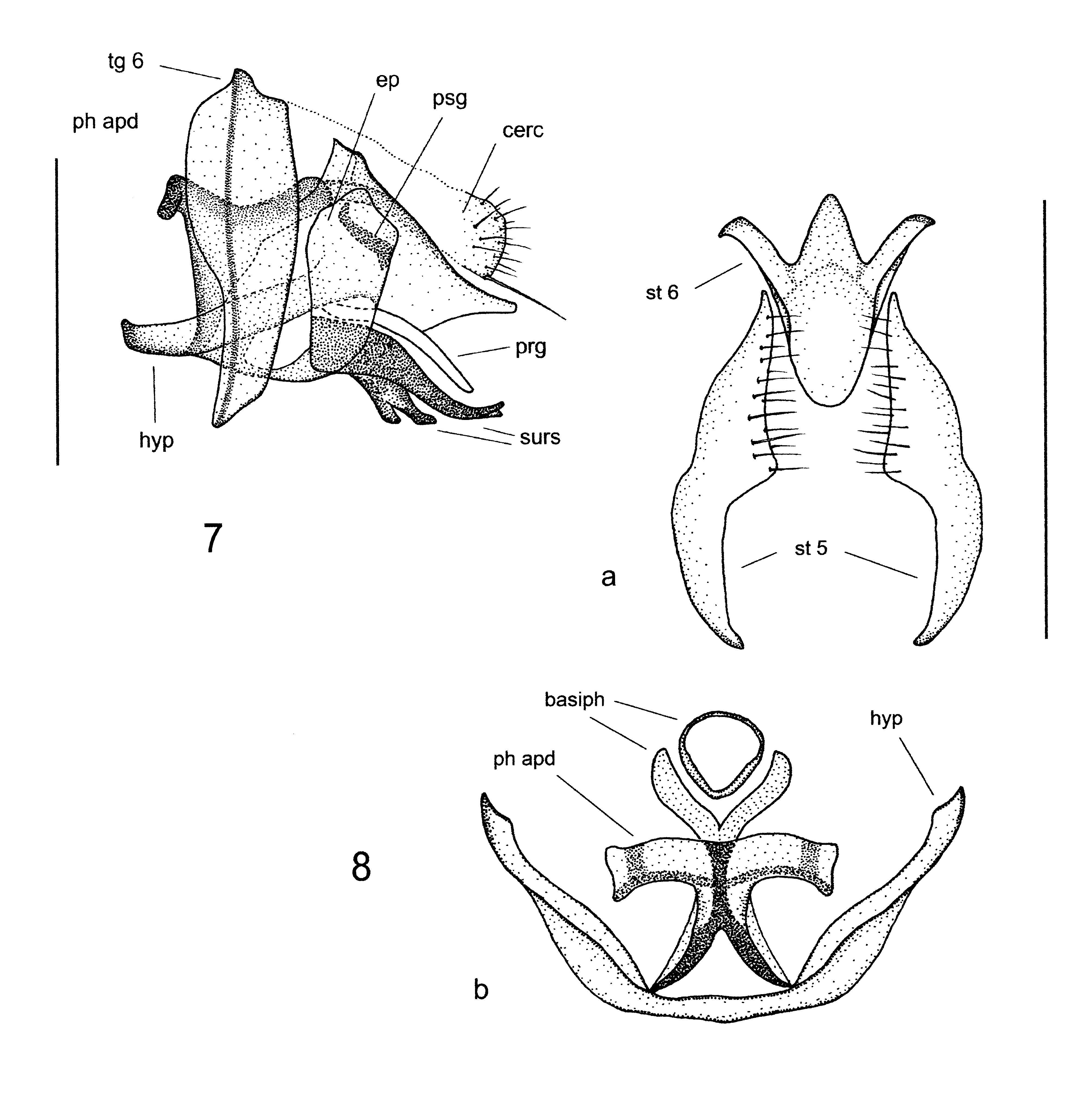