Diagnosis: We had little material available for the diagnosis of the new species Trogon muriciensis , particularly regarding external morphology, so caution must be taken until more information is collected. For comparison of plumage coloration and barred patterning, only the holotype was available. For morphometric traits, in addition to the holotype, we had measurements from the paratype and a ringed individual. For other discrete traits, we had photos from online depositories, in addition to those of the holotype (Supporting Information, Fig. S 8) and ringed individual. For the song, we had slightly more material, with recordings from five separate individuals (including the holotype).

Males: Trogon muriciensis can be distinguished from all other species of trogons, besides T. rufus , T. chrysochloros , T. tenellus and T. cupreicauda , by the combination of the green head and citrus-yellow belly. Light-blue eye-ring is diagnostic against T. r. sulphureus , T. r. amazonicus and T. cupreicauda . Breast band absent, unlike most T. chrysochloros , T. rufus , T. tenellus and T. cupreicauda . The dense barring and narrow white bars on the undertail of the holotype are diagnostic against individuals of all taxa besides T. chrysochloros , whilst the dense barring and narrow white bars on the wing panel are diagnostic against all besides T. chrysochloros and T. r. rufus . Nevertheless, compared to T. chrysochloros , several subtle differences are present. Morphometrically, it has a smaller body size and variably serrated bill (vs. highly serrated), whilst the holotype has a greener uppertail hue and undertail with narrower black bars and lower percentage area black compared to almost all specimens of T. chrysochloros examined. Compared to T. r. rufus , the body mass appears slightly greater, whilst the holotype had denser undertail barring with narrower white bars than all individuals of T. r. rufus examined. Against T. r. sulphureus and T. r. amazonicus , the holotype had a consistently greener uppertail hue, greater barring density and narrower white bars on the undertail and wing panel barring, and greater body mass. Compared to T. cupreicauda , the undertail barring is also much denser with narrower white bars, the wing panel barring is denser and uppertail hue lower. Compared to T. tenellus , the uppertail hue is greener and the undertail barring much denser with narrower black and white bars. Female: unknown.

Distribution and habitat: Only known from Estação Ecológica de Murici, Alagoas, Brazil, at just over 500 m elevation, where it occurs in mid-levels of the montane Atlantic Forest. It was presumably once more widespread throughout this habitat in the Pernambuco Centre of Endemism before the deforestation of the region.

Variation in type material: The immature nature of the paratype makes it difficult to determine whether variation between it and the holotype are due to age or intrapopulational variation. The upperparts of the paratype present a strongly coppery head and mantle, golden-green rump, predominantly brown upperchest with golden-green feathers, and reddish-brown uppertail (central rectrices). The brown rectrices and chest feathers represent an individual that has undergone second prebasic molt and not yet obtained fully formative plumage (Ryder & Wolfe, 2009). Therefore, whether the warmer hues of the upperparts, compared to the holotype, are related to its age is unclear, although past research has not found changes in the tonality of structural colours with age (Prum, 2006). It is similar to the warmer hued upperparts of T. chrysochloros individuals found below 500 m a.s.l., which are likely controlled by humidity, but this is unlikely the case in this instance since both type specimens originate from the same area, just above 500 m a.s.l. and the holotype has plumage with cooler hues, consistent with the higher elevation and humidity of Murici. In terms of the barred patterning, the paratype differs from the holotype in undertail barring by having substantially broader black (2.23 mm) and white bars (2.17 mm) and lower bar density (4.65 bars/ cm), but a similar percentage area black (50%). This is much more akin to T. r. sulphureus . However, the more pointed tips of these rectrices suggest they are immature, whilst the similarly lower density of the undertail barring on immatures of other species in the complex suggest this is also the result of age. In terms of the wing panel barring, compared to the holotype, the paratype had narrower black bars (0.23 mm) and white bars (0.33 mm) and a lower percentage area black (41%) but similar bar density (14.5 bars/ cm). This is more similar to T. chrysochloros and may represent the affinity between the two species. However, the brown in the wing coverts feathers suggest they are not mature, so this variation may also be due to age. In terms of morphometrics, although body mass provides a consistent means of comparison, the variability of other measurements between type specimens is likely the result of observer bias. For discrete characters, the faded underparts of the paratype make it difficult to ascertain the presence of a breast band but the absence of pure white feathers in the area, adjacent the upperchest, suggest it is absent, as in the holotype. The bareparts’ colours are also consistent with the holotype, with the eye ring noted as blue and the tarsus grey.

Etymology: The name refers to the only remaining locality where this taxon is known to occur (Estação Ecológica de Murici, Alagoas state, Brazil), to draw attention to the critical level of biodiversity loss in the region and dire need for conservation.

Remarks: Despite the scarcity of material, we were able to diagnose Trogon muriciensis as exhibiting a unique combination of features typical of, or intermediate to, either T. chrysochloros in the southern Atlantic Forest or one of the T. rufus subspecies in Amazonia. The plumage patterning most resembled T. chrysochloros with a shiny green uppertail towards the end of the range for T. chrysochloros , blue eyering and dense undertail and wing panel barring with similarly narrow white bars, which is unsurprising given that they are sister-species, according to the mtDNA. Nevertheless, subtle differences are present between the holotype and all examined specimens of T. chrysochloros , namely, in the slightly narrower black bar widths and lower percentage area black on the undertail. Unlike most T. chrysochloros , however, it lacked a breast band, which is more typical of T.r.sulphureus and T. r. amazonicus . On the other hand, the body mass is intermediate between T. chrysochloros and T. rufus subspecies, whilst tail and wing lengths are shorter than T. chrysochloros but consistent with T. rufus subspecies. The degree of bill serration is also intermediate between these taxa and may indicate an omnivorous diet, as is typical of all taxa besides T. chrysochloros , which prefers large arthropods and seems likely the reason for its more serrated bill. This is further supported by the presence of both fruit and insect remains in the stomach contents of the holotype and suggest that the ecological niche it occupies is different to that occupied by T. chrysochloros . In contrast, the song is different from T. chrysochloros , with fewer notes per phrase, slower pace, longer note durations, longer pause following introductory note and generally lower note frequencies. However, it was similar to T. rufus subspecies, especially T. r. sulphureus , with only slightly more notes per phrase overall. The introductory note and loudsong bandwidths also appear to be generally wider than in all other taxa, besides T. chrysochloros . Nevertheless, these differences require confirmation with further sampling.

This combination of characters, typical of related Atlantic Forest and Amazonian species, is unsurprising when one considers that the Pernambuco Centre of Endemism was once at the centre of biotic interchange between these regions during the Plio-Pleistocene ( Costa, 2003; Batalha-Filho et al., 2013). In fact, there are 42 other cryptic endemic species and subspecies known from this region with affinities to either the Atlantic Forest or Amazonia (Teixeira & Gonzaga, 1983, 1985; Da Silva et al., 2002; Silveira et al., 2003; Barnett & Buzzetti, 2014; Tello et al., 2014; Thom & Aleixo, 2015; Bocalini et al., 2020).

The conservation status of this population is worrisome with all records originating from only a single locality. During our fieldwork in 2019, we were able to detect only about 20 individuals, and explicitly avoided collecting more than one specimen. We, therefore, recommend that it be listed as Critically Endangered ( IUCN, 2012) as <30 km 2 of the forest remains at this site (criterion B 1), mostly in small fragments and not all suitable for this species. It can also be inferred to have suffered a population reduction of ≥ 90% (criterion A 1) given the> 98% loss of forest cover in NE Brazil, which still continues (Silveira et al., 2003; Trindade et al., 2008). In fact, based on the population density of T. r. rufus – three pairs/km 2 (Thiollay, 1994) – and the remaining forest area, an optimistic estimation of the maximum population size is around 90 pairs (criterion C). However, given the continued reduction in forest cover, fragmentation, edge effect and secondarization of the old growth forest (Ranta et al., 1998; Silveira et al., 2003; Trindade et al., 2008; Pereira et al., 2014), the actual figure is likely much lower with recent searches having repeatedly failed to locate it at any other fragments in the region ( LFS per. obs.). It is, therefore, the most threatened trogon in the world, followed by the vulnerable ( VU) Javan trogon, Apalharpactes reinwardtii (Temminck, 1822) , with eight other species currently considered globally near-threatened ( IUCN, 2018).

The conservation importance of this region is well known as it contains more globally threatened species than anywhere else in the Americas (Wege & Adrian, 1995; Stattersfield et al. 1998; Silveira et al., 2003; Pereira et al., 2014). This is primarily the direct result of pervasive habitat loss and degradation within the Pernambuco Centre of Endemism ( Pereira et al., 2014), which have already led to the recent extinction of other PCE endemics, namely Cichlocolaptes mazarbarnetti Mazar Barnett & Buzzetti, 2014 , Glaucidium mooreorum da Silva, Coelho & Pedreira, 2002 and Philydor novaesi Teixeira & Gonzaga, 1983 , representing the first modern bird extinctions for Brazil ( Pereira et al., 2014; Butchart et al., 2018; ICMBio, 2018). Urgent actions are, therefore, required to prevent further losses in the region. Namely, the consolidation of existing forest fragments into larger continuous blocks and conferring legal protection to large, existing patches of forest that remain unprotected, including Murici, as recommended by Pereira et al. (2014). Furthermore, we recommend a captive breeding programme based on the knowledge and experience acquired from successfully hatching and raising other species of Trogons in captivity to save the last remaining individuals of Trogon muriciensis . 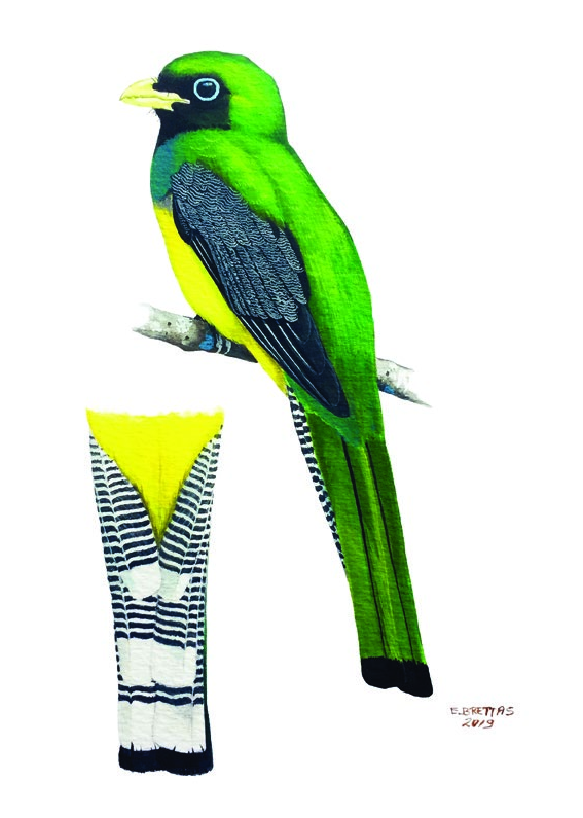