Diagnosis. Argyrogrammana gallardi sp. nov. can be distinguished from all species belonging to the “ amalfreda complex” by combination of the following characters: forewing with apex pointed; forewing upperside with light blue subapical patch in R 4 –M 3 thin and reduced in R 4 –M 1, ground color orange, covering a large portion of the wing and with black spots in 2 A-anal margin; hind wing apex rounded; hind wing upperside almost totally orange, with innumerous thin black spots; male genitalia with triangular valvae and a membranous area at the middle; distal margin of the uncus straight with a short median indentation.

Hind wing upperside: apex rounded; ground color orange; discal and basal areas with a tiny black spot on CuA 1 –CuA 2 and two larger spots on CuA 2 – 2 A; discal cell with two black spots and a thin line at the end of the cell; postdiscal band with black spots on Rs–M 1, M 2 –M 3, M 3 –CuA 1 and CuA 2 – 2 A; submarginal band bordered by thin black lines; two additional submarginal black lines proximal to the silvery-blue submarginal, from costa to the anal margin, both broken on the veins; thin silvery-blue submarginal line broken on the veins, more conspicuous than those of the forewing; fringe orange and black.

Genitalia: tegumen dorsally squared and laterally triangular; distal margin of the tegumen with a slightly median indentation; lateral membranous areas between the tegumen and the uncus triangular; tegumen ventral arms evenly narrow fusing with saccus dorsal arms, it also evenly narrow; anterior projection of the saccus longer than tegumen, proximally thinned; uncus as long as tegumen, distal margin with a short median indentation; gnathos “C” shaped, hooked at the tip; valvae triangular, with a rounded dorsal projection and a median membranous area; aedeagus thick, three and a half times longer than valvae, and with innumerous thin and long cornuti.

Hind wing underside: ground color distally orange and proximally yellow; black spots as in upperside, but larger; large submarginal black band from the apex to the tornus, broken on the veins; silvery-blue submarginal line absent; fringe as in upperside.

Etymology. This new species is named after Jean-Yves Gallard, in recognition of his contribution in the taxonomy of the Riodinidae from French Guiana.

Distribution. This uncommon species is currently known only from two males collected in the north region of the PNSD, northwest of Acre, on the border between Brazil and Peru, and from a paratype collected near to Régina, Cayenne , French Guiana.

Comments. Brévignon & Gallard (1995: 404, 405: fig. 11) illustrate a male and a female specimen, therein identified as A. amalfreda (Staudinger, [1887]). As noted by Hall & Willmott (1995), the male specimen differs significantly from Staudinger’s [1887] type. The male specimen in fact represents a new species, here described as A. gallardi sp. nov. The female specimen illustrated by Brévignon & Gallard (1995: 394) is apparently nonconspecific with the male. The female collected in 2011 at the same day and near the place where the male paratype from PNSD was collected is here tentatively matched with this species due to its black spots pattern of both wings similar to males. Nevertheless, considering the great dimorphism found in almost all species of the genus and that some Argyrogrammana species are known only from one of the sexes, we chose a conservative action do not including this female in the type series of A. gallardi sp. nov.. Despite the spots pattern on the wings, similar to species from “ stilbe complex”, its genitalia morphology ( Fig. 63 View FIGURES 63 – 66 ) has several differential features of those females belonging to “ stilbe complex” found at the PNSD ( Figs 64–66 View FIGURES 63 – 66 ), as the rounded lamella ante and postvaginalis and signa widely nonaligned. 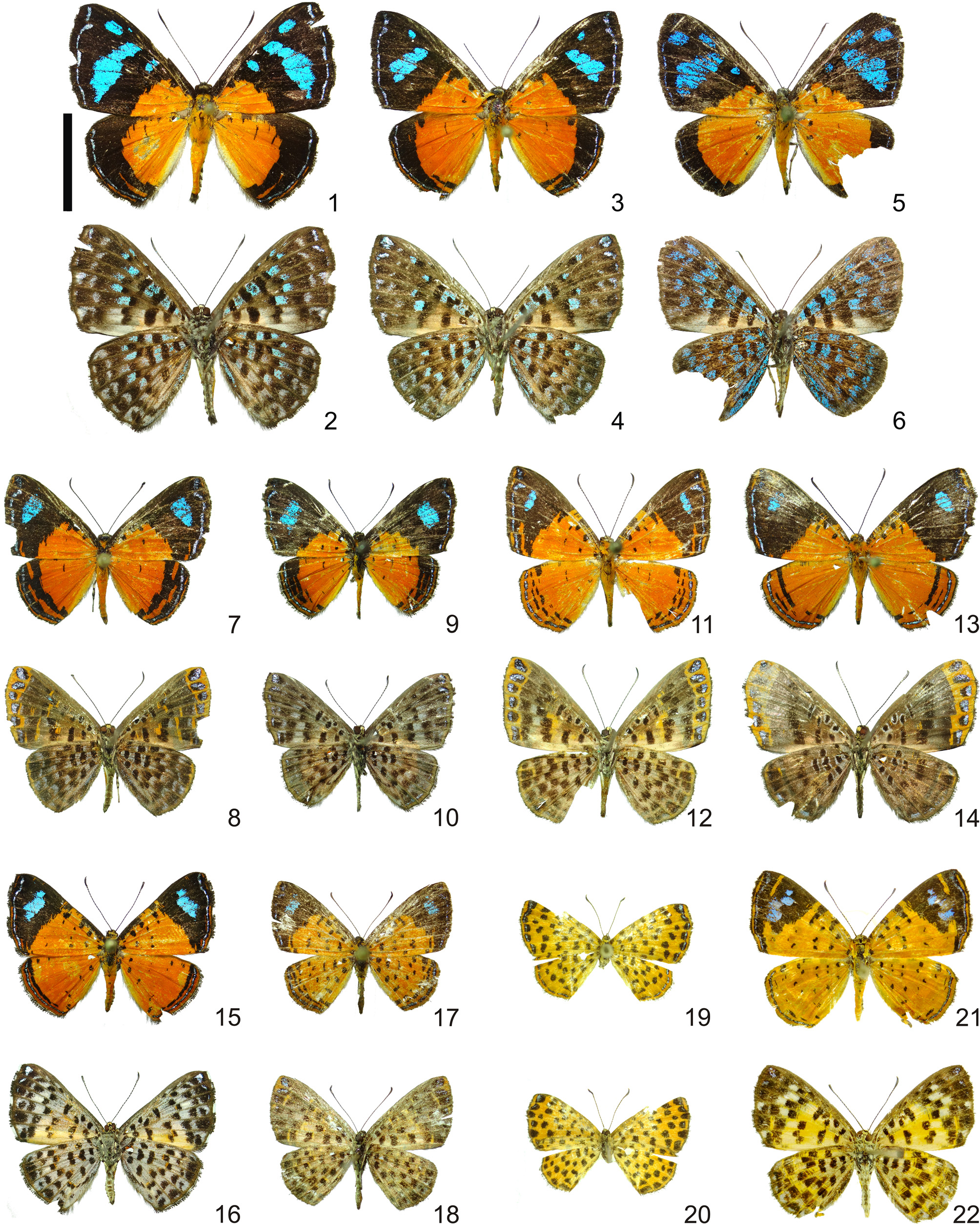 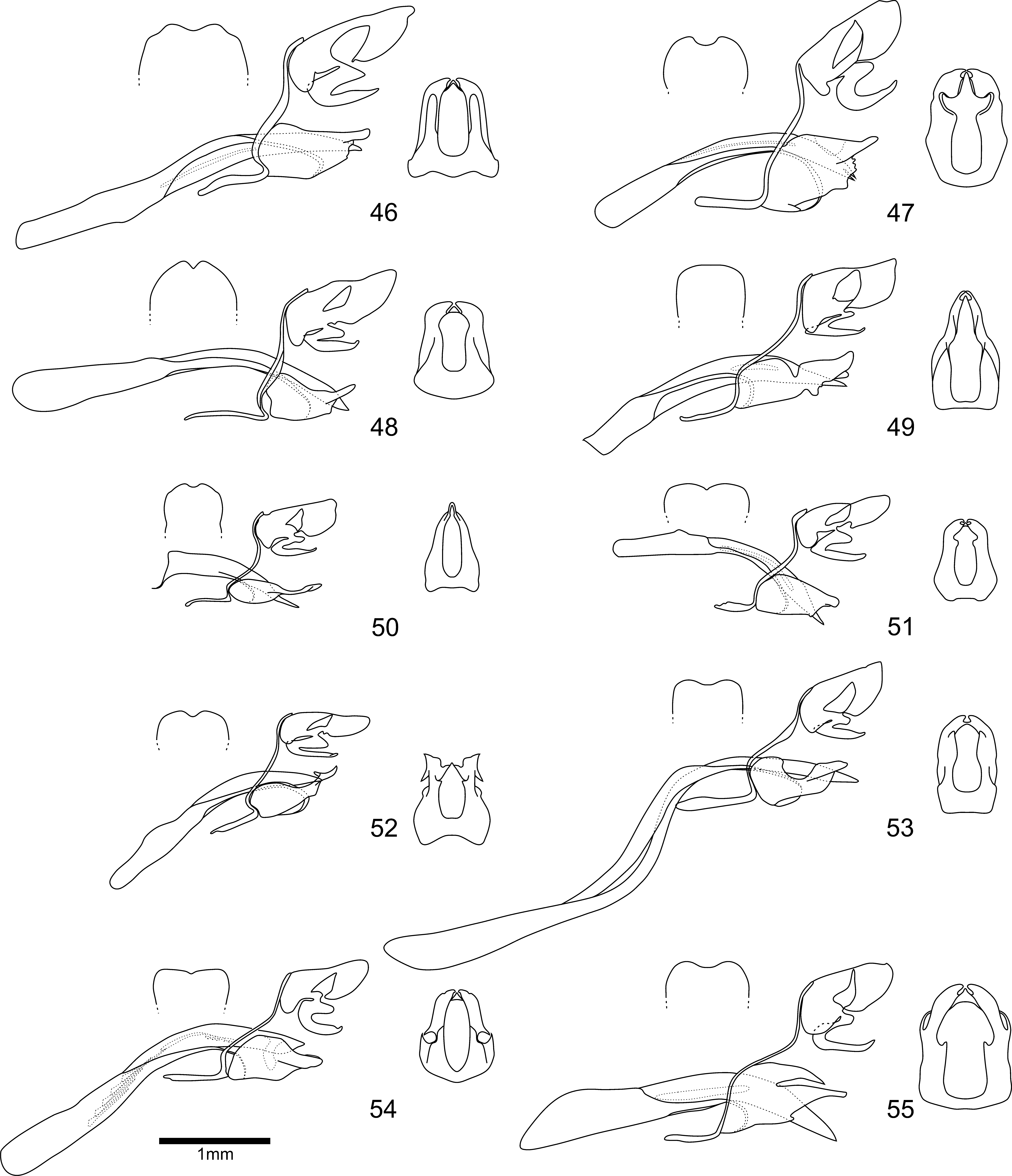