Woody lianas or climbing shrubs, apparently rather extensively twining, climbing to at least 6 m high; stems densely puberulous, rounded, with principal stems elongated and mostly leafless, with leaves and flowers mostly borne on shorter lateral stems. Leaves opposite or rarely ternate; blades elliptic to broadly elliptic or ovate, 0.5-1.2 × 0.3-1 cm, at base cuneate to obtuse, at apex obtuse to acute or shortly acuminate with tips 1-1.5 mm, drying papery to chartaceous and often rather shiny, glabrous on both surfaces, with margins thinly revolute; secondary veins 3 or 4 pairs, free or sometimes weakly looping to interconnect with each other near margins, adaxially costa plane or prominulous and secondary veins and some tertiary veins thinly prominulous, abaxially costa prominent and secondary veins and some tertiary veins thinly prominulous. Petioles 0.5-1 mm, glabrous to puberulous. Stipules interpetiolar, deciduous below 5 to 8 distalmost nodes, triangular, ca. 1 mm, abaxially densely puberulous, acute. Inflorescences terminal and in axils of uppermost leaves, cymose, cylindrical to rounded in outline, 1-2.5 × 0.8- 2.5 cm (including peduncles), few- to several-flowered (ca. 3 to 15), branched to 1 or 2 orders, with axes cymose, glabrous to puberulous; bracts narrowly triangular, 1-2 mm. Flowers in dichasial to umbelliform groups and all pedicellate on pedicels 1-3 mm, distylous; hypanthium oblate to ellipsoid, 0.3-0.8 mm, glabrous. Calyx limb divided nearly to base, glabrous, lobes 4 to 6, narrowly triangular to deltate or ligulate, 0.3-0.8 mm, acute to rounded, with lobes generally equal or with 1 lobe slightly larger on some flowers. Corolla funnelform to funnelformsalverform, white becoming yellowed with age, externally glabrous, internally moderately to densely pilosulous in throat and upper 1/2 of tube, tube 3-3.5 mm, 1-1.2 mm diam. at base, 1-1.3 mm diam. at top, at base entire (i.e., not fenestrate), lobes 4 to 6, narrowly triangular, 1.5-2 mm, acute and smooth at apex. Stamens 4 to 5, inserted in corolla throat, anthers creamy white, in short-styled flowers ca. 0.8 mm and exserted on filaments 2.5-3 mm, in long-styled flowers ca. 0.8 mm, sessile, and partially exserted. Stigmas 2, linear, in short-styled flowers ca. 1 mm and included, with style ca. 2 mm, in long-styled flowers ca. 2 mm and exserted, with style ca. 5 mm. Capsules subglobose, 1.5-3 mm in diam., stiffly chartaceous to woody, glabrous, dehiscent from apex through top 1/3-1/2 of body, with beak portion flat to rounded. Seeds not seen.

Names. – The scientific name created here for this species refers to the apparently distichous leaf arrangement that is distinctive, as noted below. The vernacular name “Vahimavo” was noted on Rakoto 29, and is probably in the Betsileo dialect. Translated into English this means “yellow liana”.

Habitat and distribution. – This species is documented from humid forests at ca. 850-1300 m in east-central Madagascar, in the provinces of Fianarantsoa, in Ranomafana National Park (Vatovavy-Fitovinany Region), and Toamasina, in the Alaotra-Mangoro Region and in the region of Andasibe/Moramanga ( Fig. 4 View Fig , humid bioclimatic zone).

Conservation status. – Danais disticha   has an EOO of 8609 km 2,which meets the criterion for Vulnerable; an AOO of <500 km 2 which meets the criterion for Endangered; and three subpopulations. The species is known from four collections in three localities, and only one of those falls inside the boundaries of a currently protected area (Ranomafana National Park). The species was collected in a small forest remnant located about six kilometers outside of a second protected area (Analamazoatra Special Reserve) in 1997, so it is possible that extant populations occur within the adjacent Reserve or in the nearly contiguous Mantadia National Park. The habitat of this species is already significantly fragmented and expected to diminish further in quality. Danaisdisticha is assigned a preliminary conservation status of Vulnerable due to its limited distribution and threatened habitat [VUB1ab(i,ii,iii,iv)+2ab (i,ii,iii,iv)].

Notes on morphology, biology and similar species. – Danais disticha   is characterized by its growth pattern, with prolonged and mostly leafless principal stems and shorter lateral stems bearing numerous regularly arranged small leaves; its short triangular stipules; its relatively small inflorescences that are terminal and sometimes also produced in the adjacent uppermost leaf axils; its pedicellate flowers; its calyx and corolla with a variable number of lobes (four to six); and its relatively small capsules. The regularly arranged leaves appear to be at least weakly distichous, even though the leaf arrangement in the genus is basically decussate. Such an arrangement requires twisting of the internodes to alter this decussate arrangement, and is found in some Rubiaceae   . This apparent distichous arrangement may be only an artifact of specimen preparation, and field observations are needed to confirm the morphology of this species.

Only two flowering collections have been seen: one has short-styled flowers (Turk & al. 454) with variously four or five calyx and corolla lobes but consistently five stamens; the other has long-styled flowers (Rakoto 29) with variously four or five calyx and corolla lobes and consistently four stamens. Variation in calyx and corolla lobe number within Danais   species was previously documented by PUFF & BUCHNER (1994). Only two apparently mature capsules have been examined, and no mature seeds of this species were found; however all of the other characters, including the climbing habit, agree with Danais   and this species is therefore included in this genus. Within Danais   , this new species is similar to those included in PUFF & BUCHNER (1994) ’s informal “ Danais microcarpa   group”, in particular D. microcarpa Baker   and D. ligustrifolia Baker   . However this new species differs from these and other species of Danais   in its consistently smaller leaves and characteristic branching arrangement. 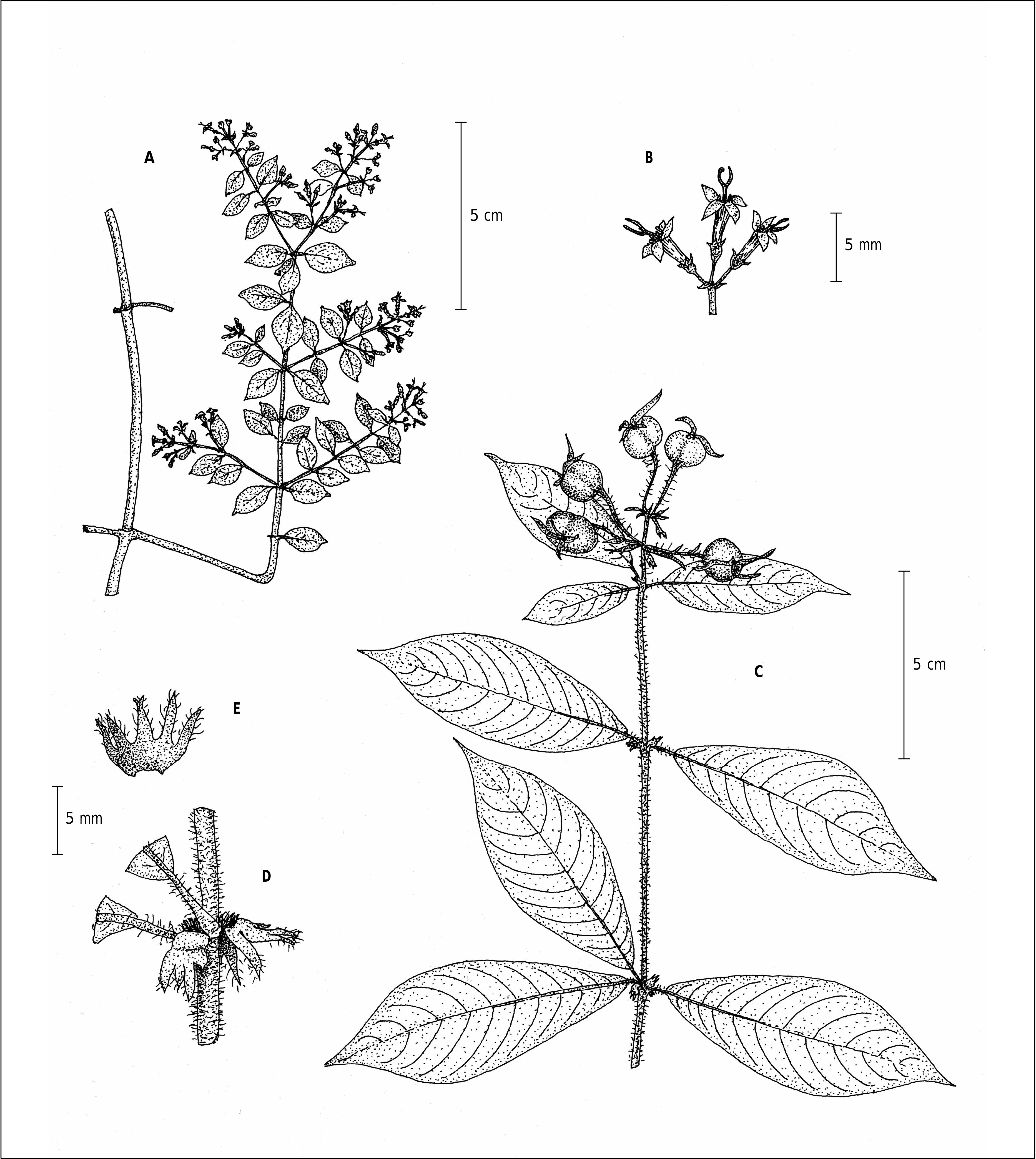 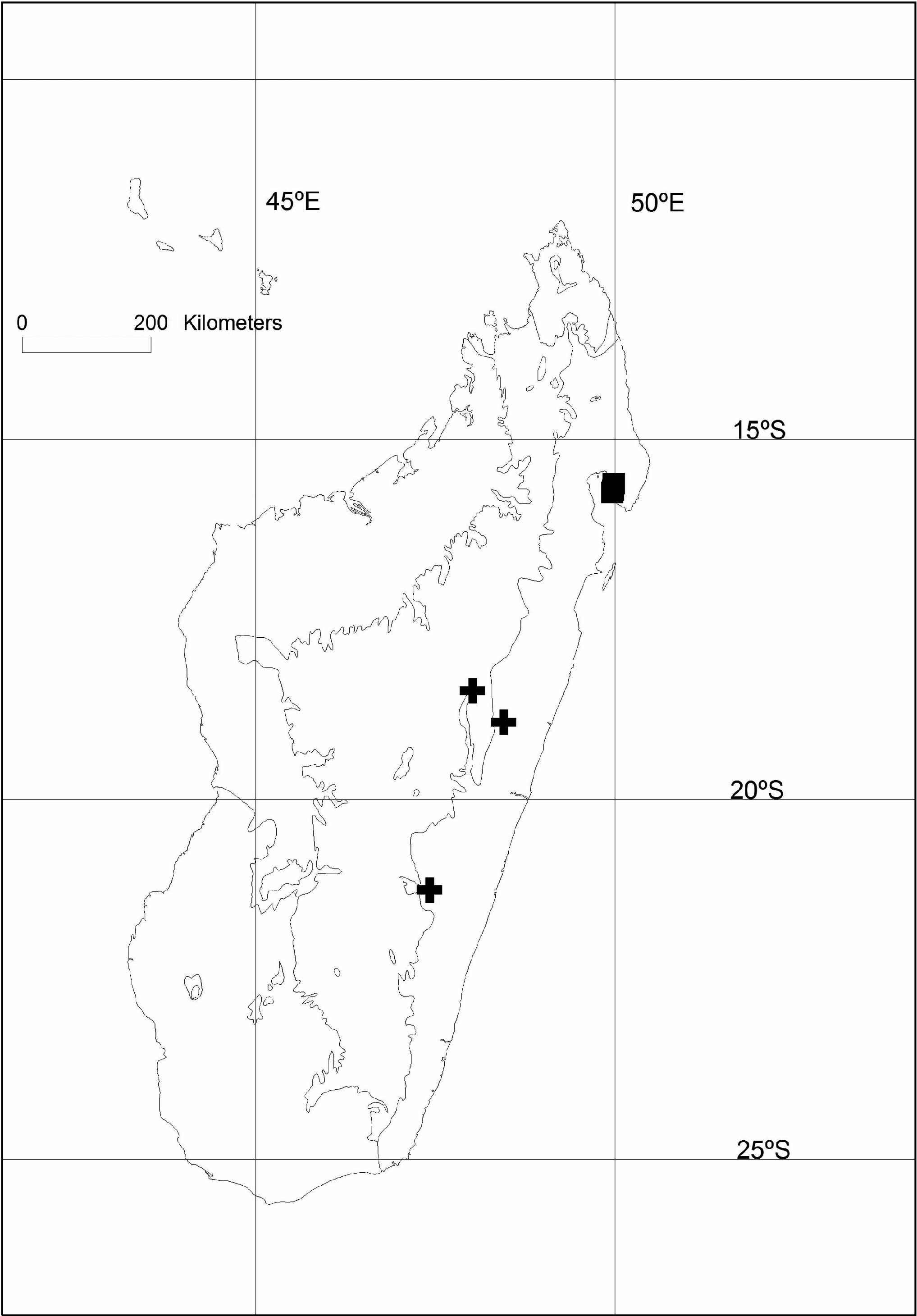