Names. – This species is so far only known from the Masoala Peninsula, and the scientific name created here for it refers to this locality. No vernacular name is noted in the information available.

Habitat and distribution. – This species is documented from humid forests at 0-400 m in eastern Madagascar, on the Masoala Peninsula in Antsiranana Province (SAVA Region) and in Toamasina Province (Analanjirofo Region; Fig. 5 View Fig , humid bioclimatic zone).

Conservation status. –Danaismasoal ana has an EOO of 159 km 2, which meets the criterion for Endangered; an AOO of <500 km 2, which also meets the criterion for Endangered; and three subpopulations. The species is known from four collections in two localities; one locality falls inside the boundaries of one protected area (Masoala National Park). The general habitat of this species is already significantly fragmented and expected to diminish further in quality. Danais masoalana   is assigned a preliminary conservation status of Endangered due to its limited distribution and threatened habitat [EN B1ab(i,ii,iii,iv)+2ab(i,ii,iii,iv)].

Notes on morphology, biology and similar species. – Danais masoalana   is characterized by its relatively large leaves (for Danais   ) with the quaternary venation closely reticulated to form narrowly rectangular areoles on the abaxial surface; its stipules that are shortly united around the stem; its axillary multiflowered inflorescences; its mediumsized orange flowers with the anthers exserted on well developed filaments; and its relatively small fruits usually with a granular surface. Only one flowering collection has been seen, with flowers that resemble the short-styled form of distylous Danais   species.

This new species is similar in general aspect to D.rhamnifolia Baker   , which is found in the same region; however D. rhamnifolia   differs in its usually smaller leaves, with the blades 2-11 × 1-5.5 cm and the petioles 2-17 mm long; its interpetiolar, shorter stipules, 1-2.5 mm long; its usually terminal inflorescences, although these may sometimes also be borne in the uppermost leaf axils; its smaller corollas, with the tube 2.5- 5 mm long and the lobes 1.5-2.5 mm long; and its shorter filaments, 2-4.5 mm long. Danais   masolana is also similar to D. magna Puff & R. Buchner   , which is also found in the same region; however D. magna   differs from this new species in its smaller leaves, 7-11 × 2.5-6 cm, with the densely reticulated tertiary and quaternary venation forming subcircular areoles on the lower surface; its shorter inflorescences, 1-3 cm long, with the flowers all sessile to subsessile and without developed secondary axes; its shorter filaments, 5-6 mm long; and its woody fruits with their bases or their short stipes or pedicels (to ca. 1 mm long) significantly thickened, so the fruits sometimes appear fused together. PUFF & BUCHNER (1994) did not see the fruits of D.magna   , but these have been documented by recent collections (e.g., Antilahimena & al. 1147, MO!, see image at TROPICOS, 2013) and resemble those of D. aurantiaca Homolle.   Danais magna   is also notable for its habit, which was reported by PUFF & BUCHNER (1994) to be a liana climbing 18 m or more into the forest canopy; all the specimens seen of D. masoalana   were gathered from much smaller plants. 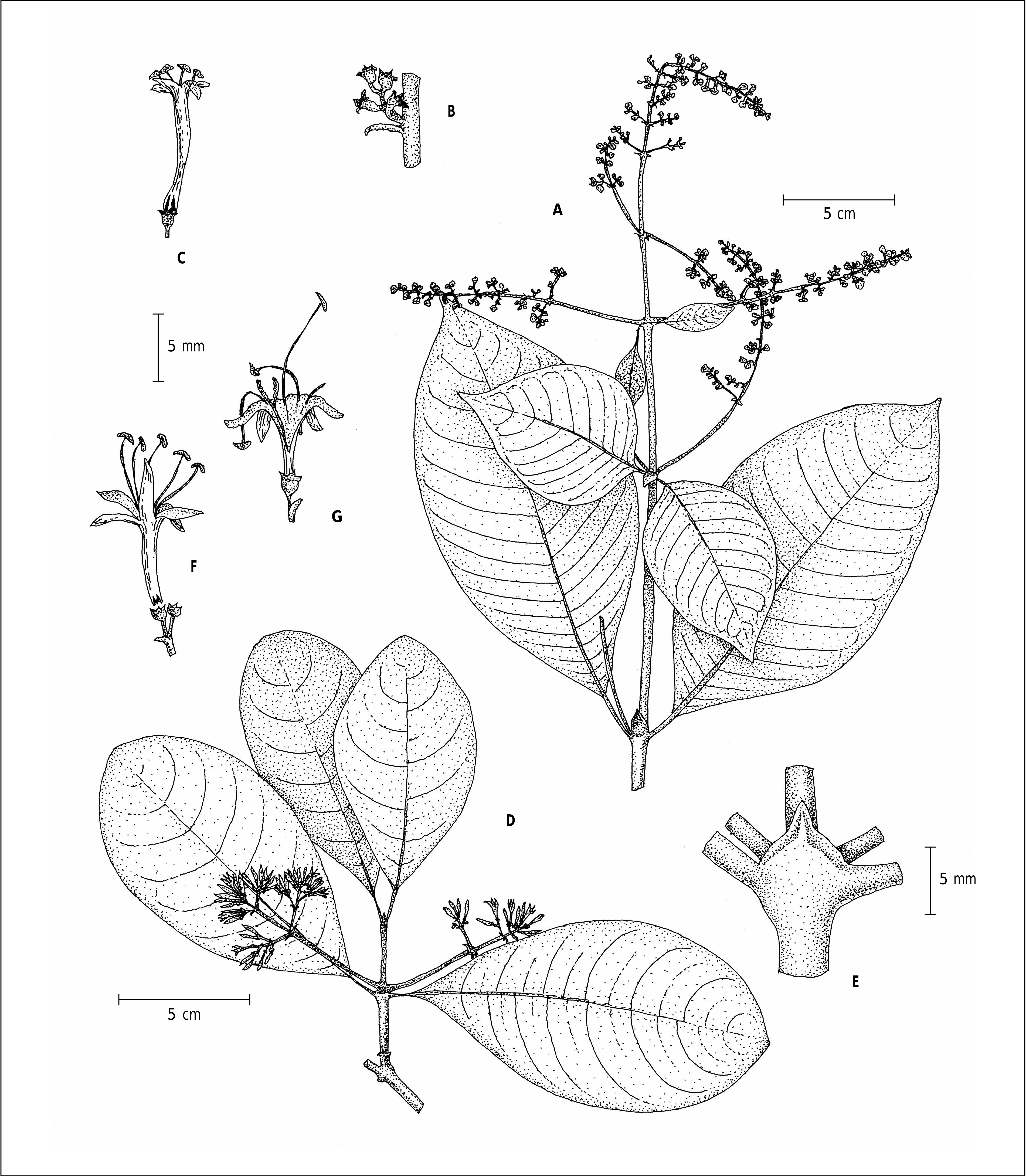 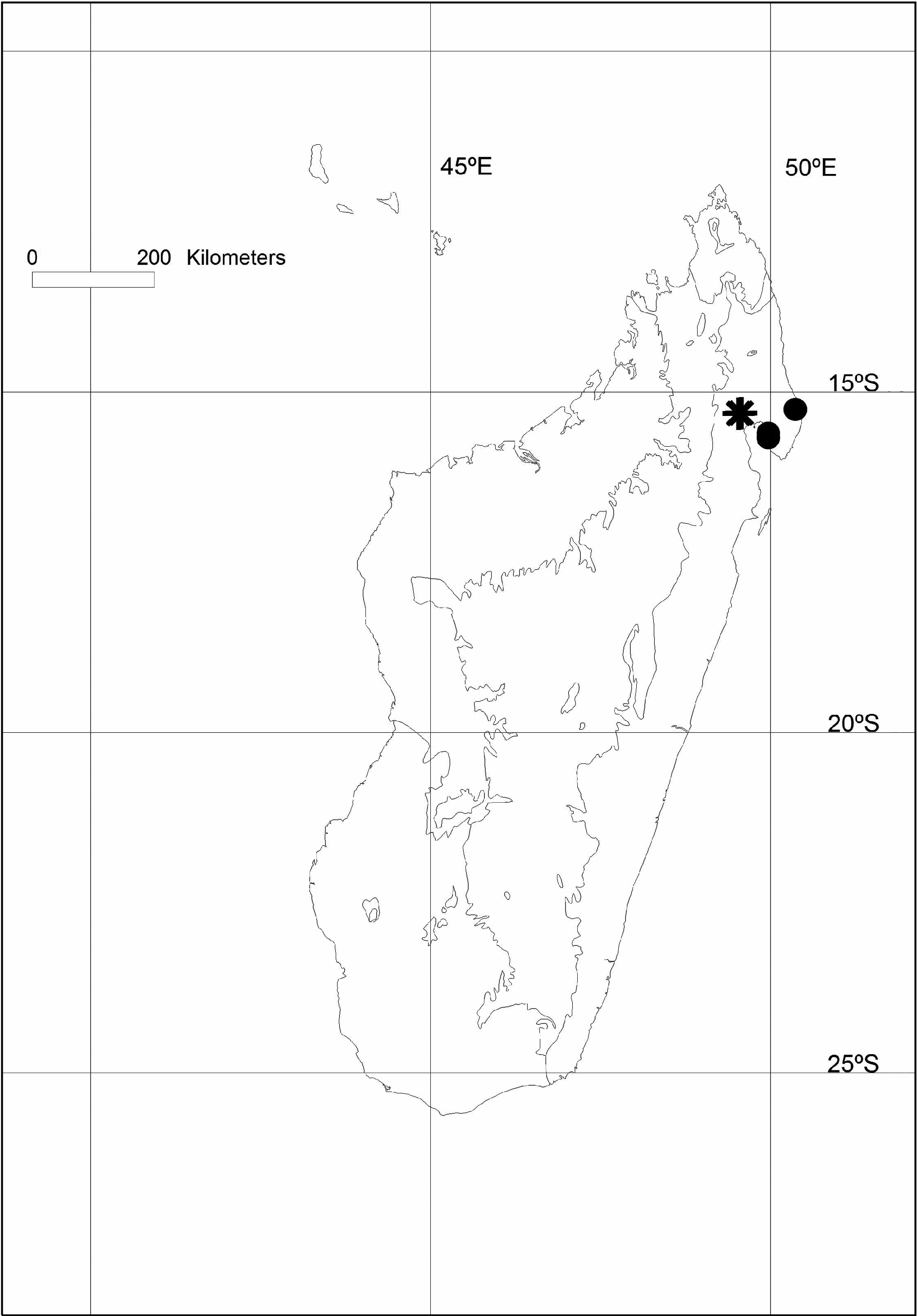