Diagnosis. Strumigenys caiman   can be distinguished from congeners in the nitens   group by the dental count of six. This species is closely related to S. nitens   and S. hubbewatyorum   , but can be distinguished by the following additional characters: inner mandibular margin with two teeth; apex of mandibles with four teeth vertically arranged: the uppermost two are spiniform, while the lowermost are shorter and triangular ( Fig. 2c View FIGURE 2 ); mandibles longer (MI 38–39 vs. 31–33 in S. nitens   and S. hubbewatyorum   ); antennal scape is shorter (SI 56–60 vs. 61–74); mesosoma slightly more compact (WL 2.1–2.2 times PW vs. 2.3); eye smaller, less than or equal to the maximum width of the antennal scape. The following characters separate S. caiman   from S. zemi   and S. convexiceps   : mandibles relatively long (MI 24–29 in S. zemi   and S. convexiceps   ), petiolar node narrow in dorsal view, approximately half the width of postpetiole; mesosoma relatively elongate (WL 1.7–1.8 times PW in S. zemi   and S. convexiceps   ).

Worker description. Adapted from the description of Pyramica nitens in Bolton (2000)   . Mandibles in full face view and at full closure elongate-triangular and strongly tapering apically; MI 38–39. Extreme apices of mandibles alone engage, and a broad subovate gap is present between them through which the broad labral lobes are visible. Inner mandibular margin with two small conical teeth whose apices are widely separated at full closure; the first about one-third of the margin length from the base, the second about two-thirds the way along the margin. Apices of mandibles with a more or less vertical series of four teeth, the upper two longer and spiniform, the lower two shorter and triangular, giving a total dental count of six (see Fig. 2c View FIGURE 2 ). Clypeus and upper scrobe margins have fine faint longitudinal striolate sculpture, traces of which are also present on the cephalic dorsum between the frontal carinae. Antennal scapes long: SI 56–60. Lateral margins of the head roughly parallel and the posterior margin shallowly concave in full-face view. Dorsum of head with elongate, spatulate setae which curve toward the midline. Compound eye small: diameter less than or equal to the maximum width of the antennal scape. In profile view, dense punctate sculpture present between the compound eye and the postbuccal impression.

Distribution and ecology. Known from two localities in Cuba, both of which were lowland mature coastal forest in south-central Cuba ( Figure 9 View FIGURE 9 ). The holotype worker and two paratypes were collected from leaf litter extracted in a Berlese funnel.

Taxonomic notes. Originally described in Bolton (2000) as S. nitens   , this species differs from the original description and illustration by Santschi (1932); see Fig. 2c View FIGURE 2 and the taxonomic notes for S. nitens   below.

Etymology: a small ant with long mandibles armed with many slender teeth, this species is reminiscent of the crocodilians of the genus Caiman. The name is a noun in apposition. 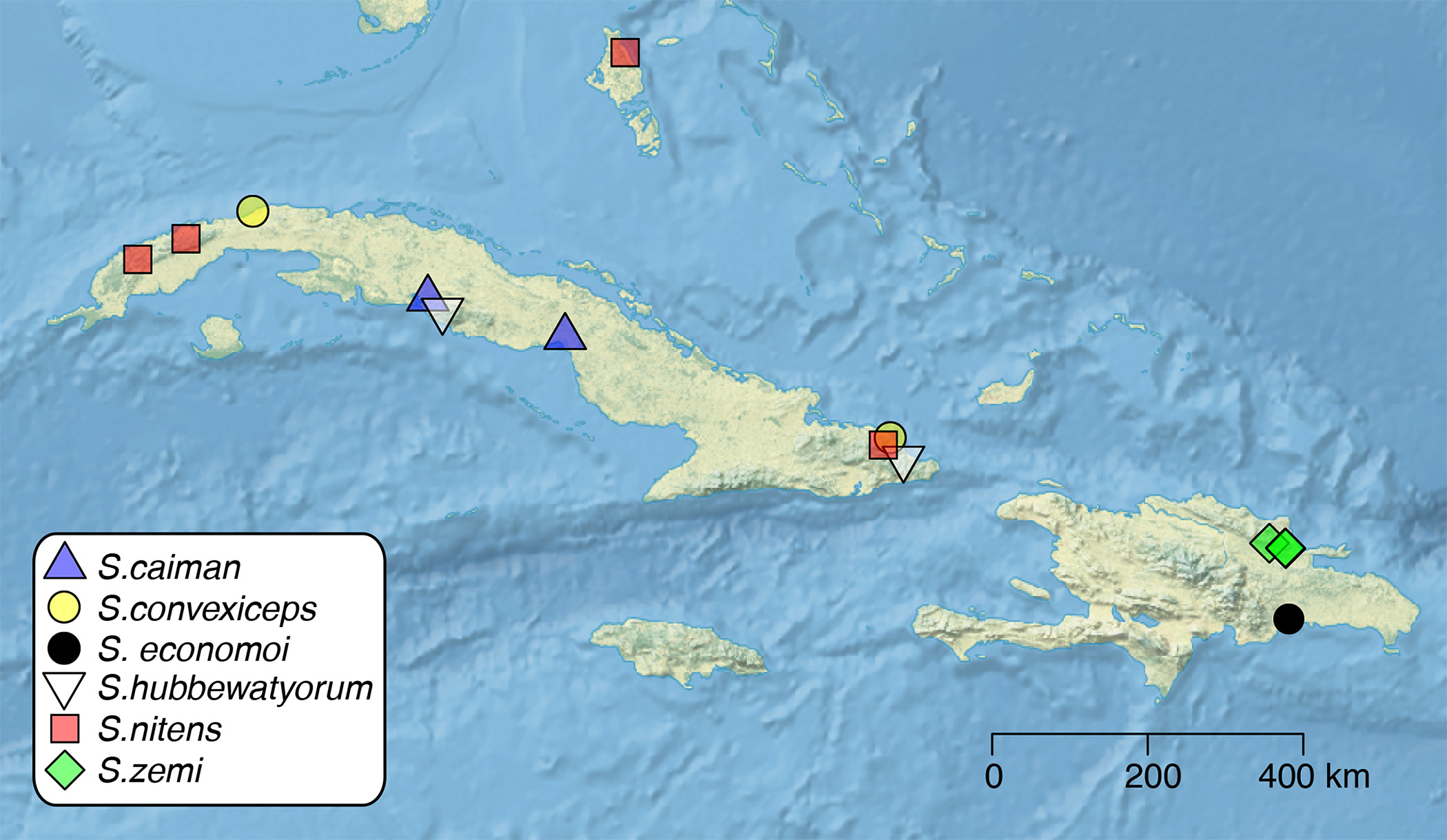