Diagnosis. A. mizzou   is considered to be a new species because the antennae of both the apterous and alate viviparae are five-segmented and the ultimate rostral segment has no accessory setae. The dorsal abdomen has sclerites and the cuticle is strongly reticulate. The secondary sensoria of alatae are arranged in a single row. Both apterous and winged viviparous females are black in life.

Biology: Biological observations were first made on A. mizzou   in 2005. The new species was not observed again until 2008 and was subsequently found in 2009, 2010 and 2011. It was not found on other Hypericum   species growing on the campus of the University of Missouri, such as H. calycinum   and a hybrid species H. “Hidcote”.

Etymology: This species is named after the nickname for the Columbia campus of the University of Missouri, “ mizzou   ”.

Discussion: All collections of this species have been made in early spring and initially it was thought that A. mizzou   might be the fundatrix morph of A. hyperici   . However the color, in life, of both aphids observed on the same host plant, H. kalmianum   , and at the same time in the field is different. Both species are dusted with wax but A. hyperici   has a reddish body color while A. mizzou   is black ( Figure 8 View FIGURE 8 ). It also is found primarily on new terminal growth and stems rather than on the underside of leaves that is the usual feeding site for A. hyperici   . Further research needs to be focus on where this species spends the remainder of the year since its populations disappear from Hypericum   by early summer. In contrast A. hyperici   can be found on its host plant throughout the growing season.

Phylogenetic analysis: An analysis was performed using EF 1 -α sequences alone and combined with COI, to test the relationship of A. hypericiphaga   to A. hyperici   and A. mizzou   ( A. hypericiphaga   sequence was obtained from GenBank, accession number EU 358915 View Materials ). Pairwise distances for COI and EF 1 -α were calculated using the Kimura 2 Parameter distance model ( Kimura 1980) in PAUP 4.0b 10 ( Swofford 2001). PAUP was used to generate Neighbor-joining trees to graphically represent the distance between sequences.

Using COI, pairwise sequence divergence between A. hyperici   and A. mizzou   is 3.2 %. Foottit et al. (2008) cite numerous examples with intraspecific sequence divergence of less than 2 % in Aphis   and other genera. Values of pairwise distances for the nuclear gene EF 1 -α are more conserved ( Table 3 View TABLE 3 ). Pairwise comparisons using this latter gene between the morphologically closely related species A. hyperici   and A. mizzou   is 0.8 %, and of these two species to A. hypericiphaga   is 2.9 % and 3.3 % respectively. Interestingly, A. hypericiphaga   appears to be more closely related to A. gossypii   (0.9 % EF 1 -α) than to the native American species included in this study ( Figs. 3 View FIGURE 3 and 4 View FIGURE 4 ). Graphical representation of the Kimura 2 parameter distances of concatenated genes for all taxa, with the exception of A. hypericiphaga   , indicates that A. hyperici   and A. mizzou   share the same clade as A. pulchella   and A. fabae   ( Fig. 4 View FIGURE 4 ). 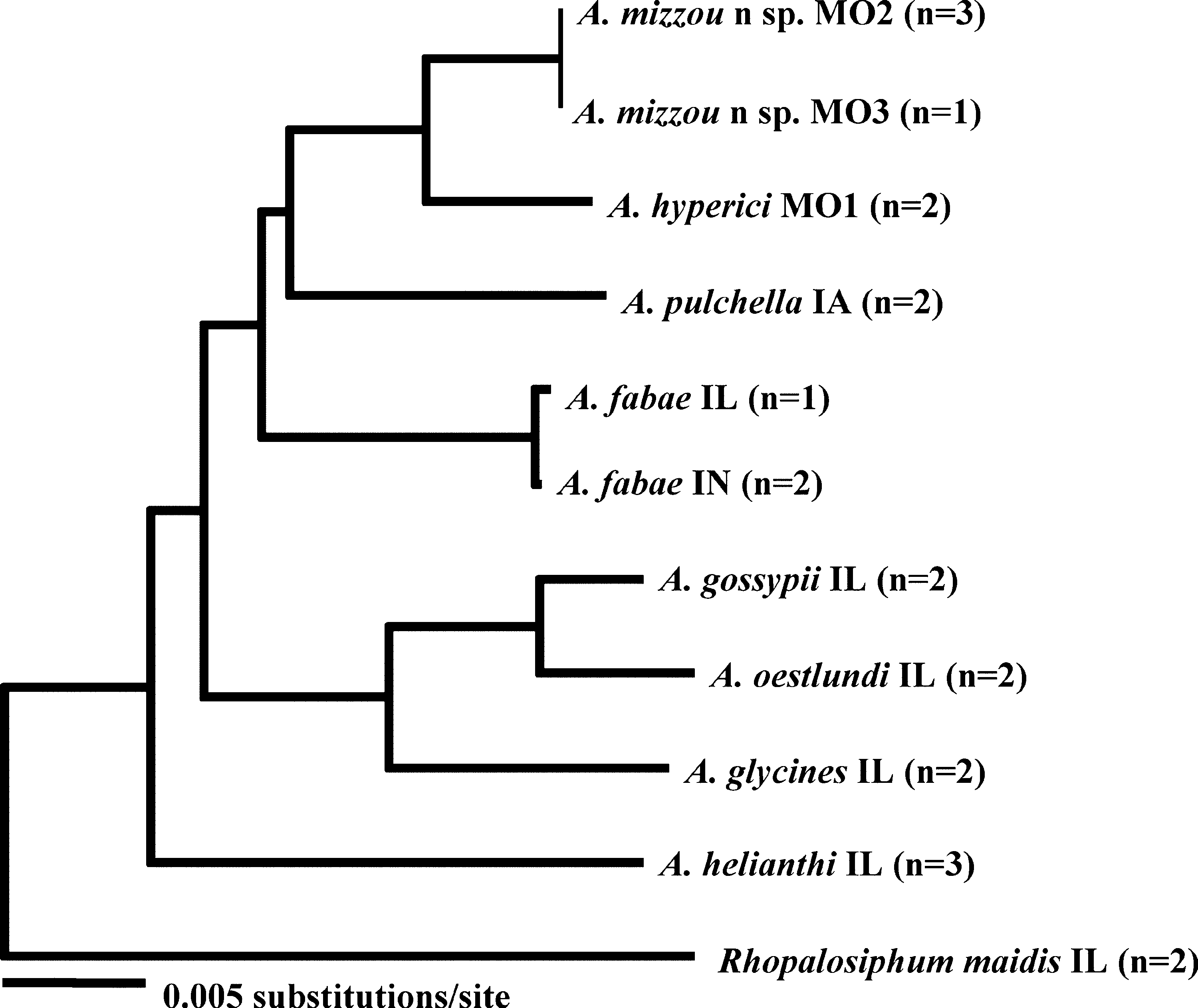