Paratypes. 12 males, 9 females, 2 juveniles. Same locality, date and collectors as holotype. All in ZDEU collection except 6 (including the cleared and stained specimens for bone study) in the O. Arribas scientific collection.

Derivatio nominis. The subspecies name is feminine and means wonderful, amazing, unique and miraculous in Latin. The name refers to its vivid and beautiful coloration in respect to other D. rudis   subspecies.

Diagnosis. A Darevskia rudis   is characterized by having rostral and frontonasal plates either in contact or separated (in contact in 50 % specimens). Supraciliar granula almost always in an interrupted row. Masseteric plate longer than the tympanic one, separated only by a single row (rarely more) of scales. Tibial scales moderately keeled. Relatively high (for D. rudis   ) values for dorsalia, circumanalia, and relative anal-plate size. Relatively low values for femoralia and hindlimb length as well as short head. Postfrontal and postorbitary subequal (or postfrontal only slightly longer than postocular). Interclavicle cruciform, with tips not incurved.

Description of the holotype: An adult male. Tail autotomized. Fixed with ethanol and formaline. Conserved in alcohol (ethanol).

Coloration and pattern (in alcohol): Dorsal tract greenish-gray, with black or dark brownish (more towards sides) dark pattern. Pileus, especially in its hind-half, with medium-sized dark spots, most being well defined and others fainter. Vertebral (occipital) dark band composed of transversal, relatively narrow spots, sometimes decomposed in two or more independent spots at each vertebral side. This band does not occupy the entire dorsal tract, but leaves narrow areas without dark pattern along this band and the lateral (temporal) bands. This band continues along the dorsal part of the tail basis. Lateral (temporal) bands extend from the temporal area of the head along the sides until the tail. The upper edges of the lateral bands very scalloped (irregular, serrated), encircling round whitish spots that give the band a slightly reticulated aspect. The lower limit is more faint and difficult to discern. The belly is whitish with slight traces of the yellow color that it has in life. No spotting on the belly, either in the gular or submaxillar area.

Intrasubspecific variation. Descriptive statistics and variation range of the morphometric and scalation characters are given in Table 3 a–b. Rostral and frontonasal plates can be in contact or separated. Supraciliar granula almost always in a clearly interrupted row. Masseteric plate is larger than the tympanic one, both separated by only a single or more rarely two rows of scales. Tight scales are moderately keeled.

Specimens of the type series show variations in the dorsal pattern. Adult males can have the vertebral band dots less well individualized and transversal, but more irregular and interconnected. In others, the vertebral band can be totally separated into two paravertebral rows of dots (n. 19), with a clear (background colour or slightly darker) stripe between them. One male shows a vermiculated dorsal tract and two dorsolateral stripes, more clear than the general dorsal tract, only distinct in the first half of the dorsum (n. 11). In life, lizards show diverse tones of greens (green, malaquite green, grass green) with blue axillar occelli and abundant blue points in the outer ventrals, both in males and females ( Fig. 6 a View FIGURE 6. a –b). Females are very similarly patterned to the males. Usually as the holotype, some more irregular. Also two paravertebral rows (n. 16).

Young specimens are basically similar to adults but with less contrasted patterns and less vividly green tones (greenish brown, brownish and brownish-gray) with whitish or yellowish axillar occelli. Undersides are unspotted in both sexes and subadults. In life, the underside is yellow in both sexes, occasionally with white throats. The upper side of the tail is greenish brown or brownish gray.

Habitat and ecology. The specimens were captured under stones on slopes of a hill covered by grass vegetation. The altitude at which the sampling was conducted was 2550 m a.s.l. The specimens were collected during sunny conditions and at temperatures between 15 and 22 ºC. The collection locality was close to a stream fed by snowmelt that is habitat of Rana macrocnemis Boulenger, 1885   . There are no tree formations on the habitat, which includes grass such as Carex glauca, Geranium   dissectum, Campanula tridenta and Veronica gentianoides   .

Distribution. Few sites are known. Currently known from the higher parts of the Kaçkar mountains (Ovit Pass and surrounding areas) above 2000 m, in alpine environments with wet meadows and rocks. Probably a more extended range in these mountains, perhaps also at lower altitudes in concrete habitats. 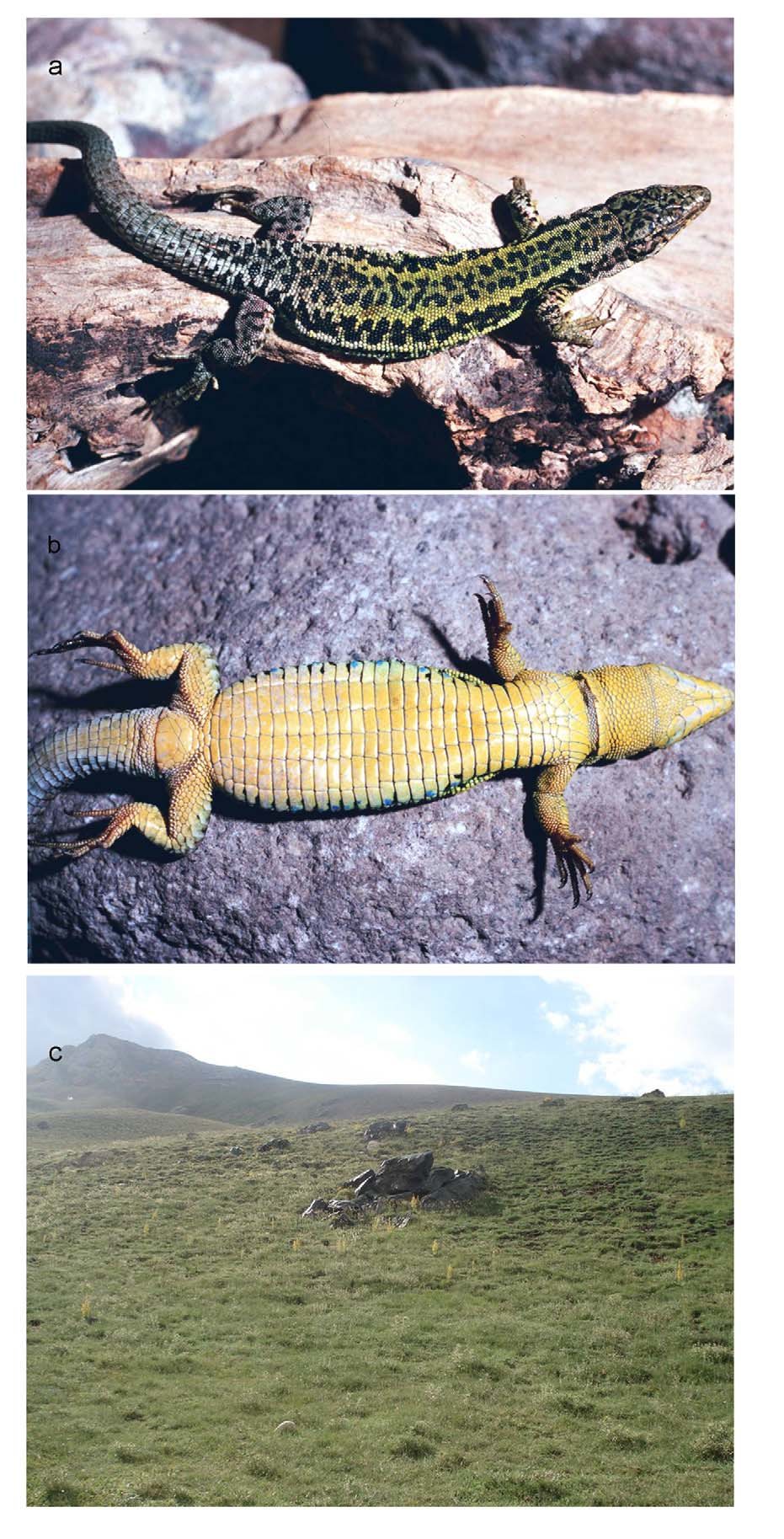