Remarks. The attribution of this form to P. andrei   , originally found in North Korea, has a somewhat arbitrary character although it almost fully fits the original description. Unfortunately, Weiner & Najt (1985) did not describe chaetotaxy of P. andrei   , just said that it is « classique, n’est pas figurée » and up to now it has been only known that dorsal sensilla in this species are 3.5–4.0 times longer than ordinary setae and there are 4+4 setae on Th. I (see Remarks to P. wandae Gao, Yin & Palacios-Vargas, 2008, p. 352   ). Fortunately the types of P. andrei   are still available for examination (ISEA, Poland) which has been done by W.M. Weiner at our request. This study showed that the dorsal chaetotaxy of the Korean types is slightly less complete than in the specimens studied by us, although it is within the range of variations characteristic of the latter. Thus, setae m3 are absent on Th. II–III in the types whereas it usually present in our specimens, at least on Th. III. The types of P. andrei   also lack setae m4 on Abd. I–III. Small differences are also observed in the ventral chaetotaxy and in the number of setae on leg segments. Nevertheless, all this does not go beyond the usual variations inherent in many species. Seven dorsal sensilla on Ant. IV mentioned in the original description proved to be a mistake. Of course, the existence of several similar species in the region cannot be ruled out, but in practice it is very difficult to distinguish between Siberian–Far Eastern and Korean individuals. As a result, we currently prefer to regard them as conspecific.

There is highly possible that this very form was described as P. cf. subcrassoides Mills, 1934   from Alaska by Fjellberg (1985) and was noted in the Eastern Palaearctic from northeastern Europe to Chukotka as P. sibiricus Rusek, 1991   by Babenko & Fjellberg (2006). The latter species, described on material from the vicinity of Lake Baikal, also has 4+4 setae on Th. I and labium with four proximal setae and without seta L. According to the original description the chaetotaxy of P. sibiricus   is similar to that in our specimens being only slightly less complete which can be explained by the small size of the types (0.9 mm vs «up to 3.3» in our specimens). The same reason can probably explain other existing differences: only five sensilla on Ant. IV, 11 labral setae and the absence of extra setae in the interocular area. Some time ago, two specimens (paratypes?) from the type series received from J. Rusek have been studied by us. Unfortunately, both of them turned out to be juveniles, which did not allow adding much detail to the original description. Nevertheless, a high similarity between P. sibiricus   and P. andrei   is obvious and in our view the former may well be a junior synonym of P. andrei   although additional studies of topotypic specimens of P. sibiricus   are needed for certainness.

Distribution. This species, apparently, is the most widespread form of the genus Pseudachorutes   in the eastern Palaearctic, with the Kanin Peninsula being the westernmost point of its range, and Alaska the most eastern. 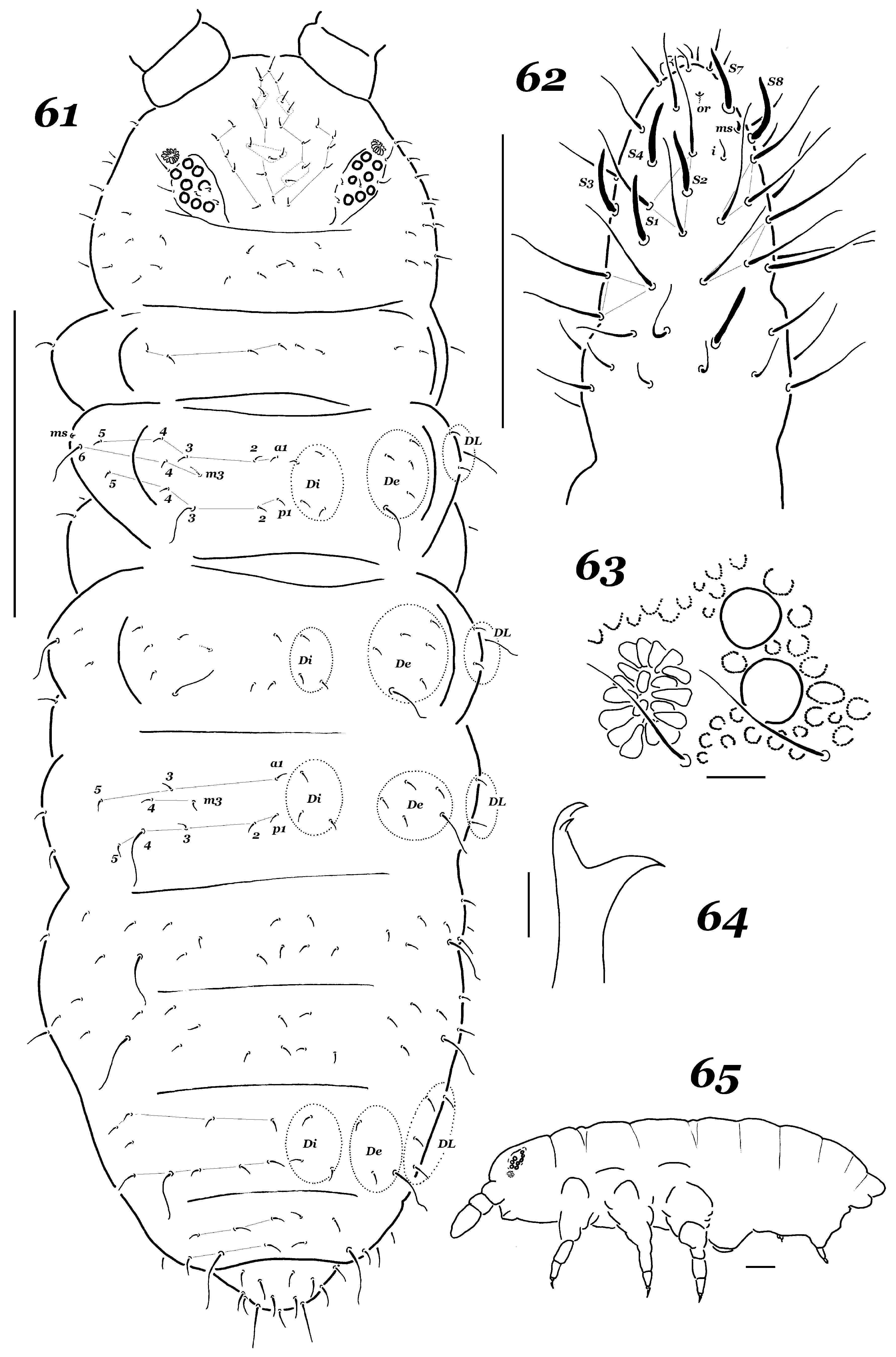