Head wider than pronotum (holotype: 2.9 mm wide; type series: ♀♀ 2.2 to 2.7 mm, mean: 2.53 ± 0.11 mm), glabrous, metallic green sometimes with coppery sheen, longitudinally wrinkled with circular wrinkles on the frons typical for Cylindera  . Genae glabrous, metallic dark blue. Two supraorbital setae, one at the anterior margin of the eye, one at the widest point of the head between the eyes. Antennae reaching approximately to the end of the first third of the elytra, segments 1 to 4 glabrous, metallic green with coppery reflections, segments 5 to 11 light brown and densely setose with short, thin setae. Scapus with one long apical seta, antennal segment 3 with 6 shorter setae (holotype) apart from the longer apical setae.

Legs metallic green with dark coppery reflections except for the dark brown tibiae and trochanters, fore and middle femora with sparse white setae along the anterior and posterior margins and on both sides in between, hind femora without setae between he margins on the side that faces the abdomen. Fore and middle trochanters with a single, long subapical seta. Basal three tarsomeres of forelegs in males broadened.

Elytra elliptical, slightly dilated in apical third in females, more parallel in the holotype male (length: holotype: 6.2 mm; type series: ♀♀ 5.5 to 5.9 mm, mean: 5.7 ± 0.08 mm; width (at broadest point): holotype: 3.7 mm; type series: ♀♀ 3.3 to 3.5 mm, mean: 3.44 ± 0.05 mm; width (at the tip of the scutellum): holotype: 3.1 mm; type series: ♀♀ 2.75 to 2.9 mm, mean: 2.81 ± 0.03 mm). Scutellum dark coppery metallic. Elytral disc dark blackish grey with dark coppery to anthracite metallic sheen, with a faint black band on each elytron reaching curved from the humeral (shoulder) spot over the basal spot (endpoint of the not present apical lunule) and the end tip of the middle band towards the apical lunule (recognizable as area without metallic sheen), the rest of the elytra covered more or less with small bright turquoise to blue metallic dots, with a line of large bright turquoise blue dots along the suture and a group of the same dots at the shoulder. Shoulders prominent with small round maculation. Basal maculation (endpoint of the not present apical lunule) centrally on each elytron at the end of the first quarter variable in size but always present, the middle band reaching straight from a very large marginal spot that is slightly distanced from the lateral margin of the elytron towards the suture near the elytral apex, thinning out towards the middle of the elytron but ending in a clear hook projecting towards the elytral base. The apical lunule is starting at the elytral apex, running along the margin to a spot shortly before the broadest point of the elytron and then projecting in a hook towards the central point of the middle band. Epipleura mid brown. Elytral apex with a clear but short, coppery metallic sutural spine.

The aedeagus generally resembles that of C. germanica germanica  in shape ( Figure 23View FIGURES 20-23). The aedeagus of the holotype is 3.3 mm long and embedded in Xylol and therefore bleached. Due to the previous embedding of the genital of the only accessible male, we refrained from extracting the genital and from inflating the internal sack for the sake of conservation of the holotype specimen.

Holotype glued onto yellowish cardboard mounting board, pinhole from previous mounting on right elytron, centrally at the end of the first fifth of the elytron, left foreleg lacking all tarsomeres, aedeagus embedded in Xy- lol.

Etymology: The given name originates form the range of this new subspecies, the lowlands along the north coast of the Persian Gulf.

Variability: In the small series of specimens available for study, we detected little variation despite the large geographical range the specimens cover. The elytral maculation is rather conserved and all specimens show a very similar colouration. In some individuals, head and pronotum are more blueish-green metallic, while in others, they have a predominant coppery sheen. Also, while in all individuals the posterior edge of the pronotum is sparsely setose, only the holotype male also shows a sparsely setose anterior edge of the pronotum ( Figures 20 & 21View FIGURES 20-23).

Habitat and distribution: Although the type series is small, the few available records of C. germanica persiana  ssp. nov. show an activity period early in the year in March and April, likely driven by the extremely hot and dry climate during the summer months. Populations of C. germanica germanica  in northern Iran as well as in Turkey however are active later, mostly from May to July.

C. germanica persiana  ssp. nov. seems to be distributed south of the main ridge of the Zargos mountain range in the lowlands along the north coast of the Persian Gulf in southern Iran and probably also in south-eastern Iraq ( Figure 1View FIGURE 1). All specimens investigated originate from river valleys.

Most of the specimens investigated by us were previously studied but assigned to Cylindera descendens  (e.g. Mandl (1959), Gebert (1992)), which is clearly a misidentification due to their glabrous abdominal sternites. By contrast, specimens of C. germanica  from Amara / Iraq mentioned in Horn (1927) were identified as C. germanica martorelli ( Kraatz, 1890)  (described as a colour morph of the Iberian C. g. catalonica  [Beuthin, 1890] by Kraatz (1890) and therefore a junior synonym of C. germanica sobrina  [Gory, 1833]). The elytral pattern of C. germanica martorelli  is similar to that of C. germanica persiana  ssp. nov. but specimens of all Iberian populations, including individuals of the before mentioned populations, lack the setae at the hind margin of the pronotum. We therefore expect the individuals from Amara to have been misidentified by W. Horn and actually belong to C. germanica persiana  ssp. nov.. Another record of C. descendens  from Kusha / Hormozgan province listed in Tschitschérine (1903) may also refer to C. germanica persiana  ssp. nov.. These populations south of the alpidic mountain ranges have clearly been overlooked so far. As there is a clear lack in collections from Syria, Iraq and south-eastern Turkey, we cannot exclude the possibility of further populations in this region. 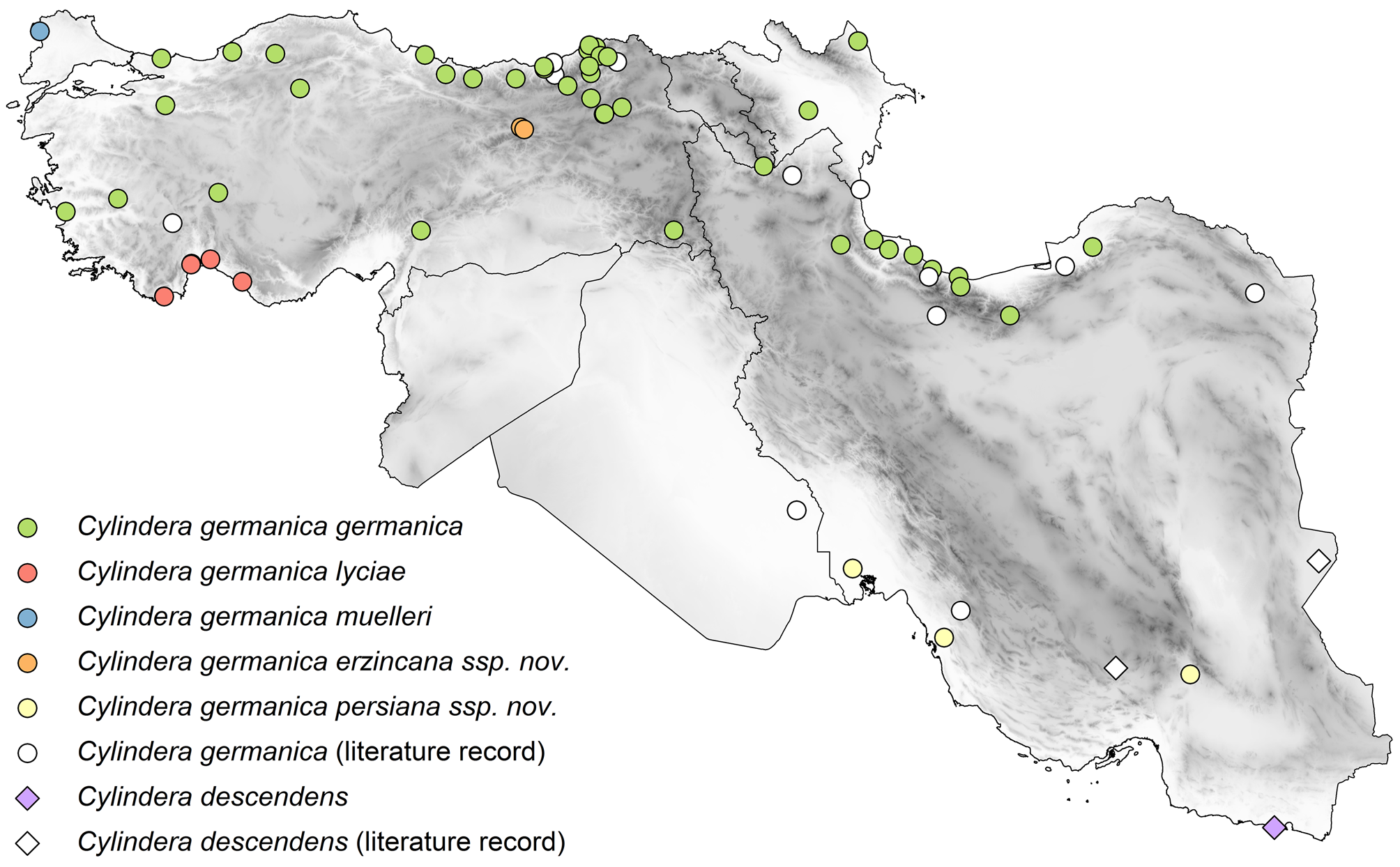 FIGURE 1: Distribution of Cylindera germanica (Linnaeus, 1758) in the Middle East. 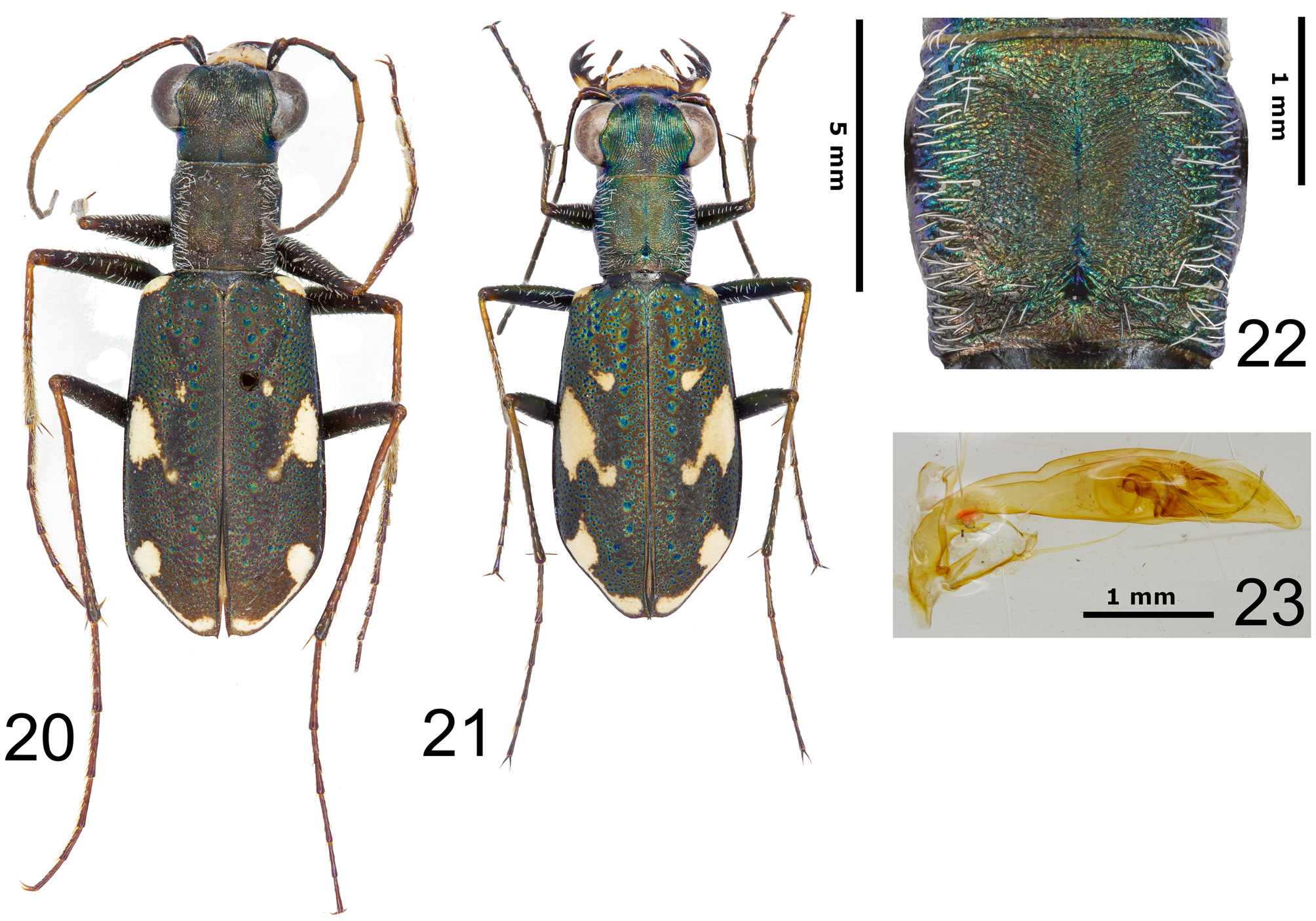