Male. Head: Fastigium of vertex narrow, less than half the width of scapus, narrower than in P. t u rc i cu s. Thorax: Pronotum ( Fig. 4 View FIGURES 1 – 7 A, B) is comparatively long, slightly raised in the metazona (but stronger than in P. turcicus ). The metazona is slightly widened and in dorsal view the pronotum resembles that of P. turcicus (see Fig. 3 View FIGURES 1 – 7 A, B). Dorsal margin of pronotum in profile is straight or slightly concave. Auditory spiracle very small, its diameter smaller than the width of apical limbs of palpi. Tegmina typical for this group. The stridulatory file has comparatively sparse pegs, smoothly but fast getting bigger from the apex to 1 / 5 th to the base and become largest in the middle of the file. The stridulatory file has 86–104 teeth (including about 30 very small teeth in the apical part of the file)—more than in the species of Subgroup 1 ( Kaya et al. 2012) and less than in those from Subgroup 3 as defined by Kaya et al. (2012). Fore femur slightly longer than pronotum. Hind femora lack ventral spines. Abdomen: Margins of abdominal tergites straight or slightly convex. Male cerci have characteristic shape ( Fig. 4 View FIGURES 1 – 7 C, D, 17 C, 21 C) and thus distinction of males may be based on this character. The cerci are not distinctly widened at the base, and are gently curved along most of their length. The cercal tip is lancet-shaped and down curved with both the internal and external margins covered with small black teeth; the inner and outer rows are almost equal in length, bearing respectively 4–8 and 6–13 teeth, separated by a similar in size medial tooth. Subgenital plate ( Fig. 4 View FIGURES 1 – 7 E) short, triangularly narrowed after its middle, with a narrow, slightly concave apex, extending over the tip of cerci, smoothly triangularly tapering to a narrow, slightly concave hind margin. Colouration: General colouration typical for the group, usually pale-green. Vertex, pronotum (except metazona), tergites and legs densely spotted in coarse dark brown dots. Antennae densely annulated with dark rings. Head and pronotal dorsum with two lateral and a medial thin pale (almost white) stripes, the lateral ones broadening backwards in the metazona; such stripes but intermittent and greenish may be observed on abdominal tergites, where they border from both sides the lighter dorsal surface of the tergites. Lateral sides of metazona with two big reddish-pink spots separated or almost touching each other at the hind margin of metazona. Tegmina yellow with dark brownish-black stridulatory area. Femora and tibiae green or yellowinsh getting rusty brown or reddish apically. Abdomen green with the first and sometimes all tergites with a black spot mediobasally. Cerci and partly the 10 th abdominal tergum may be rustyreddish or cerci are yellowish. Cerci with black teeth and rarely the apical fourth of cerci is black.

Female. Body shape and colouration as in the other representatives of the Subggroup 2 ( Kaya et al. 2012), mostly resembling P. t urc i c u s. Ovipositor long for the group (9.2–10.1 mm), similar in length to the taxa of Subgroups 1 and 2 (l.c.). The lamellae (lateral processes of the base of the lower ovipositor valve) are short and laterally expanded with obtuse triangular lateral corners; the pit formed between lamellae and gonangulum is shallow, moderately wide.

Bioacoustics ( Table 2 View TABLE 2 ). Male calling song ( Figs 17 View FIGURES 16 – 19 A, B, 21 A, B, 24) can be classified as typical for Subgroup 2 being of type 2 (see Kaya et al. 2012) by its resemblance to the song of P. turcicus ( Fig. 22 View FIGURES 20 – 23 A, B) and corresponds to the oscillograms presented on Fig. 161 in the latter study ( Kaya et al. 2012: 58). The song consists of single or sparsely grouped syllables that depending on body temperature may be separated by intervals of 1–2 (25 °C) to over 10 seconds (low syllable repetition rate). The syllables are long—depending on the temperature they last from less than 300 ms to over 1 s. The syllable is clearly arranged into two parts on account of the mean impulse period—a first (early) part consisting of 14–21 sparse impulses (impulse period of 10–90 ms) and a second (late) part of 8–18 dense syllables (impulse period of 2–10 ms). Main song frequencies lie between 21 / 24 and 32 kHz with a peak around 25–26 kHz. In general the song can hardly be differentiated from that of P. turcicus , at the same temperature the average impulse period of the second syllable part being bigger in P. turcicus (at 17 °C over 6 ms in P. turcicus and less than 6 ms in P. warchalowskae ).

Etymology. This new species is dedicated to Prof. Dr. Sci. Elżbieta Warchałowska-Śliwa in recognition of her contribution to the karyology and systematics of the bush-cricket families Tettigoniidae and Phaneropteridae . P.

warchalowskae has been first collected and recognized as undescribed taxon during a field trip via grant N N 303 611738 to E. Warchałowska-Śliwa. 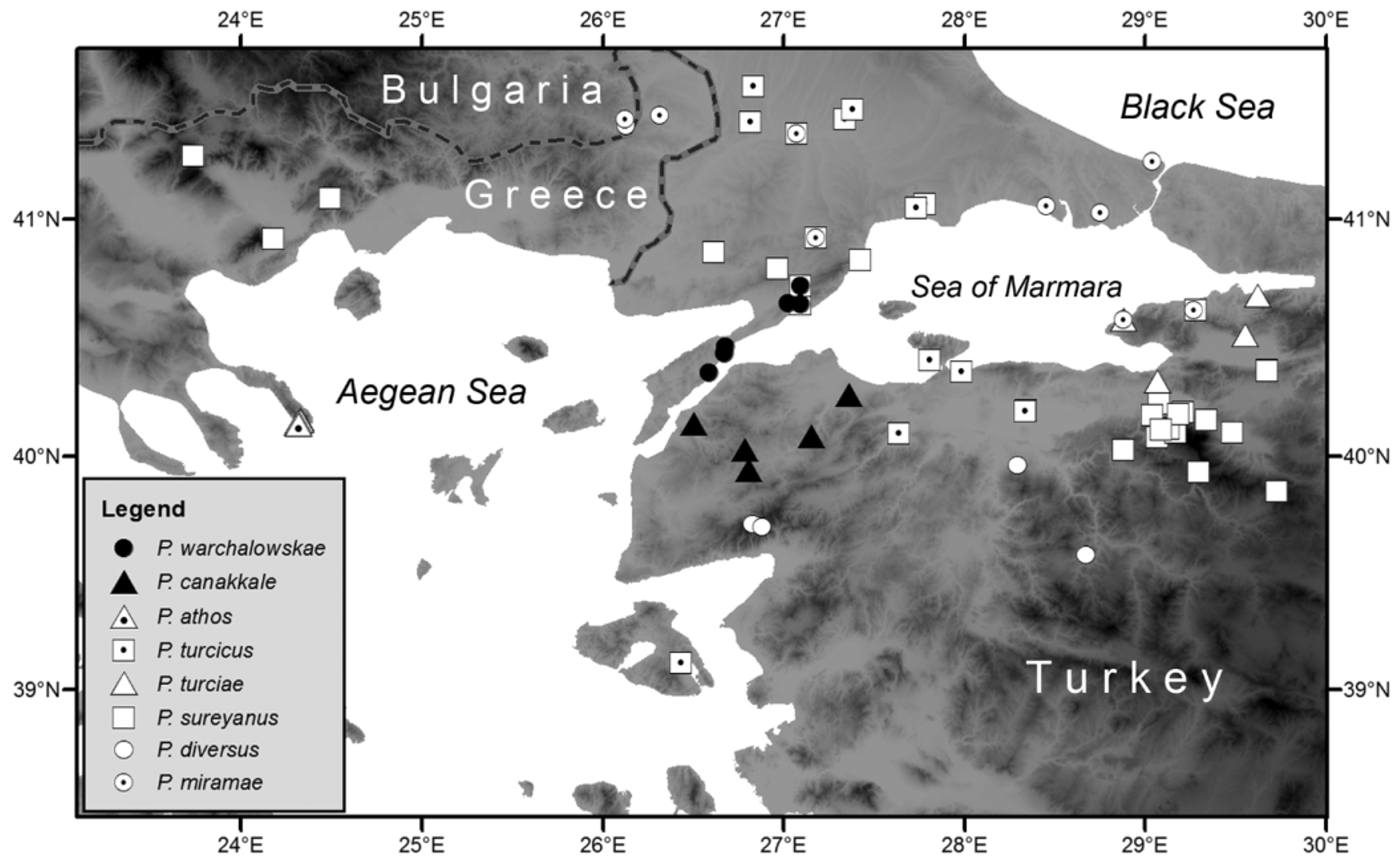 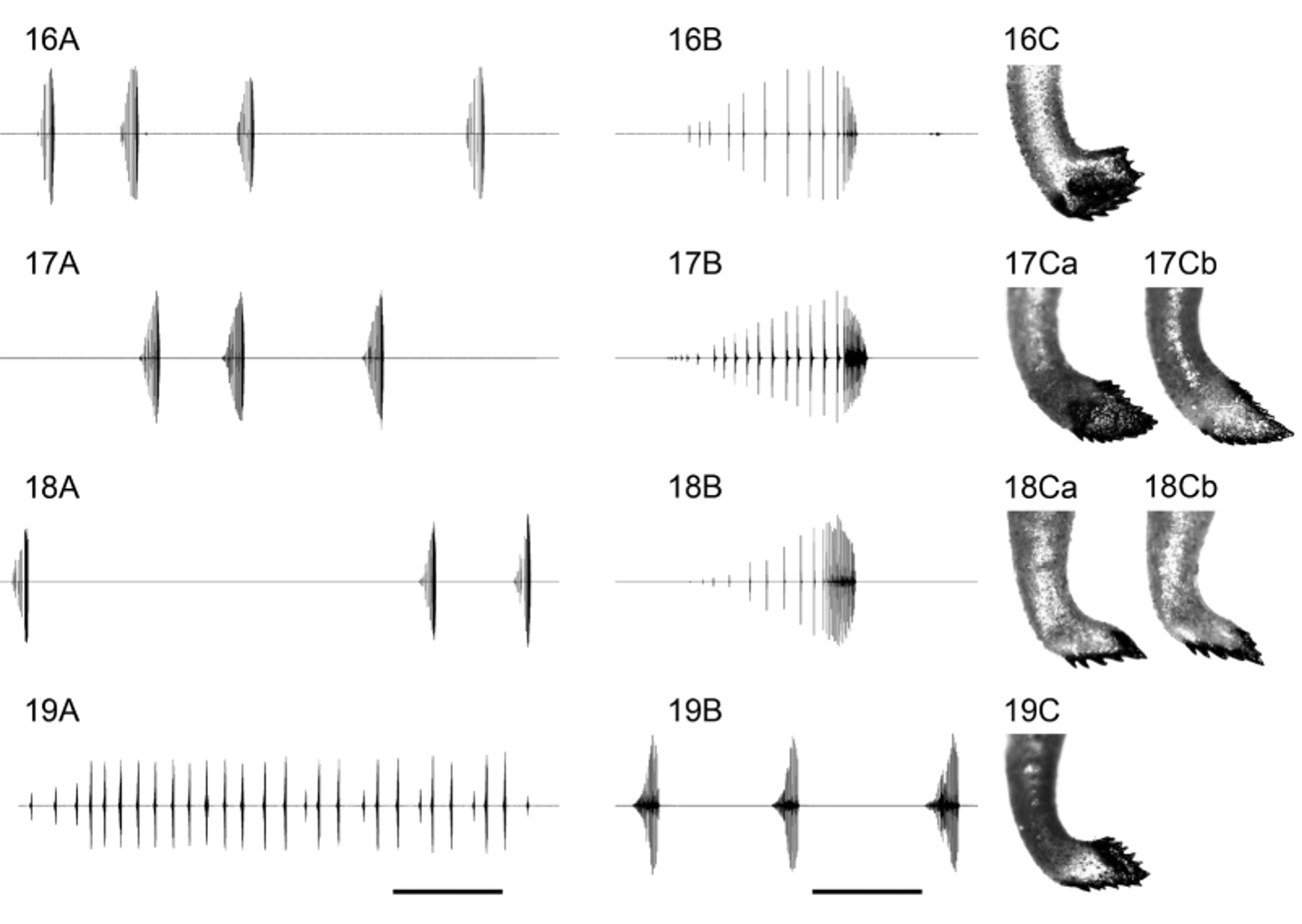 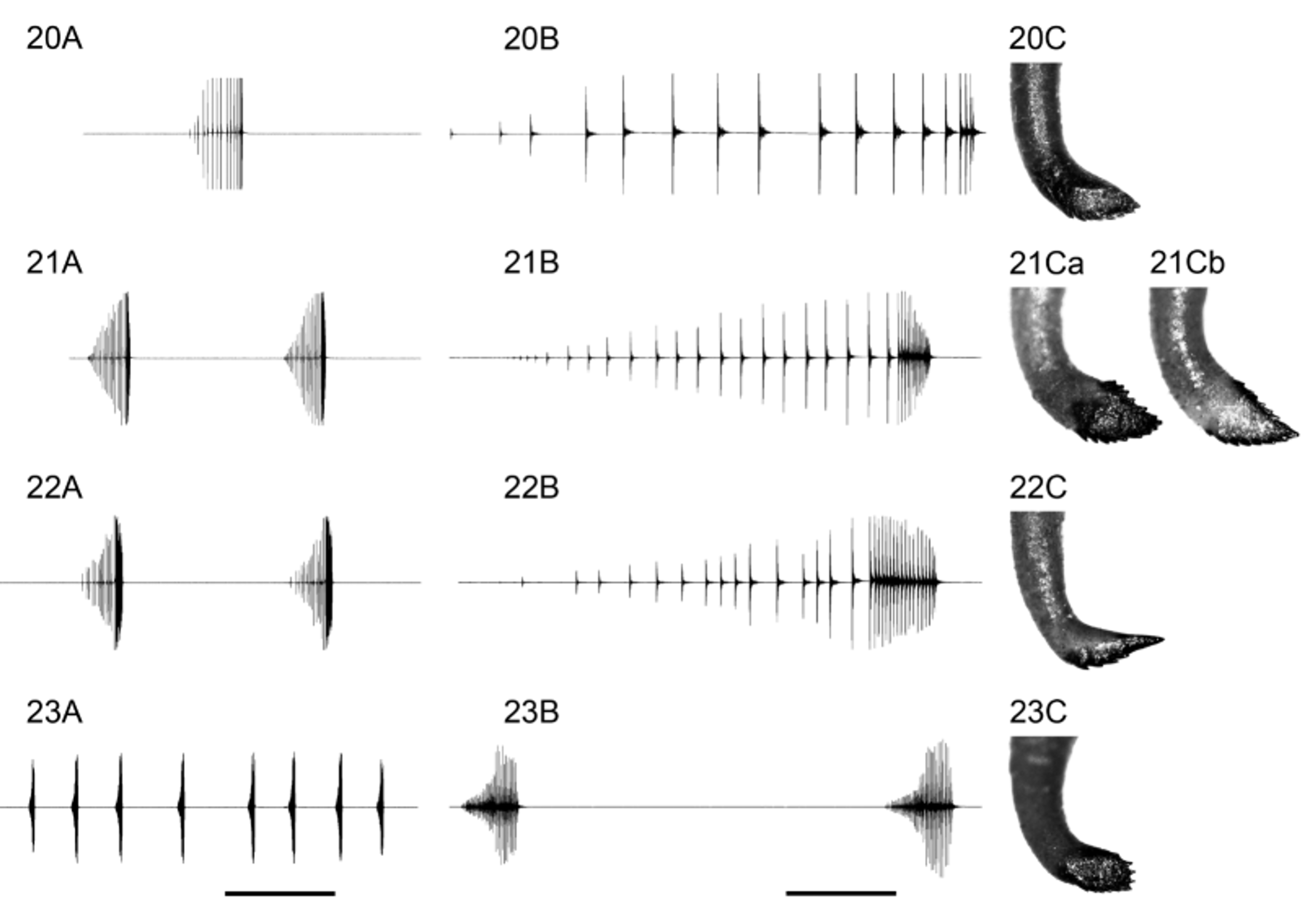 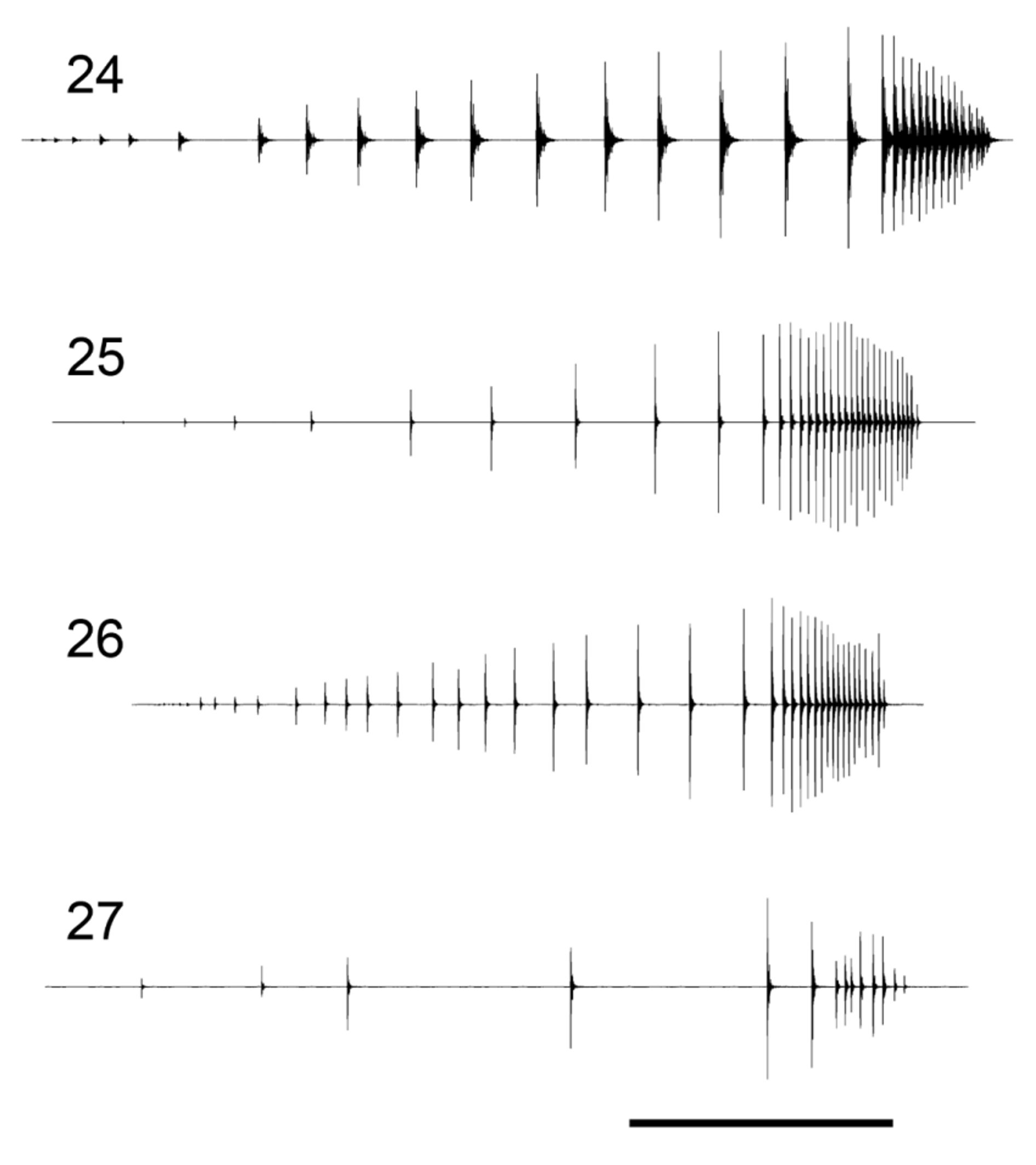